Way back in 2008, I built a LEGO US Army Chinook helicopter. It was one of my first models to be featured on The Brothers Brick, long before I became a contributor. While I do take older models apart every now and then, I kept this one around. It has been sitting on one of my shelves almost unchanged for years. It still looks decent, but LEGO has moved on and so have I. A lot of new parts offer possibilities that I simply didn’t have more than a decade ago. In 2018 I completely rebuilt my Pave Low helicopter, also originally from 2008, using new parts and techniques. Now I have turned my attention to the Chinook. 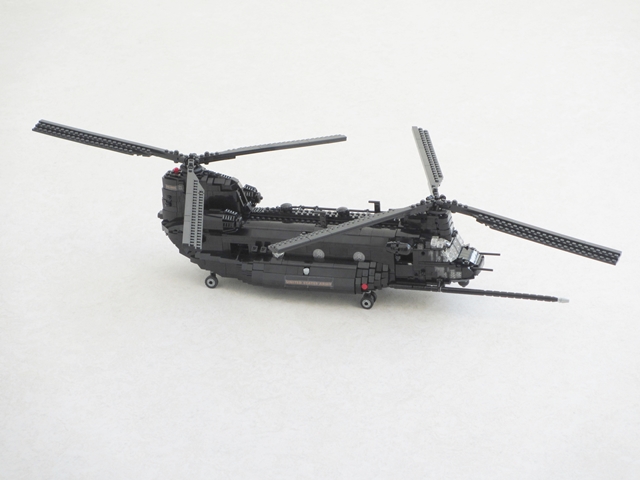 There was a bit of snag, though. I built the original using old dark grey, a color that LEGO stopped making in 2004 because it looked unattractively dirty or muddy. Muddy is great for a military model, and old dark grey was a nice match for the olive drab color of most US Army helicopters. Unfortunately, since LEGO stopped making this color, none of the new parts, such as curved slopes, cheese slopes, and brackets, that are so useful when building aircraft and helicopter models exist in old dark grey. So, I had to pick a Chinook variant in a color in which these are available. 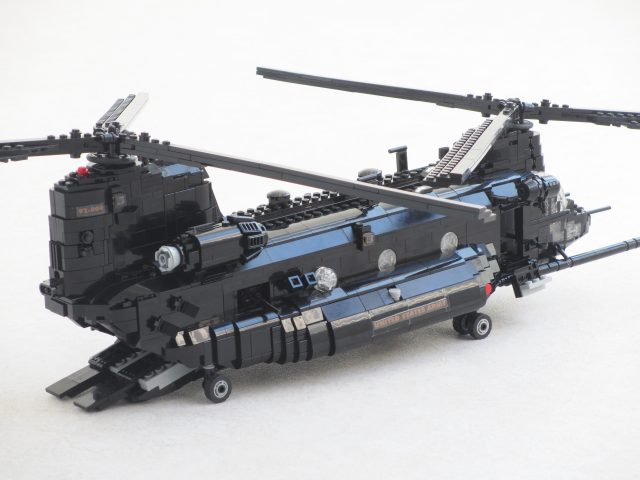 Fortunately, the US Army’s 160th Special Operations Aviation Regiment (Airborne), nicknamed the “Night Stalkers,” has been flying special operations versions of the Chinook, called the MH-47, for decades. Most of these are black, which is perfect in terms of parts. They also have a lot of features that regular Chinooks usually lack, such as much larger extended-range fuel tanks alongside the cabin, an air-to-air refueling probe and radar and laser warning receivers and various other antennae dotted around on the outside. Adding all of those details made this a more challenging and interesting build. The end result looks like an angry beast.