Continuing our series on LEGO organization and sorting, contributor Chris Doyle invites you on a tour of his workspace and processes.

So, let’s start by putting things into context. One of my most vivid childhood memories is lying on a thick shag carpet, watching Battlestar Galactica, and being super frustrated that the clone brand LEGO that my parents had bought for me didn’t have the fine detail I needed to build Colonial Vipers. I remember swearing to myself that if I made it to adulthood, I would buy enough LEGO to fill a room. So, eventually, I did. 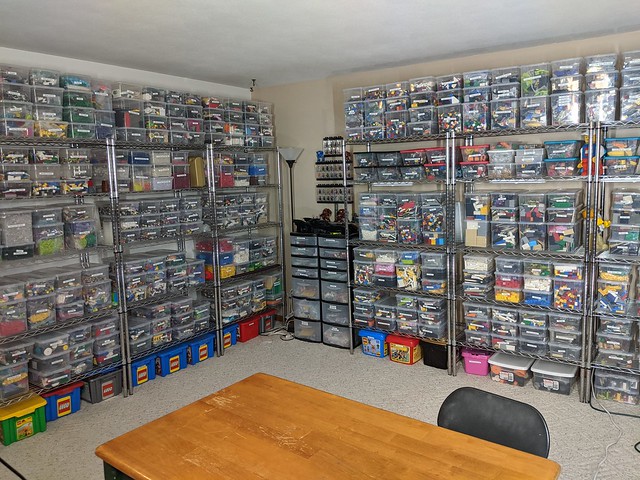 But a collection like this comes at a cost. And I don’t mean just that official LEGO product is on the expensive side. It eats up space, and time, and quite a few additional purchases just to keep things organized. So, in a vain attempt to justify this non-trivial investment, let me show you around and share my sorting process. C’mon. It’ll be fun!

First off, let’s walk through the layout. The majority of the space is dedicated to metal food-service style shelving I found at Target. I picked them mainly due to weight capacity — each shelf is rated for three hundred pounds, necessary when you plan to load them up with (plastic) brick. The majority of those parts are stored in clear shoe boxes, subdivided by ziplock baggies. Like a grocery store, I stock the good stuff at eye level, and the more esoteric stuff on the top shelf. 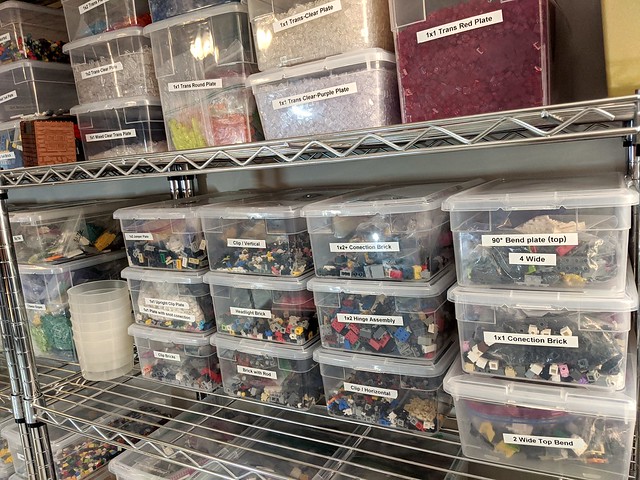 I also have a set of four screw-organizer style tackle boxes hanging on the wall. I use these for high-use parts that I don’t have a ton of. About half are Technic elements, since finding just the right one had always been a chore for me. 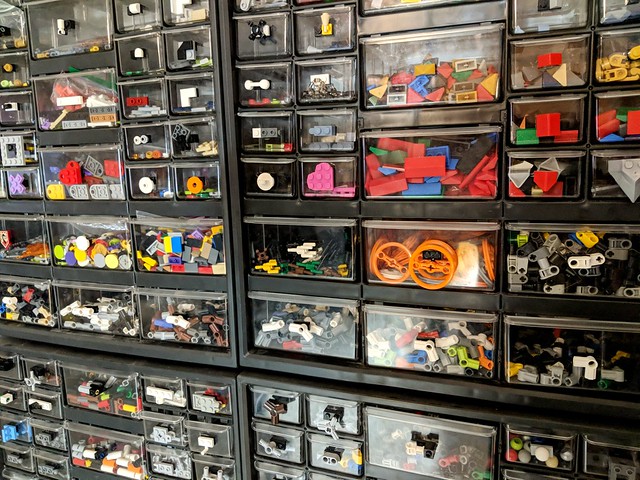 Beyond that, there’s my worktable (an old kitchen table we’d long since replaced), bunch of LED light kits, and the shameful overflow part closet. And a downstairs closet filled with all my unopened sets and tubs full of unsorted brick that I’m slowly working my way through.

So let’s talk about how I do that.

I dedicate at least a few hours to sorting LEGO every week. Some weeks are more successful than others. But normally I spend my Saturday mornings elbow deep in random brick. My process is pretty streamlined at this point. The random bins of brick refill a giant tub in my workspace. Then I rough-sort that brick a gallon or so at a time into four groups: Brick, plate, Technic, and “other.” Each group gets sifted into a set of plastic drawers leftover from an earlier LEGO storage layout. 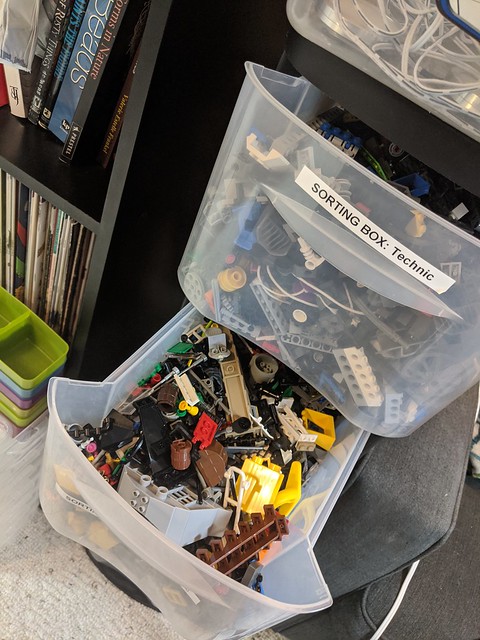 Once a drawer is full, I do a “fine sort” on the parts. I have a bunch of smaller trays that I’ll use to further sub-divide things. Eventually, I’ll have things sorted down to the same granularity that matches what I have in the shoeboxes. All too often, I’ll find that I’ve filled a shoebox or tacklebox drawer to capacity, then I’ll have to divide it up into new boxes or groups. Depending on the volume of a part I have the groups can be as broad as “Misc Car Parts” and as fine as “2×4 Blue Brick”. I have a couple of bins grouped only by color: Transparent Purple, Chrome elements, and Gold elements.

Organizing for my building style

As I mentioned earlier, I try and keep the parts I use most often at eye-level. I also find that once part storage has hit the shape-and-color level, I get annoyed. More often than not, I just need one or two of a part, so I have a shelf dedicated to the fine art of “unsorted yet sorted” parts. These boxes are also really handy when moving from rough-to-fine sort. I can just postpone doing the really fine splits until my “unsorted” box starts overflowing. You can see that I’m going to have to spend some time fine-sorting my 1×4 brick soon, for example. 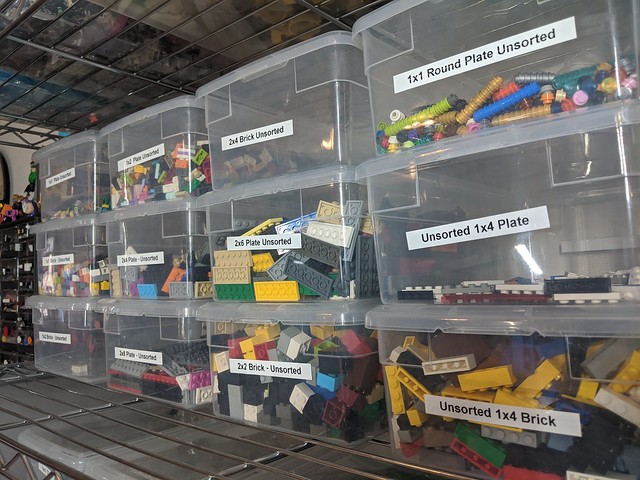 I also try and group things. For example, my plate is set up in rows of steadily increasing size (1×1 to 16×16), with brick in similar sizes on the shelf below it. But even when things are organized well, it’s still a challenge to find parts sometimes.

To make things easier, I’ve found a few tricks that make locating parts easier. The first is pretty obvious: Label everything. I use a cheap label maker to put a text description on the outside of all of my shoe boxes. I put the same text on both short sides of each box, so I don’t have to pay attention to orientation when I’m putting things back on a shelf. It also helps if you can get clear shoeboxes. Being able to see what’s inside without a lot of digging is super helpful.

Tacklebox drawers are harder to see into, though. Particularly when the parts are cast in dark plastic and like to hide at the back of the drawer. My solution? A glue gun and 1×2 plates. Hot glue a plate to the front of each drawer and stick one of the parts onto it. If a given part doesn’t quite fit, grab a modified 1×2 plate (or whatever) and try again. The nicest part is when things need to shift around it’s super easy to change the display part. 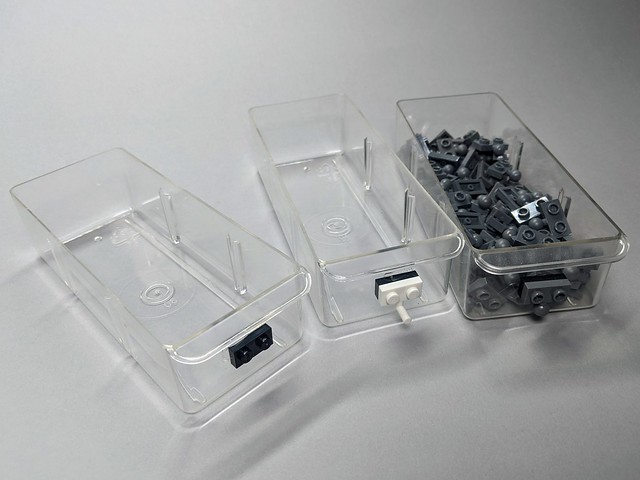 I said clear boxes were a must, but what to do with those opaque LEGO storage bins? They’re still useful. I use them to store my instructions and catalogs. Not only does this help keep them flat, but it also protects them from sun damage. 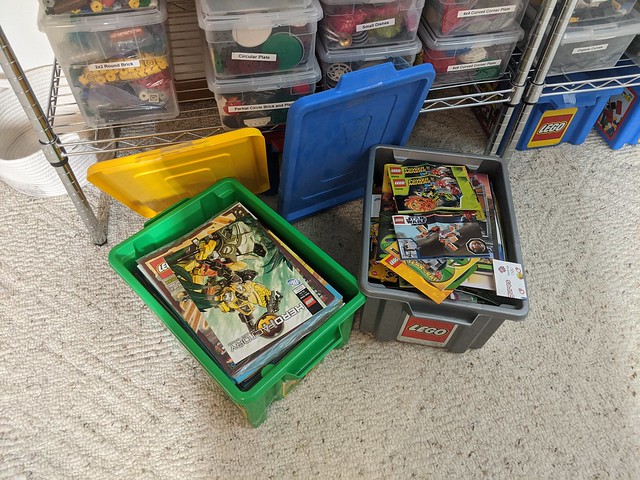 Do you have a favorite sorting hack? Tell me about it. I’m always looking for ways to upgrade things!

Oh, and in all fairness, I should mention that while my parents never bought me LEGO, they did buy me just about every Micronauts toy ever made. They’re generous and loving people. I should probably have just asked them for LEGO. Live and learn.

15 comments on “It takes all sorts of sorts: LEGO organization and me, Chris Doyle [Feature]”