As a kid, I built a lot of model airplanes. I loved gluing them together and painting them, but never liked applying the decals. I read books about military airplanes, too, and played with tiny toy planes. I loved airplanes, at least ones that carried missiles and guns. I’m going out on a limb here, but I would hazard a guess that James Cherry loved airplanes, too, and still does. Why would I guess that? Because he has built an amazing Eurofighter Typhoon airplane out of LEGO bricks. Measuring up at over a meter in length and 73cm across at the wingtips (it’s a European plane, so we have to use metric), this is one beast of a creation, too. The whole thing is tiled an oh-so-smooth, with a custom canopy and nose cone, since The LEGO Group does not manufacture anything close to these specs.

Custom stickers take it to another level, especially in the cockpit. James must have liked putting on the decals. They add details that could not be replicated in brick form, but that does not mean that he has skimped on the brick part. The ejection seat is superb, with all sorts of greebly things that probably have a function (unlike greebles on spaceships that are there just for looks). The joystick looks to be a modified 1×1 round plate with bar shoved into some pneumatic tubing, which means it probably moves a bit, just like the real thing. 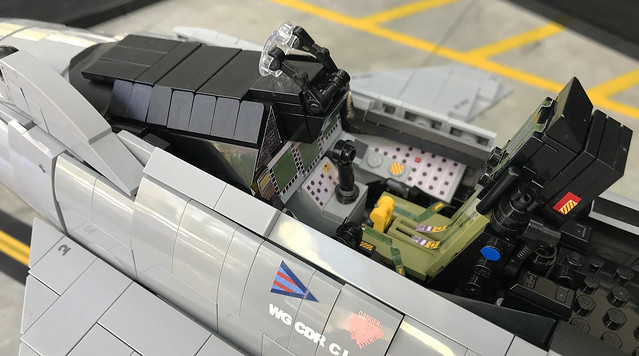 I said I liked planes with missiles, and this one has plenty. There are some air-to-air missiles on there (Meteor and Asraam) plus some laser-guided bombs. Just look how delicately they connect to the pylons beneath the wings. The fins on those blue ones use the classic tile-wedged-between-studs technique, and it looks perfect. That’s how I used to attach the tail fin to my LEGO jets as a kid when I tried making Tomcats and such things with my old Blacktron II sets. Speaking of fins, all the flaps and whatnot, including those canards in the front, move, giving this jet the maneuverability it needs to be superior in the air.

Like this plane? Don’t miss this Tomcat, Phantom, and Corsair, also made by James.