LEGO Education is celebrating its 40th anniversary, and we are exploring the history of this unique division of the LEGO Group. Part 1 presented an early history of LEGO Education, while Part 2 outlined the development of the first LEGO robotics platforms. In our 3rd and final installment, we dive into the story behind the game-changing release of LEGO Mindstorms.

Evolution of the RCX programmable brick

Despite the improvements made in the 1990s, a storm was brewing in 1997 – LEGO Mindstorms, to be exact! Named after Papert’s Mindstorms book, LEGO Mindstorms was the next iteration of LEGO robotics products. The goal of Mindstorms was to provide a programmable brick that didn’t require connecting to a computer to operate a robot. To that end, they produced the RCX (Robotics Command EXplorer) brick.

Development on such a system began in MIT’s Media Lab during the 1980s and, by 1987, the result was a prototype unit molded in gray plastic. Testing with fifth and seventh grade students proved to be promising. As PC ownership began to rise in the 1990s, LEGO became increasingly interested in getting Mindstorms out to the general public. From 1994 through 1996, development took place on the 2nd iteration which came to be known as the “red brick” since it was molded in red plastic. The casing was designed to be strong enough to endure prolonged use in schools, and 100 units were produced for testing in the education sector. 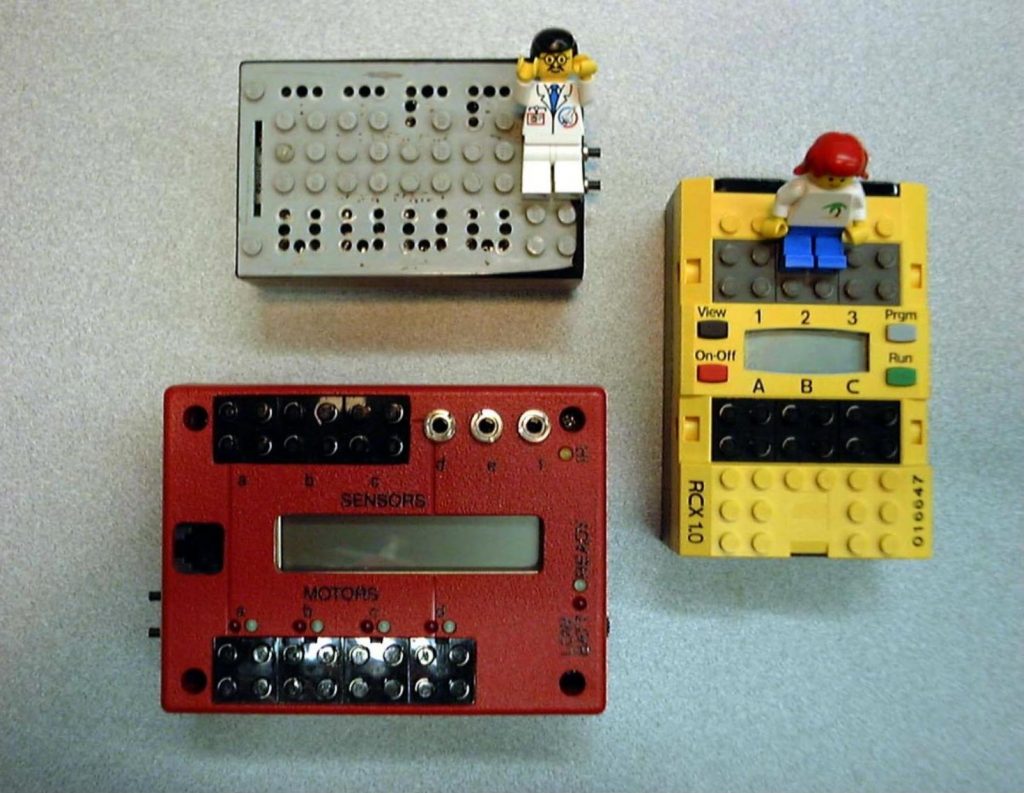 Observations from the testing period proved valuable in driving forward the development of the RCX brick. The team decided it was necessary to decrease the weight of the brick, as it’s 13 oz (368.5 g) weight was considered too heavy for incorporating it in models. Their red brick had six sensor outputs and four motor input ports. To lighten the load, the yellow brick limited the number of ports to three input and three output. A decision was made to retain the LCD screen because it allowed children to learn how sensors worked in real-time — No need to run the model back to the computer to figure out what was wrong.

In November of 1997, LEGO carried out a soft launch of Mindstorms in the form of opening a LEGO Mindstorms Center in Chicago, IL. While sets weren’t yet on the market, the LEGO Mindstorms Center allowed the public to familiarize themselves with the product. Children could program LEGO robots to participate in two activities, such as a Mars rover simulation with Exploration Mars and friendly competition with RoboSports. LEGO Mindstorms Centers would eventually make their way into LEGOLAND theme parks, alongside popular attractions like Miniland and the LEGOLAND Driving School.

To tide people over until the Mindstorms launch, LEGO released the Barcode Multi-Set in 1997. The base model was a complex-looking dump truck, powered by the included programmable “Code Pilot” brick. Unique for its time, functions were operable thanks to a barcode reading feature and touch sensor; the unit was even capable of playing sound. Like the Technic Control Center sets that preceded it, everything was operable without a PC. 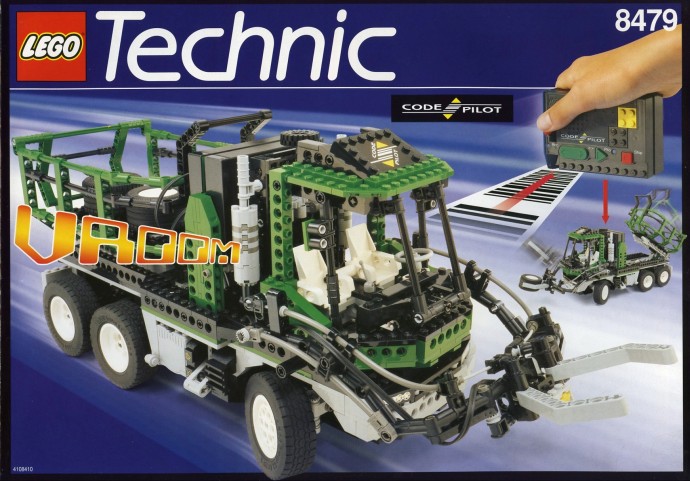 The launch of LEGO Mindstorms….and Cybermaster?

The official global unveiling of Mindstorms was held at the Royal College of Art in London on January 27, 1998. The other product featured was Technic CyberMaster set 8482, which was advertised as a more “action-packed” robotics kit. Set 8482’s primary models emphasized combat, with “the Crusher” being the motorized model. Control via computer was made possible via a radio-controlled programmable brick. If Mindstorms was LEGO’s educational flagship, CyberMaster was the equivalent of their version of Saturday morning cartoons. While children attending the event likely enjoyed trying out Cybermaster, the theme would be limited to 8482 and 8482/8483 (same as 8482, but with the addition of a storage case). Set 8450 The Mission released in 2000 ad possessed many hallmarks of the theme but without the Cybermaster branding. This was probably due to the fact that, while it included interactive software, it did not come with the programmable brick.

Introduction of Technic Cybermaster from the set’s included software

Even with a second product on-hand, the star of the show was Mindstorms. The unveiling was well-attended by members of the global press, and children aged 11 and older were bused in to try out the product; this also made for some good photo-ops! Kjeld Kirk Kristiansen was also on-hand for interviews and, by all accounts, he was filled with pride regarding an achievement over a decade in the making. He addressed the crowd with an inspiring speech:

For many years we in the LEGO Group have had a dream: that we could combine the creative qualities of the LEGO bricks and the basic LEGO values with the strength and potential of the computer. Today — after more than 10 years of creative research and development work — we can present a new generation of intelligent construction toys and learning tools to children…. New we are able to combine the LEGO Universe with the computer — and put a computer into a LEGO brick. 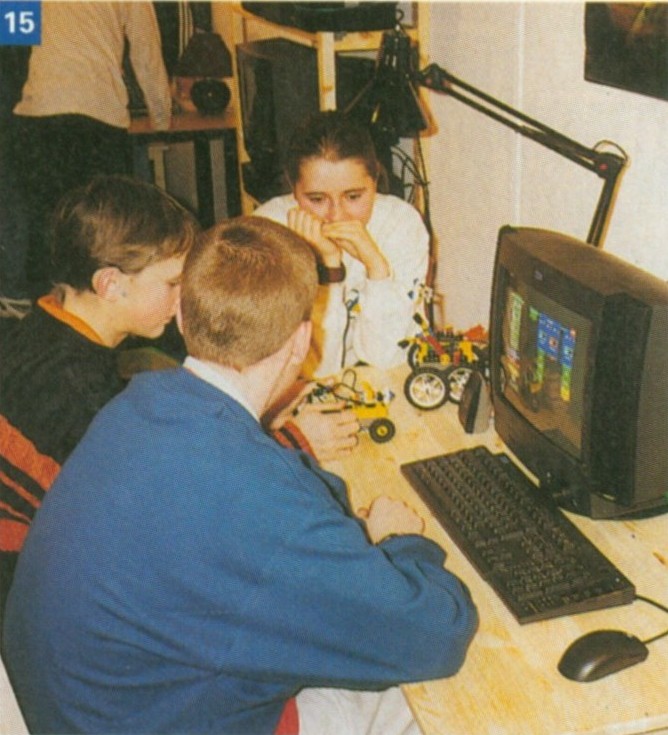 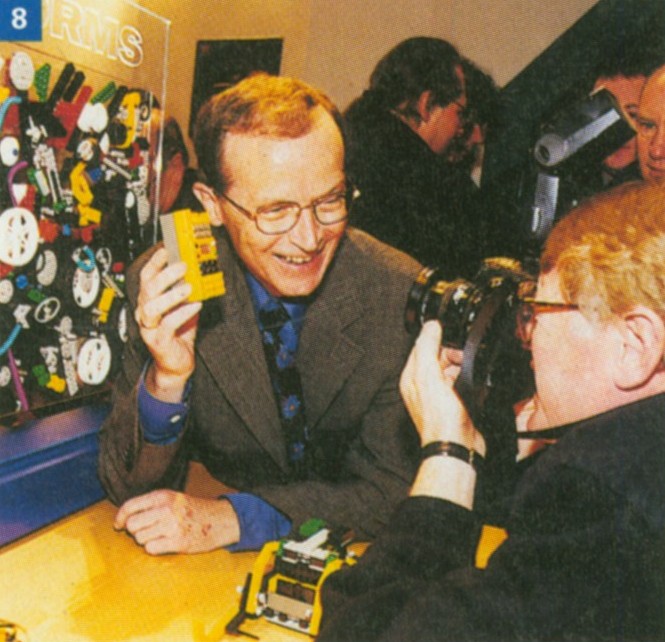 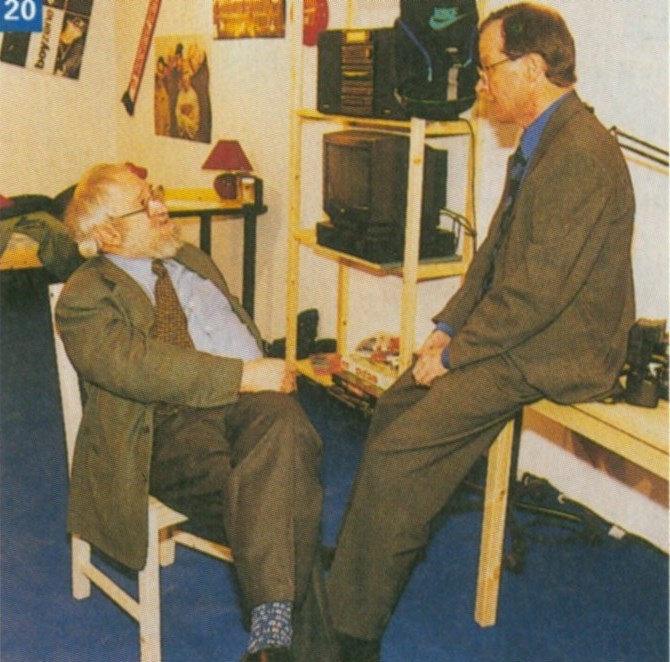 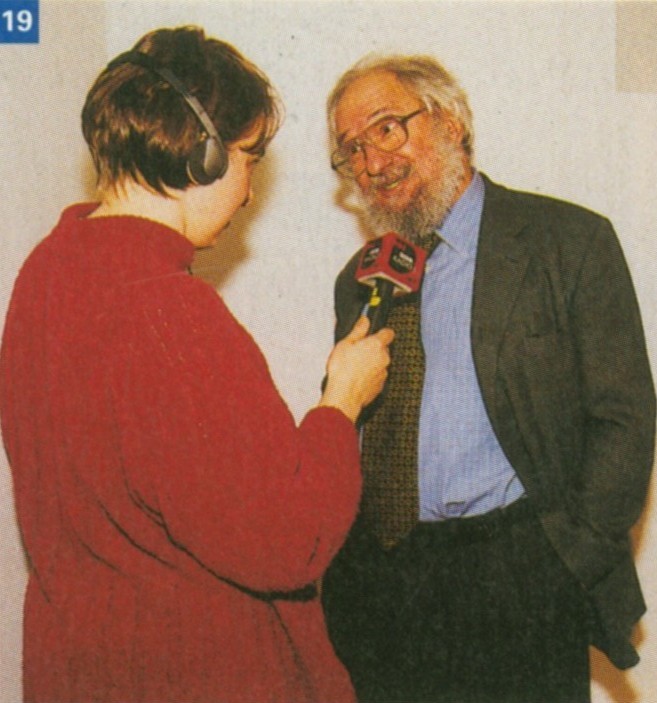 The U.S. unveiling followed on February 3rd at the Children’s Museum of Manhattan. While Mindstorms was the main attraction, LEGO also harnessed the star power of NFL star Joe Montana, who demonstrated an American football quarterback robot. The event kicked off enough buzz to hype it up for that year’s New York Toy Fair. 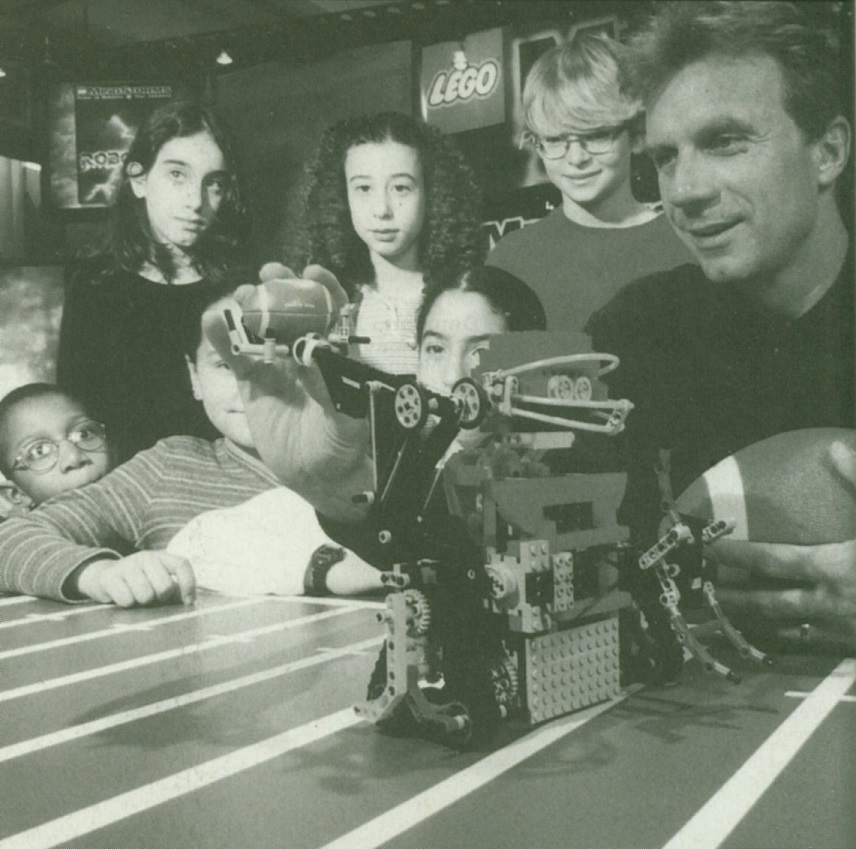 Promotion of LEGO Mindstorms continued in the months leading up to the September release date, including a demonstration in Denmark to Japan’s Emperor Akihito and Empress Michiko. 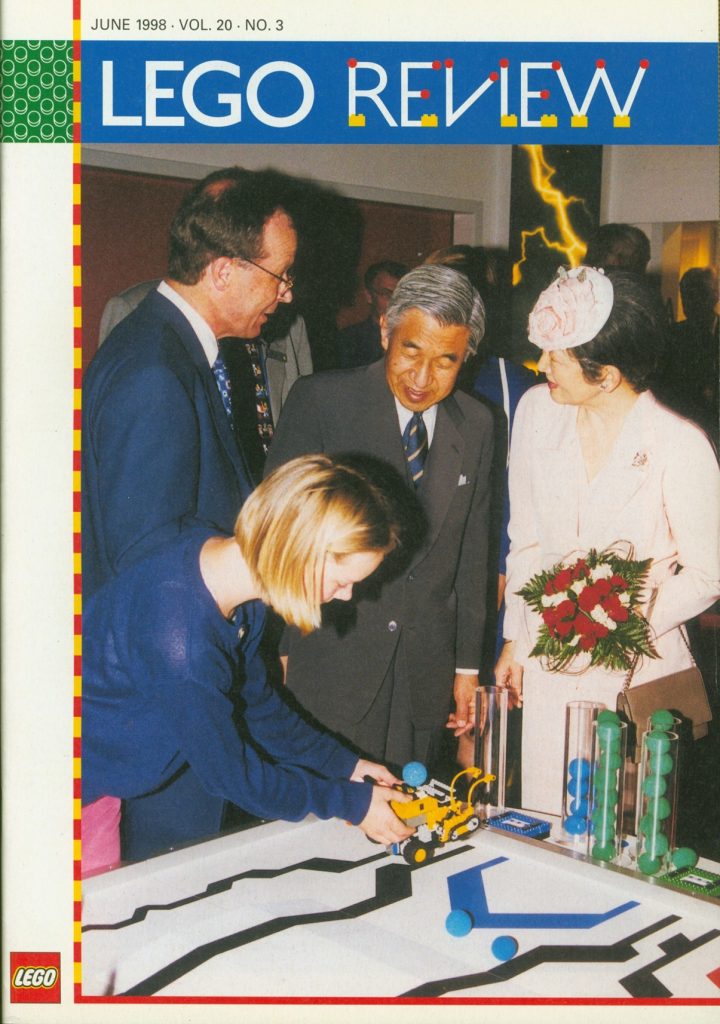 Demonstrations of Mindstorms were even extended to visiting dignitaries

The birth of FIRST LEGO League

While hype for Mindstorms was real, the project with the longest reaching impact was LEGO’s participation in 1998’s 7th annual FIRST (For Inspiration and Recognition of Science & Technology) competition at Disney World’s EPCOT Center in Orlando, Florida. FIRST was incorporated in 1989 by entrepreneur/inventor Dean Kamen as a means of exposing children to the joys of science and technology, and robotics competitions would became a cornerstone of the program. The 1998 FIRST competition was huge, with nearly 10,000 people converging on the “house of mouse” for the event.

To promote LEGO Mindstorms, LEGO sent their own team called the LEGO Maniacs. The team consisted of thirty-three students from eight schools, teachers, and a group of employees from LEGO System Inc.’s Production Department. Judging by the images below, the robot appeared to be made out of non-LEGO components but bore the LEGO logo and the team’s name. Nevertheless, the robot still had to be built from the ground-up over the course of six weeks. On the first day, the Maniacs placed 20th out of 160 teams. Unfortunately, on day two they failed to meet the three-win-in-a-row requirement needed to move forward.

LEGO was represented at the FIRST robotics competition in 1998

That same year, FIRST LEGO League (FLL) was formed by LEGO owner Kjeld Kirk Kristiansen and FIRST founder and entrepreneur/inventor Dean Kamen. Through FLL, children would build their own LEGO robots to tackle challenges in a competitive forum. Initially, FLL began with pilot programs in the U.S. and Denmark, proving successful enough to go international. Since then, FLL has expanded into 98 countries with 320,000 participants. 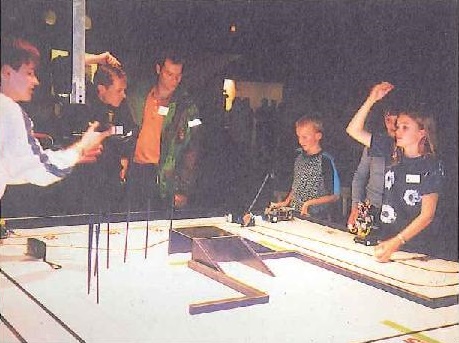 The release of Mindstorms products for schools

In 1999, LEGO Dacta adopted Mindstorms as an education tool with ROBOLAB and e.LAB. ROBOLAB came with its own software and allowed children to program their own robots. With e.LAB, the focus was on educating students about energy, and it even introduced a condenser and solar panel to LEGO’s portfolio of elements.

LEGO developed Mindstorms products for the education market in 1999

From Papert to Resnick – the passing of the torch

The success of Mindstorms was a win for both LEGO and MIT, with LEGO appointing MIT’s Mitchel Resnick as the LEGO Papert Professor of Learning Research at the MIT Media Lab – a title which he still holds to this day. The title was named after Seymour Papert, MIT’s original LEGO Professor of Learning Research. To celebrate Resnick’s status as the new LEGO Professor, Kjeld Kirk Kristiansen presented him with a framed gold-plated RCX brick. 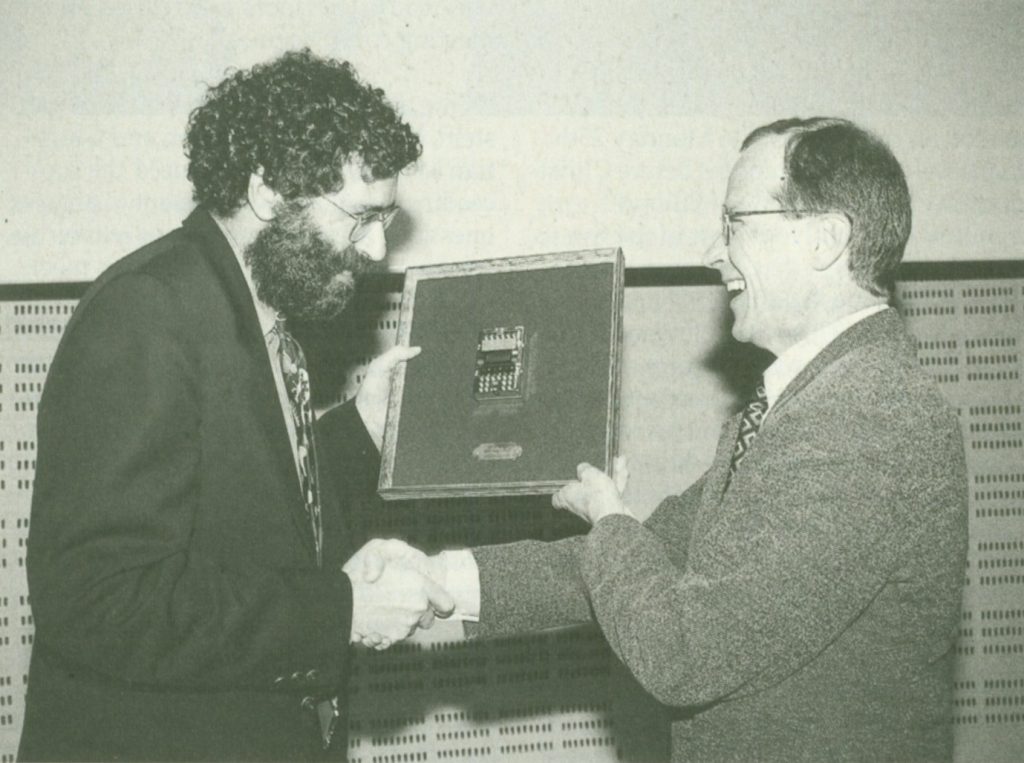 The path is never-ending

After receiving his award, Resnick gave an inspiring acceptance speech in which he declared, “we should think of computation as a new design medium…. [and] we want to make tinkering with computers just as easy and natural as tinkering with LEGO bricks.” Since then, Resnick’s vision has come to fruition in various iterations of LEGO computer programming products. LEGO launched Mindstorms NXT in 2006, NXT 2.0 in 2009, and Mindstorms EV3 in 2013. To reach even younger children, LEGO released a simple coding platform called WeDo in 2009 — WeDo 2.0 followed in 2016. 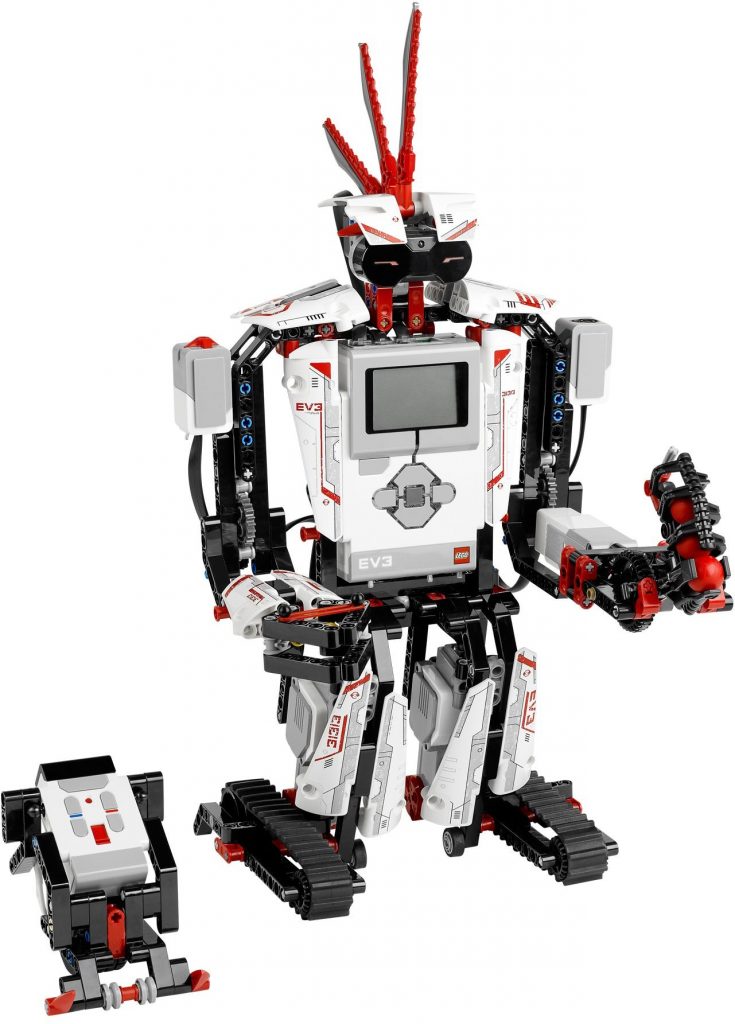 Now, in 2020, that path has culminated with the launch of LEGO Education’s Spike Prime programming kit. It’s drag-and-drop interface is definitely in line with Resnick’s goal to make programming easy and enjoyable for the engineers of tomorrow. As for what the next development in LEGO programming will be, it is perhaps best summed up by another 1999 quote from Resnick; “we need to create a new generation of technology that is worthy of a new generation of children.” In an ever-changing world driven by advancements in technology, there will always be a need for development behind new educational tools to set children up for success into adulthood. And with that, LEGO Education will be there each step of the way. 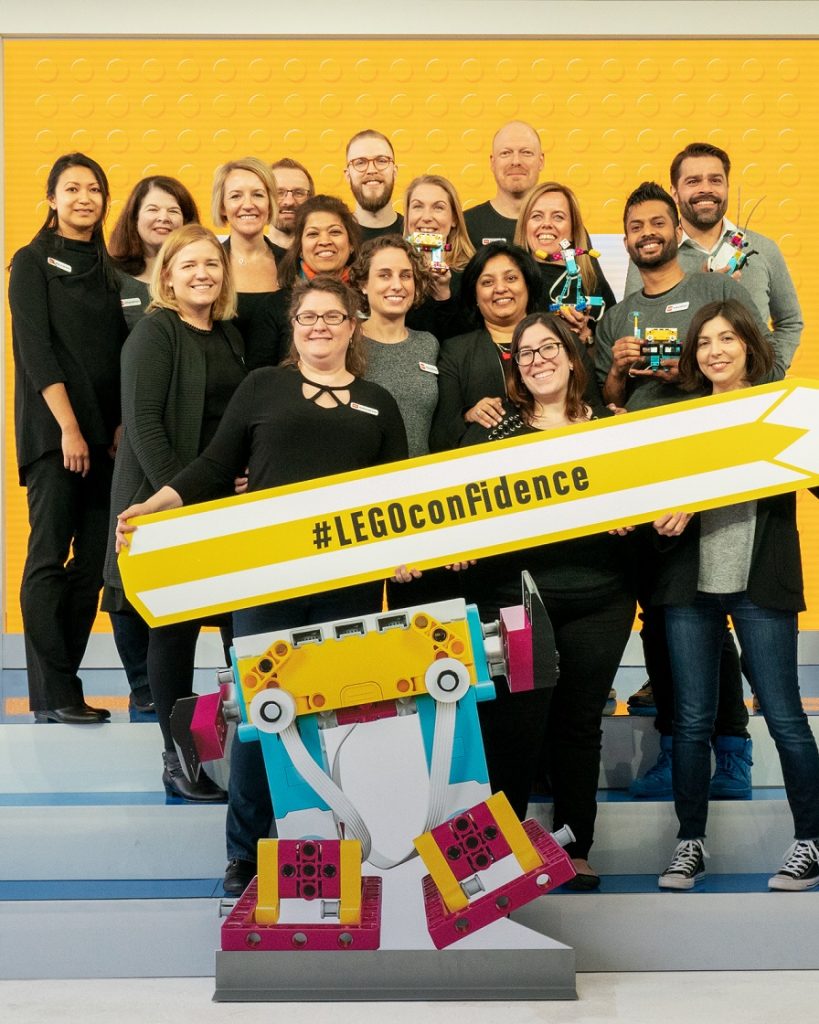 Read our previous installments in the LEGO Education history series

3 comments on “A History of LEGO Education, Part 3: Mindstorms over matter [Feature]”