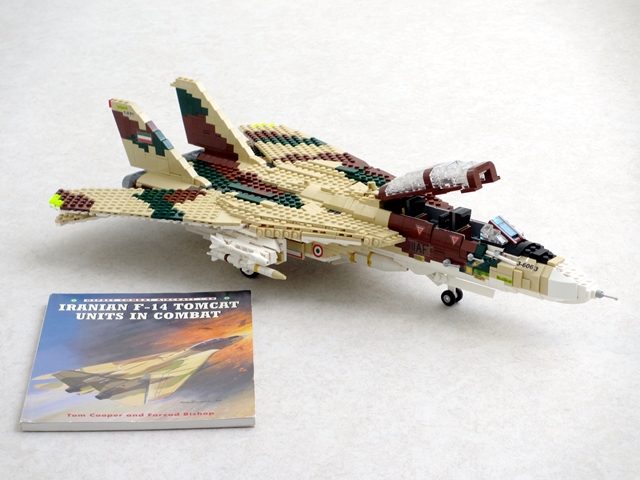 After the 1979 revolution, relations between the US and Iran soured. Subsequently, the US suspended weapons and spare parts deliveries. The serviceability of the Iranian Tomcat fleet dwindled, but their Tomcats had some successes in the 1980-1988 Iran-Iraq war. Details are murky, but according to Iranian F-14 Tomcat Units in Combat by Tom Cooper and Farzad Bishop, the Iranian planes shot down dozens of Iraqi fighter aircraft. Forty years later, thanks to illicit parts acquisitions and reverse-engineering, some survivors are still flying, and I finally built one.

I have been a long-time fan of the Tomcat and have had at least one LEGO model of a Tomcat for about 20 years. In the ‘seventies, the US Navy’s jets were light grey, with white under-surfaces. They also often had very bright squadron markings. As an example, one of my other current LEGO Tomcat models has the markings of Fighter Squadron 41, “Black Aces”. These colours look amazing, but I have long wanted to build an Iranian Tomcat as well. Unlike their US Navy cousins, they were painted in camouflage. That meant I had an issue with Tomcat parts of my own. I found LEGO dark green, reddish brown and tan, with white under-surfaces, to be the best mix. Unfortunately, though, the parts that I needed for this simply didn’t exist in the required colours. That is, until this year. 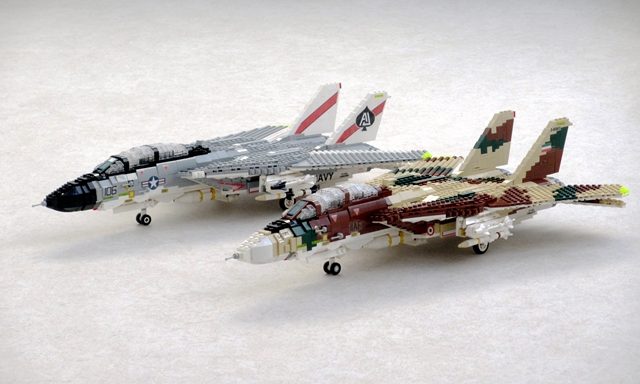 Because I already had a Tomcat design I liked, building the Iranian version became a matter of recreating the existing model in different colours. Obviously, building camouflage involves lots of small parts. This meant I had to be careful not to weaken the structure too much. After a few months of gathering parts and two pretty hectic days of building, I finally have a Persian Tomcat.