For almost ten years I have had a model of an F-4 Phantom in my LEGO aircraft collection. I have kept making changes to it, as I learned new tricks and picked up new parts. However, certainly compared to newer and larger models by Carl Greatrix and James Cherry, my old US Marine Corps F-4N looked a bit dull. Mind you, I am not about to start building studless or creating more of the colour scheme with stickers any time soon, but I did feel like jazzing it up some. My choice: turn it into an Israeli F-4E Kurnass 2000. 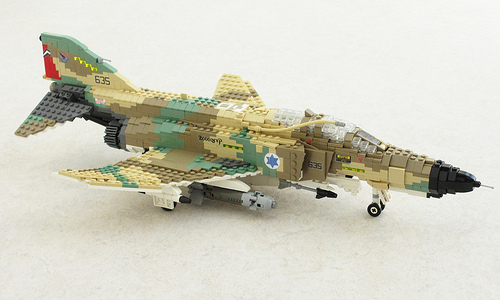 What makes this interesting in my book is the brick-built camouflage and most of the work in the rebuild was spent on this. The LEGO colours that best match the original colours weren’t particularly easy to work with: tan, dark tan and sand green, but the overall look was worth the trouble.

His model represents a USAF example used during the war in Vietnam and he has chosen dark green, regular green and tan to represent its SEA camouflage. It was designed such that all the parts used do exist in these particular colours. The render is not photo-realistic, but the plan view probably shows the brick-built camouflage pattern better than a real picture would. 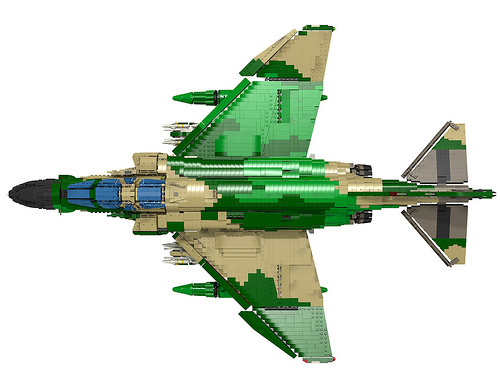 The purpose of camouflage is to obscure an object’s contours such that it blends into the background. This can be achieved by painting it in a single colour matching the background, which is why most air superiority fighters are painted a blueish grey. It’s also often done by adding a pattern with patches of different colours. If you think that randomly choosing LEGO parts in a few different colours will suffice to build decent-looking camouflage, think again. The pattern is not random. The size of the patches is typically matched to the background as well and getting it right is important, but it is easy enough on the Phantoms, as they are based on real-world examples. This leaves building the demarcations between the patches as the most difficult job, but this too gets a lot easier if one sticks to two rules:

If you look at my Phantom, you’ll see that I am fairly consistent in applying both. Justin may not be consciously doing the same (he has tried to closely mimic the pattern on the real jet), but most of the pattern on his model does follow these rules and the few bits where the camouflage doesn’t quite work are the ones where it doesn’t. I came up with these guidelines a long time ago and wrote about them in a post for my long defunct Lego Military Models blog, but they still work. Use them to your advantage.