It has been thirty years since Top Gun hit the big screen, and the true star of the movie, the charismatic Grumman F-14 Tomcat, was retired from US Navy service almost ten years ago. I built my first LEGO Tomcat more than 20 years ago and I have kept making improvements, as I learned new tricks and as new parts became available. Usually the changes were fairly small, with the core of the model changing very little. 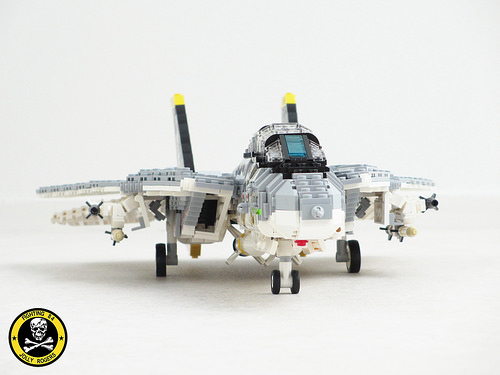 Ever since I completed my 1/22 scale model a few years ago, I’ve been eyeballing my three smaller 1/36 scale models, no longer liking what I saw. They looked very crude compared to the bigger model and they lacked a few essential features. The intakes on the Tomcat are cranked and the vertical tail fins are canted outward. These sort of things may not seem important, but they make a big difference to the look. Furthermore, the undercarriage never really worked properly, the nose was a bit long, the angles of the wings weren’t quite right and there were a host of other little things that could be improved. Of course, I had to avoid messing up the things I did like about the existing model, but small incremental changes weren’t going to hack it any more. 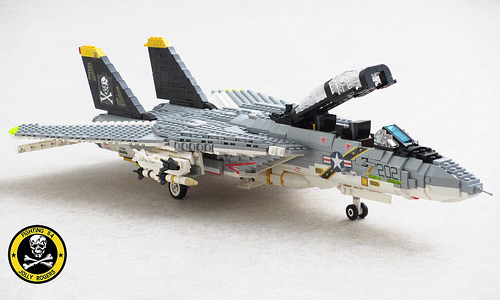 I started with a new model, albeit with the old one nearby for comparison purposes. The first jet I decided to rebuild has the famous skull and crossbones markings of Fighter Squadron 84 “Jolly Rogers”, like they had in the ‘seventies. I don’t care much for stealth fighters. My Tomcats are probably the closest thing I have to a signature build, which makes me proud to say that the cat is back!