Santa Claus, despite his media persona and the products he is implied to endorse, is not the consumerist type. Sure, he brings presents on Christmas to children, but not the max-out-the-credit-cards-and-refinance-the-house pile of presents that parents are somehow expected to provide. He lives a life of humble solitude, somewhere up in the frozen north (though not the North Pole; what responsible person would build a house on seasonally variant ice?), where he prepares for his annual journey of beneficence. At least, that is what this build by Andrea Lattanzio (Norton74) seems to imply. A delightful cabin, similar to Walden but much redder, rests in a peaceful snow-covered clearing, with deep snow on the roof and a sled ready to go (even though the sled is pulled by huskies, rather than reindeer). 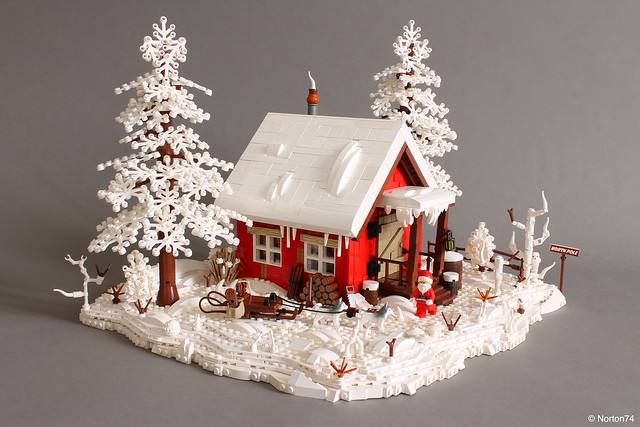 The most impressive part of the display might be the collection of parts used to create the snow-covered foliage, from levers and megaphones to minifig hands and everything else white. However, I love the cannon as a chimney — topped by pots, even more. Unicorn horns make for lovely icicles on the eaves (if only they were available in transparent colors!). My one quibble is that the woodpile looks far too sparse to make it through the winter in conditions like that. Santa will freeze to death. Unless he isn’t watching out for the polar bear lurking behind the cabin, in which case he’ll be devoured before freezing. And before bringing me LEGO for my stocking.