The LEGO Architecture sets have recently taken us to London, Paris, Shanghai, and New York, amongst other famous world cities, but the latest places to receive the LEGO skyline treatment are Tokyo and Dubai. 21052 Dubai depicts five famous landmarks of the United Arab Emirates’ most populous city, contains 740 pieces, and will be available in January 2020. It will retail for US $59.99 | EU €59.99 | UK £54.99. 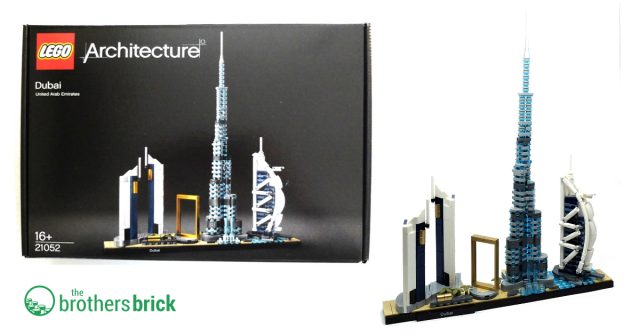 The box is the usual classy black card of the Architecture series, featuring images of the set on both front and rear. The back of the box has real-life photos of the five Dubai landmarks included, allowing you to compare the microscale LEGO versions with their inspiration. The set depicts the Dubai Fountain, the Jumeirah Emirates Towers, the Dubai Frame, the Burj Al Arab hotel, and Burj Khalifa — the tallest building in the world. The box rear also details the dimensions of the completed set — 27cm wide, and a whopping 32.5cm tall.

The box contains 5 numbered bags and the instruction booklet. Two of the bags are smaller, both containing lots of Transparent-Blue 1×1 round studs. No less than 149 of these pieces go into Burj Khalifa’s glazing, making up a full 20% of the set’s part count. 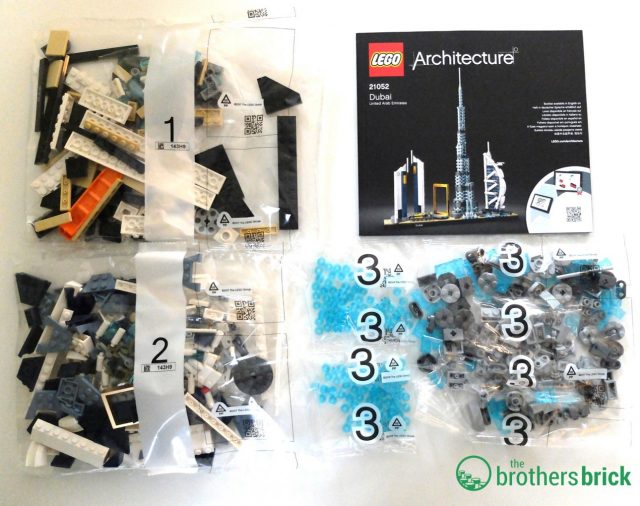 The 112-page manual takes you through the 169 construction steps required to complete the model, and as is traditional in Architecture sets, features double-page photo spreads providing information on the landmarks depicted. The instructions are peppered with further trivia and images as you move through the build. 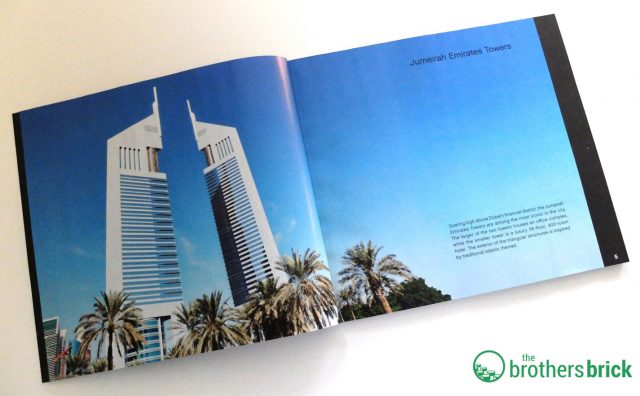 Bag 1 will see you constructing the diorama’s base — a long, thin strip of plates, studded with attachment points for the buildings to come. There are sideways-facing studs to attach the smooth tiles, and a “Dubai” printed tile to label the display.

Some people say building baseplates is the least interesting part of putting together a LEGO set. I disagree. I love the sense of anticipation created by lone studs, and connector pins or turntable bases placed just-so. I enjoy trying to work out how the rest of the model might use these attachment points. This set doesn’t disappoint, with some interesting connections and some smart techniques for angled construction that take the landmarks off the typical 90-degree LEGO grid.

After putting together the base, we get torn into Bag 2 and start building some actual buildings! The Jumeirah Emirates Towers are first, and almost straight away there are some interesting techniques — loose parts held in place by the bricks around them rather than being attached. 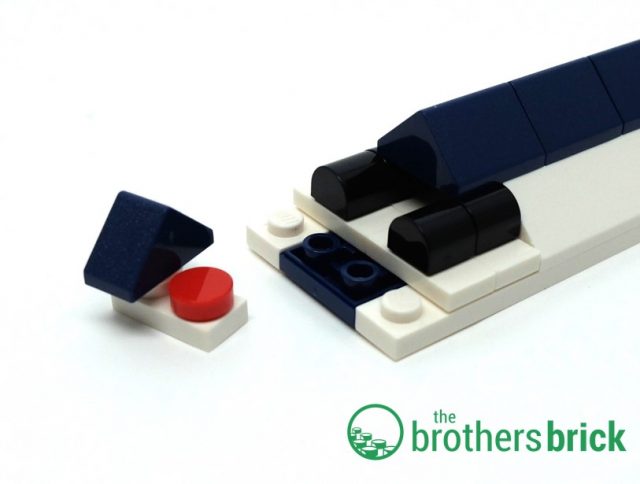 The Towers are smartly-designed, and look good from both front and rear. I particularly liked the way the bottoms of the towers were built to lock them in place at an interesting angle on the base plate. With the addition of some tiny palm trees, and the simple construction of the neighbouring Dubai Frame, this section of Dubai looks lovely… 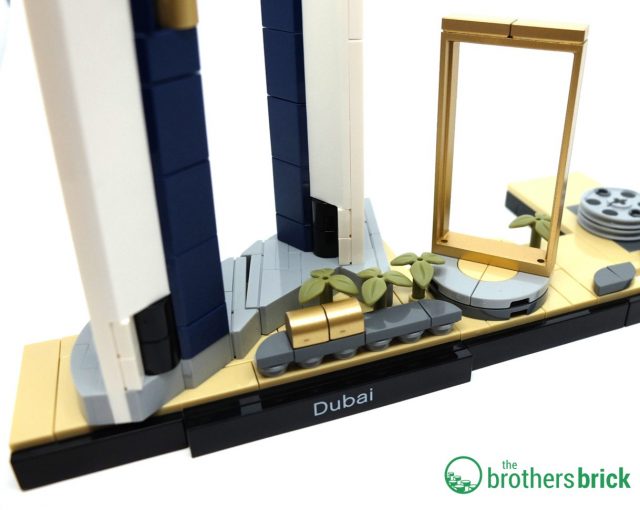 Next up we start on the Burj Al Arab, one of the most iconic buildings in the world. When I heard about this set, I was intrigued as to how its distinctive shape and curving metalwork would be captured in LEGO bricks. The design is spot-on, immediately recognisable despite the small scale, and great fun to build from sandwiched layers of dark- and sand-blue wedge plates, with 1×1 “Barista” bars providing angled attachment points for the girders. 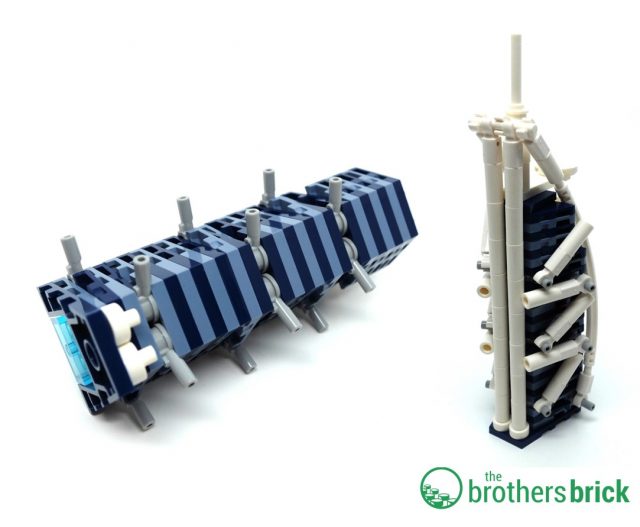 With the luxury hotel and the Dubai Fountain in place, the Dubai skyline is really starting to take shape. However, it’s still missing its most famous landmark, the Burj Khalifa. Since it topped-out in 2009, the tower has been both the world’s tallest structure and it’s tallest building. 828m tall and 163 floors, it’s surely an impressive structure, but it’s greatest achievement must still be managing to make Tom Cruise look even shorter than he is in real life in 2011’s Mission Impossible: Ghost Protocol. 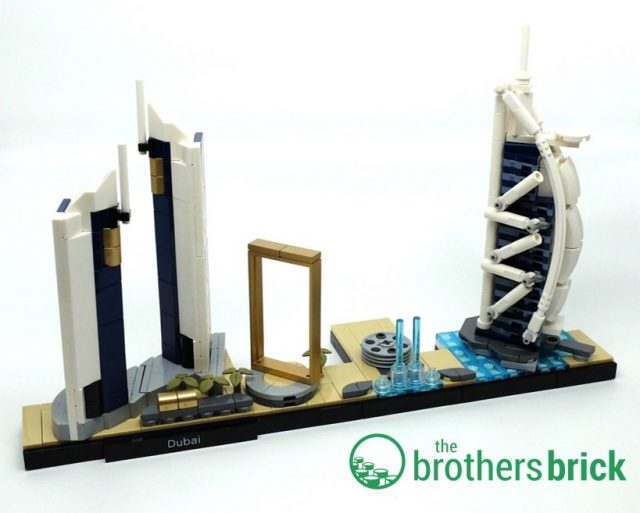 And so, we’re on to Bag 3 — the final stretch, the big one, Burj Khalifa itself. This is the LEGO architecture line’s third version of the world’s tallest tower, having previously released two sets of the skyscraper by itself: set 21008 Burj Khalifa in 2011, and the larger 21031 Burj Khalifa in 2016. I’d love to say this latest version was the best part of the skyline construction process, but honestly, it’s a bit of a slog. The stacking of round 2×2 plates, with Transparent-Blue parts sandwiched between is pretty repetitive, and lacks the sparks of interest prompted by the different techniques employed in the Jumeirah Towers and Burj Al Arab. Further, unless you’re paying real attention, it’s easy to start off each section of the tower with a dark grey plate rather than the correct light grey one. This happened to me twice, prompting some rebuilding accompanied by bad language.

Having said that, as you click the tower segments together using three-way Technic pins, the construction starts to look pretty cool, like some sort of vast spaceship. And the middle section of the tower is a more interesting angled construction using hinge parts. Putting the assembly thus far in place on the baseplate feels satisfying, and you start to feel a sense of achievement with the end in sight… 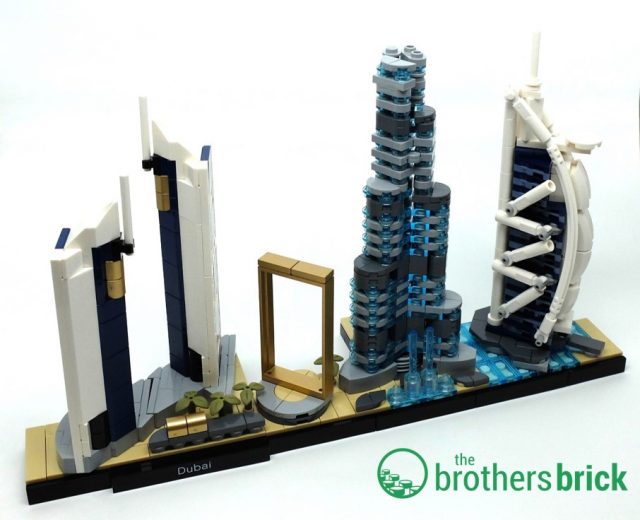 Not so fast! Your topping-out ceremony is still a while away yet! We’re back to the repetitive stacking of plates, layering Transparent-Blue parts between grey plates, for almost the same height again. It’s a curiously lacklustre ending to construction. Yes, it feels good when you click that final segment of the tower into place, yet that last stretch of building is probably the least fun part of the whole process. But, pacing gripes aside, there’s no denying how impressive the final model looks… 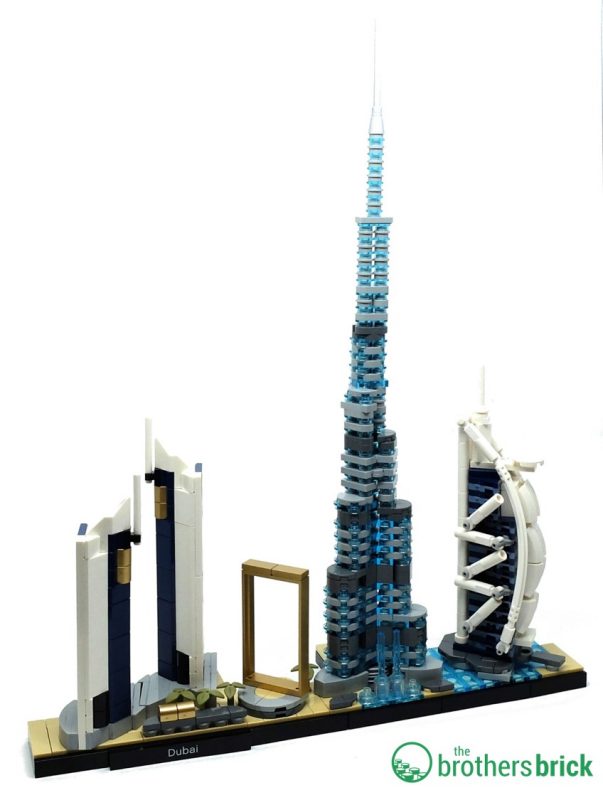 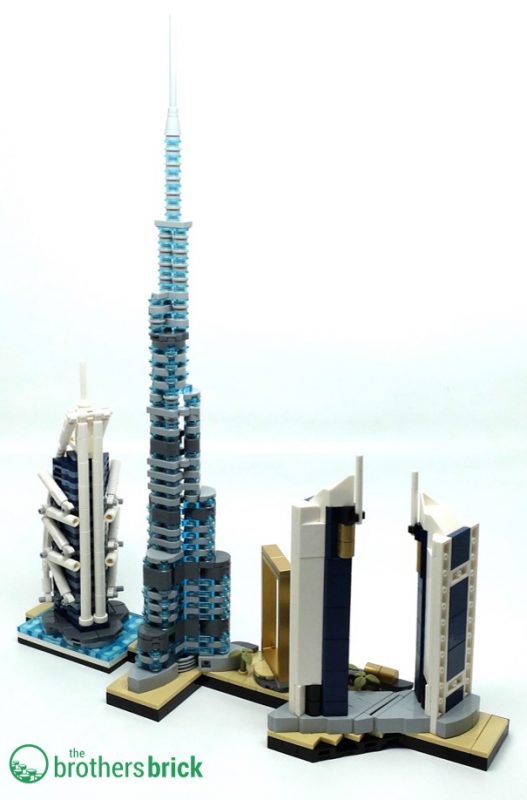 There are a few new or interesting LEGO pieces in 21052 Dubai, not least the Olive Green plants which will surely start to pop up alongside their bright green counterparts in many a microscale jungle build. I was also delighted to see the Sand Blue wedges — an unexpected treat which I’m already planning alternative uses for. 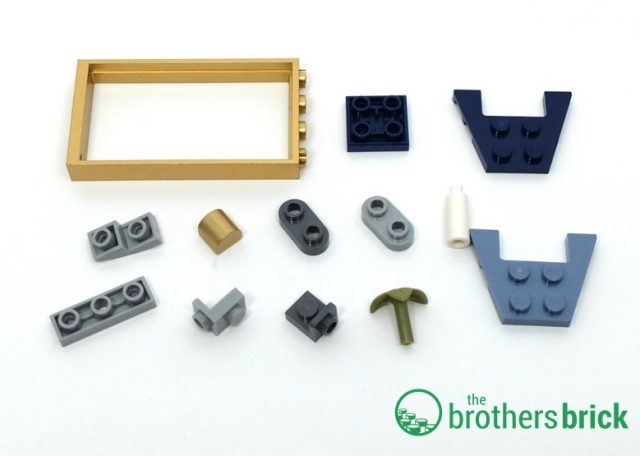 Should you take a trip to Dubai? Absolutely.

21052 Dubai is a cracker of a display piece — impressive in scale due to Burj Khalifa’s height, and impressive in the detail on show in Burj Al Arab. The Dubai Frame and Fountain are somewhat throwaway in their construction techniques, but the models nicely capture their real-world inspiration, and the twin Jemeirah Towers offer some interesting connections in a fun build.

My only niggle is the pacing and order of the construction. Whilst topping-out the tallest structure is probably the obvious climax for the build, I can’t help but think it would have been more fun to sandwich all that layered plate in the middle of construction and finish the build off with the cool techniques employed in Burj Al Arab.

Regardless of this minor complaint, I enjoyed putting 21052 Dubai together, and I’d recommend it to anyone who likes building clever LEGO models destined for display. 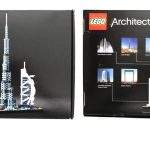 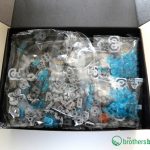 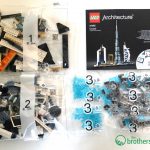 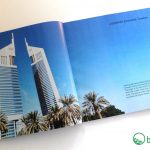 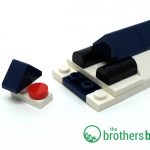 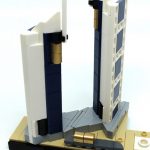 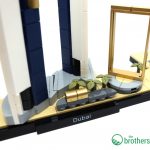 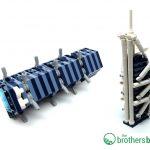 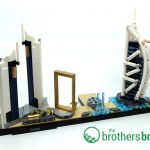 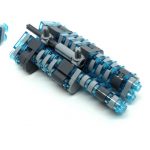 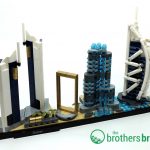 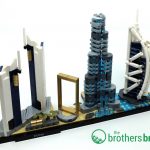 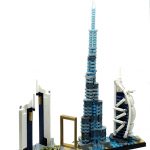 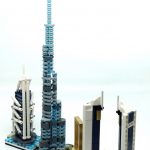 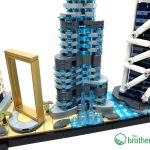 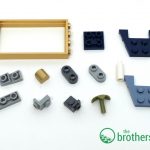 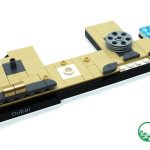