You know what isn’t supposed to mix? LEGO and booze. But sometimes it does. And wow, can it be a lot of fun to watch. Recently, I shared my tribute to the TRY channel’s drunken LEGO building. It featured one of the three pairs of TRYers who attempted to build sets while smashed out of their gourds. The people I depicted enjoyed my creation, but it didn’t end there. One of the other people in the video, Mary-Claire, asked if I could build her and Lolsy Byrne next. So…here we are.
MC and Lolsy’s attempt at building Yoda’s Hut (75208) didn’t quite go as smoothly, but I think it’s fair to say they had a great time anyway. Even if MC was momentarily confused if their set was from “Sky Wars” or some other franchise… (To be fair, she was really drunk!) 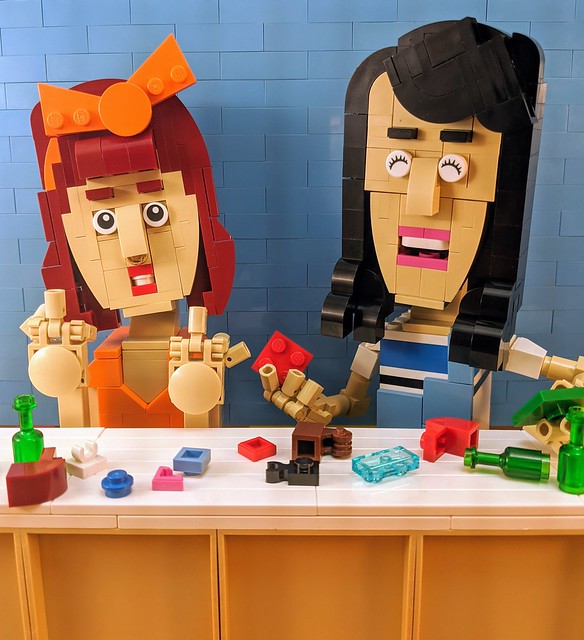 I ran into a couple of challenges in making recognizable likenesses. Lolsy’s nose ring (made from a minifigure gold ring) was difficult to position. Luckily the 2×1 curved slope of her nose has a notch that allowed for the ring to sit on the top of a 1×1 Technic brick built sideways off of her lip. That allowed enough of an offset to have at least almost half of the ring “exposed” below her nose, and flush with the rest of her face.
Mary-Clare’s mouth also gave me a bit of trouble. Eventually I found a combination of 1×2 and 2×2 plates for her lips and a 1×2 rounded plate for her teeth that worked. The mouth assembly is “studs down”, so the connection point on the underside of the 2×2 plate creates a nice suggestion of a tongue…an unexpected but welcome side effect. 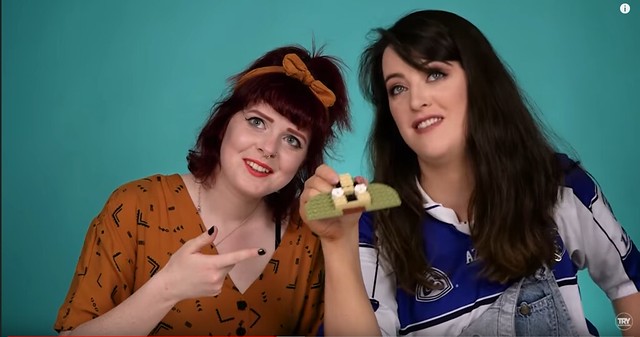 I also wanted to add a little something extra to this second build, so I decided to animate a bit of the video. (From about the 6:00 mark). At that point, Lolsy has a few choice things to say to anyone who has a problem with their Star Wars knowledge…click on through to see her LEGO avatar in action!