LEGO Castle displays tend to focus on the Western European medieval era, with great grey fortifications set amid green forests, featuring knights engaged in combat, with perhaps the odd siege engine chucking rocks. How refreshing to see this huge collaborative display by thirteen members of SwissLug which breaks with tradition on two fronts: first, by depicting a city in the Levant (the lands of the Eastern Mediterranean), and second, by showing off the peaceful, multicultural side of life (probably right before the Crusaders show up and make a nuisance of themselves!) 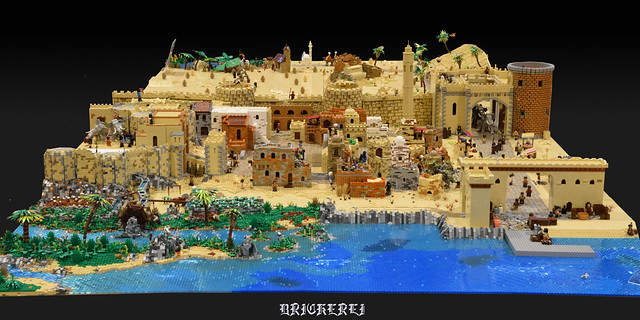 The city is sandwiched between the water and the dunes, protected from any desert raiders by a high wall and a castle. The brickwork on the wall and the round towers is particularly good, as is the variety of architecture on display. The builders have pulled off the neat trick of injecting texture and detail to break up the mass of tan and dark tan, whilst still preserving an overall colour scheme and unifying look — this sort of thing is a key success factor in the best collaborative displays. The model isn’t just big, there’s an impressive attention to smaller details going on too — elephants and camels plod through the bustling market streets, rooftop canopies provide welcome patches of shade for the residents, and a waterwheel feeds the thirsty townspeople via an aqueduct. 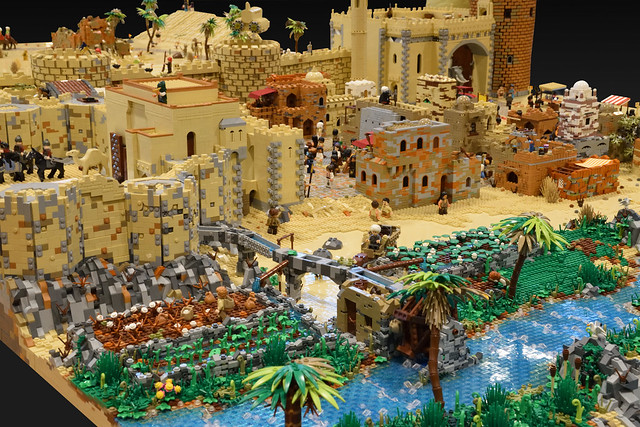 And just in case you think that desert scenery in the background has been created with forced perspective building techniques, here’s a view of the overall model which makes its full scale apparent. The diorama stretches no less than 4 meters (that’s 16 LEGO baseplates!) from the riverfront to the distant desert oasis…

Photos via Dornbi, the builder responsible for the wall section of the build.

(It struck me that with only minor redressing of the set, this could make for an AMAZING Indiana Jones layout. Please make that happen SwissLug. Pretty please?)