If you want to get the god of the underworld to do you a favor, you had best rosin up your bow and get ready to fiddle for your soul. Oh wait, wrong story. Music is still the key, though, and I’d wager a fiddle made of gold that the Ancient Greek hero Orpheus could even beat Johnny from Georgia; at very least he played his lyre so beautifully that it moved the cold heart of Hades to compassion, granting him his desire to take the shade of his beloved wife Eurydice back to the surface (with some provisos, admittedly). Simon NH has built the scene of the hero before the god, and it captures the feeling of the underworld perfectly. 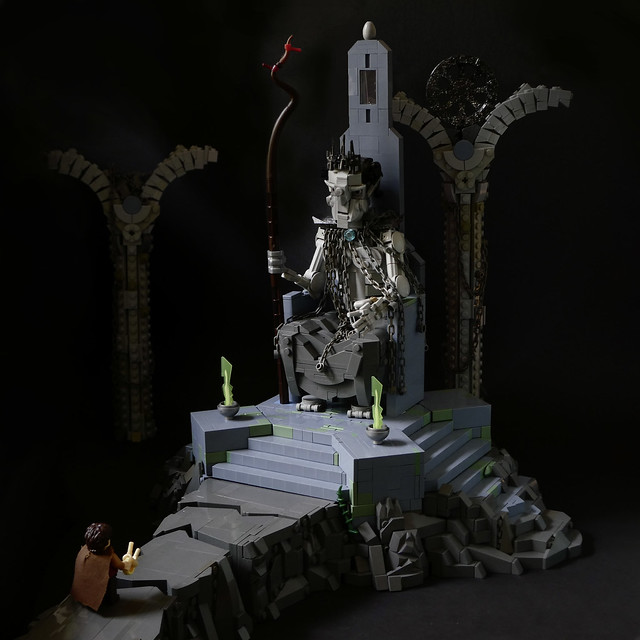 The god is fittingly large in relation to the mortal, and his face is cold and foreboding. His crown is made from sais is nice and spiky, and chains hanging everywhere give it all the feel of a dungeon. My favorite bits are the green flames made from jagged-edged swords, just for the splash of color it gives to an otherwise dreary-toned build. But what really sets this build apart is the dramatic lighting. Everything is in shadows except the figures and the bit of path separating them, setting the stage for the dramatic performance of Orpheus. Despite being, in my mind, the Hawkeye of the Greek heroes (Jason: “What’s your superpower?” Orpheus: “I play the lyre.”), Orpheus ends up being one of the most impressive of them all.