In the depths of LEGO space and time, the amount of creative ways to build space craft has blossomed exponentially. Sometimes from the most complex of concepts and other times, from something as simple as a basic letter from the alphabet. Dave Kaleta has been working on his letter based starfighter series since the beginning of this year. Though what really impressed me, aside from his great creations, was that his three-year-old son, Elliot, sat predominantly at the head of the build team. Inspired by a Star Wars letter-based starfighter contest a few years back, they set some of their own rules to build by and opened up a newly inspired space. 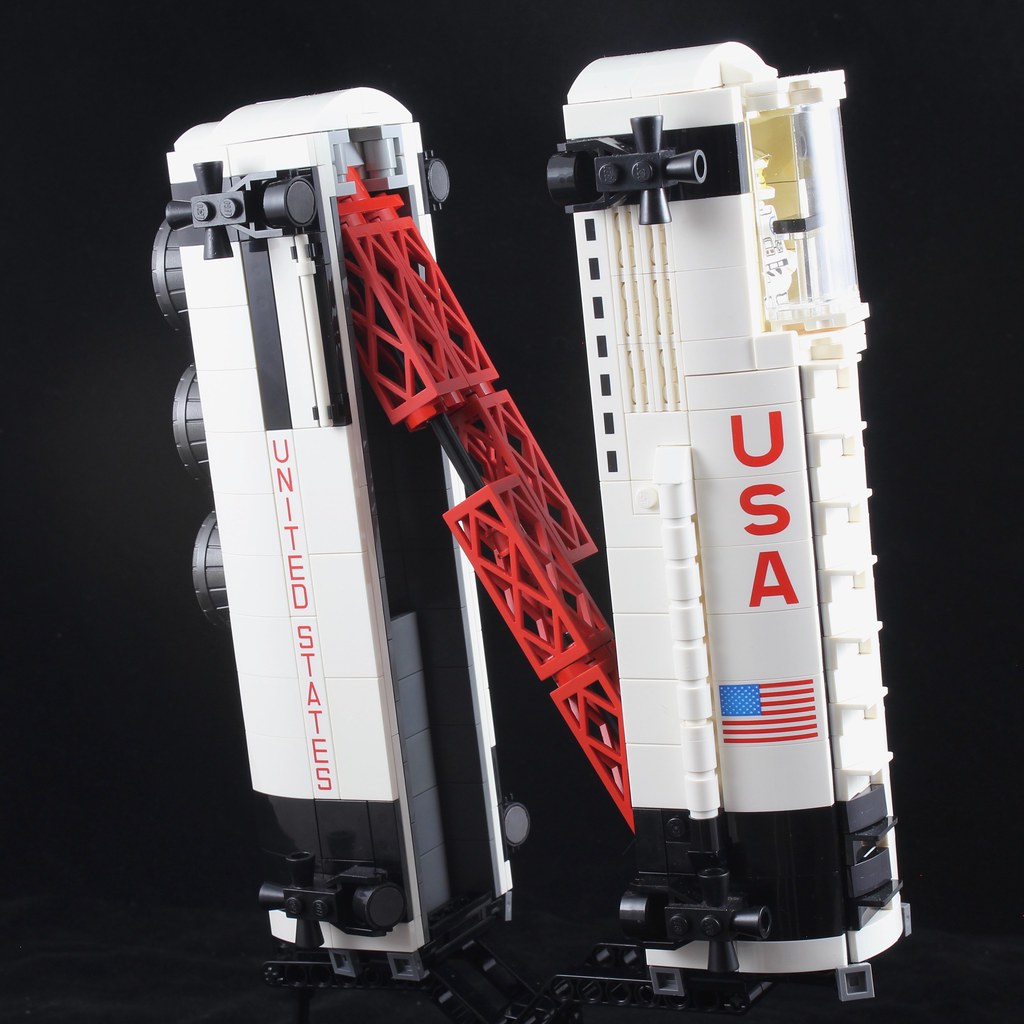 As previously mentioned, rules had been set to build off. Dave notes that his rules were as follows:

1. Obviously, the ship has to be in the shape of the letter
2. It must be strong enough for a three year old to play with it without breaking (this includes a cockpit that can open)
3. The primary color and cockpit location are chosen by Elliot
4. Any piece Elliot finds (that matches the color scheme) MUST be incorporated into the build
5. What Elliot says, goes. So if he wants a play feature or design element, I HAVE TO find a way to make it happen.

Having such creatively rigid guidelines has allowed for the formation of an amazing series of durable starfighters. The play features incorporated into each one are equally as impressive, like the folding mechanism found in the middle of their most recent build, N-Wing. When expanded, the letter is present yet when its folded away, its held snuggly together with the ingenious use of magnets and 2×3 magnet holders. 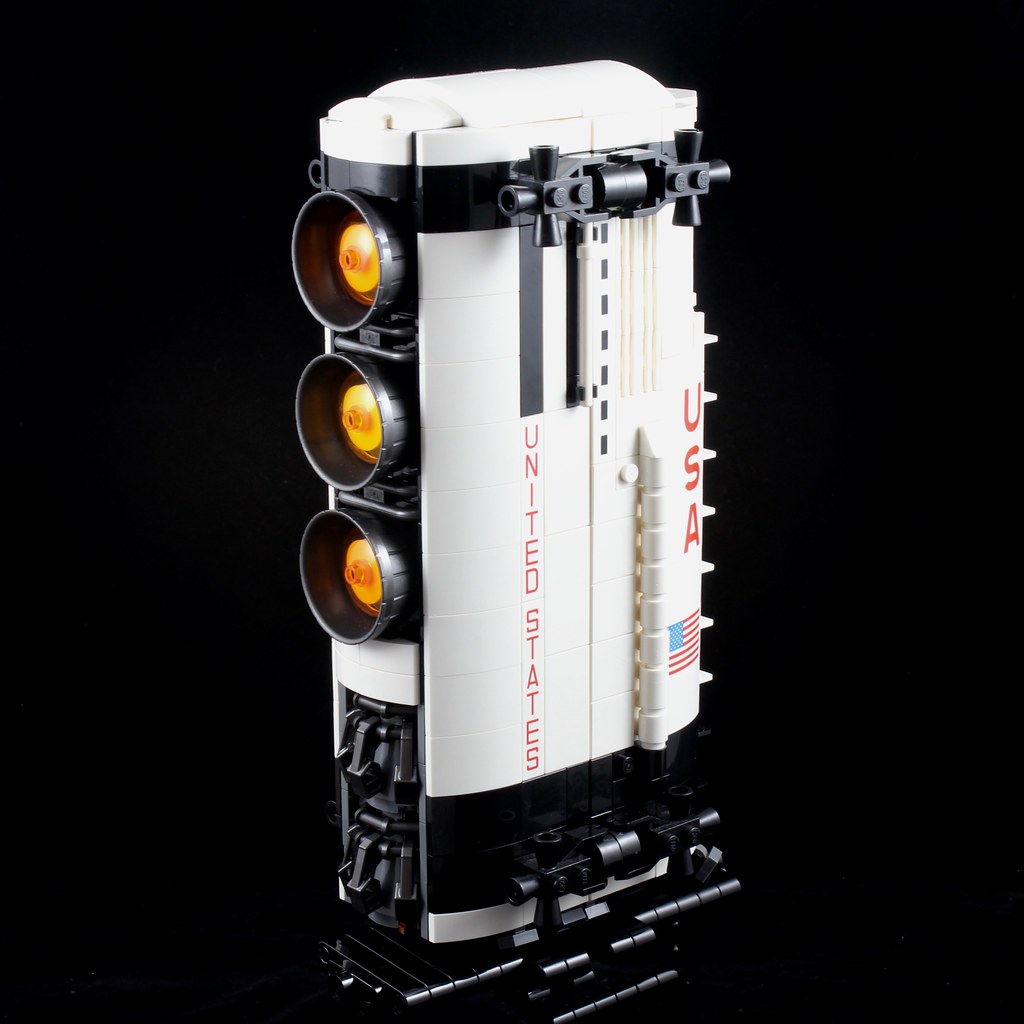 A previous starfighter was the S-Wing, a build constructed in stark contrast to the N-Wing in practically every way. Its only similarity lies in the topside cockpit position. Smoothly paneled in dark blue and greebled in light bluish grey, this character takes on a particular old school graffiti feel, pronounced further by the splashes of trans neon-orange. 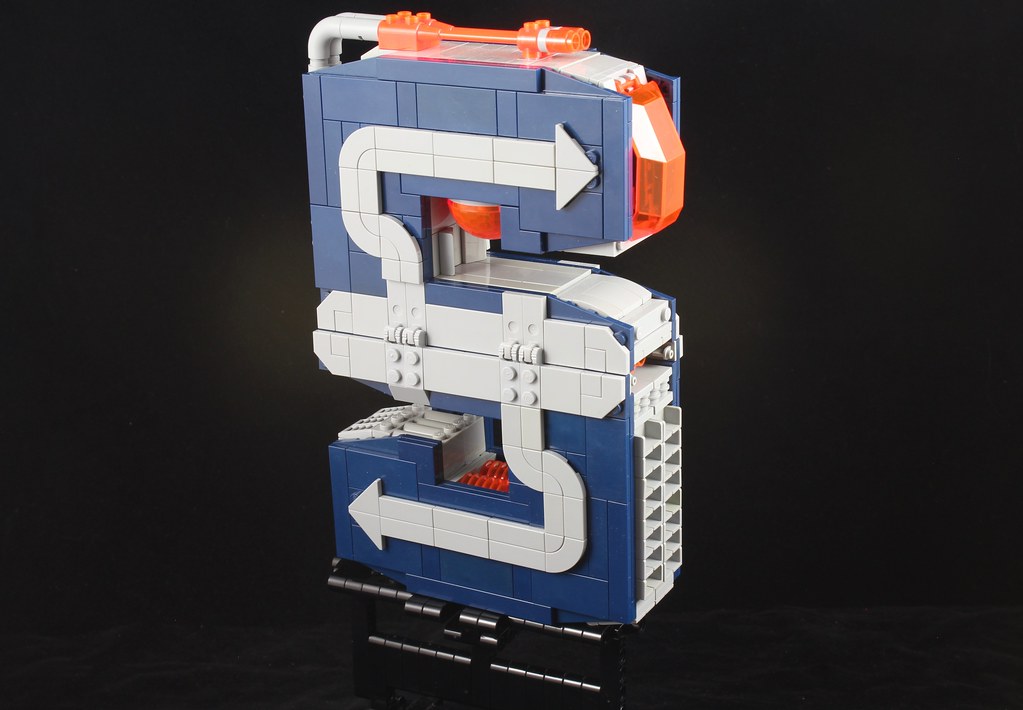 The S-Wing’s main play feature is in its adjustable wings, opening itself up to be a tri-wing craft. Not only does it look more aggressive in this position, it also exposes a perfectly graspable handle for three-year-old Elliot to go swooshing around the house with, in full control. 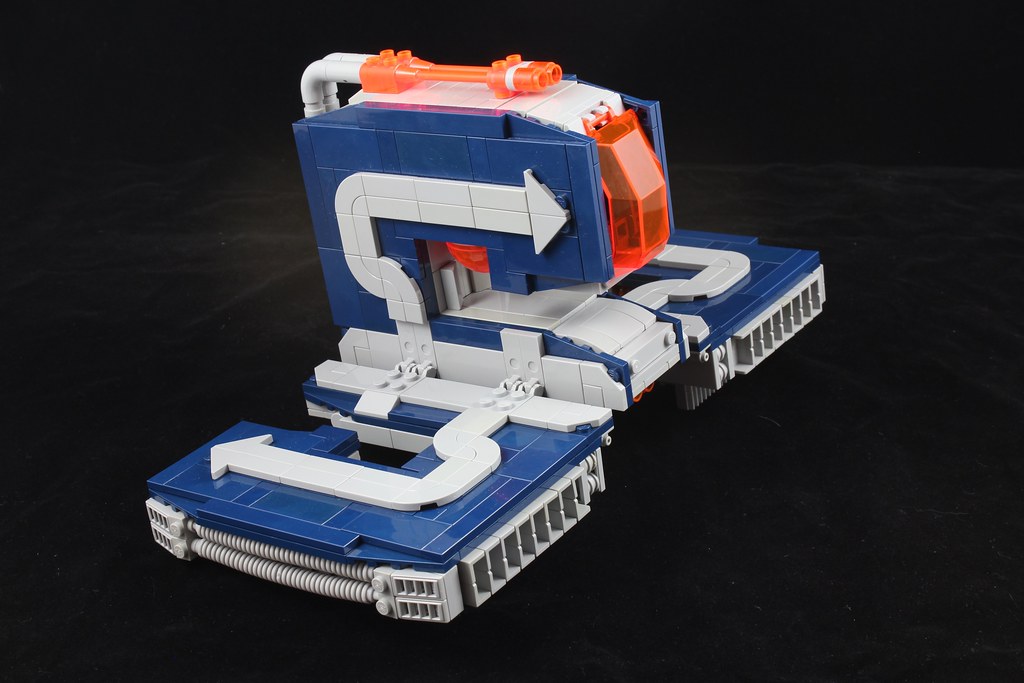 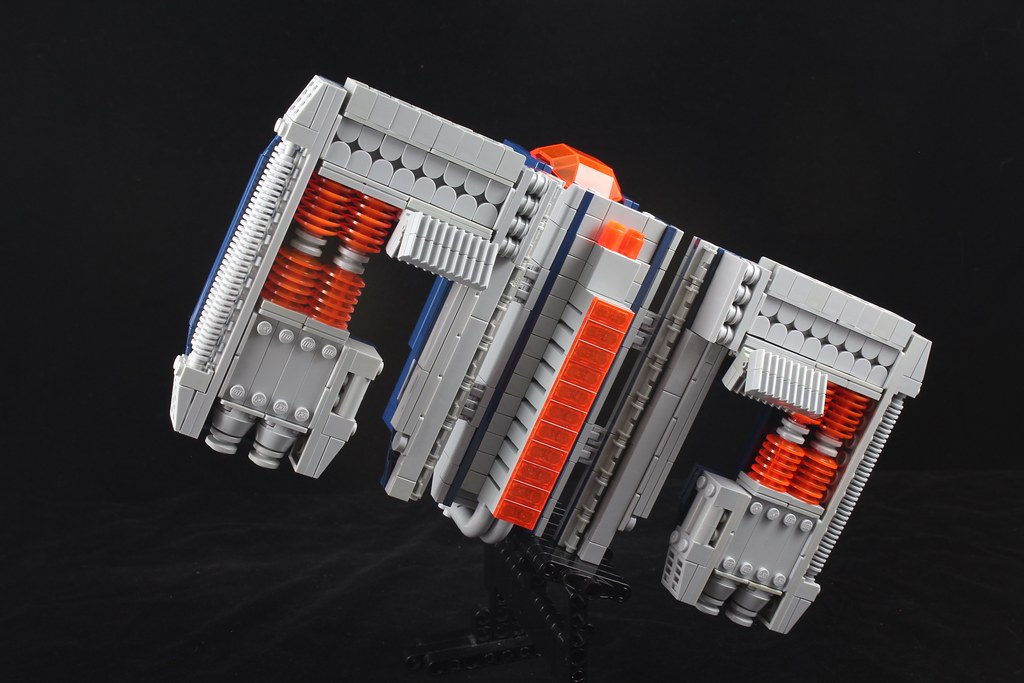 The range of colour schemes chosen over the series is impressive, with some taking a likeness from fondly remembered themes of old. This A-Wing is a fine example, sporting the ominous black and yellow stylings of Blacktron. I remember building the Blacktron Message Intercept Base when I was young and also the feeling of playing with it for hours afterwards. I can only imagine what Elliot must be feeling with this sturdy starfighter. 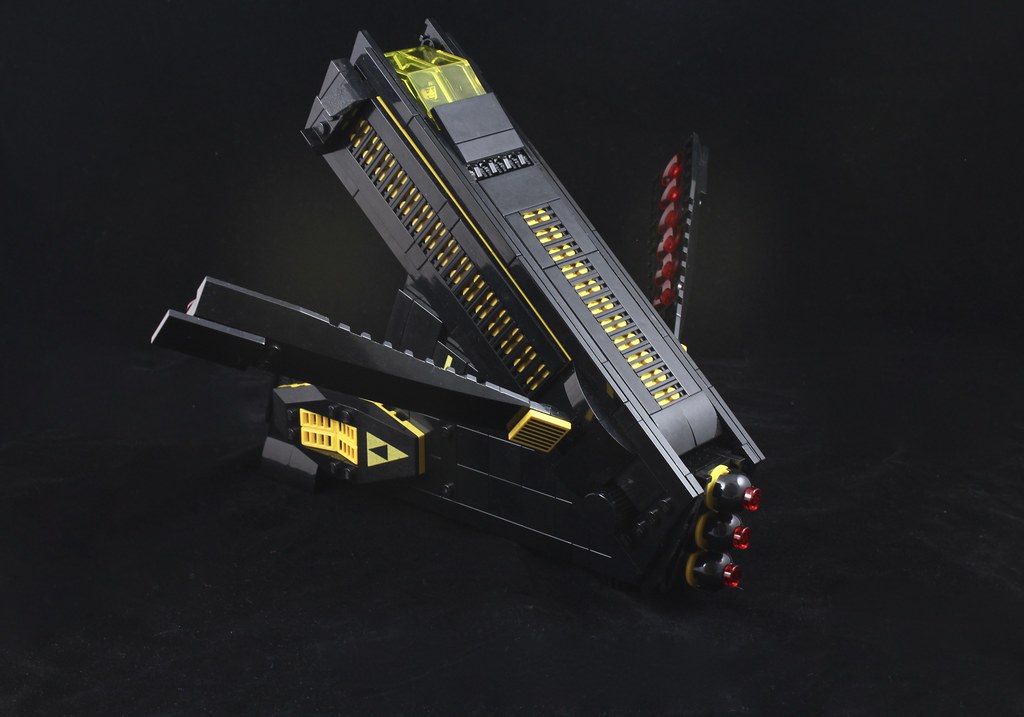 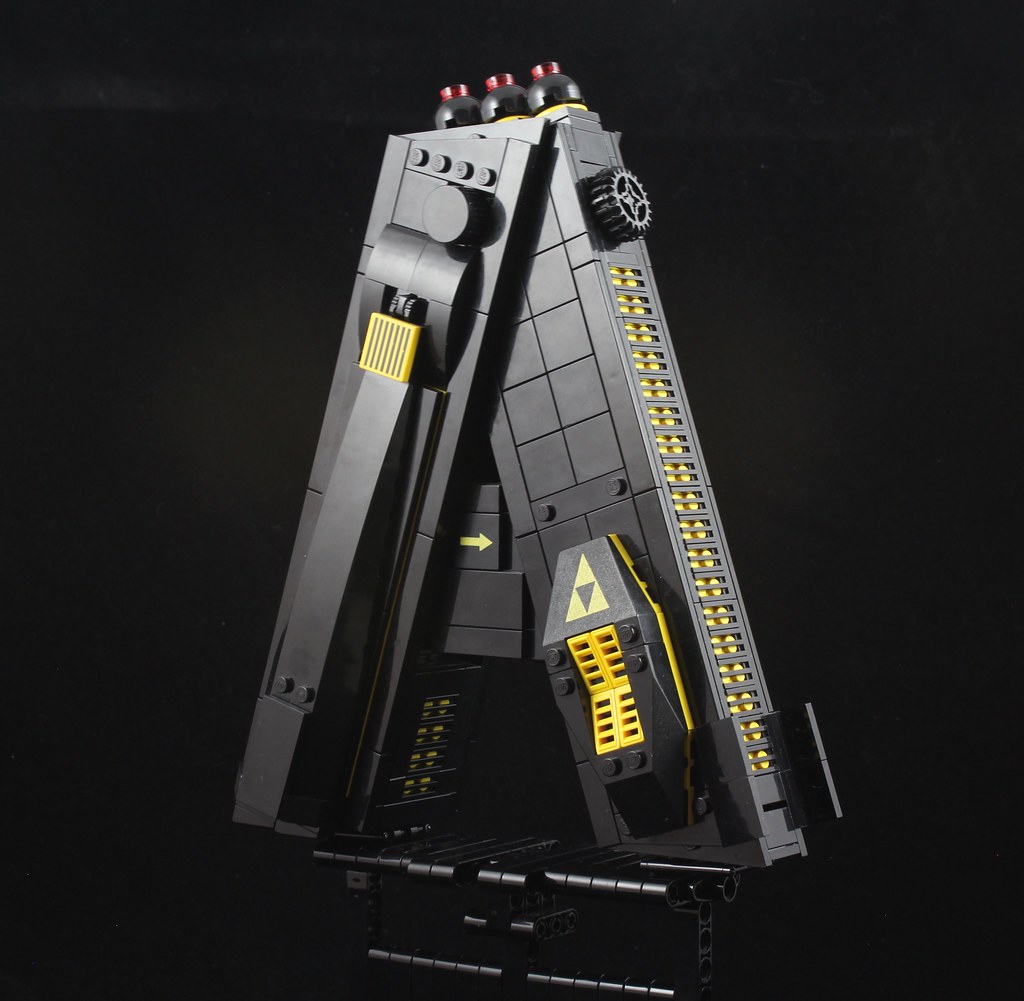 Form work is an important skill to hone when learning to write each letter early in life and it seems Dave has found an inspired way to play and teach his son. The G-wing itself holds incredible form, with a solid colour arrangement of white and lime green. All the greebling has been colour coded to the adjacent top panel, a style that I thoroughly enjoy. 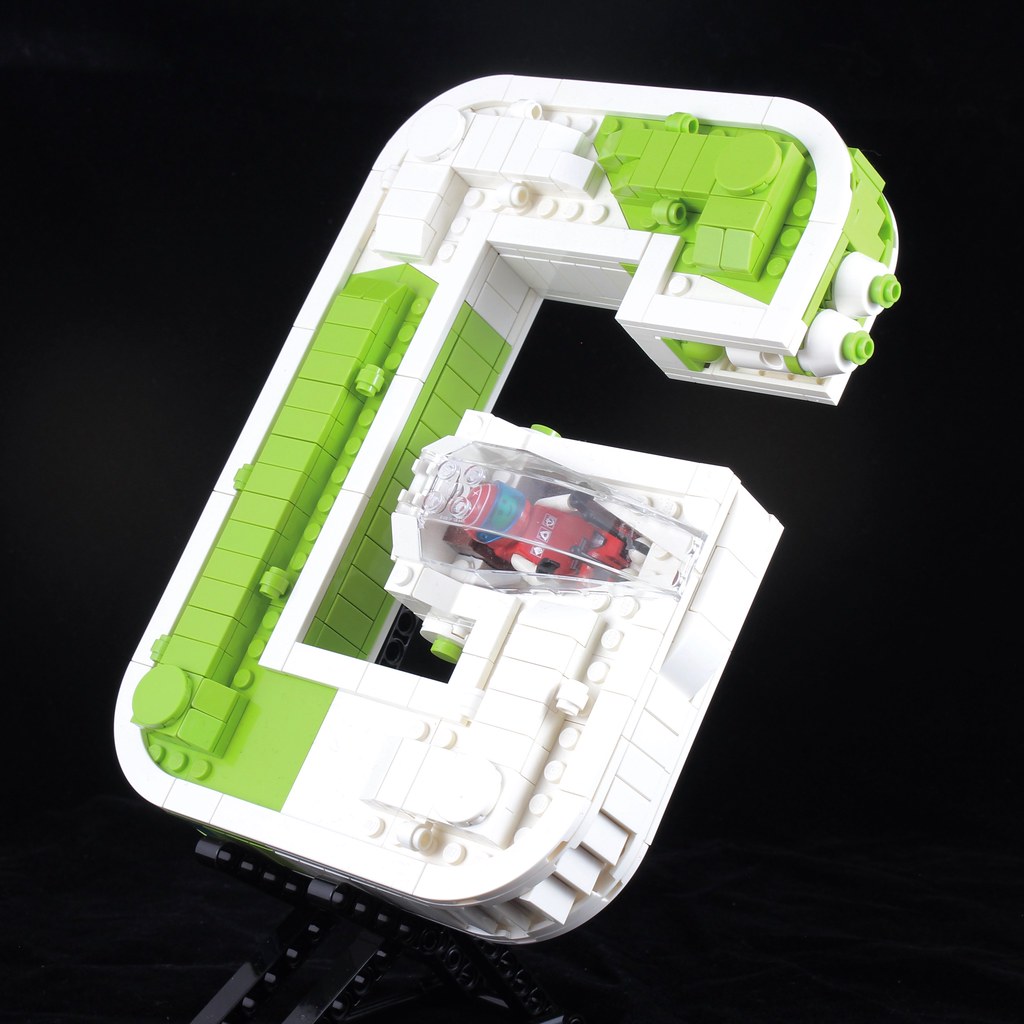 The only deviation from the two dominating colours is found around the back, at the main thruster. Millennium Falcon-esque in nature, this wide-bar engine, made from the humble 1×2 tile in trans-light blue, is a stunning way to break up its solid form. 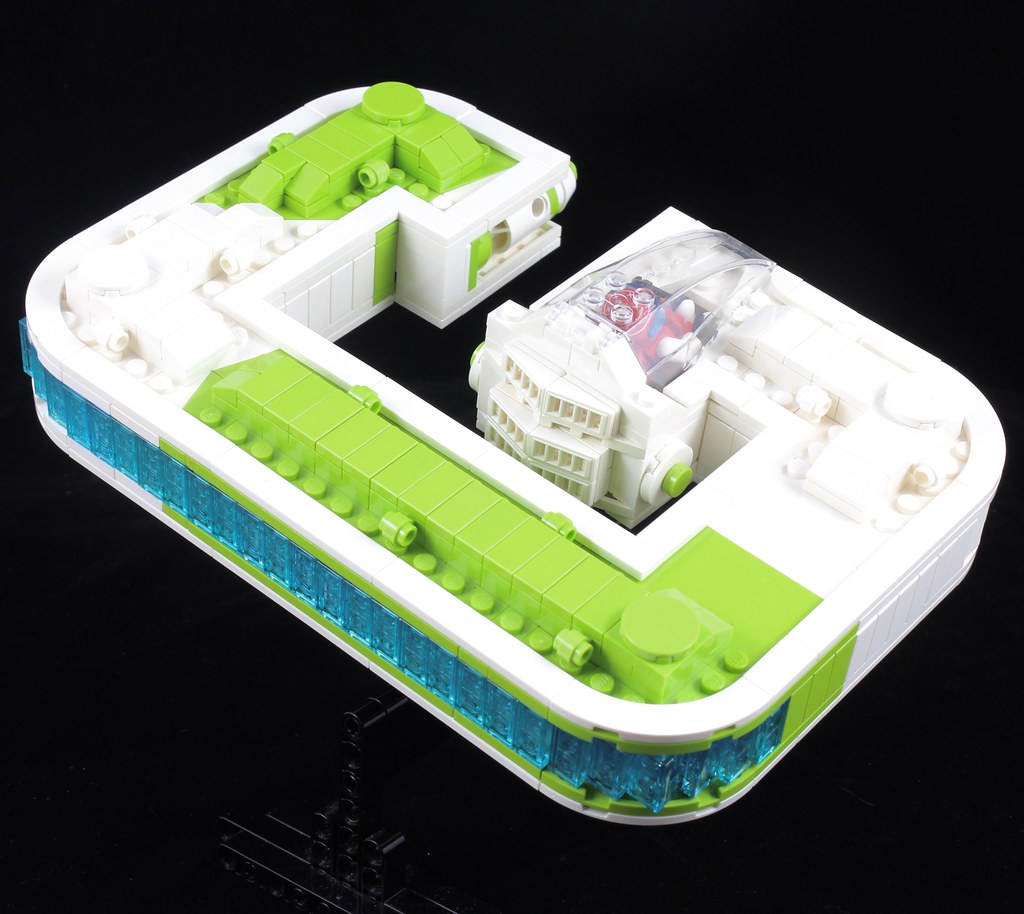 Dave’s rendition of the Y-Wing is nothing akin to its Star Wars cousin of the same name. His now-iconic delivery of dense form takes precedence, with a thick paint job of sand green, giving it a soviet-era militant feel. The use of trans-red for the canopy, side cannons and thrusters is an interesting choice. It’s not something I would normally jump at when I’m building, but this has been pulled off really well. I think I may even attempt playing around with it myself… 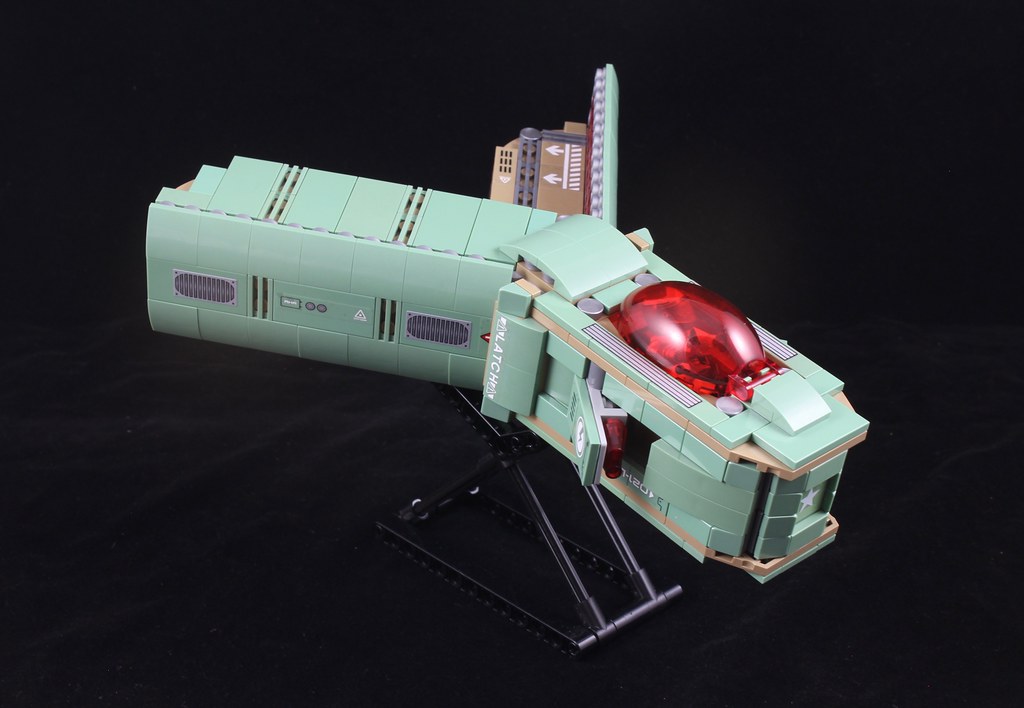 Another hinged wing set is found on its stern, though this time in a scissor mount. I’ve seen this style used well in a few spaceships but can be a tricky feature to implement cleanly. The dark tan of the interior tail fin, alongside excellent sticker choice, gives a great industrial design look, while not losing any of its functionality. 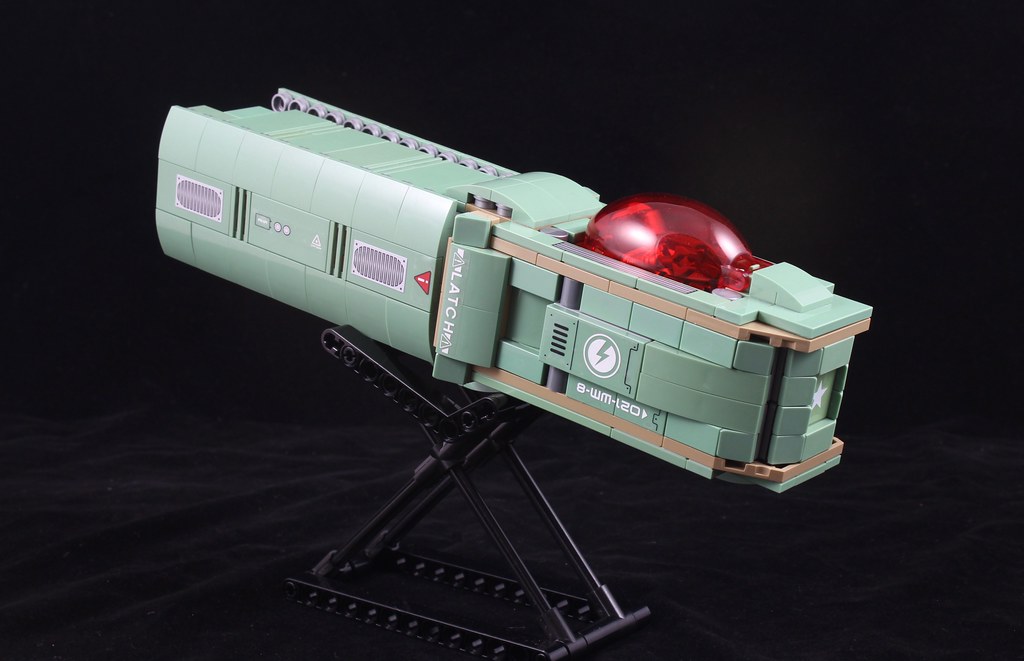 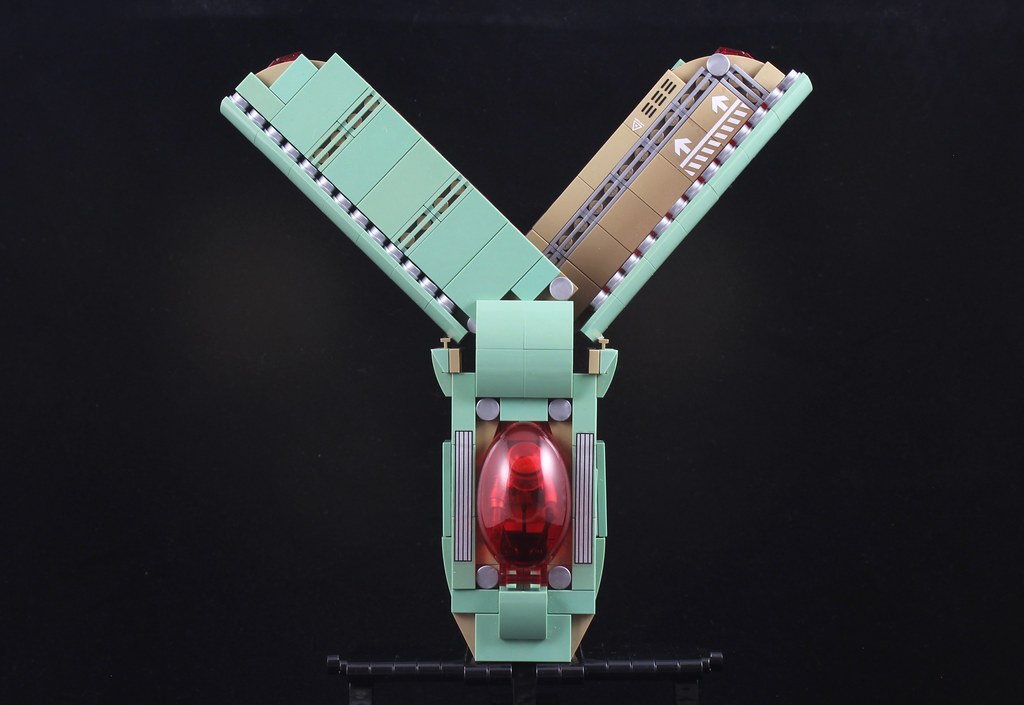 Reddish-brown is a difficult colour choice for any starfighter. This one led Dave to create a steam-punk R-Wing. The dark bluish grey framework, with cladding of reddish-brown (hopefully only resembling wood–but maybe rust?), plays a classic backdrop for a medley of Victorian-era greebles and regalia. I really enjoy the use of telescopes, 1×1 round plates with open studs and 4L bars all in pearl gold. It just feels like a simple yet very effective combination. Whatever the challenge was with the colouring presented, he’s nailed its play features, while still fitting with the theme. 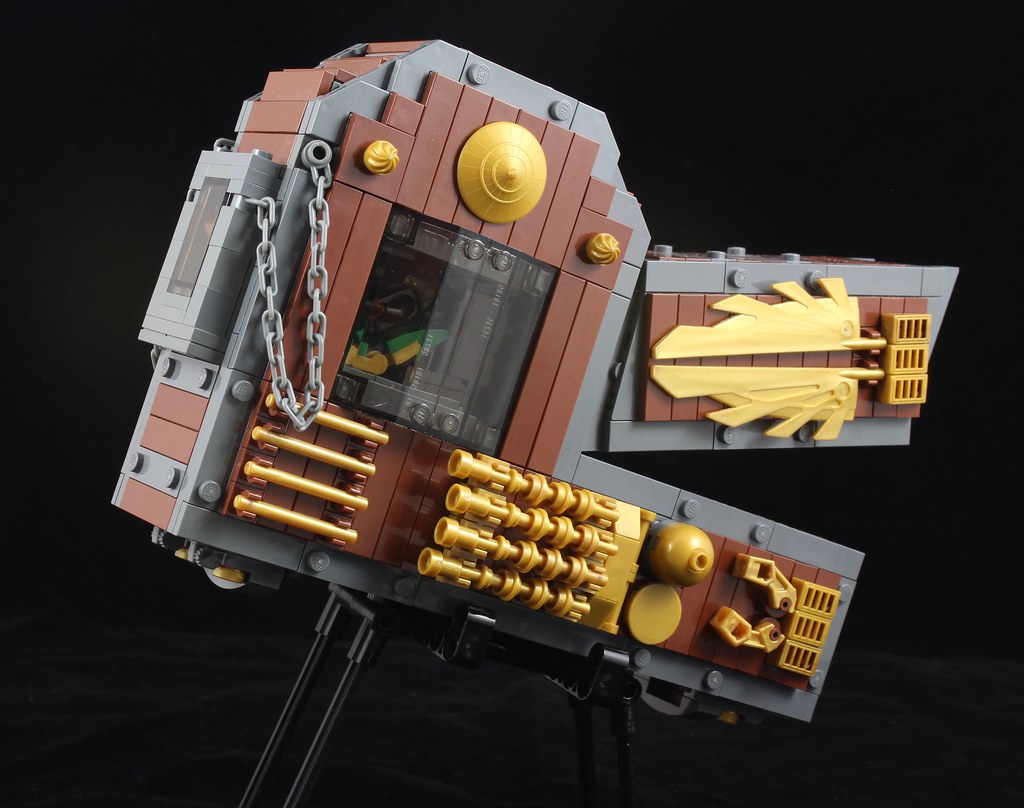 A sliding drawer-like cockpit hides a blaster wielding, Reptilian bandit. The compactness of such a frame with such a large removable cockpit, is impressive. Especially when you consider the design brief rules. The other mentionable play feature is the leg of the R, which lifts by twisting the gold 2×2 dome. 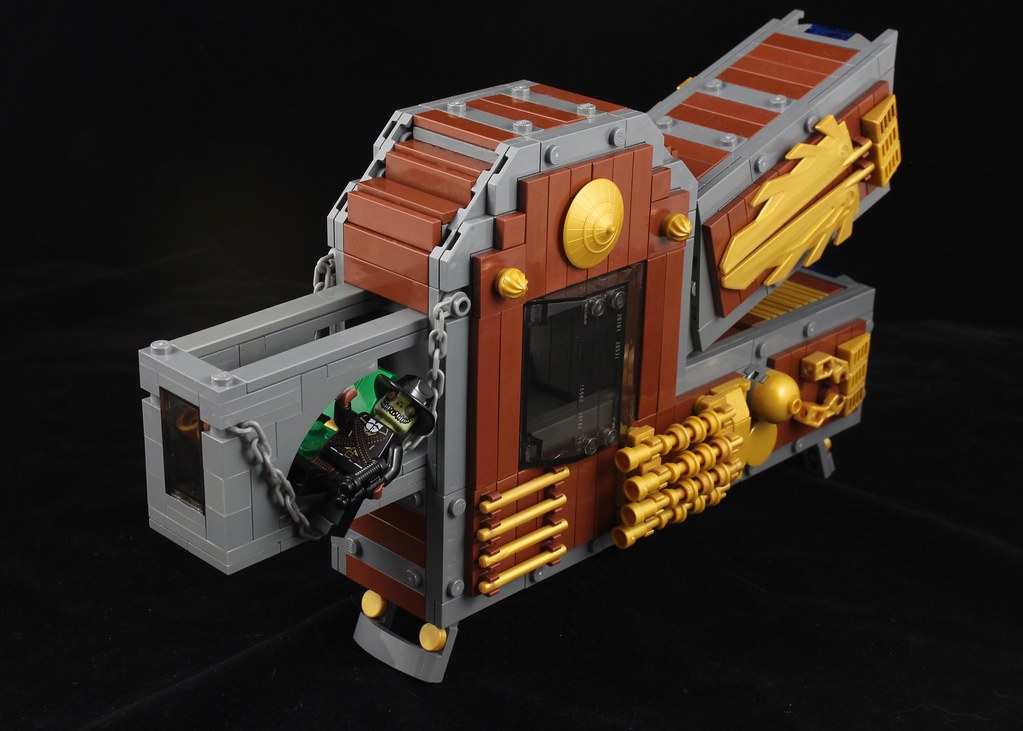 The first ship in Dave and Elliot’s fleet was the E-Wing. A sleek dream of the far off future from the 50s, the E-wing presents us with soft curves and sharp fins. I wonder if the 1959 Cadillac Eldorado Biarritz inspired the shaping? This studless starfighter was a brilliant build for the beginning of the series. 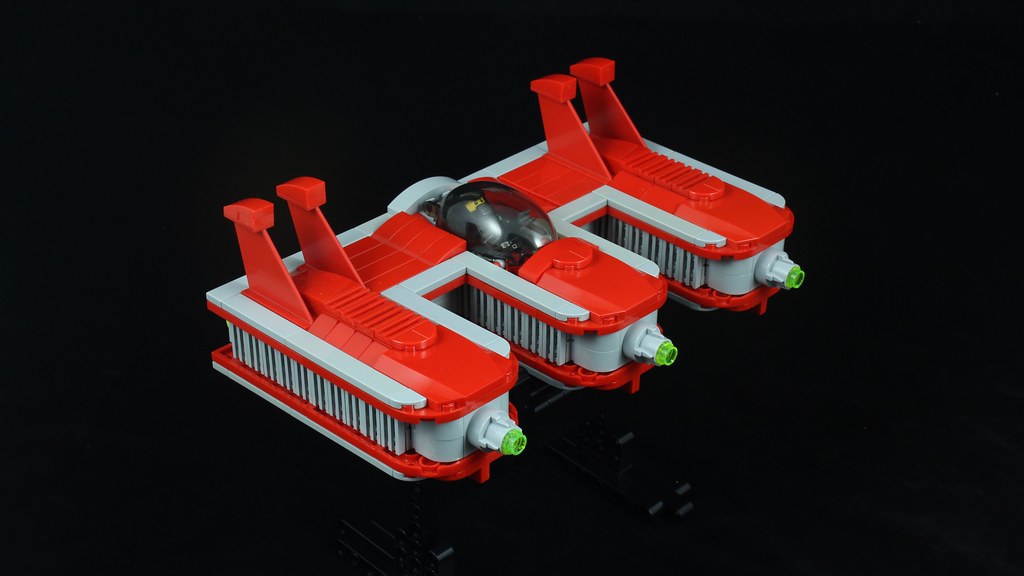 L-Wing version one and version two are a finely contrasted pair. Version one seems to have taken all its flair from a 1969 Dodge Charger, while version two pays stunning homage to LEGO’s very own Classic Space theme. I’m sure Bo and Benny would be proud. The similar shaping in these ships is pretty inescapable, so the change of cockpit placement while still facing the same direction, is a nice touch. 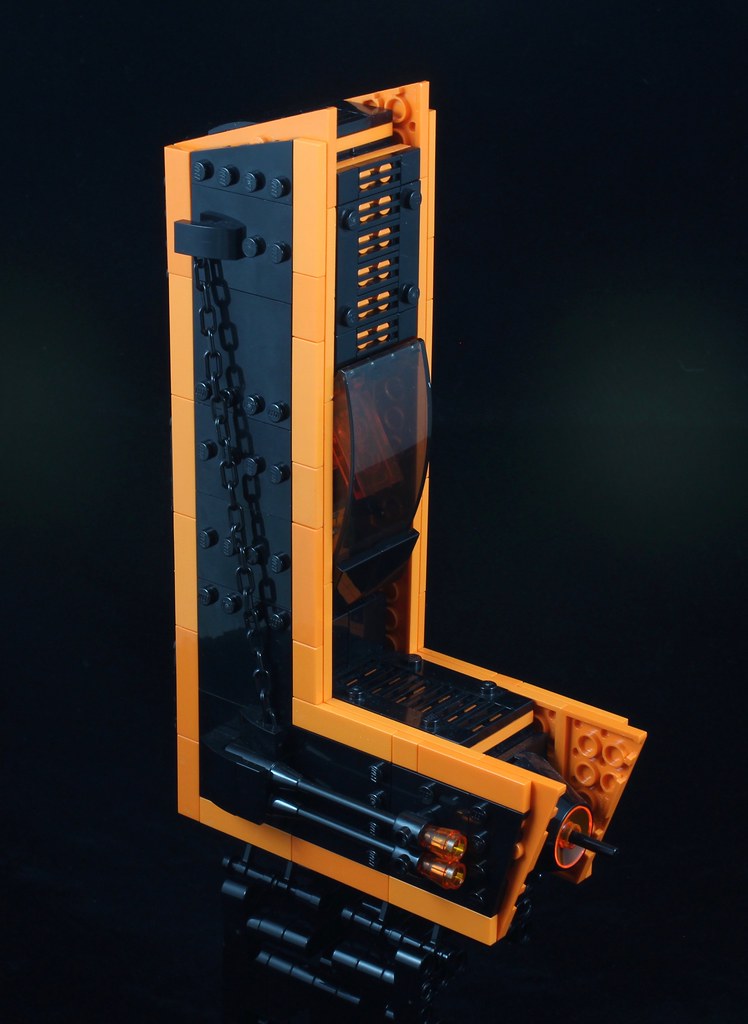 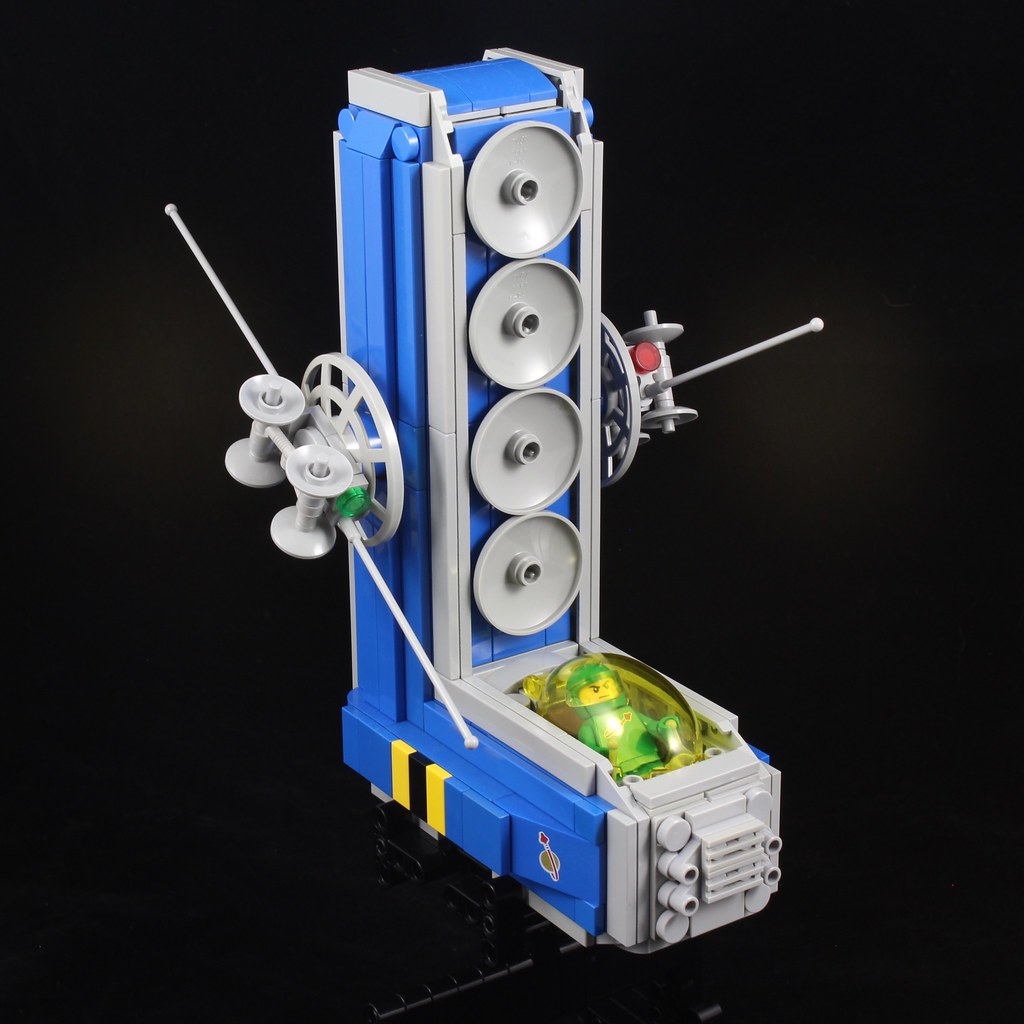 When I first looked over Dave’s ships, I was confused as to why there were two sets of L’s and two sets of O’s. Not that I was complaining, I just figured he had another 24 letters to choose from! Both L-Wings are radically different than each other, as were the O-Wings, so advancement of a style was out of the question. Then it finally clicked! (Though I think the other O-Wing was just for fun…) 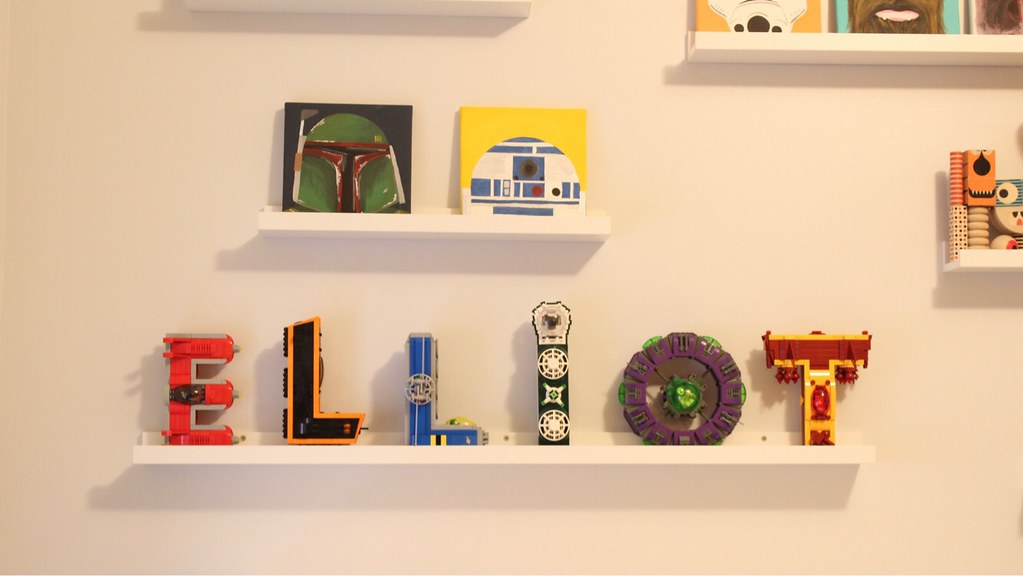 Be sure to check out Dave Kaleta’s album of Alphabet starfighters to see other angles and different letters. I’m curious to see if we get any more of these fine collaborative creations…

2 comments on “Alpha squadron, do you read me? You bet I do.”