When not writing articles about fine LEGO creations or taking care of my young children, I crawl down to my basement man-cave and build things out of LEGO. Yes, I am a bit like the dad in The LEGO Movie; and also yes, my toddlers ignore my prohibitions on touching the bricks. But some things survive the attack of sticky little fingers, and I am pleased to present the readers of The Brothers Brick with my latest.

As my alter-ego, Henjin_Quilones, I built and shared this landspeeder repair shop as part of an annual Star Wars competition on Eurobricks. Run by a Twi’lek named Veenac’ebla, the garage on Nar Shaddaa services many types of speeders, often providing them with upgrades to boost the specs. Three speeders, all loosely inspired by real-world cars, sit in the shop for repairs. The red and the grey speeders hearken to classic muscle cars (and to the M-68 from Solo), while the dark blue was inspired by curvy sports cars. 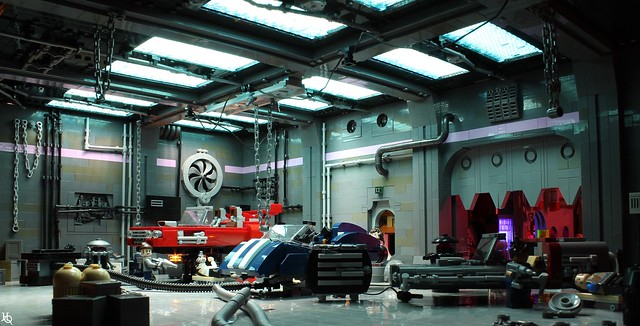 When I build, the main focus is always on the final photograph. I have never taken a build to a convention, and they don’t typically sit on a shelf gathering dust; the photograph is the only way anyone but me will see it. But I don’t just want you to see a LEGO creation, I want you to enter the picture naturally, to see the world from a four-brick high point of view. That’s why there is no edge to the build, why everything you see is part of the LEGO landscape. Even outside the blast doors, a dimly lit street scene provides depth to the illusion. Speaking of lighting, the experience fails without proper attention to light. Here I have put a desk lamp above the build, shining through hundreds of stacked trans-light blue 1×1 round plates, giving it a cool industrial glow. Lots of greebles, pipes, hoses, and vents, give the place the weathered tech look of the Star Wars universe, and the odd dark grey brick interspersed amongst the dark bluish grey adds age stains to the walls. 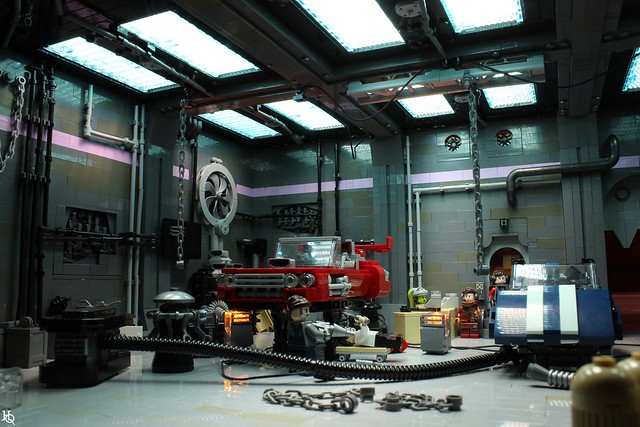 It feels like I could walk right in and ask what the going rate for my old X-34 is. Speaking of which, eagle-eyed viewers will spot the thrusters from Luke’s speeder, the 1999 version, propped in the back corner. Considering that is now twenty years ago, I must be getting old, too.

2 comments on “An immersive garage to get your landspeeder serviced”