Ice Planet 2002 might not generate quite the same level of nostalgia among adult fans of LEGO that Classic Space does, but for a certain generation of builders it surely evokes fond memories of trans-neon orange chainsaws and the coolest visors that LEGO helmets had yet seen. It does for me, at least. Bob De Quatre certainly knows how to balance the distinctive white and blue color scheme, with the trans-neon orange accents, that made Ice Planet so distinctive and immediately recognizable back in its heyday. This planetary explorer uses its extensive monitoring equipment to scan the surface in low orbit, looking for whatever it was that these frosted spacemen were trying to find. I never knew what I was supposed to be finding with those chainsaws and ski/snowshoes, but I knew my crew looked good doing it. 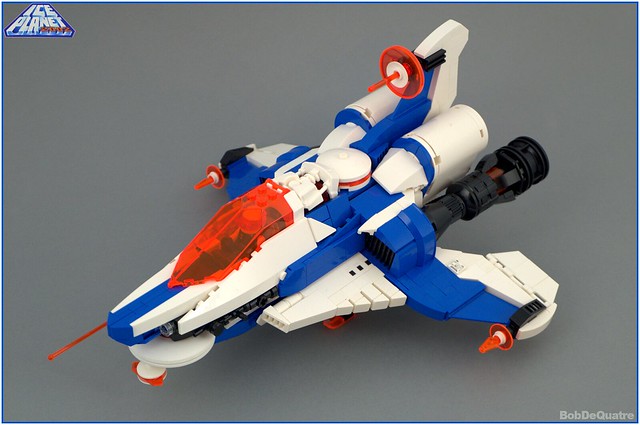 The angled faces and down-swept wings show Bob to be a master spaceship builder. Fun highlights are the feathered sections of the wings in front of the air intakes and the opening pods on either side of the tail fin, which can deploy probes to the planet’s surface for added reconnaissance. Nexo Knights’ greatest gift to builders as a theme was perhaps the introduction of many new elements in trans-neon orange, especially the angular canopy used so effectively here. But that is not all that Bob has used well; don’t miss the DUPLO radar dish beneath the cockpit and the Bionicle armor behind it. Now that’s one ice-cold spaceship.