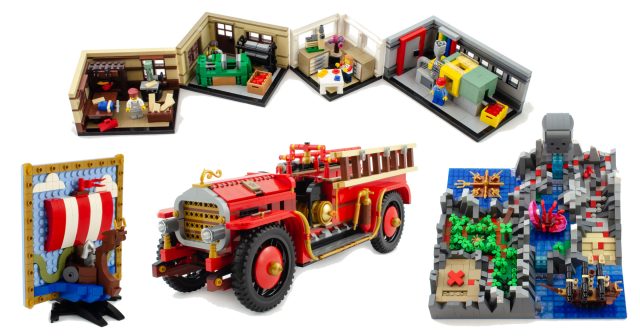 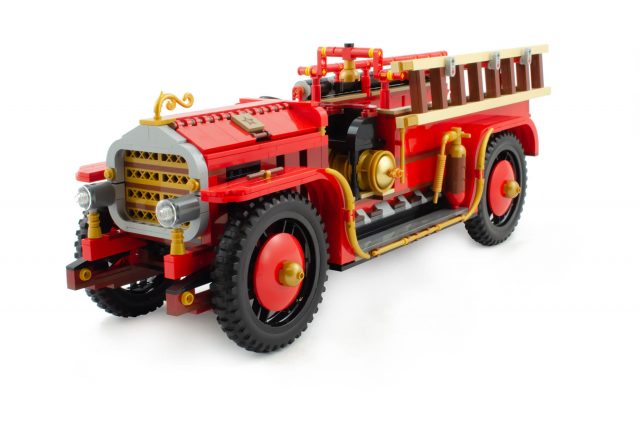 When there’s a fire, you can count on the firefighters arriving ASAP and being well-prepared to protect the community. While in the Antique Fire Truck, firefighters will ring the built-in bell to alert nearby citizens that the firefighters need to hustle to the scene. While some are readying the hose to contain the fire, the others can use the ladder to save citizens on a higher floor. An extra fire extinguisher is located on the side of the truck in case one malfunctions. After a long day of fighting fires, don’t forget to thank and celebrate these heroes for rescuing your fellow citizens! 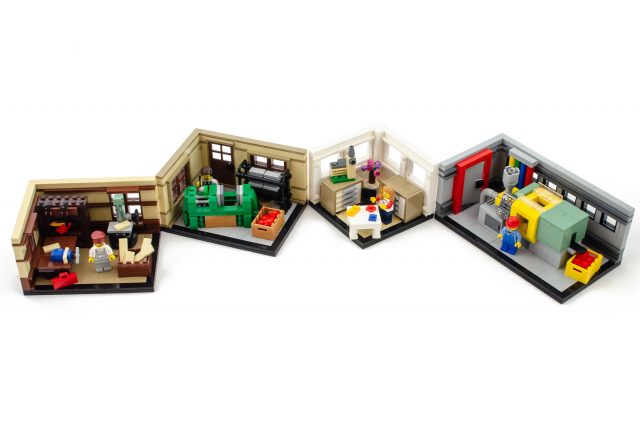 Since it’s the 60th anniversary of LEGO Brick, what’s a better way to celebrate than taking a look back at how it all started? Build an individual vignette for 4 different eras of LEGO’s history starting from 1937. Ole Kirk Kristiansen bought his first milling machine, and the company only made wooden toys (have you spotted the wooden duck?). In the second vignette, LEGO started molding plastic bricks in 1946. The third vignette is of a designer’s office to represent designers working on the amazing LEGO sets that we all are familiar with. Finally, in the fourth vignette, you can see a modern molding machine with a complicated tubing system in the background. That’s where the raw materials “travel” to the big molding machines that make LEGO bricks. Display all the vignettes together, or put them in different places, to share the story of LEGO! 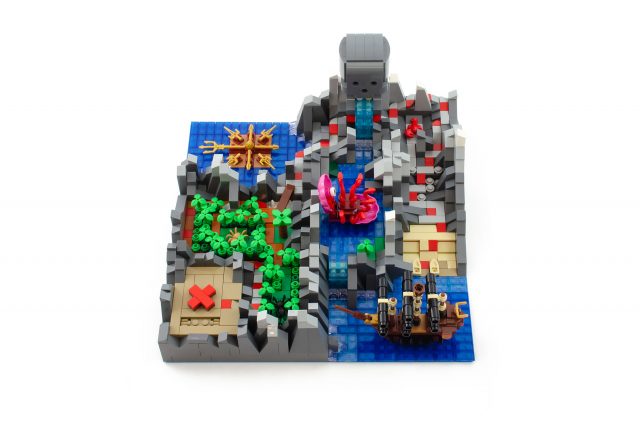 What exactly are the various dangers on the Isle of Peril? Just in case you, or any member of your crew, are too curious to stay on the marked path, we’ll tell you just a few things of what you’ll face! Just above the steep beach, in the rocky entrance into the canyon is “The Cave of No Return.” The backside opens into a small ledge overhanging “The Lake of Doom,” where one can a plunge into the lake if one isn’t careful. Look out for “Laudably Large Land Lobsters” and the “four-tentacled six-snake-headed one-eyed colossal-clam-beast.” After passing through the waterfall, travel downward toward the lowlands to a dangerously dilapidated wooden bridge over inordinately large spikes. Follow the path marked in red on this 3D treasure map, and if you’re lucky, you may find the buried treasure. 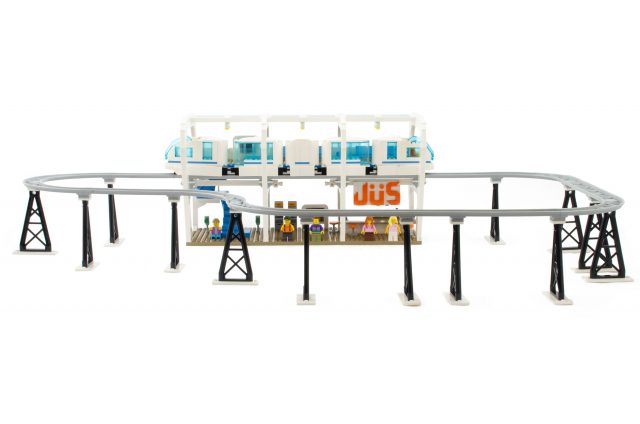 The Skyline Express is the ultimate solution for the minifig commute. With room for up to six passengers, panoramic windows and sleek Scandinavian design, this modern light rail is the perfect balance between comfort and style. The split-level station provides travelers with the latest schedule information and convenient smart ticketing machines. Have some time to spare before departure? Get fresh juice at Jüs, the organic juice bar located on the ground floor, where it can satisfy even the thirstiest passenger! After getting your train ticket and refreshments, make your way up the stairs to take in the breathtaking views. 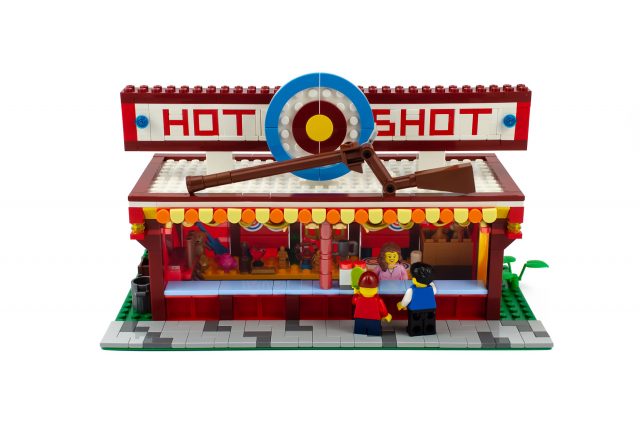 Opt for a night out at the carnival and stop by the Hot Shot, a shooting gallery where you can get some target practice! From afar, you can spot the billboard for “Hot Shot” with a large rifle and bullseye attached. When you get inside the carnival, take a walk around and treat yourself to an ice-cold popsicle. Then when you are ready for a little friendly competition, look for the booth with the red wavy walls and yellow and orange overhang. If luck is on your side, you can win prizes like a life-sized teddy bear, special edition guitar, and a few other surprises! 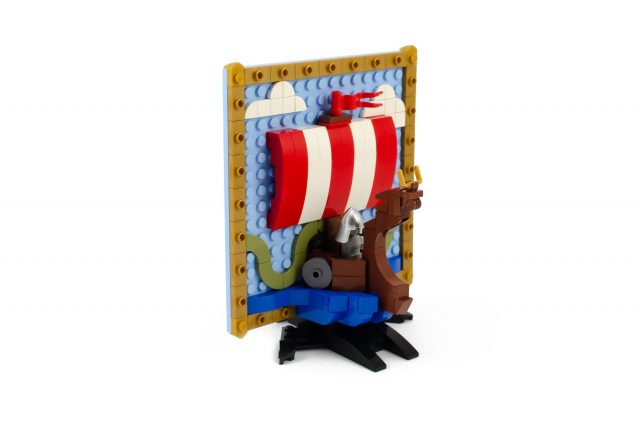 There are some things you cannot escape (like your desk), but you can escape a sea monster that has vicious means of destroying your Viking ship. Don’t let the blue skies fool you! Armor up and prepare for battle against not just the sea monster, but the raging waters your Viking ship sails on. Be brave and soldier on! Lead your ship to safety, and your fellow citizens will reward you with priceless treasures. 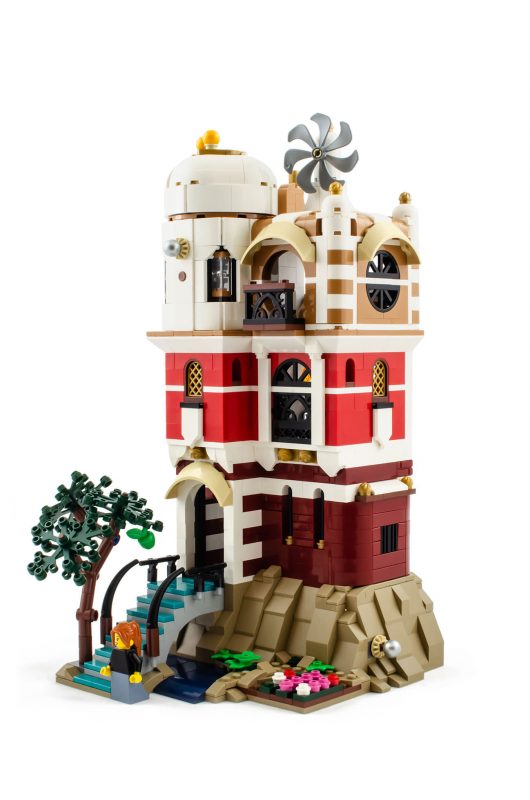 Cross a small bridge over a stream and underneath an apple tree to get into the Science Tower, a multi-colored, four-level building. A pair of scientists and their trusty hound work here and are up to new discoveries! Shadow them around the tower to learn more about their experiments, or do your own research in the library. As day becomes night, climb up to the top floor to test out the astronomical telescope in the observatory. Challenge yourself to identify all scientific experiments and inventions! 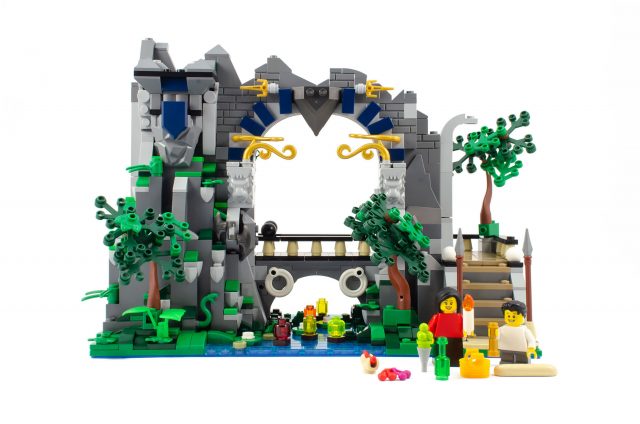 Join two minifigures as they explore the ruins of Clovershire Castle! It’s a perfect day for a picnic, so they bring along a loaded picnic basket, a telescope, and a candle for exploring. What could be hiding in the castle ruins? Follow the stairway behind the ruins and over the bridge to find the hidden crystal, but beware of the snake down by the stream! Once you’ve finished exploring Clovershire Castle, head to the Festival of Lanterns to add your lantern to the ones floating in the water.

The second half of the AFOL Designer Program finalists will be announced next week, with pre-sales of the 16 projects beginning February 1st. Successfully crowdfunded designs are planned to ship in April.