I used to think that a dragon without wings was simply a lizard, but I wouldn’t dare say that to the face of this wingless dragon built by Leonid An. His name is Glaurung the Fierce, and with his athletic, lean build and large claws, this dragon looks like it could easily rip any opponent to shreds, especially a heckling human who dares mock his lack of wings. 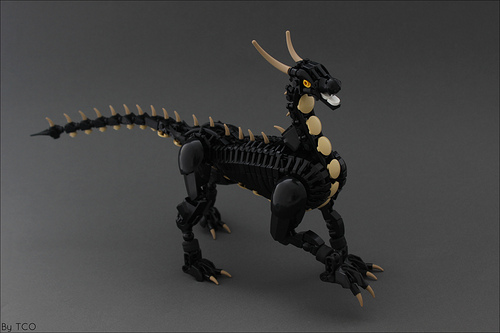 What I love about this dragon in particular is the way the builder has used repetition throughout the body, neck, and tail to achieve a very clean organic figure. For example, the robot arm piece is used at least twenty times, laced through flex tube to give both the subtle and more drastic curves the body of the dragon required. The 2×2 round tan boat studs are used as armor plating from the top of the neck of the dragon, all the way down underneath the belly to the tail, making for a wonderfully consistent aesthetic.

6 comments on “It’s not wings that make the dragon, but the ferocity of his character”