Developing a shortlist of the finest LEGO creations of 2018 was difficult enough, but narrowing it down to a single “best creation” proved even harder! However, after much debate amongst the team, the Brothers Brick is delighted to announce the Jakku Star Destroyer collaborative build by Eli Willsea and Grant Davis as our LEGO Creation of the Year for 2018. 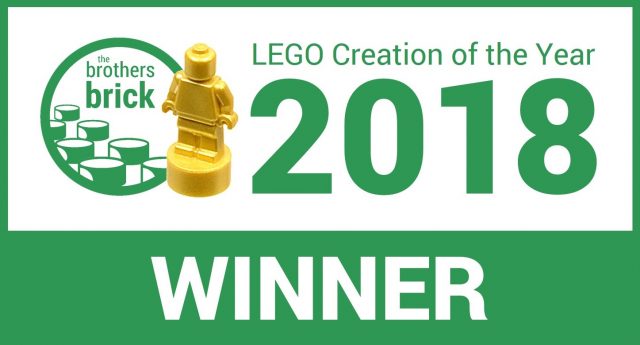 Eli and Grant took us to a galaxy far far away and to the desert planet of Jakku. Here we find Rey the Scavenger abseiling into the interior of a crashed Star Destroyer. This stunning LEGO diorama saw excellent photography and lighting effects coupled with an ambitious build — capturing the sense of beautiful desolation and decay of the early scenes of The Force Awakens.

Some models are built to be played with, some are built to be art, and some — like this — are built to perfectly recreate a moment from their source inspiration. As one of the TBB team said during our discussions: “Just imagine the planning and research that had to go into it — finding that one angle to make that single shot worthwhile. I believe that’s all they released. One shot. And it was just perfect.”

To give some idea of the effort that went into this creation — and the sheer scale of the creation — take a look at the time-lapse build video below, which includes a close-up look at the greebly detailing and depth of texture built into the walls, and the crashed TIE Fighters and shuttle buried in the sand…

Star Wars is a popular LEGO building theme, and we sometimes feel like we’ve seen everything that can possibly be put together based on that universe. And then something like this comes along — an ambitious build, photographed beautifully, that sets a new bar for what a LEGO creation can be. That’s why Eli Willsea and Grant Davis‘s Jakku Star Destroyer is our LEGO Creation of the Year for 2018.