LEGO owner Kjeld Kirk Kristiansen is famous for his love of Ferraris, and has been known to show local Danish LEGO fans around his garage full of them. So it’s no surprise that LEGO has had a longstanding partnership with the Italian supercar maker, going back more than 20 years and spanning multiple themes and even systems, from Duplo to Technic. The 2019 Speed Champions 75890 Ferrari F40 Competizione features the sleek supercar built between 1987 and 1992. This version includes 198 pieces and retails for the usual $14.99 (£12.99 in the UK and $19.99 in Canada). 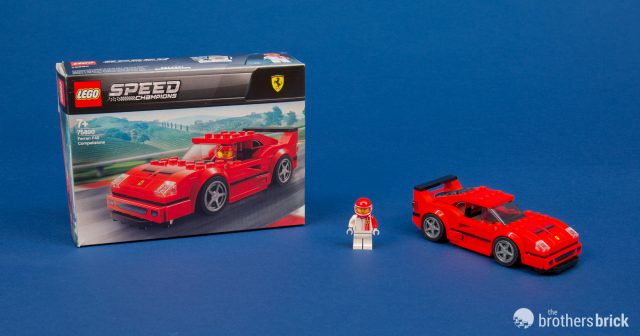 The box, packaging, and sticker sheet

We’ve come to expect a certain format for LEGO Speed Champions box art, and this one is no different, featuring a racing scene on the front, with several more angles and photos of the real-life car on the back. One interesting difference from other LEGO packaging is that the licensor — Ferrari, in this case, obviously — affixes a holographic sticker to the side of the box indicating that it’s an official Ferrari product.

The parts come in several unnumbered bags, plus two paired sets of hubcaps (a total of four sets), with the chassis and sticker sheet loose alongside the instruction booklet. 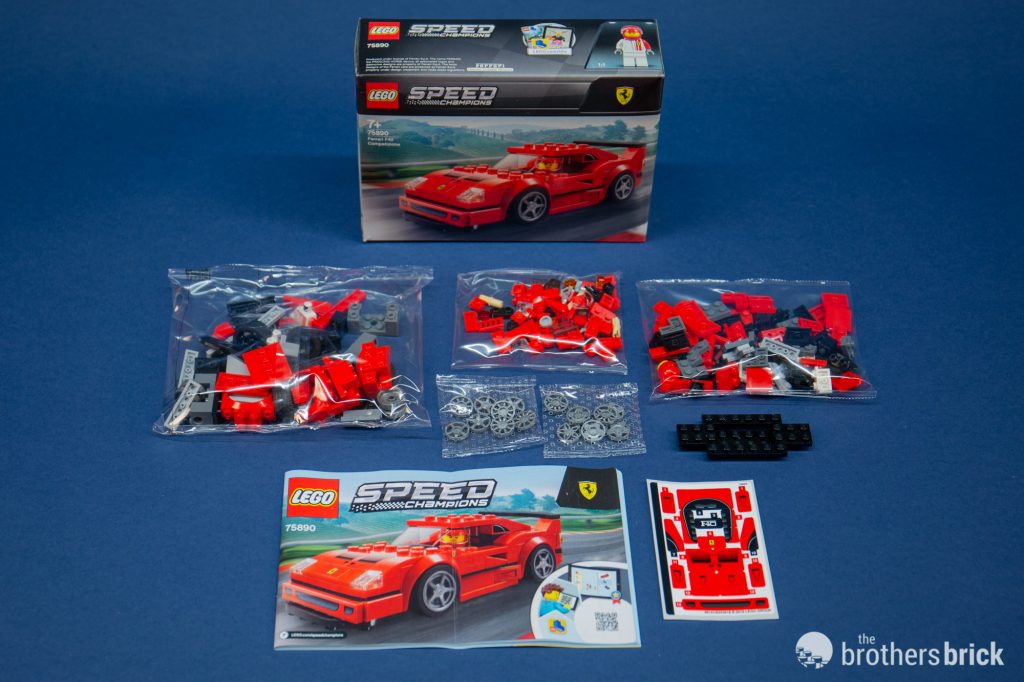 Looking at the finished, mostly red model on the box, you wouldn’t expect a huge sticker sheet, but the included sticker sheet does include extensive insignia, intakes, and other subtle details. 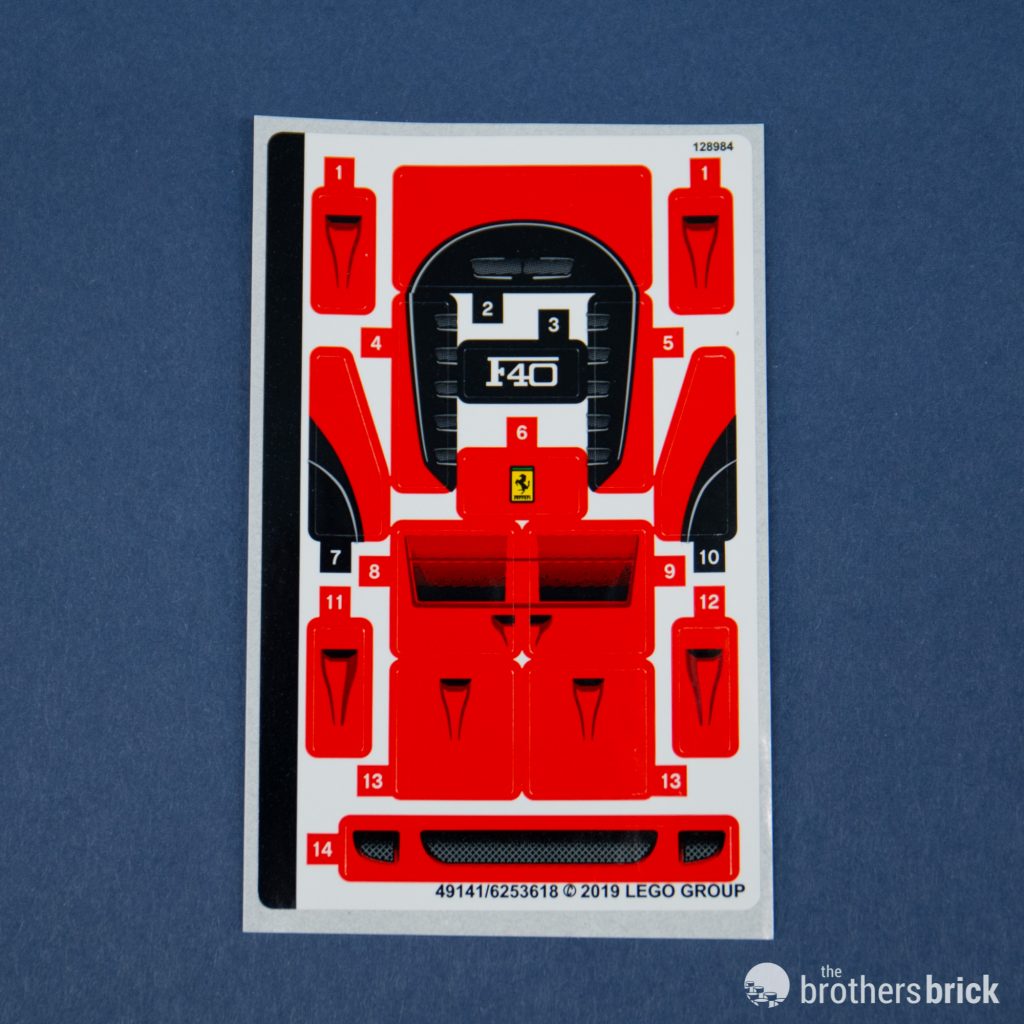 Although the build itself is quick (other than applying stickers constantly along the way) and follows the same basic supercar pattern that most LEGO Speed Champions have followed since the line’s first sets in 2015, the set does include several interesting new parts. Most spectacularly, the Ferrari logo is printed on the side of a 1×1 plate, enabling the inclusion of a key detail that would be impossible to achieve with stickers. Similarly, black 1×1 plates are printed on one side with red for specific places on the car where one exposed corner is red and the other black. (The finished car uses two of each, but there is one extra plate included.)

LEGO has been including two sets of hubcaps in separate polybags since the first Speed Champions sets as well, so when one vehicle includes variants that use hubcaps from two different polybags, you end up with four sets in the LEGO set. The Collectible Minifigure stand is beginning to show up in a variety of places as an integral part of creating relatively smooth 4×3 surfaces, and this set includes this existing part in red for the first time.

The set includes parts to convert the Competizione model into the standard road car. We’ll return to that in the next section of the review.

The version of the Ferrari featured on the box is the Competizione model created for racing teams, with black accents on the base red body color. Many of the earliest Speed Champions sets didn’t take advantage of the many small curved pieces that have been introduced in the past several years, and looked like square-ish 1980’s era supercars, even though they depicted contemporary, sleek cars like the LaFerrari. 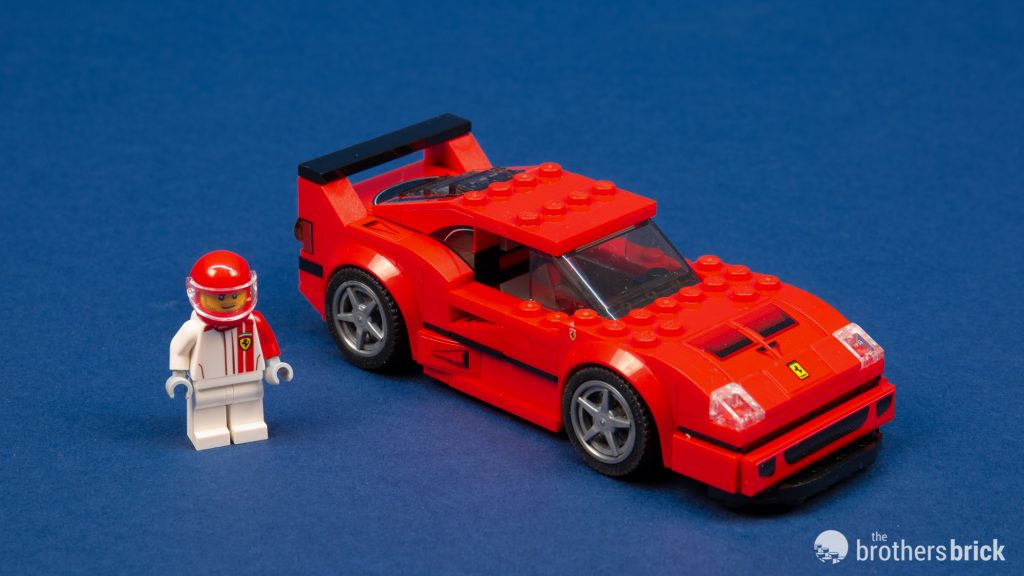 The squared-off side panels, front bumper, and back end of the car all capture the look of the 1980’s Ferrari perfectly. 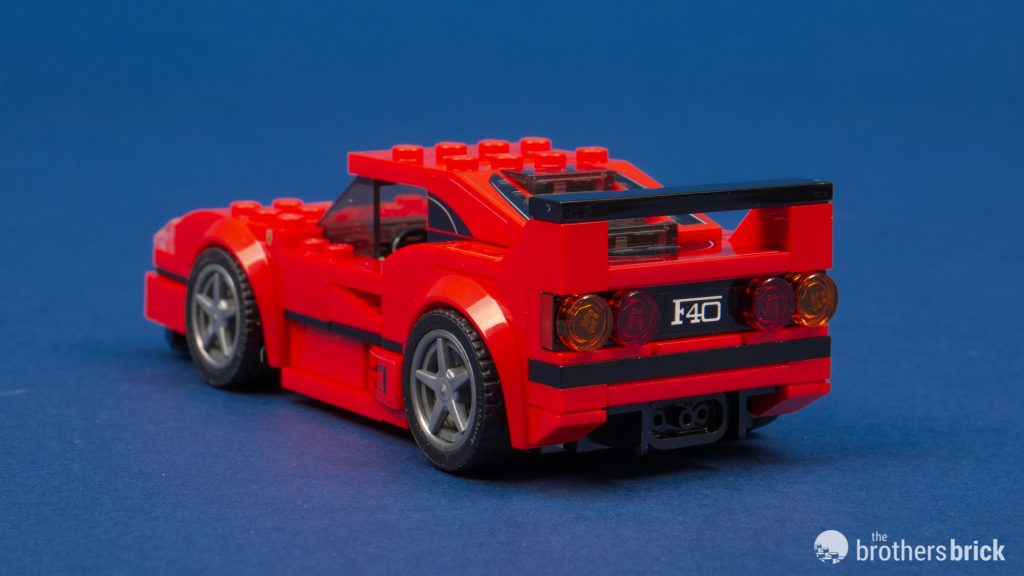 The rear window is built from stepped 1×2 trans-smoke tiles between heavily stickered 1×4 slopes. 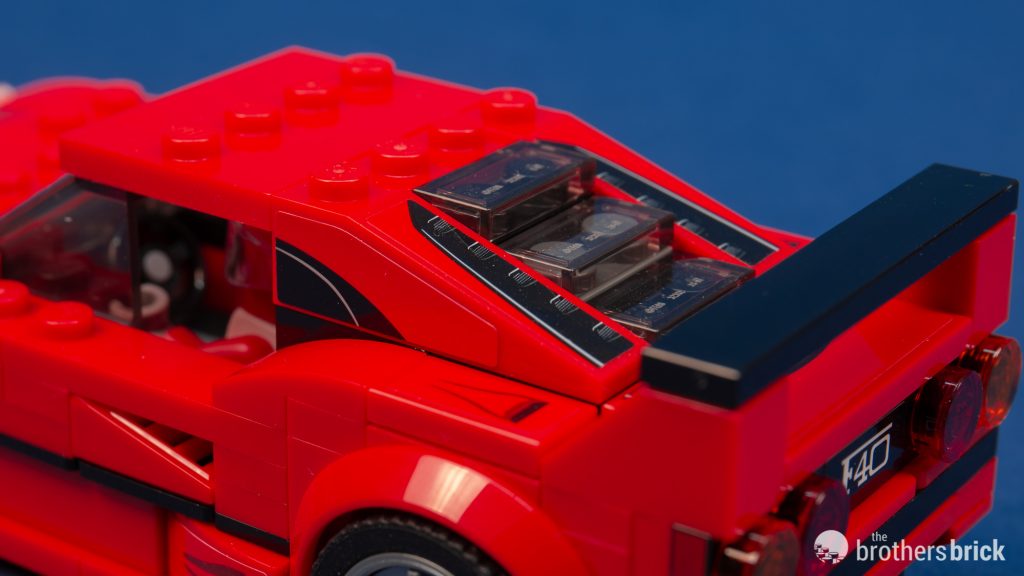 By removing the black 1×6 tile on the spoiler, all four hupcaps, and part of the front hood, you can convert the default Competizione model into the standard road car. 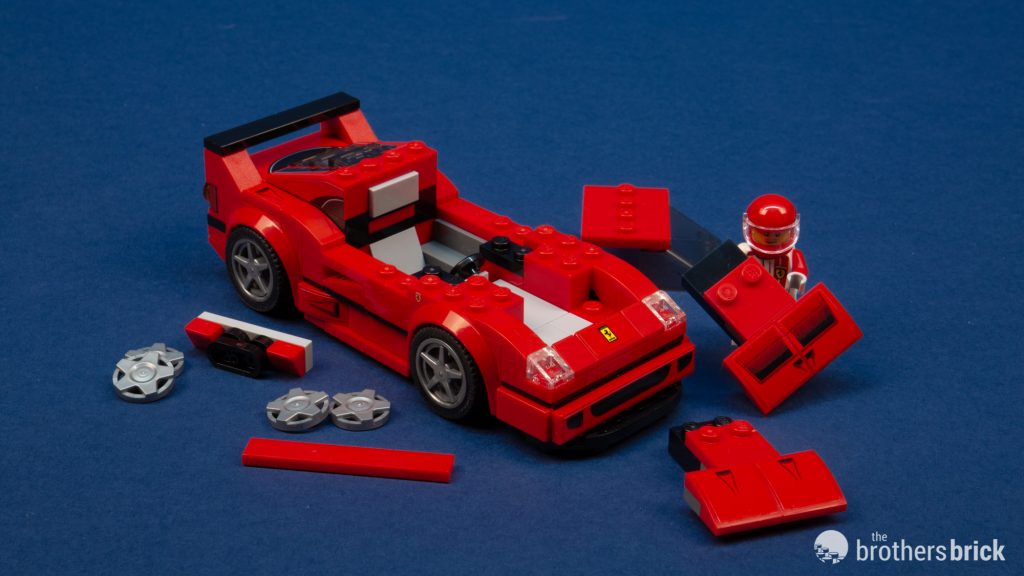 The differences are subtle, and the nearly all-red color lacks some of the visual interest of the race car version with its larger proportion of black accents, so it’s no surprise that the Competizione was chosen to be the “hero” version for the set’s name and box art. 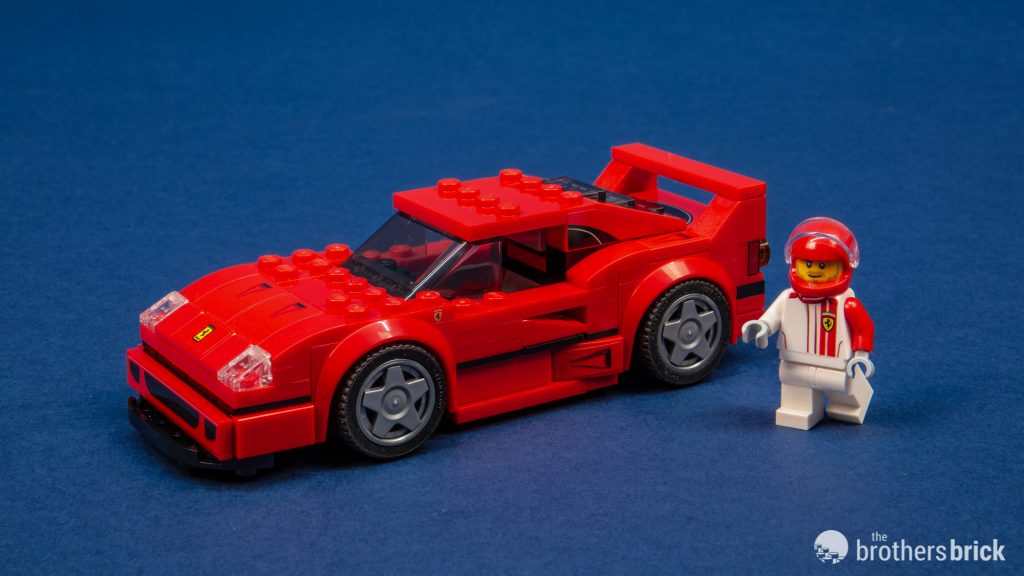 The road car lacks the race car’s diffuser, so the rear fender piece gets swapped out as well. 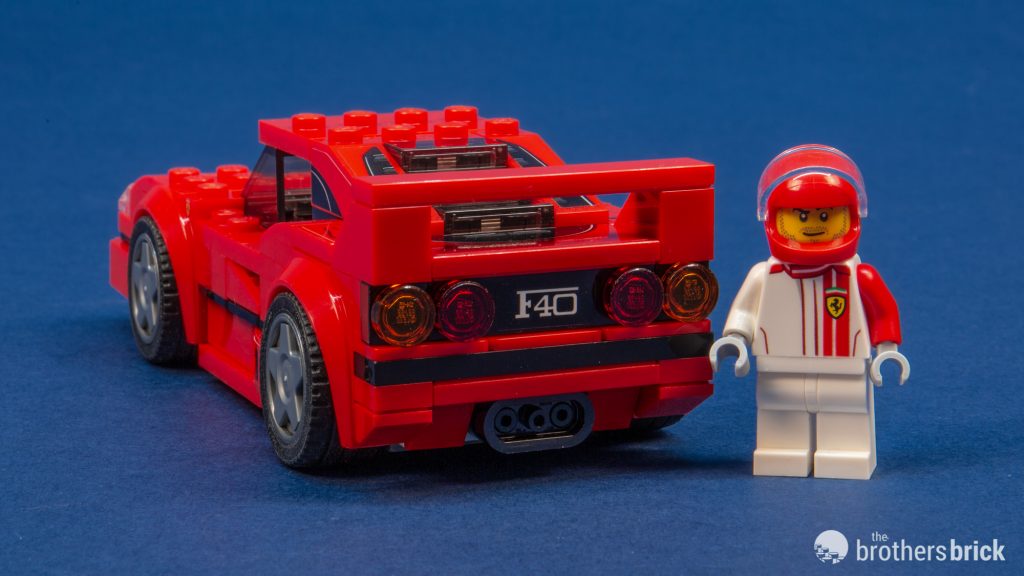 The driver minifig is fairly standard-issue, though the torso printing is new. He wears a racing jumpsuit with red stripes and the Ferrari logo.

It would be an odd lineup of LEGO Speed Champions sets not to include a Ferrari. And we’ve mentioned in previous reviews that it’s lovely to see historically significant vehicles included in the lineup. However, as many times as the F40 may have been featured on “Top Gear”, the F40 is an odd choice as one of the few standalone historical Ferraris, when the beloved Testarossa has yet to make an appearance in LEGO form. Admittedly, the F40 with its angular spoiler is a more striking car than the iconic Testarossa that appeared in 80’s TV shows like Miami Vice. 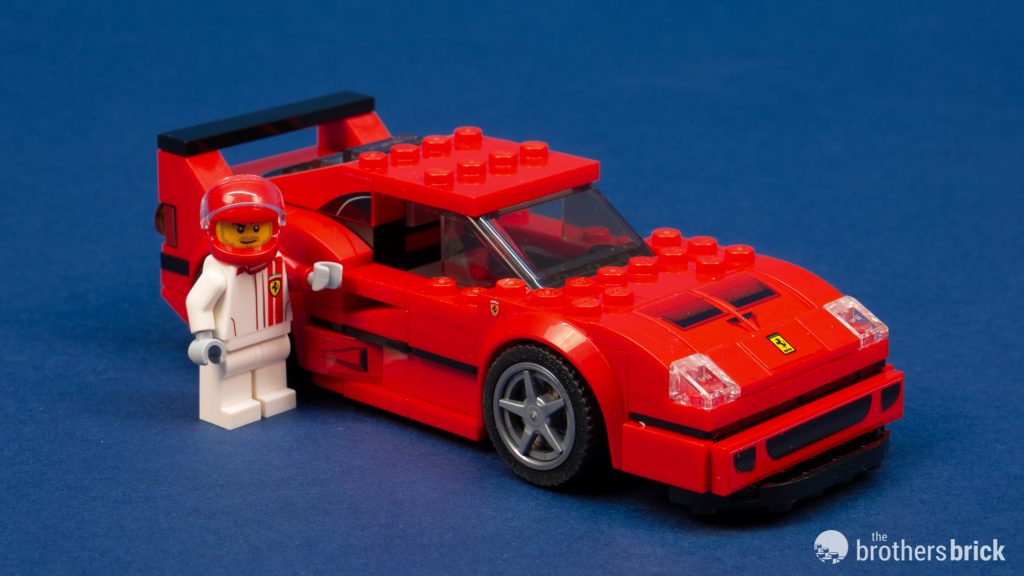 It also feels a little odd to be recommending a LEGO set for one or two unique parts — but the side-printed 1×1 plates are simply fantastic. Overall, then, for about $15, you get nearly 200 parts to build two versions of a historically significant (and to some nostalgic) Ferrari from the 80’s and early 90’s. Even if you’re not a LEGO Ferrari or Speed Champions completionist, you can’t go wrong with this new (old) Ferrari.

Be sure to check out our reviews of the other 2019 LEGO Speed Champions sets: