There’s a new product in the increasingly crowded third-party custom brick world. Mbriks are a way to bring new life to your LEGO (and compatible brands) building bricks by adding additional dimension and display options. These custom magnetic bricks have shown a lot of promise in the professionally produced videos and other promotional material during the month-long Kickstarter campaign ending this week, but we wanted to weigh in ourselves. 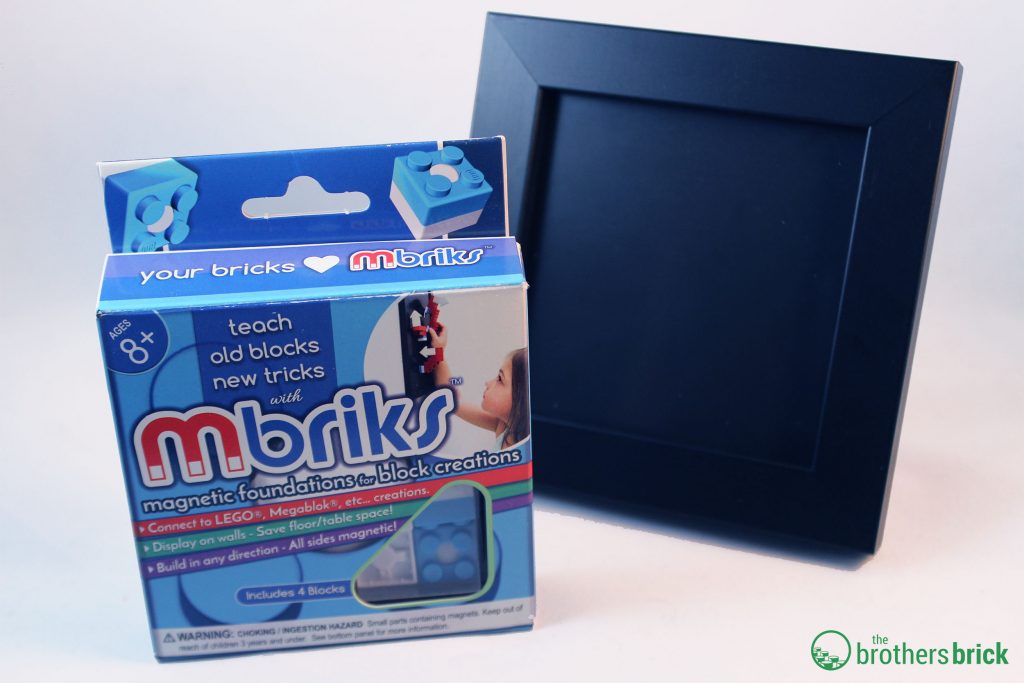 [Note: We received a pre-production version of Mbriks, and we now understand that some of the issues highlighted in this review may have been resolved in the final production version that will be shipped to Kickstarter backers.]

A brief history of LEGO and magnets

LEGO has a long and evolving history with magnetic bricks. As new and stricter consumer protection laws have arisen to address the dangers of ever-stronger magnets, LEGO has introduced a range of different magnet products. The changes along the way generally served to encase the actual magnets in more plastic and behind screwed access panels. The strongest LEGO magnets I own are the multi-colored 2×4 bricks which were last produced in 2004. You can see the risks of this piece below: the magnets, although glued inside the brick’s tubes, could still theoretically come out and become a choking/pinch hazard. 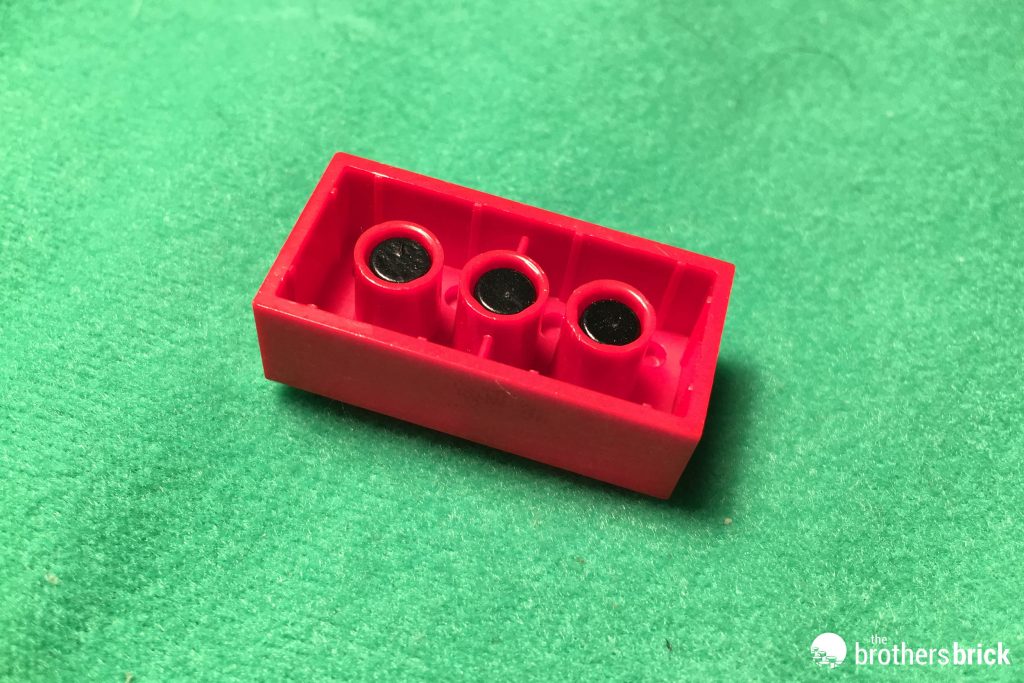 Enter Mbriks, the brainchild of creator Evan Grove who lays out his pitch:

What if you could give LEGO® blocks (and Mega Bloks®, Kre-O® blocks, etc…) new, gravity-defying, multi-directionally magnetic powers? With Mbriks™, you can! Just build Mbriks™ into your compatible block creations to display them in amazing new ways on magnetically receptive surfaces.

With so much promise on the Kickstarter project, we were excited to get our hands on this product. Our review copies came in the mail and we set to work. The packaging is vivid if a bit busy, selling the many positives about the product. Our review set came with 4 Mbriks.

Our review copies each also came with a frame fitted with a magnetic insert. Naturally, the first thing we tried was placing the bricks on the frame, and the results were quite satisfying. 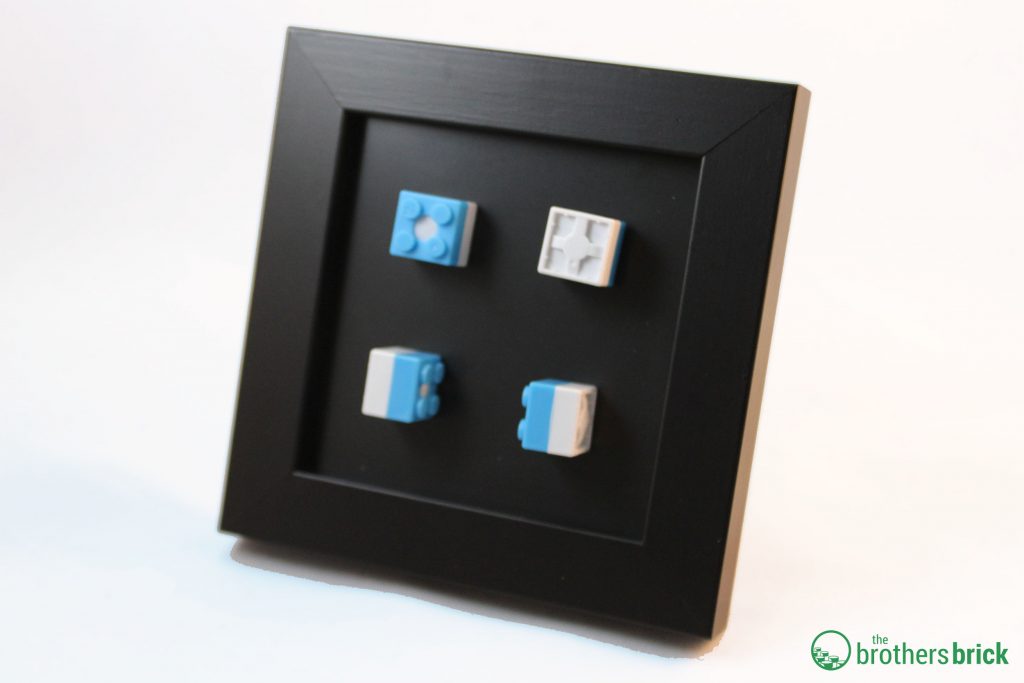 Putting the Mbriks magnetic bricks to the test

We used multiple LEGO models and minifigures paired with various Mbriks orientations to experiment on several different surfaces. Refrigerators, whiteboards, steel posts, a steel door, and the provided sample frame were all tested. We wanted to challenge the extent of the bricks’ magnetic attraction during this review. We found that BrickHeadz were an easily modifiable starting point for our experimentation. 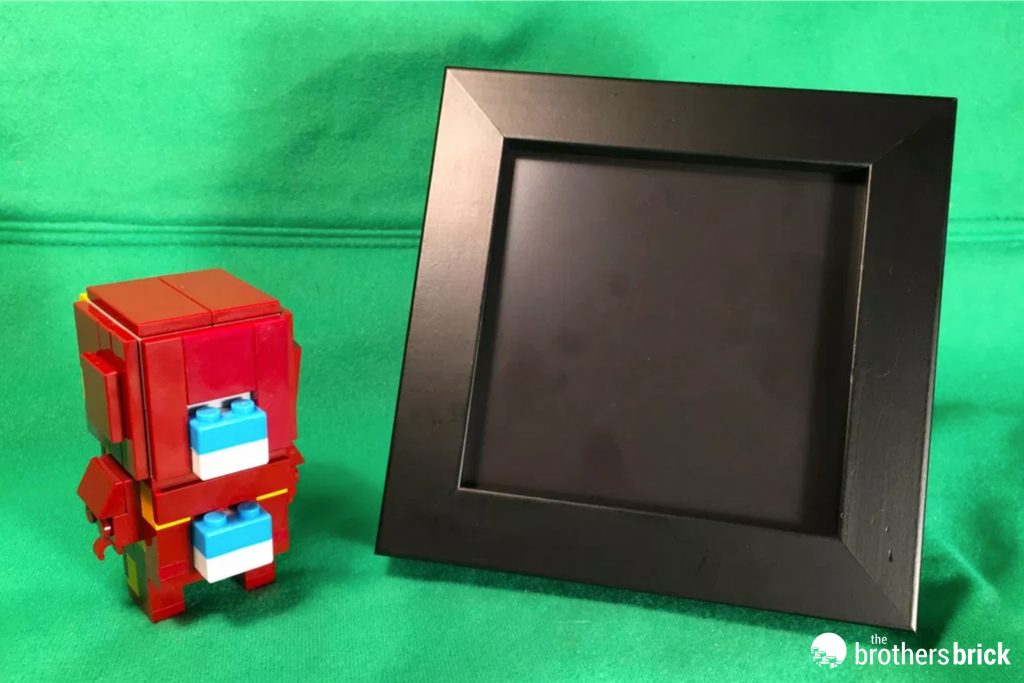 A single Mbriks brick cannot hold a BrickHeadz character, but generally speaking, two of these little magnetic bricks work just fine. It would be tough to hide the third Mbriks brick in the model because if they are placed too close together, they try to stick to each other and not the intended surface. 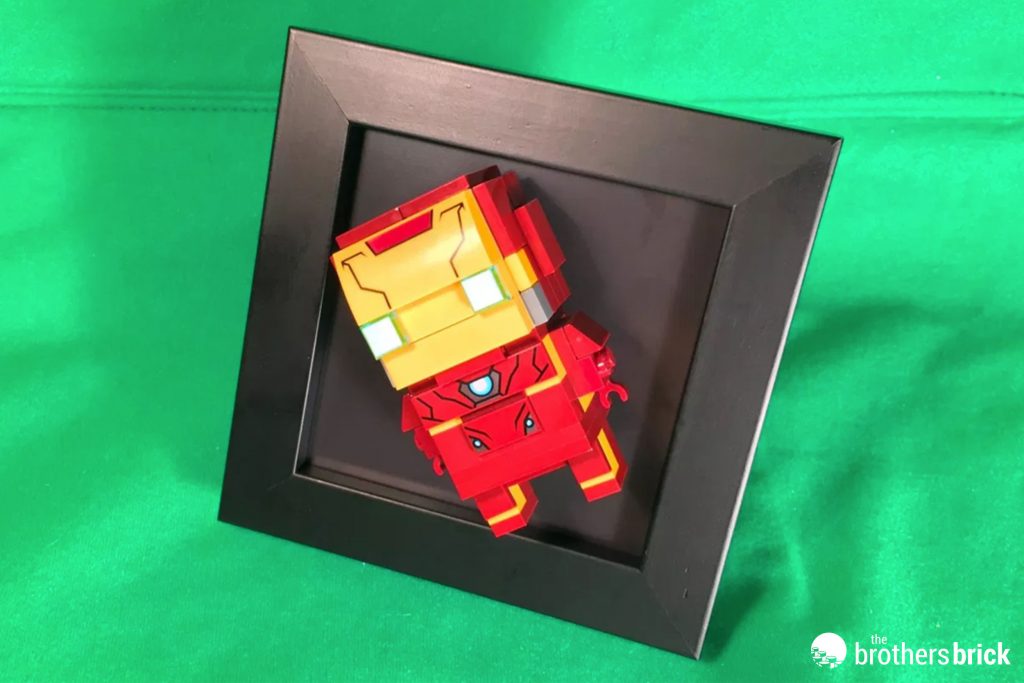 The frames provided with the bricks generally tended to provide the best magnetic connection. With refrigerators, however, your mileage may vary. It would be hard to tell how it would work on your particular refrigerator. However, the connections seemed to be fairly strong for us. It wasn’t perfect, because it seems that finding the perfect, balanced placement for the Mbriks on the model was important. 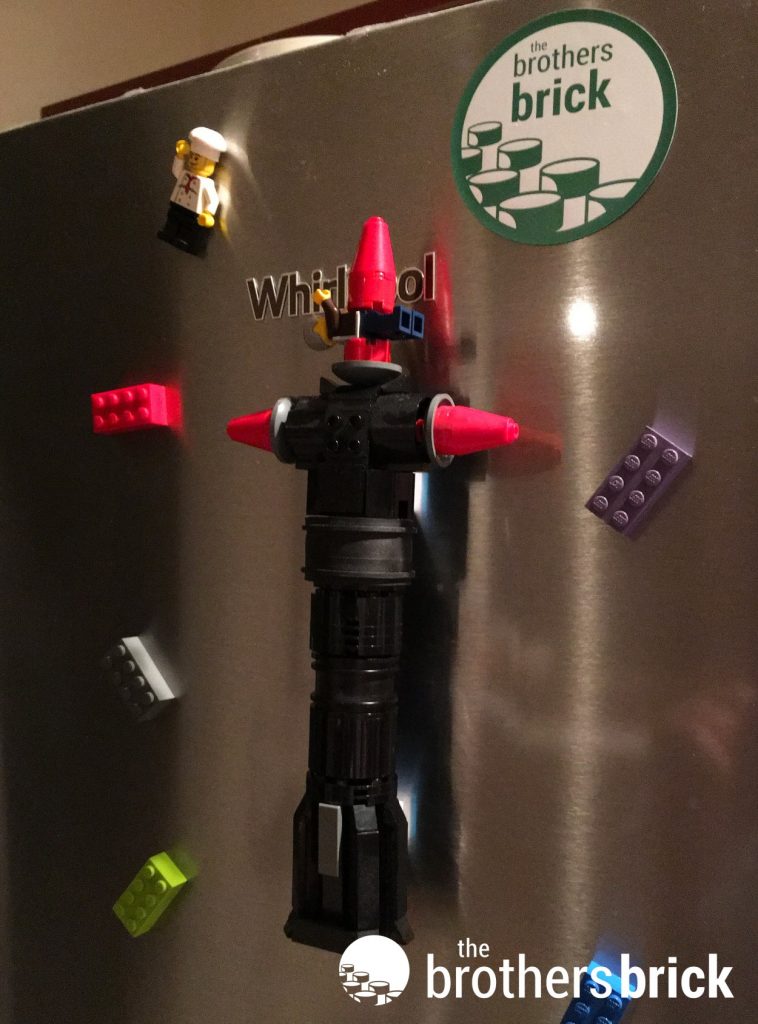 In our unscientific but numerous tests, we found the multi-directional intelligence of the Mbriks to be unpredictable – the strength of the magnetic attraction is dependent on the free-floating spherical magnet inside connecting in just the right direction. Both TBB reviewers found that models with Mbriks in them had a stronger or weaker adherence to metal surfaces depending on a shake of the Mbriks. More than one LEGO model was sacrificed for this review.

With a claim of being able to support 235 popular blocks with just 3 Mbriks in the video review on Kickstarter, we decided to give it a go with a different build. 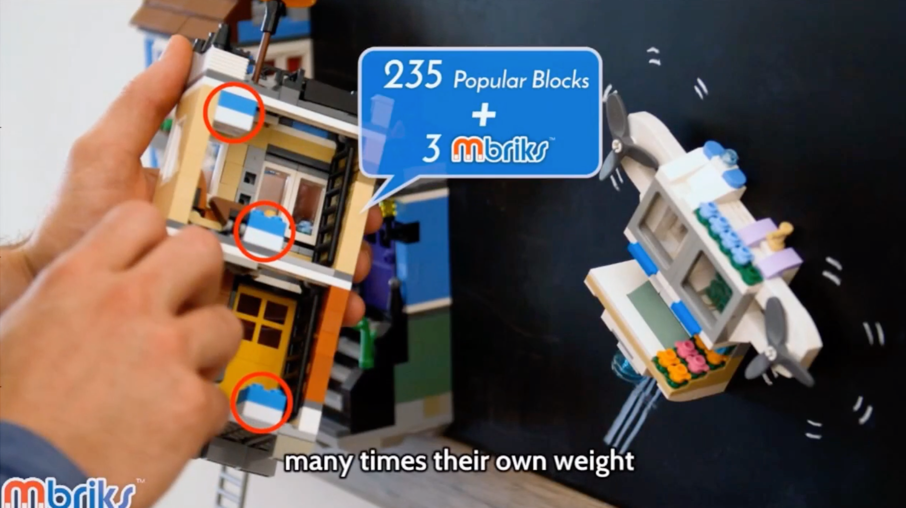 The test set below is the LEGO Snowspeeder from 1999. After removing the Minifigures and other side builds, the piece count on this is roughly 150-160 pieces in case we had some not so regular sized LEGO bricks. We thought this was a fair amount to test the three magnetic bricks as demonstrated in the Kickstarter campaign video. The results are shown in the video below.

While the three bricks did hold up the Snowspeeder as claimed, the placement of the build is somewhat tricky — you do have to be wary of the surface area that it is being placed on. Different surfaces (especially with refrigerators) will surely vary from manufacturer to manufacturer. So as a word of caution, be careful during the placement of your build.

We spoke with creator Evan who assured us that magnetic connection issues we found in our review copies were Version 1 of the Mbriks product line and were already being addressed in the newer production molds which will allow the magnet within the Mbriks to better sit within the internal cavities.

Inside the Mbriks magnetic bricks

The Mbriks’ patent-pending design allows a spherical magnet inside to connect to any magnet-friendly metal surface easily: The inner walls of the Mbriks are as thin as safely possible to allow this connection to take place. In the case of the topside of the Mbriks where the knobs would otherwise impede the “attach to any surface in any direction!” connection, a small fabric net recessed between said knobs allows the magnet to pop out slightly to get closer to the metal surface. 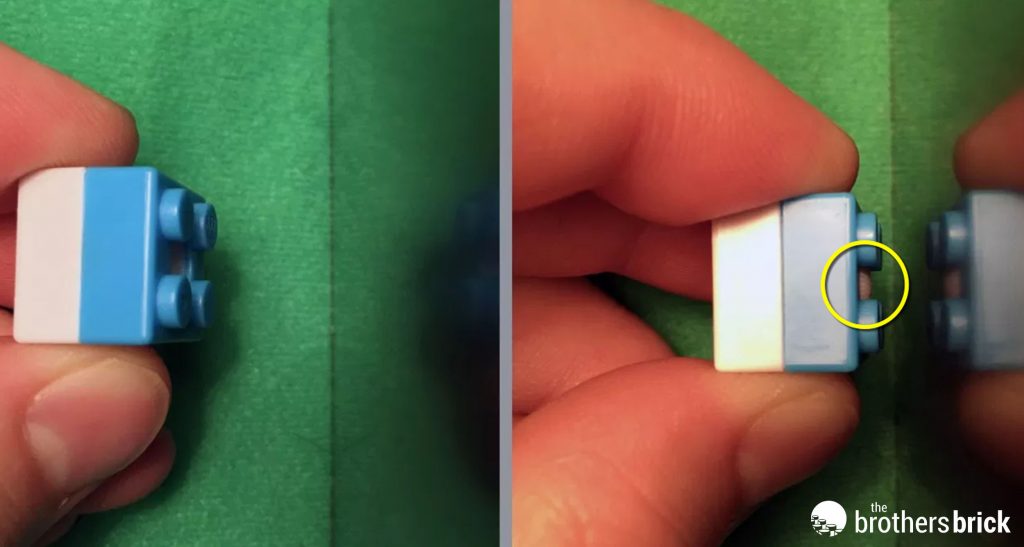 A simple deconstruction of an Mbriks brick shows that it is made up of five separate components: a top and bottom plastic outer shell, the aforementioned cloth netting, an inner plastic shell to hold the cloth in place, and the magnet itself. We were surprised at the small magnet size considering the size of the Mbriks brick (4 LEGO plates tall), which we asked Evan about. According to him, this was the most cost-friendly but just-strong-enough magnet they could include in Mbriks while retaining the foundational multi-directional selling point.

The complexity of each individual Mbriks brick may encourage anyone who experienced sticker shock on the Kickstarter page, since the production of this unique design is by necessity more technically demanding than a typical 2×2 LEGO brick but must meet all the same clutch tolerances. And if you’re curious about brick-on-brick clutch, it’s important to note that these have a decent clutch, but certainly not as good as an official LEGO brick. The studs on top have seemed to have better clutch than the underside.

We also asked Evan about two obvious visual features of the Mbriks during our first impressions with the pieces. First, the two-toned color choice of the Mbriks, which he confirmed was a conscious decision to help them stand out from the rest of your LEGO collection. Other color options are being considered for future runs.

Second, the height of the Mbriks is 4 LEGO plates tall. The reason for this was to provide the magnet enough room to travel to the parts of the brick it needs to reach to ensure the strongest connection, and it actually provides better stability when the brick is oriented knobs-up against a surface. Below is a design consideration supplied by Evan on the decision for the height of the Mbriks. 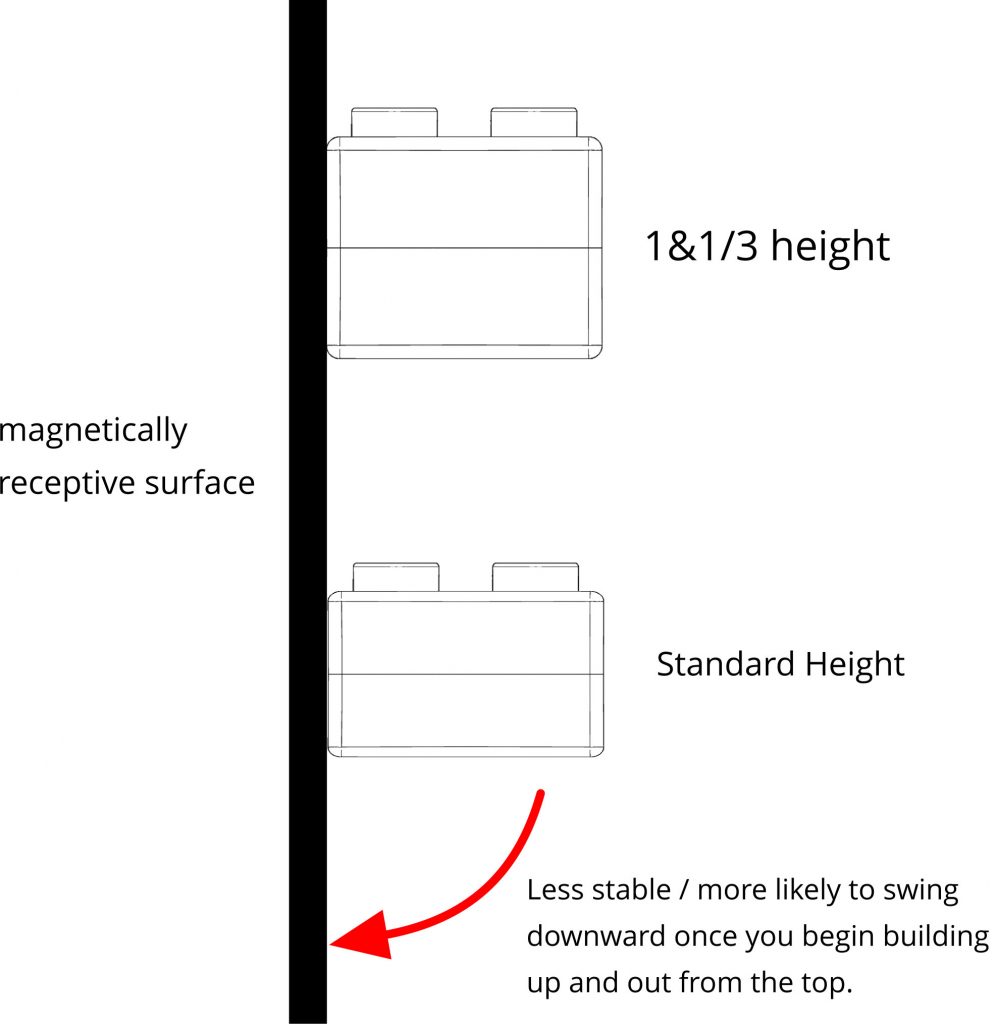 Overall, we still see a lot of promise and fun applications for the versatile Mbriks for LEGO fans, particularly as a way to liven up stuffy boardroom whiteboards, classrooms, and display spaces in your LEGO rooms. With the inconsistent magnetic strength addressed in the latest production runs, we’re more confident this product will be attractive for many fans. 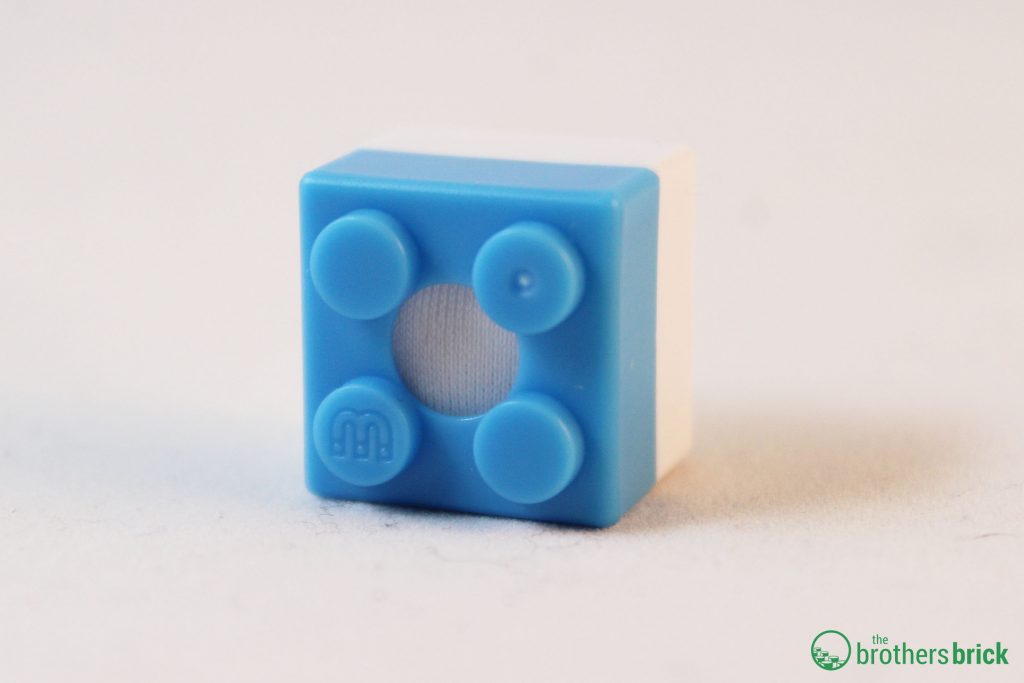 The Mbriks campaign is in the final hours on Kickstarter – head on over if you want to help support this product and get it over the finish line. The basic configuration comes in a 6-pack for USD $12 (excluding shipping).

Evan Grove, the designer, and creator of Mbriks sent us an early copy of this for review. Providing TBB with products for review guarantees neither coverage nor positive reviews.