Back in the 1980s and 1990s, Sierra was one of the biggest names in PC gaming, and high-quality adventure games were one of their specialties. One of their most beloved franchises was the Quest for Glory series, developed by Lori Ann and Corey Cole. Of the five games in the series, Letranger Absurde chose to recreate the opening scene of Quest for Glory I: So You Want to be a Hero. As the hero enters the picturesque town of Spielberg for the first time, he is greeted by Sheriff Schultz Meistersson and his massive right-hand-man, Otto Von Goon. Going by the colors used, Letranger appears to have based his representation on the VGA remake. He makes a great use of various angles to form the buildings in front of the town square, and forced perspective is cleverly used to suggest there is another area to explore. The characters are instantly recognizable, including a brick-built version of Otto pulling off a yo-yo trick like he often does in the game. 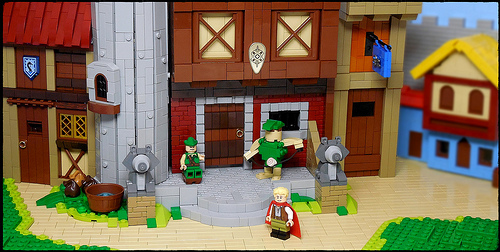 3 comments on “Bricks for Glory I: so you want to build a hero”