Enchantments, potions and magic! What else would one need? César Soares sure knows what is important in life – who cares about all that pointless real stuff, right? Joking aside, this is a pretty impressive creation. The builder says he has wanted to build in this scale for quite some time, and I can totally agree. Minifig utensils and the thicknesses of some bricks are often out of proportion with the minifigs they are made for, and that often looks very cartoony. This is not a bad thing on its own, but some times, it is nice to see more realistic Miniland scale creations like this one. 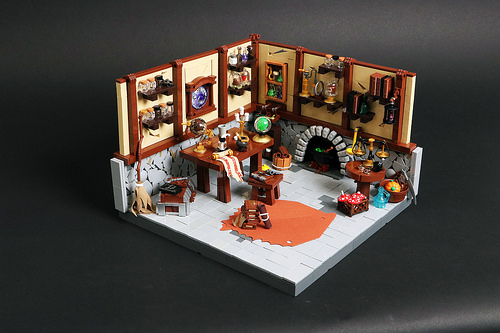 I have said that this creation is impressive, and just being built in Miniland scale is obviously not enough to achieve that. The scene is filled with unique part usage, most notably cloth pieces. Just look at the broom and the unrolled scroll! And still there is more to see, like legs of the chair and table that are tilted off right angles, clever use of the log minifig costume under the table on the right and the wall texture, which uses a technique most often seen as floor, due to how unstable it would be when set upright. I wonder what kind of magic César used to keep it in place!