Watching Top Gun is like eating a Philadelphia cheesesteak with cheez whiz. Some of the ingredients are a bit dodgy and there really is an awful lot of stringy cheese, but it tastes oh so good. Why? Forget Tom Cruise—the undisputed star of the movie is the Grumman F-14 Tomcat. However, instead Lego Admiral chose to build one of the villains, called the MiG-28, and that’s cool in my book. 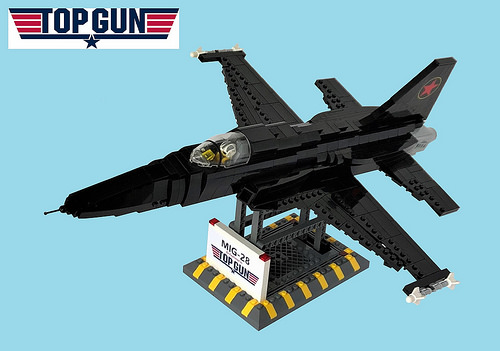 The MiG-28s in Top Gun weren’t really Russian, of course, because they never made a MiG-28. In reality, the planes on-screen were F-5 Tigers, which are normally used by the US Navy as adversaries in air-to-air combat training. However, the jets certainly looked the part, as for the occasion they were painted in temporary color schemes with fictional national markings of some Communist country. This made them look even more sinister, as we all know that evil wears black. The LEGO model has a long shark-nose and an expertly rendered coke-bottle fuselage. Even more than thirty years later the MiG-28 still looks bad-ass.