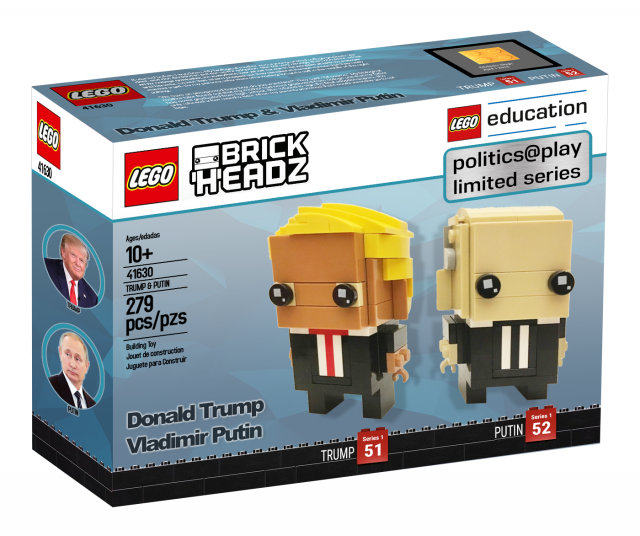 Originally rumored to be an upcoming Collectible Minifigure Series, the new BrickHeadz product line will feature prominent world leaders that embody the ideals of LEGO Education. While the first set featuring Trump and Putin will only be available in the United States and Russia, future world leader Politics@Play BrickHeadz will be exclusive to their respective countries.

Recreate your favorite world leaders with LEGO® bricks to learn about history!

LEGO® Education is proud to announce a new line of BrickHeadz® based on significant world leaders to help children engage in current events and increase cultural awareness. The Politics@Play® limited edition series will feature world leaders both past and present from countries across the globe, enhancing cultural representation throughout LEGO® products.

LEGO® Chief Marketing Officer Julia Goldin said, “BrickHeadz® is the most popular product line at LEGO®, topping both Star Wars® and Nexo Knights® in total combined sales last year alone. By extending that winning formula into LEGO® Education, we expect our Politics@Play® limited edition series will not only entertain and educate students, but become sought-after collectors items that will increase in value and fund a child’s college expenses as well.”

The first set in the series, 41603 LEGO® Education BrickHeadz® Trump & Putin, focuses on friendship and cross-border cooperation. Future sets will highlight leaders that imbue other education areas like STEM performance in relation to trade negotiations, empathy between opposing cultures, and investment in the performing arts.

Recreate Cold War tensions between world leaders and resolve them through negotiations right in your own home!

41603 LEGO® Education BrickHeadz® Trump & Putin will only be available in the capital cities of the United States and Russia for $29.99 and ₽1,799 respectively. Only 10,000 sets will be sold to create artificial scarcity in order to increase the collectability of each set. In anticipation of strong interest, early VIP access will be limited to the first 5 minutes of availability on May 1, 2018.