LEGO launched their Infinity War tie-in sets and the Hulkbuster at the beginning of the month, so we managed to snag a few freebies along with our 76105 Hulkbuster: Ultron Edition. One of the free gifts was a promotional polybag 30525 The Guardians Ship, which depicts a miniature version of the ship in 76107 Thanos: Ultimate Battle. Little is known about the Guardian Ship as it features in an upcoming movie, Marvel Studios’ Avengers: Infinity War that is released next month. 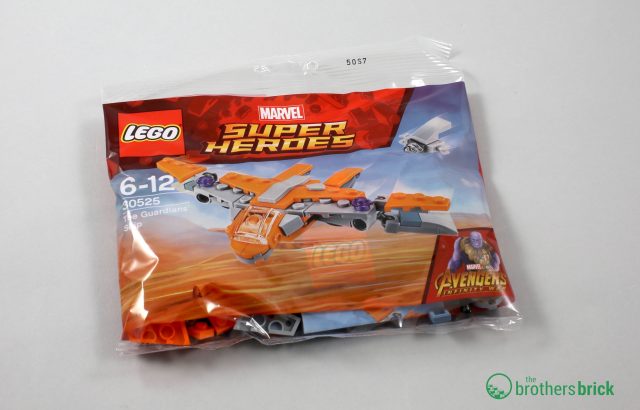 There are a nice selection of 69 parts in this poly, mainly a mix of Orange and Light Bluish Grey with a scattering of Sand Blue, Trans Purple and Dark Bluish Grey. Amazingly, there is a new part as Bracket 1 x 2 – 1 x 2 Inverted (Design ID 99780) appears in Orange for the first time. The Orange 1/4 Round Tiles (Design ID 25269) are only in three other sets (two of which are $200+) so they are a nice little bonus. 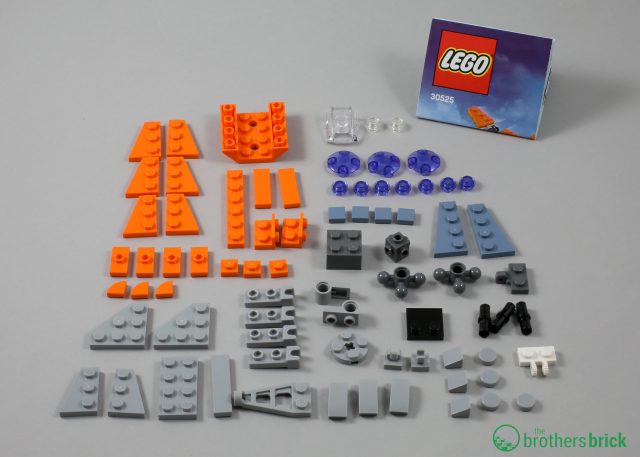 There are 18 steps to follow in the double-sided instruction leaflet and the first few steps create the central base of the ship. The layering of the wedge plates is an effective way to give the hull shape in a limited part count with the Trans. Purple boat studs and studs that represent the weapon systems of the larger ship. 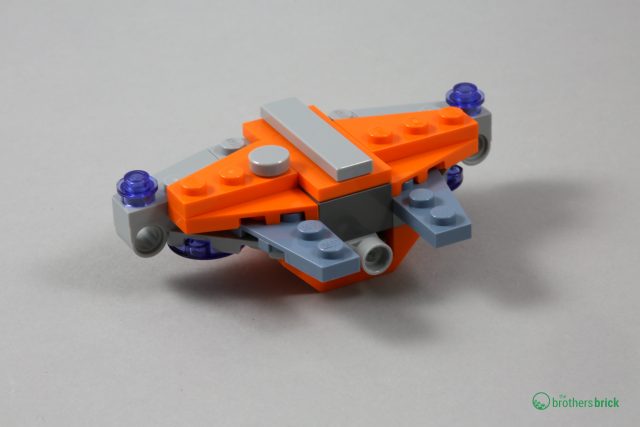 In the larger set, the cockpit opens to allow a space scooter to be launched. White this is not exactly replicable at such a small scale, the cockpit can clip on and off although I think this is design luck rather than a play function! 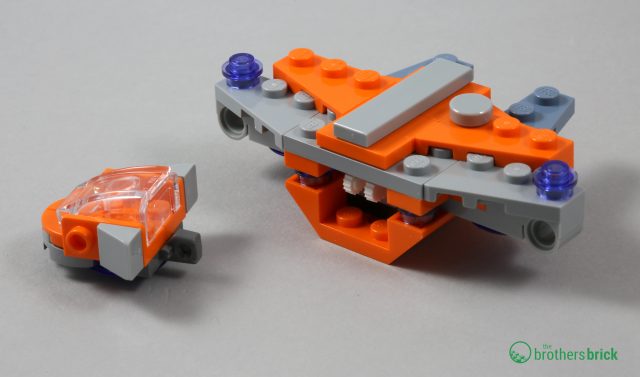 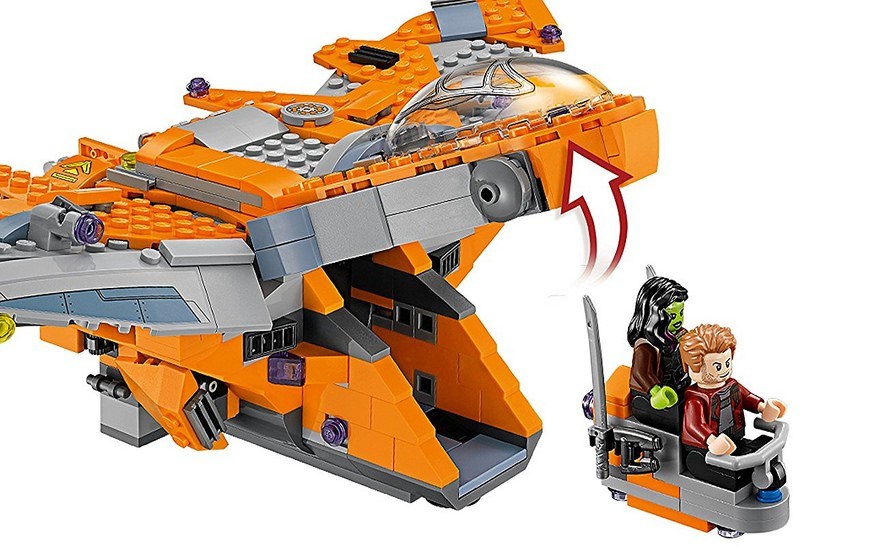 76102 Thor’s Weapon Quest features the escape pod that connects to the rear of the ship in  76107 Thanos: Ultimate Battle.

A great detail in the microscale version is the detachable escape pod that captures the feel of the larger set remarkably well, even showing a little hint of Sand Blue. 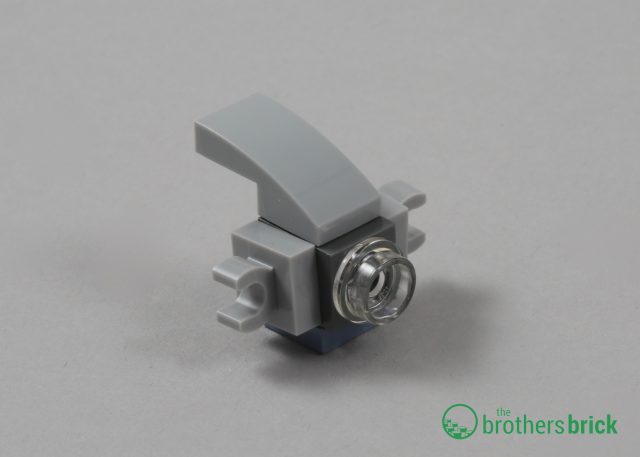 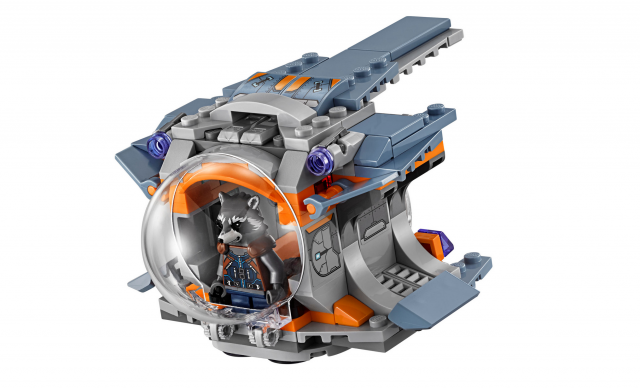 A simple connection to the rear of the ship means that the escape pod can be clicked on and off as a mini play feature. 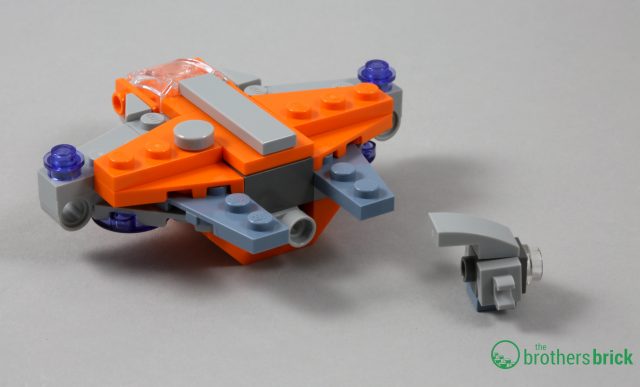 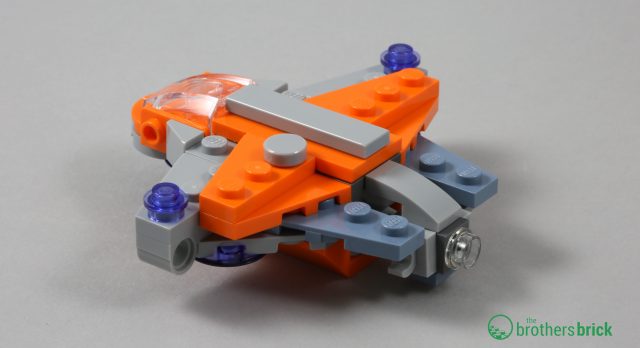 The completed ship is just over 5 inches in wingspan and has pivoting upper and lower wings that add a touch of play along with the removable rear escape pod. 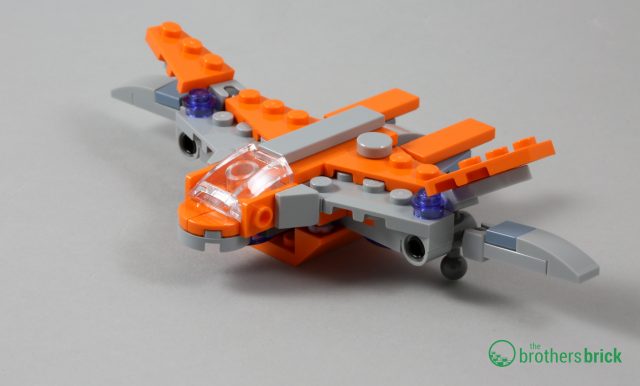 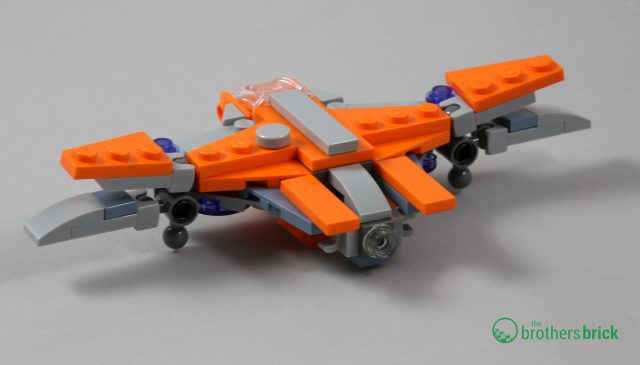 It’s always nice to have a few spares included, especially when it includes an Orange 1/4 Round Tile and a few Trans. Purple studs. 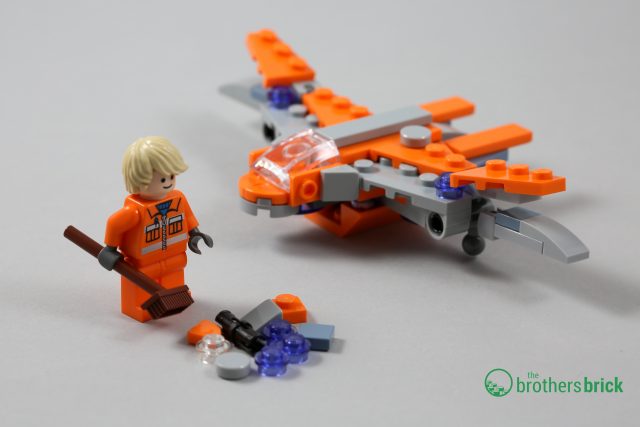 Overall for a free promotional poly bag, this is a great little set. It’s a fun build and the colours and shaping seem to match the larger version of the ship, albeit we have yet to see the movie version.  There are some nice parts, including one new part – two Orange inverted brackets and they  are exclusive to this set at present. Finally, there are some play features to help its swoosh-ability and an escape pod to detach and lose!