Every city needs fuel to run, and prior to 1992, real-life oil companies like Shell, Esso, and Exxon provided the energy to keep brick-built LEGO cities running. Then, a new competitor entered the market — a Danish oil company that went by the name Octan. Soon, all the other players couldn’t keep up with Octan and that led to the dominance of a single supplier monopolizing the brick fuel market. Octan were not satisfied with just the ABS market, and it seems like the fictional gas company grew into a real-life company supplying gasoline to real-world vehicles… (HOLD ON RIGHT THERE!) Yes, you read that right… How did a fictional company become real? 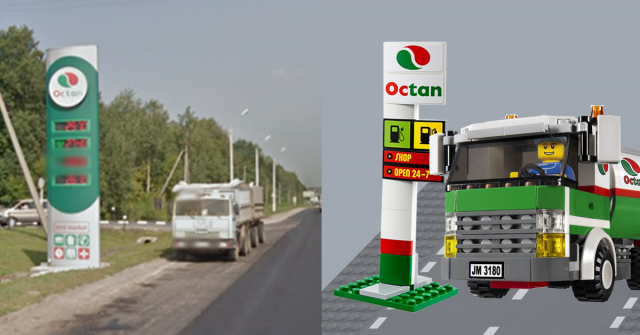 Well, we’re not going to give you false hopes that we know exactly how a fictional oil brand came to exist in real life, but we just wanted to share a mysterious incident that popped up on the web. A screen capture appearing to show an Octan-branded gas station in the real world went viral within the LEGO fan community recently, and we decided to find out what we could. We may not have all the answers, at least for now, but we do hope that someone will step forward to give us some background and context.

The re-surfacing of an old find

The Octan find caught wind amongst the private chats of the LEGO Ambassador Network Forum, and then landed on this Reddit thread posted by user TheBrickFan which referenced the YouTube video linked below. 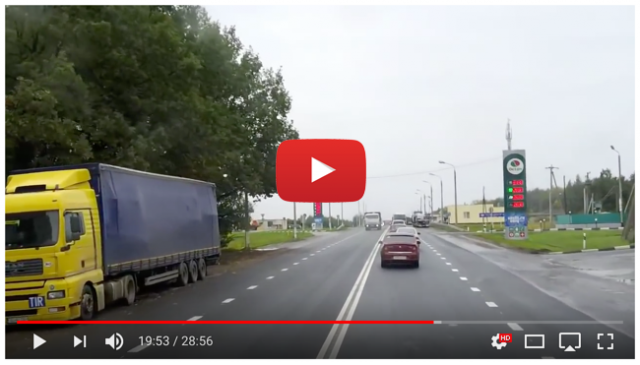 The search on Google Street View

With a bit of brute force, memorising the Russian alphabet and some key words, I plotted a potential path with signboards from the YouTube video and spent well over 2 hours ‘driving’ around the virtual highways and roads of Russia to track this down on Google Street View.

While browsing through the YouTube Video, I spotted a sign that a camera recorded of the town of Змиёвка, 37km (23 miles) away. With A LOT of luck, after an hour, I found the same town on Google Street View, with a sign 17km (10 miles) away. I knew it had to be in the same vicinity.

My drive time on the MacBook trackpad was finally rewarded much later with a few wrong turns. The effort was not wasted, as you can now take a “street view” look at the gas station (aka petrol kiosks). Drive right in here for your own virtual tour. 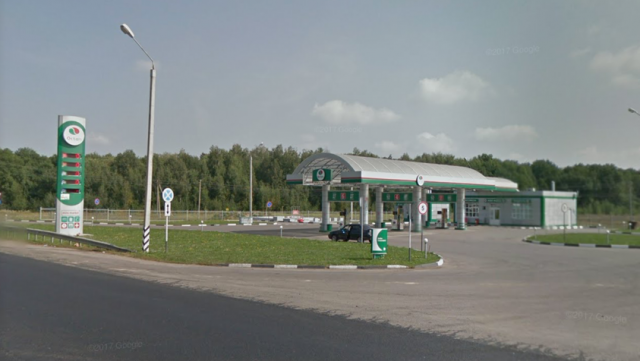 What you will see is not one but two Octan stations across the road from each other to cater to the bi-directional traffic on this somewhat low-traffic highway.

I still think the best part about all of this is how a fictional LEGO oil company somehow became a real-life oil company. We decided to ask our very own local TBB correspondent and Assistant Editor, Alexander, who is based in Moscow.

Alexander tells us that the real life Octan gas station had been spotted well over 6 years ago. It’s a single cluster of gas stations in a rural area about 300 km (180 miles) from Moscow. It’s likely a private business that buys gas from a larger gas company. There’s no presence of this company online to search or contact anyone for any further information, so it’s more like they were looking for design, hired some free-lancer who just Googled and found this existing logo design.

We could make the logical assumption that for business reasons (including some bad PR being associated with real-world oil companies), it was probably better for LEGO to establish a homegrown, fictional brand for its LEGO City filling stations versus one that Billund probably had to pay royalty fees to. Thus the creation of a fictional company called Octan. Because it only existed in the brick world, LEGO was free to create its own branding and to have free reign over how it could possibly be used in their various other play themes. It did pay off well as Octan became the evil corporation in the 2014 hit movie, The LEGO Movie.

The LEGO Movie, 2014. President Business giving a company speech over the air

The LEGO Movie, 2014. President Business in a corporate presentation

The LEGO Movie, 2014. Emmet’s plan to take down the evil empire

The Octan branding seems to have taken a new life in the form of an FM radio station Rocktan! Will we see a real-life FM Rocktan radio station pop up soon?

Where does this leave us?

So, with a bit more sleuthing we do know from the Twitter-sphere that there are more than two gas stations out there. This one from @Professor Brickkeeper on Twitter seems to have found yet another station.

So it turns out there’s an actual unlicensed Octan gas station in Russia. pic.twitter.com/i0ClP1xsE2

I’d like to call out to other LEGO fan brothers and sisters out there, especially in our Russian community, to see if we can find all the gas stations out there on Google Street View. If you’re on the outskirts of Russia, perhaps you can talk to the person manning an Octan station, and find out more for us. Does someone know the designer? Who’s the owner? How and why did they choose Octan? Do they realise it’s a real (but fictional) LEGO-branded company? We do want to see how far our combined efforts can take us to uncovering the truth!

As for me, for now, at least I’d like to think we have a hardcore LEGO fan out there in Russia who decided that he or she was going to make their favourite LEGO City theme come to life, and they did so in the most amazing way.

Leave us a reply below on what your thoughts and ideas are about this interesting find!