Sometimes I wonder how characters in horror films manage to make the worst decisions. Then I played as far as I could get in the terrifying first-person perspective game Alien: Isolation, and it all makes sense. In the heat of the moment, good decisions are hard to come by, and you don’t always have as much information as you need. For example, the motion tracker, like most of the equipment found in the game, is true to the aesthetic of the Alien film franchise and while incredibly useful, has definite limitations. Nevertheless, it’s a great device, and I decided to replicate this tool with LEGO. 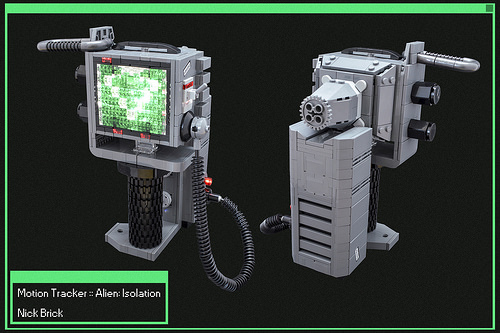 The screen and every light on the in-game model lights up on my LEGO replica. I also had the chance to use a technique I wanted to use in a prop replica for a while now; the coiled wire on the right side of the device was made with a flexible hose and numerous Technic worm gears.