Cassette players scream eighties so loudly that it seems kind of redundant to mark tapes as “80s mix”, but Jarekwally still decided to bring out the nostalgia even more. The builder was inspired by his father’s stories of how they used to pirate music nearly forty years ago with a radio and a tape deck. Cassette players are so iconic, you don’t even need to have 80s nostalgia to be inspired by them. 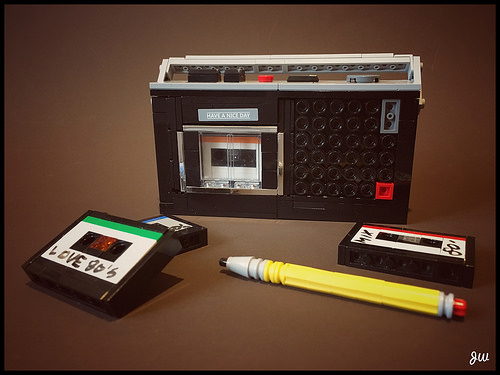 Jarekwally’s build is not the first time we’ve seen cassette players in LEGO, which kind of makes sense, as tapes are just blocky technical items with a limited variation of texture — which translates into bricks very well. What I love about this particular version is the use of chrome silver around the cassette slot and the underside of a plate as the speaker mesh. Simple indeed, but inspired.

Check out these other LEGO retro audio instruments: