If I had to pick one element of the LEGO world where building styles and expectations have changed the most in the last few years, I’d suggest landscaping has seen the biggest transformation in techniques and general quality. The level of detail, clever brickwork, and creativity on display in a good piece of landscaping now is amazing. EdgelessAbyss provides a great example — a scene where the rockwork is the absolute star of the show. The restrained use of colour, the way the tumbledown ruins blend into the surrounding earth, the solitary figure — the elements all comes together to make a bleak and beautiful fantasy scene. 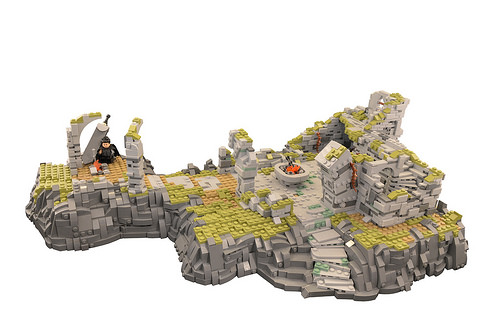 The builder says this was based on the style of the Dark Souls III and Berserk videogames. However, I’d love to see them use these techniques and styling on a version of Ahch-To, the Star Wars planet whose distinctive rocks and twisting stairs were filmed on the Irish island of Skellig Michael.

2 comments on “Bleak but beautiful”