Today we’re sitting down to talk to a rising Russian superstar builder, Timofey Tkachev. He has been in the online LEGO community for quite a few years, but the past two years have seen his spectacular creations gain increasing traction. Each of Timofey’s new builds improves upon those before it, but even with a sizable Flickr following and regular activity in the Russian LEGO User Group RFFL, there are many who haven’t yet discovered his work. Time to find out more about him! 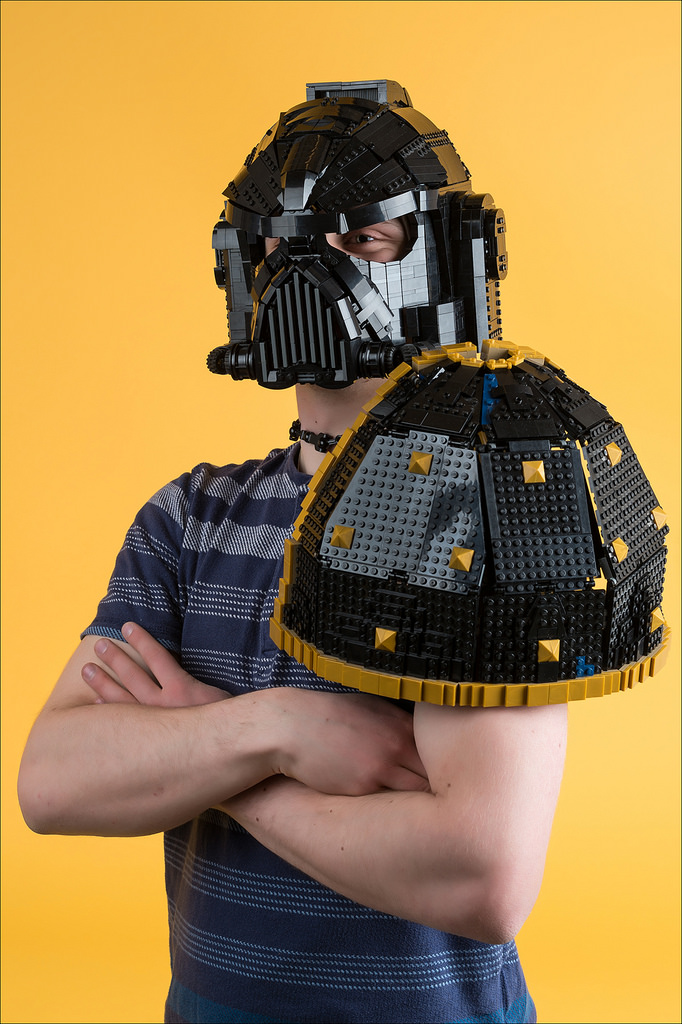 TBB: Welcome, Timofey! What can you tell us about your life and your general attitude towards LEGO building?

Timofey: Hi! First of all, I would like to thank you for inviting me to the interview. I am glad that my work has drawn interest. Let me introduce myself: my name is Timofey, I am 20 years old, raised and born in Moscow. By trade, I am a cook, confectionist, and food production technician. 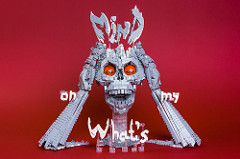 It is hard to say when I started building with LEGO — my parents bought me DUPLO, too. At one point I had a phase for a few years where I completely forgot about LEGO, but in 2012 returned to building, and now this is my main hobby. Over the years my collection has grown a lot, and now I have enough bricks to realize most of my ideas. But of course, there is always room to expand.

TBB: You say your collection has grown a lot lately (not surprising for a builder of your age range). Has this growth changed your attitude towards building? More importantly, I wonder if you have noticed a point at which your building speed had a problem keeping up with the size of your collection?

Timofey: Yes, of course. I would like to point out that the experience building from a small collection was a very beneficial period. I had to think of solutions and NPU — not to make my creation more interesting, but simply because of a lack of pieces. Now I can more freely choose decisions for creations, thus taking less care for wasting bricks, which obviously shows on the finished model.

I always lack time for building, especially because I, like I believe many do, have issues with procrastination, so many ideas wait for months, years. But luckily, my laziness is sometimes solved by competitions. For them, I sometimes manage to finish my build within a tight deadline, in a day or two. Building quickly is made possible first of all because of sorting, but more so because of my experience in working for the display in the LEGO museum in Moscow. There I had to build a lot, quickly and every day, without waiting for inspiration. Atmosphere that I need helps with building too — music or a good film, plus beer or sometimes coffee — and the process goes by itself.

TBB: You mentioned the Moscovian LEGO museum; can you tell us more about it? How did you get involved with it, and what is it like collaborating with them? 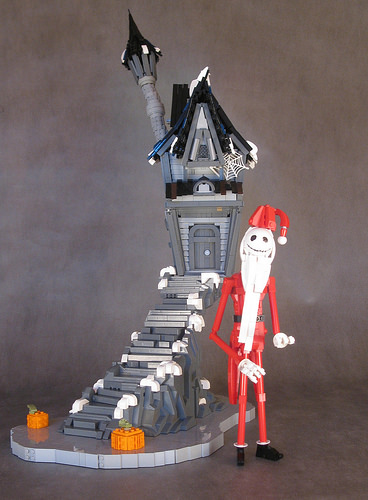 Timofey: There are not many LEGO-themed displays in Russia; recently, as the Moscovian LEGO museum opened, the only analog was in Sankt Peterburg. It is an honour to have collaborated with them. I was invited and contacted via our [Russian LUG] forum RFFL, and given the task to contribute to building an interactive display of a LEGO city on 21 square meters, which I have achieved in collaboration with two other builders. In general, the opening of the Moscovian LEGO museum turned out to be an important event for the Russian and Russian-speaking LEGO community and I am very happy to have had the chance to be a part of it. There are many warm memories associated with it.

TBB: Yes, the Russian LEGO scene really is spread out over a large geographic area. It is nice to see that Moscow has a LEGO museum.

Timofey: Yes, there is such a [distance] problem in our community – that is why coming together with many other fans offline can be hard. And the prizes for competitions, for instance, are almost always sent hundreds of kilometers away.

TBB: But, to get back to you now. Many of your creations from earlier this year were made for a competition on the Russian LUG forum. I have heard it went pretty well for you! If I am not mistaken, you have won the contest and still had time to build banners for most rounds. It is mind boggling where you find time and energy to build extra creations during a fast-paced contest like that. Contests aside, are you active in your LUG otherwise as well? 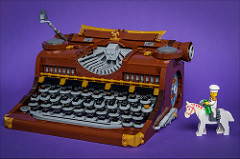 Timofey: Many of my recent builds were made for a contest on the Russian LEGO forum. The competition ended a few months ago and all prizes have been awarded (including mine for the first place!), but the contest remains an important experience. By the standards of our community it has attracted many contestants, and what is more important, they were all very talented! For instance, from every round at least one creation appeared on [The Brothers Brick]. Well, to attract and motivate participants, I have helped with the organization with banners for individual rounds, although not quite all of them — the fourth round’s banner was made by Федя Spacehopper, the person who founded the whole “Battle of the Builders” (Битвa строителей). 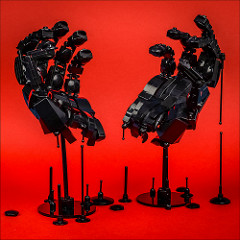 The community here is very friendly and we like to help each other. A good example are the photos on my Flickr photostream; they were all made by our LEGO ambassador, who is also the administrator of our forum. I am not very good at photography, so her help is always very welcome. This help makes me want to give something back, with whatever I can, from building initiative to help at events. Of course, I do not only build for contests, as there are always many ideas which I want to complete, but additional motivation helps. The latest builds were made for a display and celebration at the tenth anniversary of our forum. There I have had the chance to meet many fans coming from all corners of the country and some neighbouring ones too, and especially seeing their work in person.

TBB: The creations you have built for the contest are still some of my favourites from you, especially the blood fountain shaped as a girl. Could you tell a bit more about it? Where does the inspiration come from? Is there any particular details you would like people to pay more attention to? 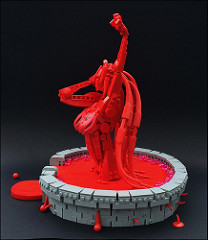 Timofey: This creation was built for the fifth round of the aforementioned contest; the theme was music. I like the group Bjork and their song Bachelorette. It’s one of those which made a really strong impression on me. Under this impression I have made my creation (in the last day before the deadline), trying to get as close to my associations to the music and words as I could. It seems to me the face turned out expressive, and blood on its own is symbolic — ambiguous and provocative. But I think in these times art has to be such. Maybe art is a strong word for my builds, but it is what I am striving for.

TBB: You should not be afraid to call any LEGO creation art, especially ones as excellent and expressive as yours! Speaking of your own creations, which one would you say is your favourite? Any one that you thought was really good that did not end up being popular? 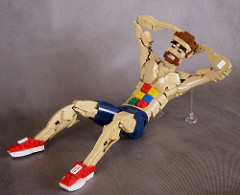 Timofey: It would be hard to choose, but in general I want it always to be my latest build — that would indicate progress. Sometimes I succeed at this, like I did during the contest. Some creations I think are characteristic for me: What’s on my mind, Руки (hands), Печатная машинка (typewriter) and Буддийский храм (Buddhist temple). Also ABS, I think I should mention — I think the play on words worked really well.

TBB: Indeed, you are a very progressive builder, and we enjoy watching your work push the boundaries. Do you have any plans on what to build next? Is there any special idea you really want to bring to light?

Timofey: Thank you! There are still many ideas; more than there is time for, sadly. Lately, I have been writing them down, and there are more than 40 on the list already. There is an idea I have had for a while that will just not leave me alone, a project for which I still do not have the resources: an apocalyptic scene in the style of Kurt Vonnegut’s Cat’s Cradle. Sadly I have not seen any illustrations of гибели мира by the group Лёд-девять not only in LEGO, but in general… It seems as a large project and I hope to some day tackle the idea. 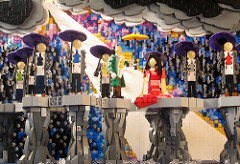 TBB: I hope you manage to build your dream creation. We can both agree, I am sure, that apocalyptic builds eat up bricks surprisingly quickly! ou have really given us a great insight into your history and progressive mentality, which I hope will spread onto more builders too. It was a pleasure talking to you.

You have really given us great insight into your history and progressive mentality, which I hope will spread to more builders as well. It was a pleasure talking to you.

Timofey: Thank you so much, I also had a very pleasant time! 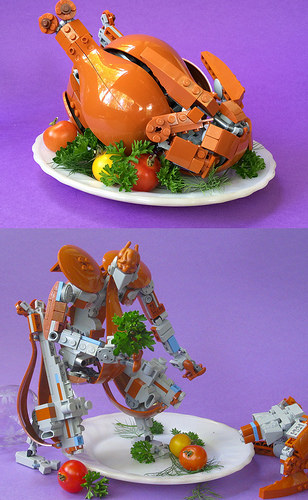