Ninjago is never complete without at least one dragon, and new The LEGO Ninjago Movie line is no exception. Today we’re face to face with 70612 Green Ninja Mech Dragon, available now for $49.99. The dragon has 544 pieces and comes with four minifigures. 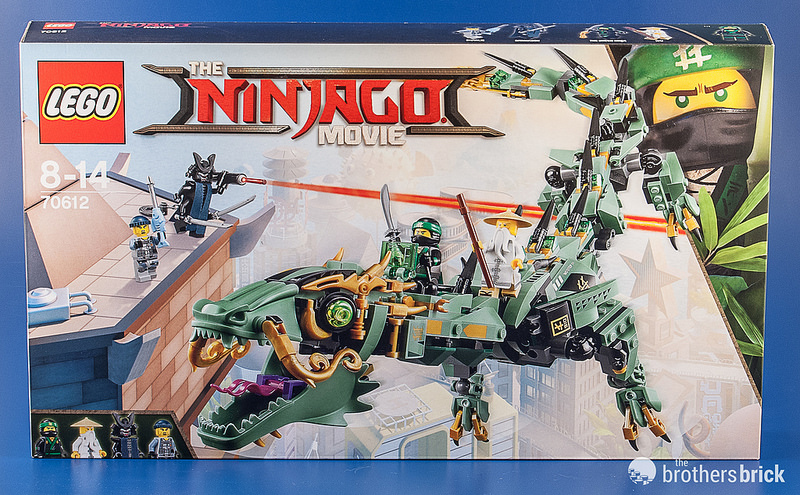 The box features the dragon prominently on the front and shows it in action on the back. The back of the box shows off the dragon’s articulation and play value, with a LEGO inspired (but not brick-built) movie setting background. 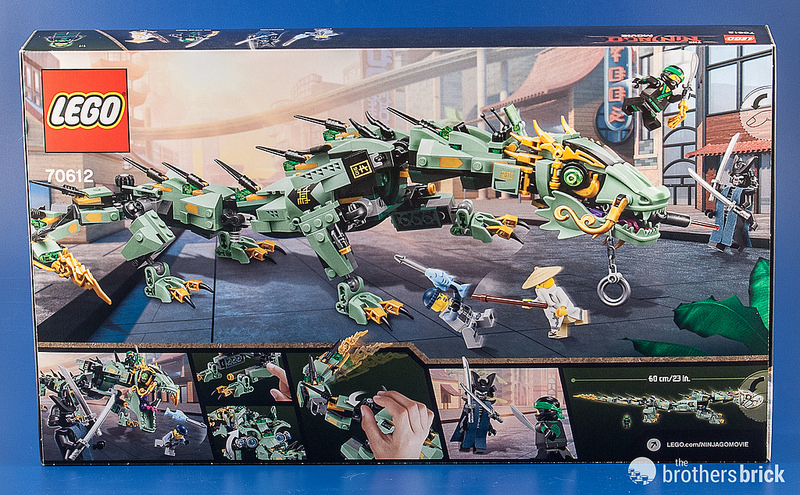 In the lower right corner, the box shows the dragon’s measurements: a full 23 inches long! Of the nearly two dozen dragons in the Ninjago line, this is the longest (though not the biggest going by part count).

The set comes with two instruction books (one large, one small) along with a small sticker sheet. 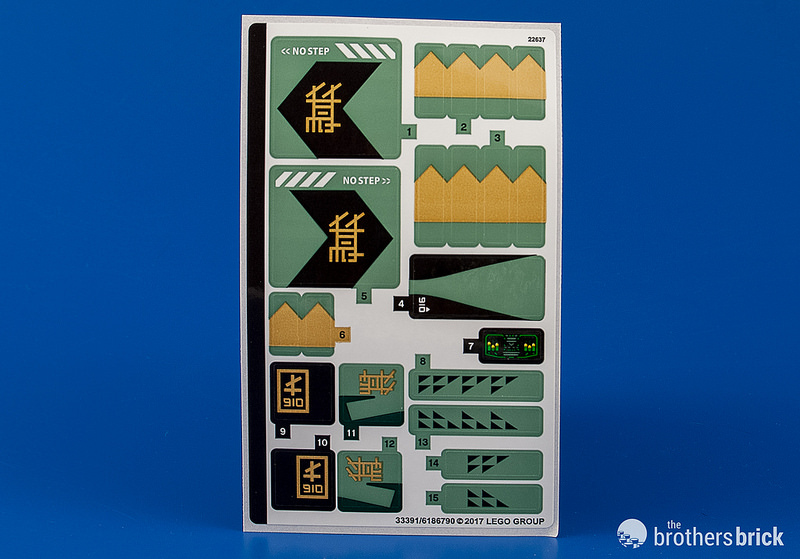 The Green Mech Dragon is a worthy addition to Ninjago’s dragon family, and arguably one of the better dragons that LEGO has released. The build begins the same way as most LEGO dragons, with the torso. From this first build, I expected the whole dragon to be bulky and thick, though this proved to not be the case. The legs have only two articulation points at the shoulder and wrist/ankles. The elbow joint is fixed at 90 degrees, which limits positioning. 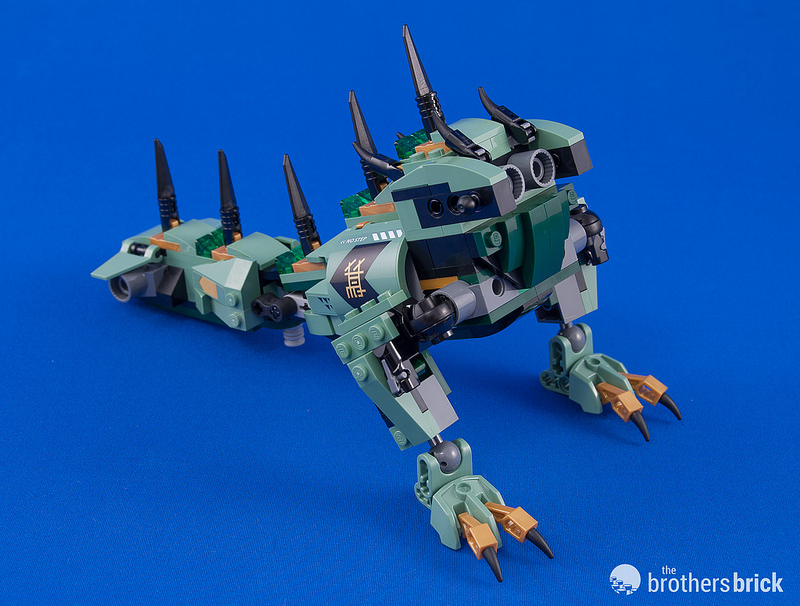 Of the entire dragon, the only truly “mechanized” portion is in the chest, right behind the front legs. This dragon is equipped with rocket boosters, located helpfully under flaps marked No Step. 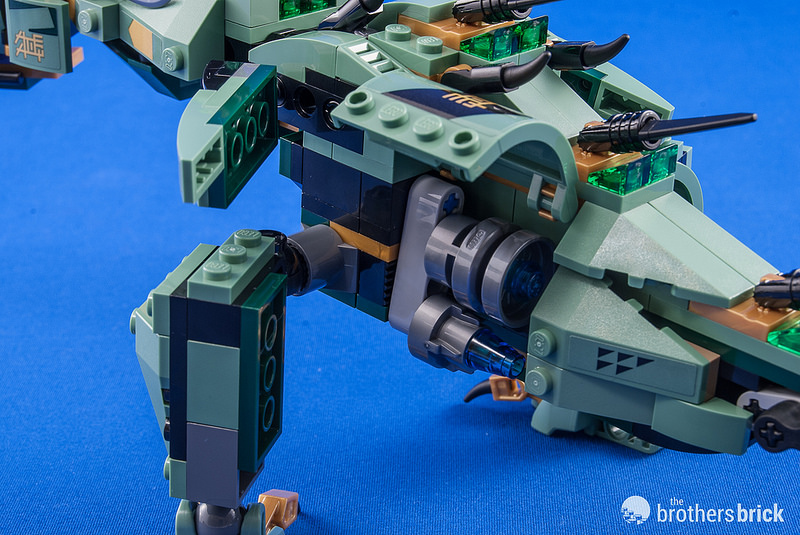 After completing the torso, the next addition is the long, serpentine body. The dragon’s waist is hinged using 2×2 coupling plates and a 4-long cross axle. There is a Technic rubber Damper 2m on each side of the joint to provide both flexibility and stability as you swoosh the dragon. 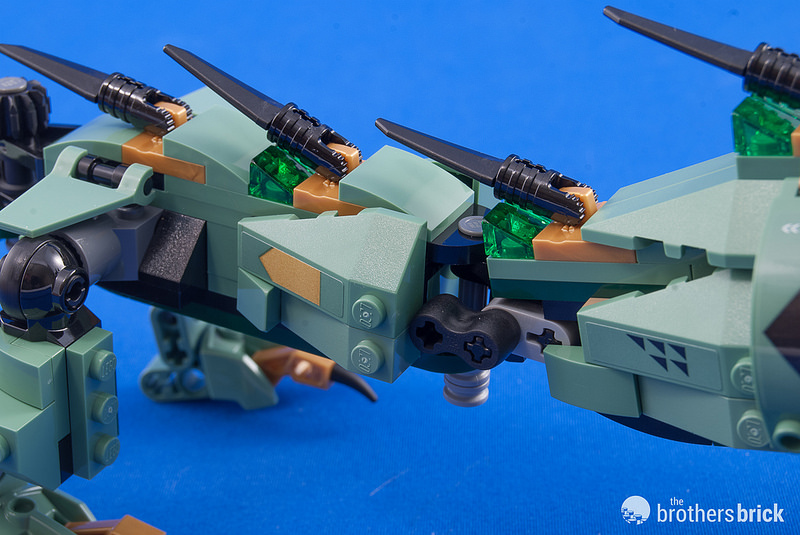 The tail is built just like the one in 2509 Earth Dragon Defense: spin the technic gear and the tail whips back and forth. There is very little friction in the tail joints, which does make it difficult to position, as the tail tends to naturally fall one way or the other. 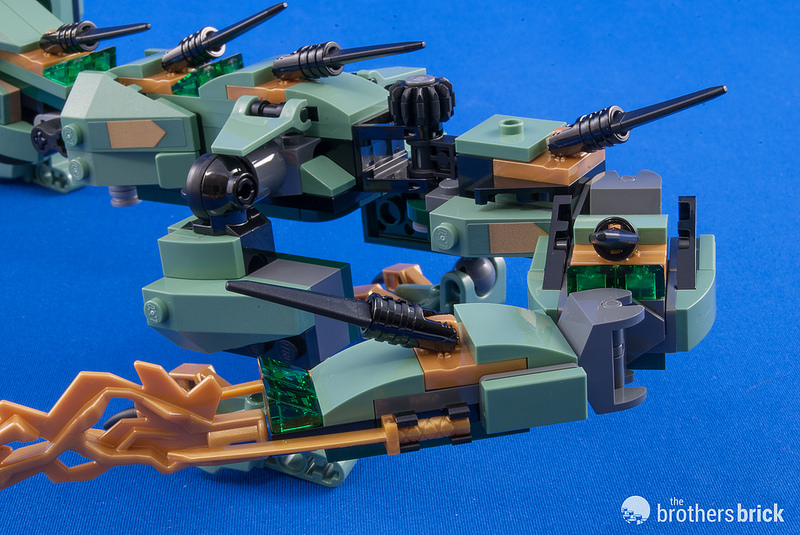 Moving up toward the head, the dragon has a thick neck to accommodate Lloyd’s cockpit. Here you will find the only printed piece in the entire set (except minifigure parts), the book cover in trans green, printed with a navigation display. 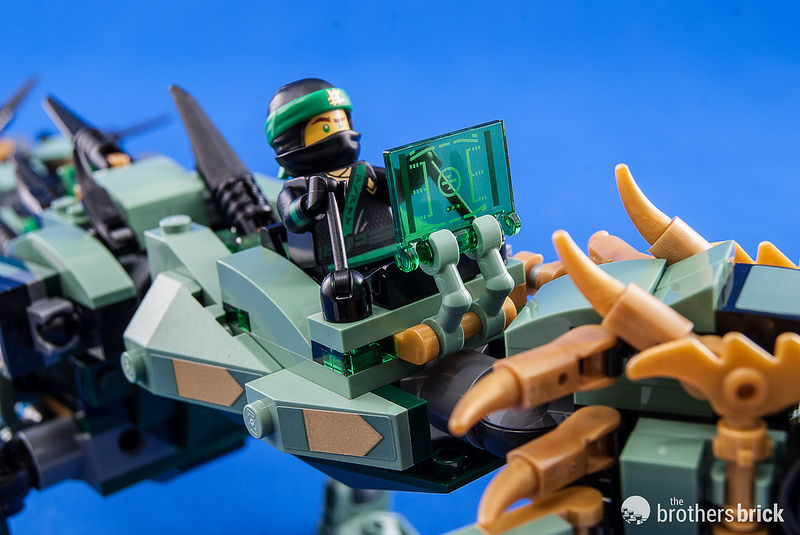 Of all the sticker applications I encounter in sets, I have two particular pet peeves: stickers on curved elements and stickers on tiny elements like 1×2 cheese slopes. This set has both types of sticker applications. I find these to be the most challenging to apply correctly. I would have loved to have the 1×2 black cheese slope printed, if nothing else. The particular design is highly useful for other builds, and would save me the frustration of putting in on slightly crooked, but sadly, LEGO rarely prints this element. 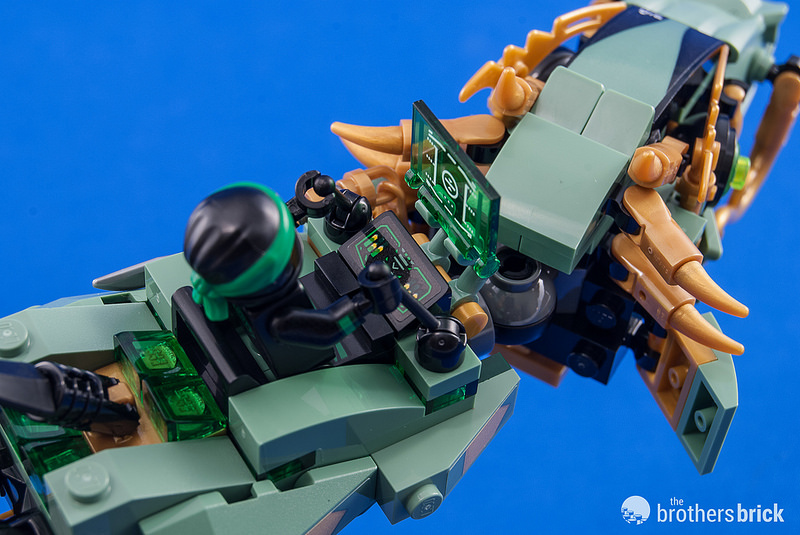 Helpfully, Lloyd’s cockpit has a place to store his fancy tasseled sword during flight. 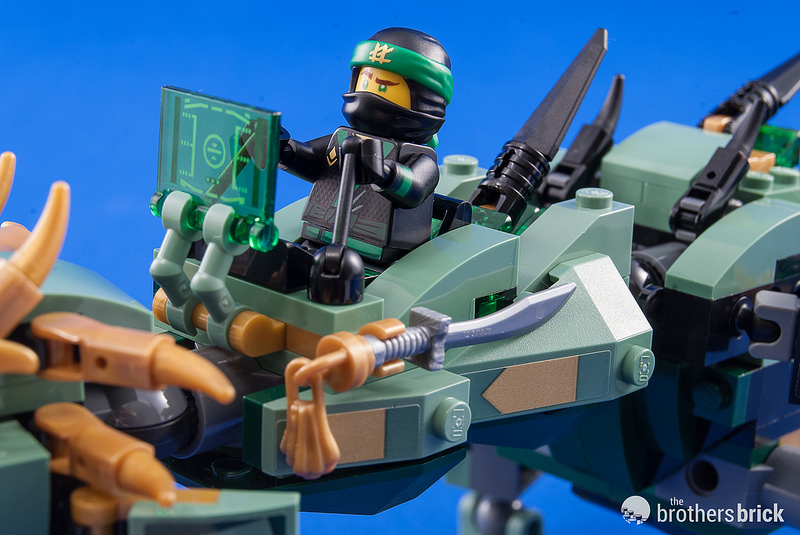 At last, the head. This dragon is fully decked out in gold, and the new filigree design element in gold works perfectly for his whiskers. The blades and bananas in warm gold give the dragon its distinctive eye shape. 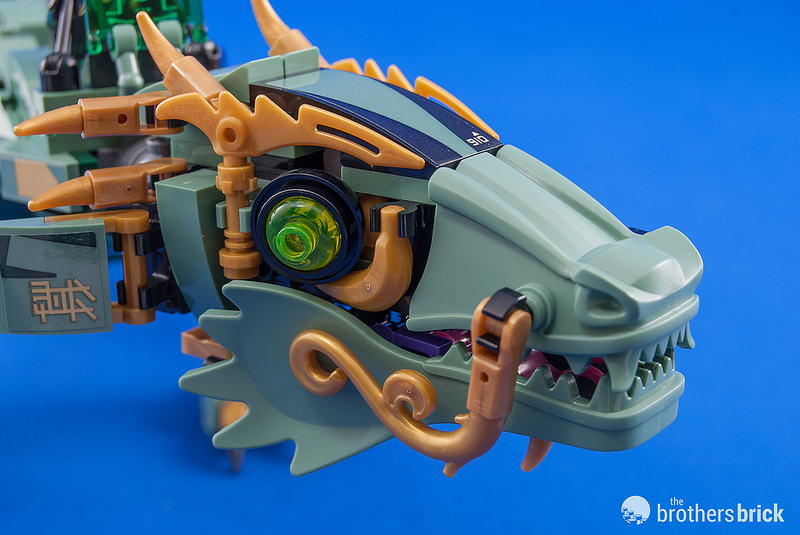 Inside the mouth, the tongue is very simple: a pink flag held in place with two purple 1×1 plates with clips and a 1×2 modified plate with handle. The jaw uses a click hinge for articulation. Compared to past Ninjago dragons, this is a far simpler approach to hinging the jaw, and it’s much better. The older dragons were often too bulky in the head and jaw. 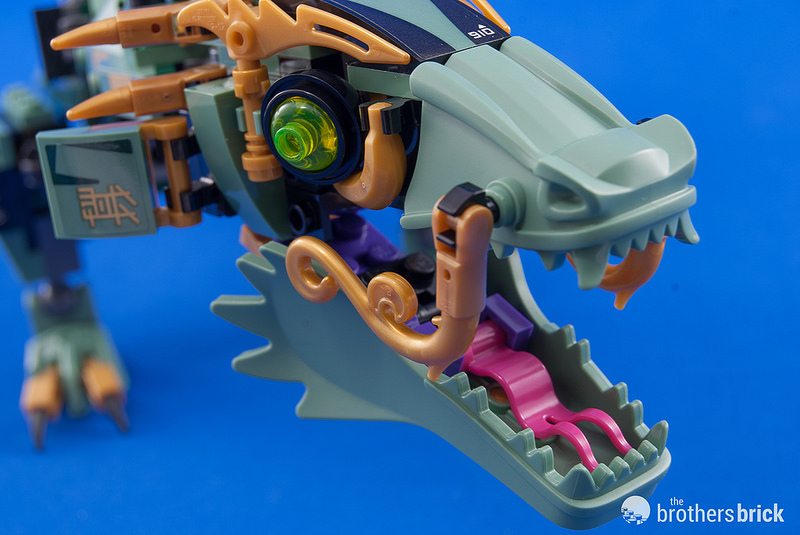 The eyes are fantastic, held in place using the subtle angles of a handle bar piece clipped securely into place. The eyes themselves are trans-yellow minifigure heads with an inverted 2×2 dome. This makes the eyes angle forward slightly, giving the dragon more personality. 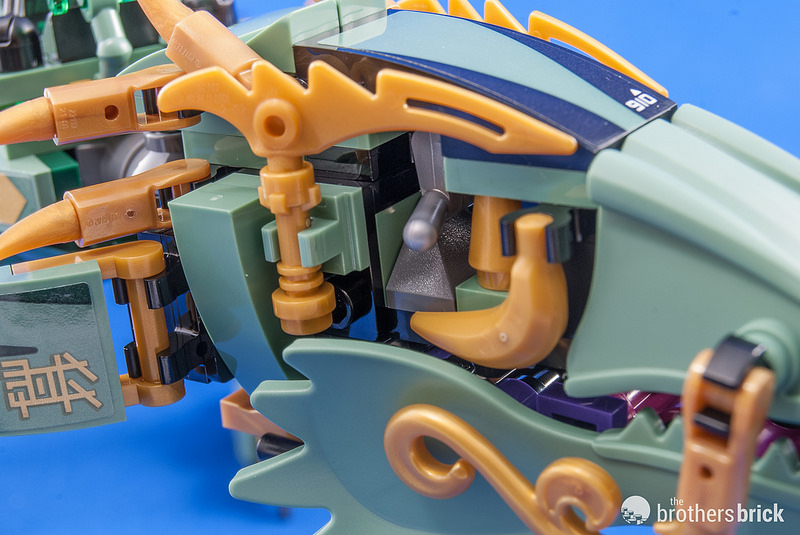 The upper part of the body and the neck are wide and stocky. The hind section is more uniform in length from midsection to tail and quite skinny. It makes the final model look unbalanced. 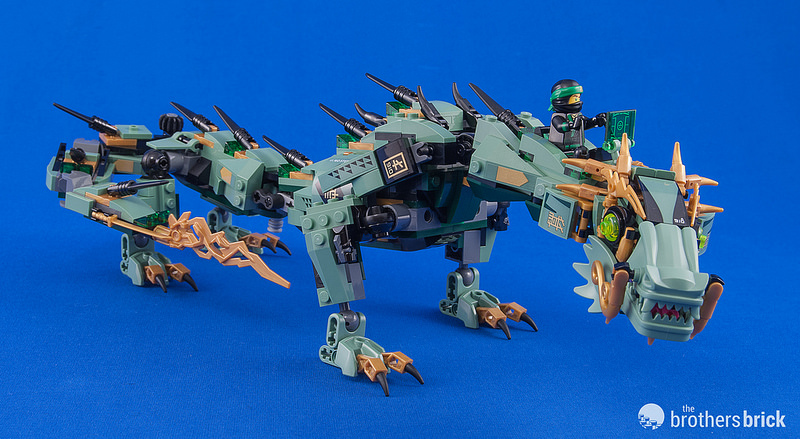 The Green Mech Dragon set is obviously significantly smaller and less spiky than its on-screen counterpart. The movie dragon has much more articulated limbs and also uses chrome gold elements, while the set dragon is stuck with the much less flashy warm gold.

Understandably, the big sets for this line were destined to be 70620 Ninjago City and 70618 Destiny’s Bounty. A set made to the scale of the film dragon would exceed the $50 price point by a significant amount…but man, that would have been awesome. 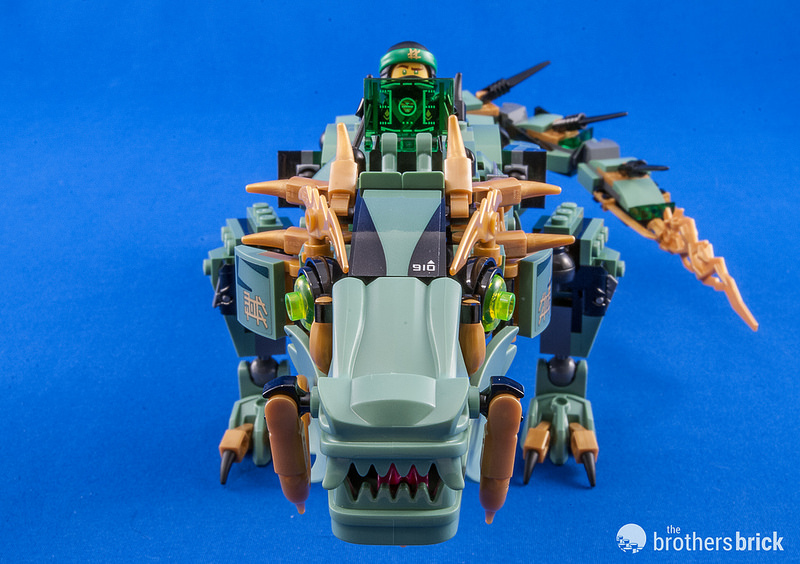 The dragon’s snout and lower jaw are new to this set. Previous Ninjago dragons used specially designed dragon heads and jaws, featuring a ball shooter inside the mouth. The plastic for these was the softer material used for some of the newer hairpieces and wings, while the new elements here are standard hard ABS plastic.

Some other dragons, like 70736 Attack of the Morrow Dragon, simply used a brick-built approach for the head, though these had varying degrees of success.

The combo approach for Green Mech Dragon works well. Part of the head is brick built, allowing for some excellent techniques, while still employing the new elements to achieve classic dragon shaping for the snout without being bulky. The jaw reminds me of an enlarged jaw from the 1990s classic dragon. 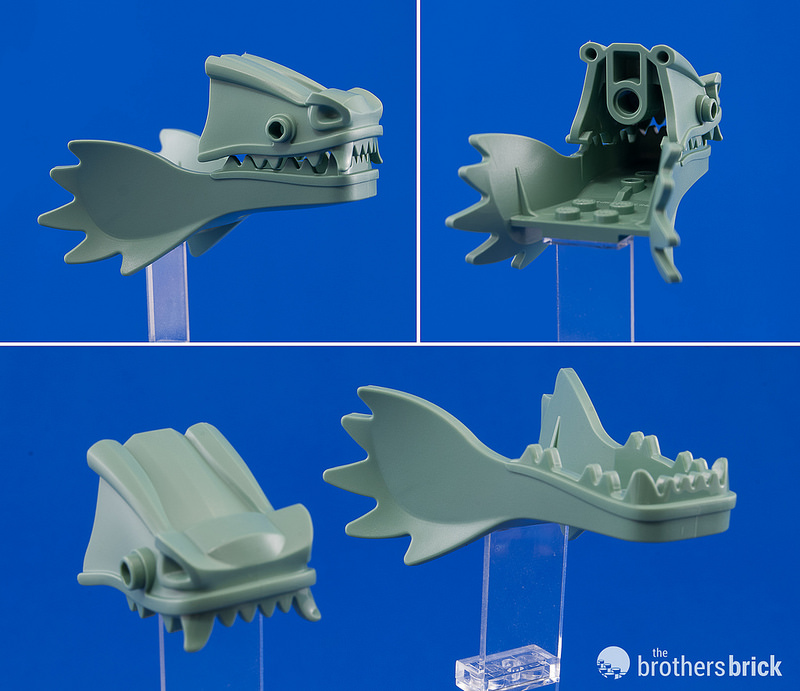 As mentioned previously, there is precisely one non-minifigure printed part: the trans-green book cover. The HUD design is generic enough to find uses in plenty of fan creations. 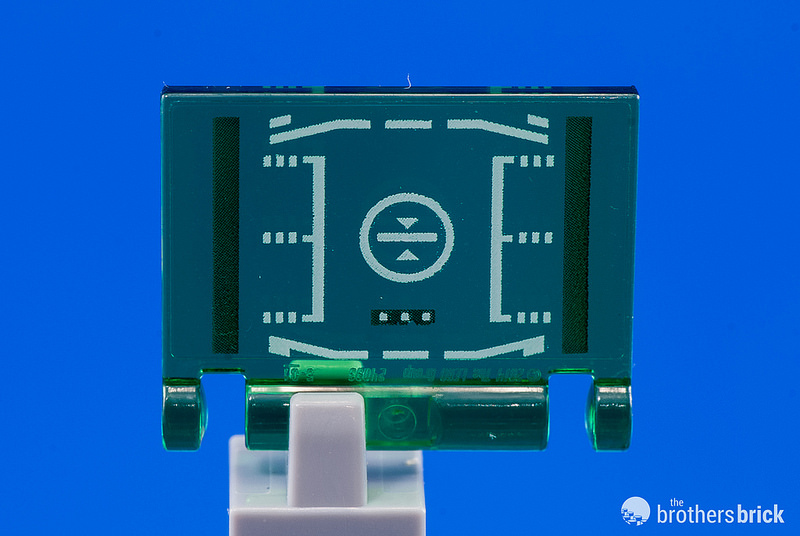 The set comes with Lloyd, his dad Garmadon, Master Wu, and a generic Shark Army figure. Lloyd gets equipped with a human-sized laser pointer (the same design that we saw in  70618 Destiny’s Bounty). Similarly, the minifigure is identical to the one found in 70617 Temple of the Ultimate Ultimate Weapon and 71019 Ninjago Movie Collectible Minifigures. 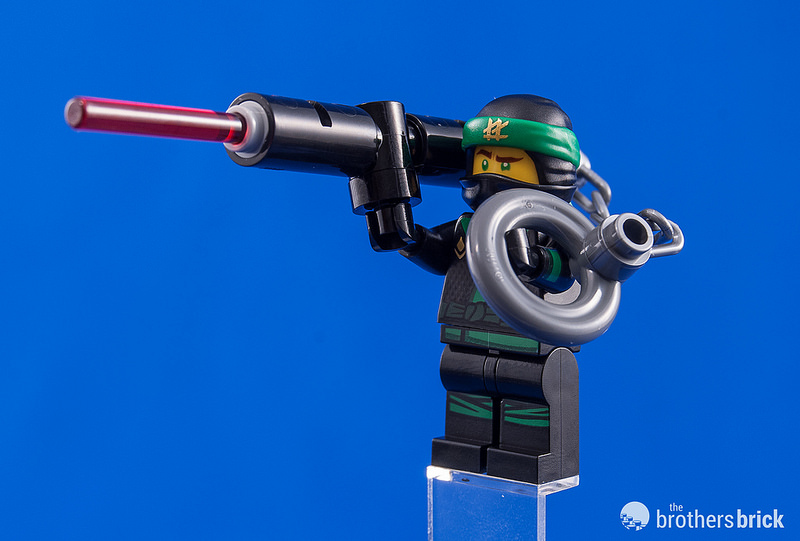 Generic Shark Man (aka Charlie) is…well…generic. It is the same as the minifigure in 70609 Manta Ray Bomber, which shares the torso and leg print with just about every other Shark Army minifigure in the series. Charlie has a blue hat. Garmadon is printed with armor, unlike his bare chest in 70617 Temple of the Ultimate Ultimate. He also features a long cloak.

Master Wu’s figureis nearly the same as the Collectible Minifigures, but lacks arm printing (and a box of Corn Flakes). 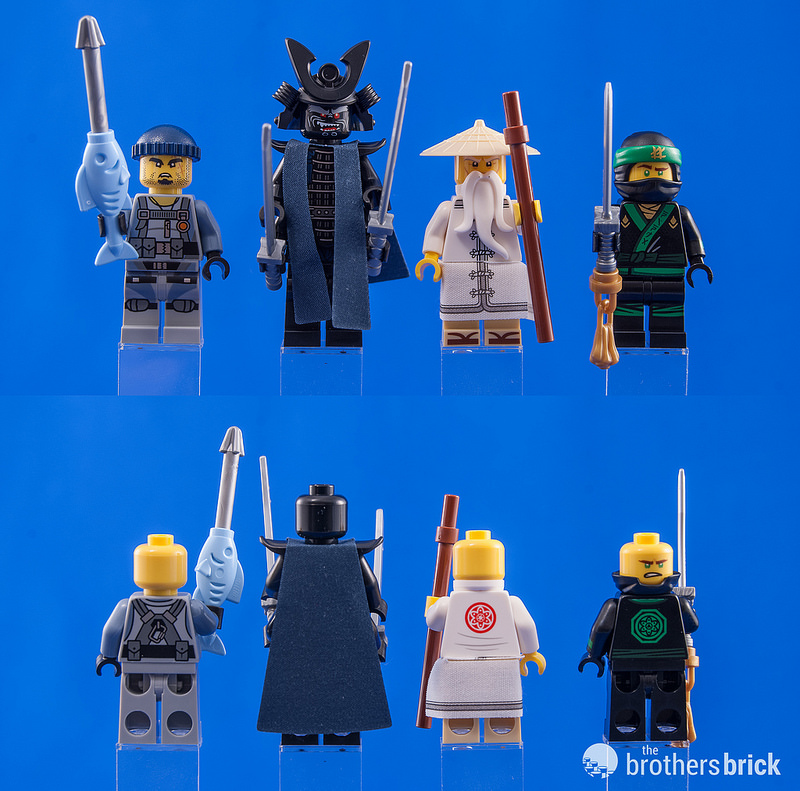 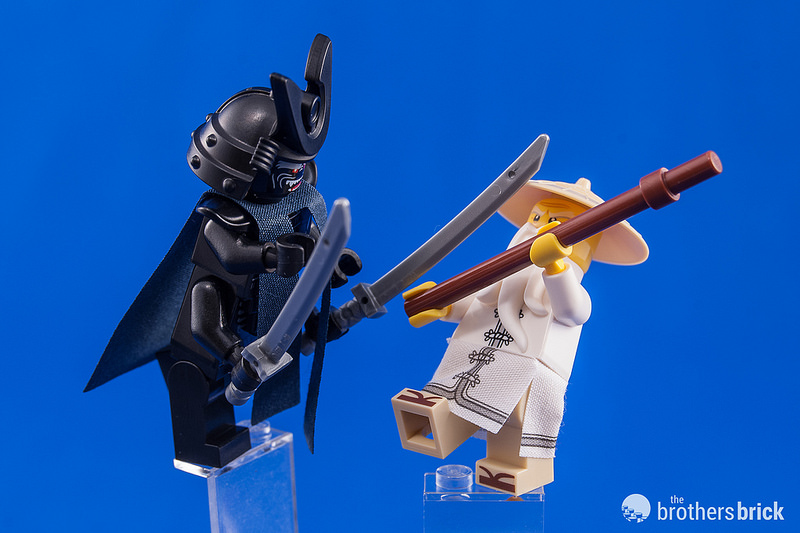 While I would have preferred a more balanced-looking dragon, the Green Mech Dragon glides his way into my top five LEGO dragons, and my top spot for Ninjago dragons. At $49.99 for 544 pieces, it’s right on point for price and is an especially good deal for stocking up on sand green and warm gold parts.

If you collect minifigures, this is the lowest priced set with Garmadon in armor print, as he’s rocking the CMF-style bare chest in 70608 Master Falls ($29.99). 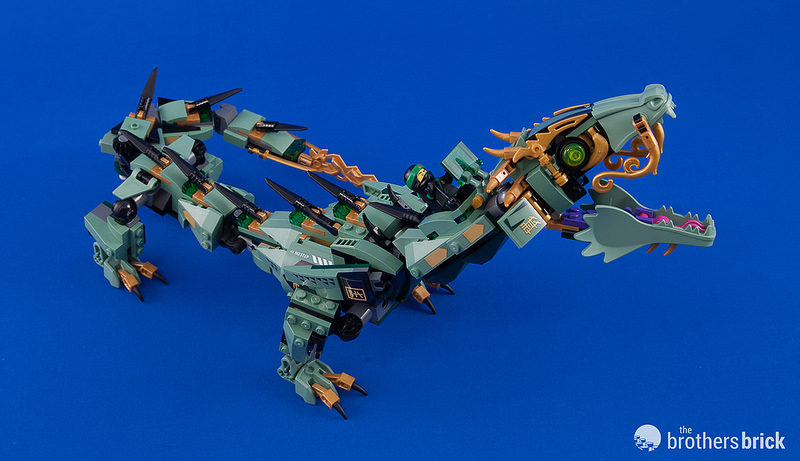