With only two months left until The LEGO Ninjago Movie, we’re finally getting to review the movie tie-in sets. We got an exclusive sneak peek at Toy Fair in February, but LEGO had banned photography at the time, so we had to wait until June to even show the first pictures. Now, we’re able kick things off big with a review of 70617 Temple of the Ultimate Ultimate Weapon. This set is due for release August 1, 2017 and has 1,403 pieces. It will retail for $99.99 USD. 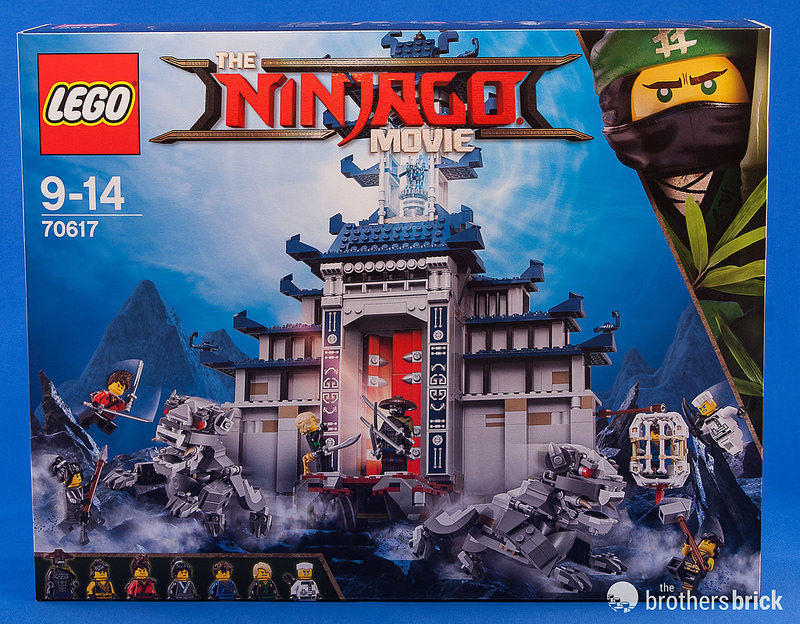 The Temple of the Ultimate Ultimate Weapon is the third largest set in the series, behind 70618 Destiny’s Bounty and 70620 NINJAGO City. The completed model is a temple façade with two Chinese-style guardian lions, and the overall color theme is sure to please castle builders, as it contains a healthy serving of grey bricks. The main accent color is dark blue, which nicely offsets the grey.

Our review copy’s box has only the set number on it, with no name or part count, though many countries will have this info on there. While the set’s name is Temple of the Ultimate Ultimate Weapon, some early press materials we received referred to the it as the Temple of Ultimate Trials, so it’s likely the set underwent a name change not too long before release. The box itself features the characters and model posed in an epic action scene, while the back of the box shows the numerous play features and dimensions, which is par for the course. 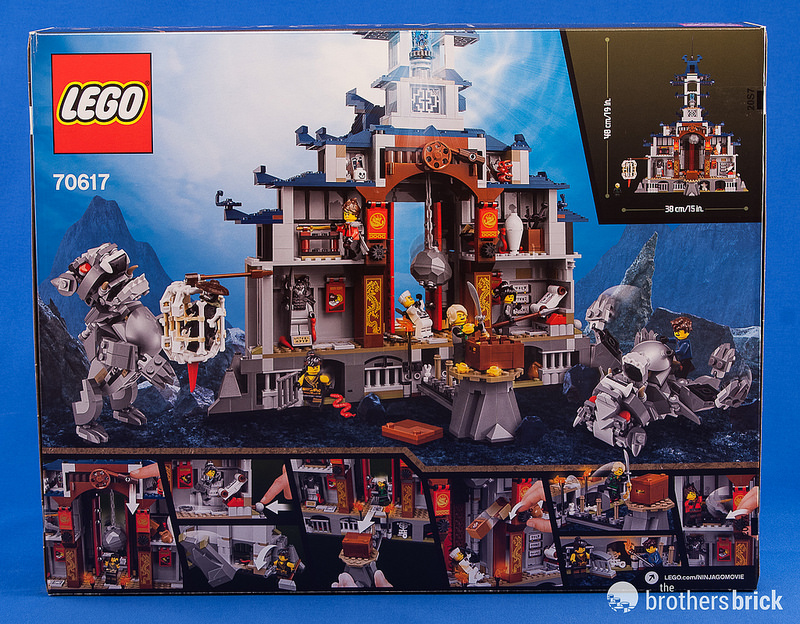 Once the box is open, you will find 12 numbered bags and a large, book style instruction manual. The instructions are in their own bag with the sheet of stickers. 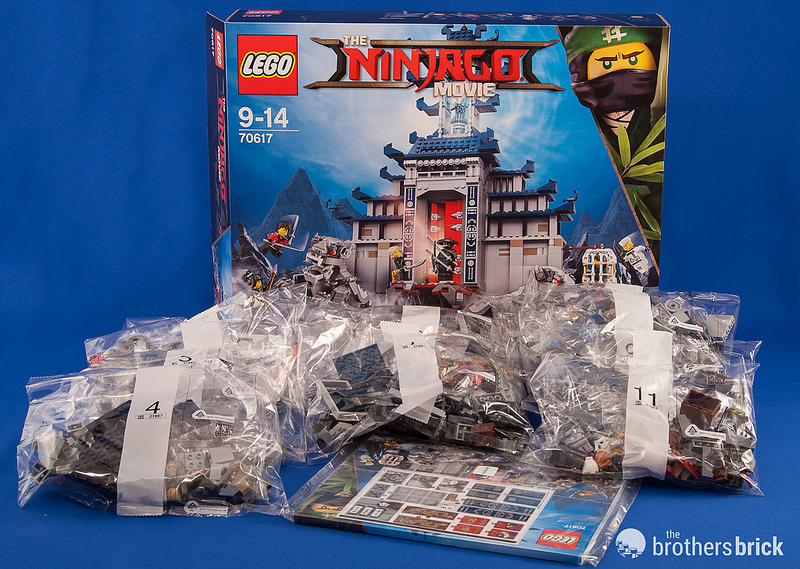 The set is full of stickers. Aside from anything minifig related, only two parts are printed and they aren’t new to this set. One of my sticker pet peeves is having to line up multiple stickers to get a desired effect across multiple parts, and that’s required on the door frame. There are four stickers on four tiles that need to line up to look okay, and having to do that takes away from the build experience. Nevertheless, once applied the stickers are lovely. They are mostly applied to panels and tiles, so they’re likely to find some great decorative uses outside of the set, which I can’t say about the stickers for all sets we’ve reviewed. In this case, though, I liked the stickers and am already planning their use in future builds. 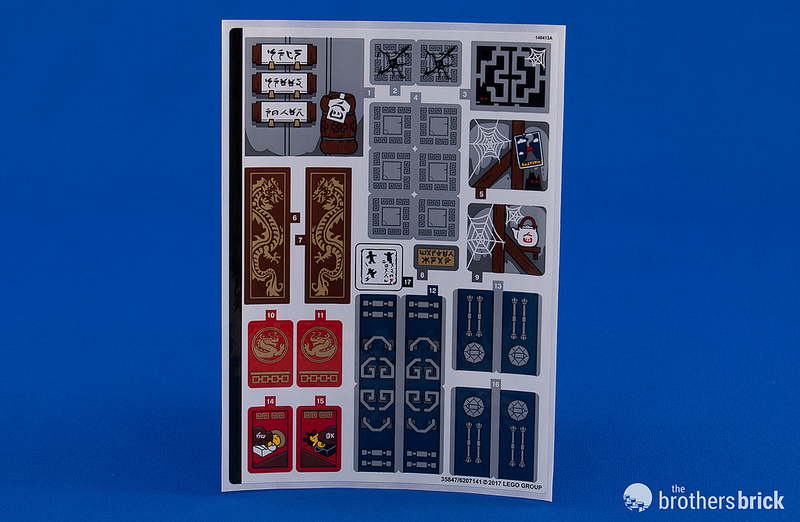 Bags one and two build your two Chinese-style guardian lions. The creatures have great articulation, similar to the Elves dragons. Their chest uses a piece Hero Factory-style element previously seen in 74118 Captain Phasma and 75107 Jango Fett, which gives a great organic look to the characters while their overall bulkiness is in keeping with the source material. 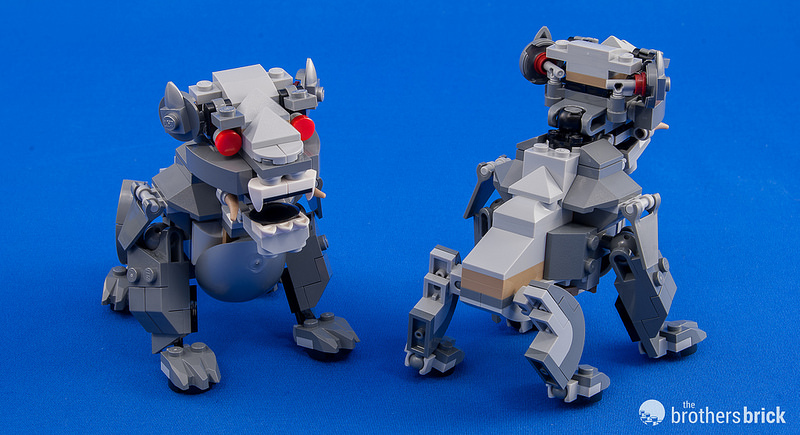 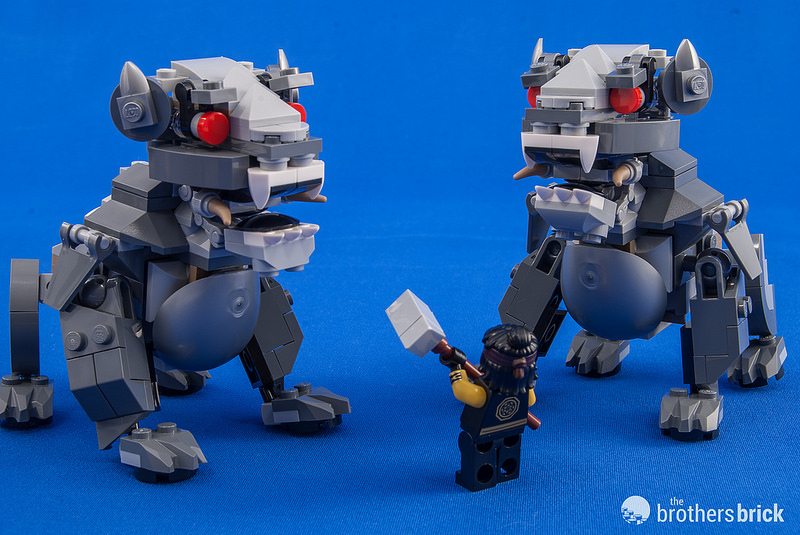 One disappointment was on the head: the part that the ear bits attach had a rare flaw in its tolerance. The ears are connected with light grey nozzles stuck into a 1×4 split-level plate. The left ear on both is very loose, and swings around while the right ear holds fast. Fit issues are so unusual with LEGO that it jumped out immediately. A closer examination with other elements shows that the issue lies specifically with a joining of the two elements here, as the nozzle handle is just a hair smaller than most bar diameters—not enough to make a difference with most elements, but noticeable when paired with the also slightly offsize left hole on the plate. The plate has normal clutch when paired with other bar elements. 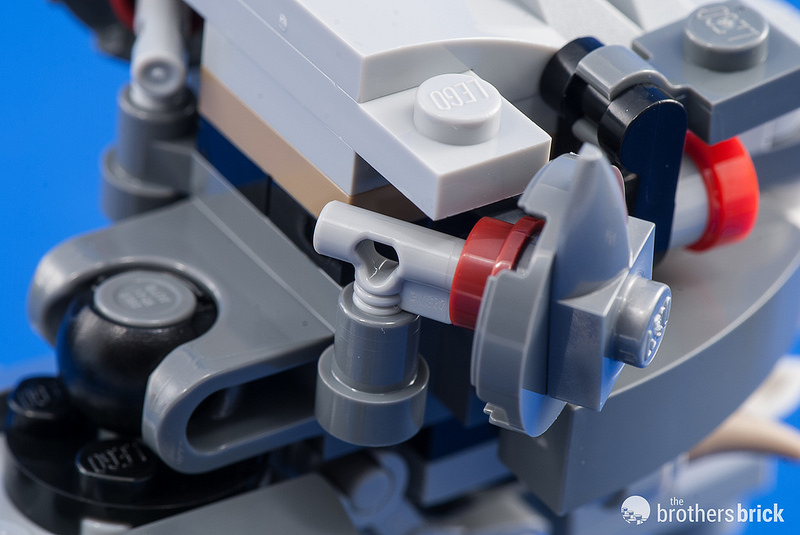 Each lion uses two 1x1x2 red bricks with two studs on one side – a new piece! This is the only new element (aside from minifigure bits) in this set. You receive four, and they go into the heart of the lion. 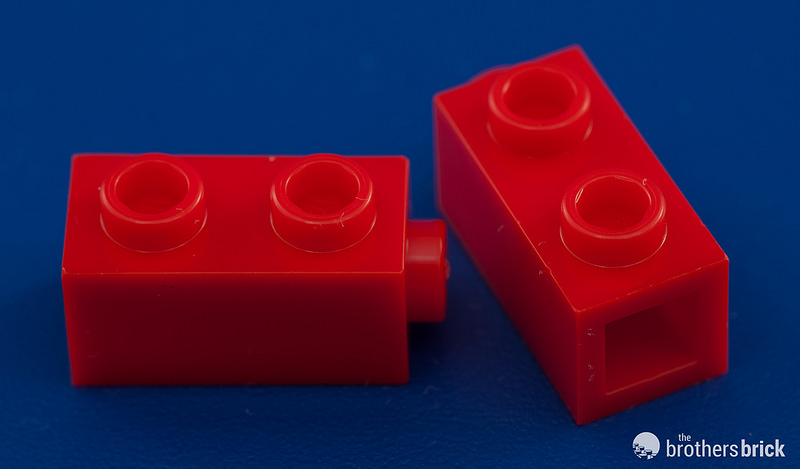 The majority of this model is made of light grey 1x4x3 walls and light grey frames with light grey inserts. From a construction perspective, there is very little in the build that stands out. There are precious few places where advanced techniques are used, with this set following in the tradition of large building facades that LEGO has been doing since the 80s.

The base is a sewer with skeletons, and later, snakes. These early steps show the casual building style the whole set takes; a large number of panels of different shapes and sizes that give the set height and width and reduce part count.

The two sides are largely mirrored, but unlike some older sets, this building does not hinge open and shut. 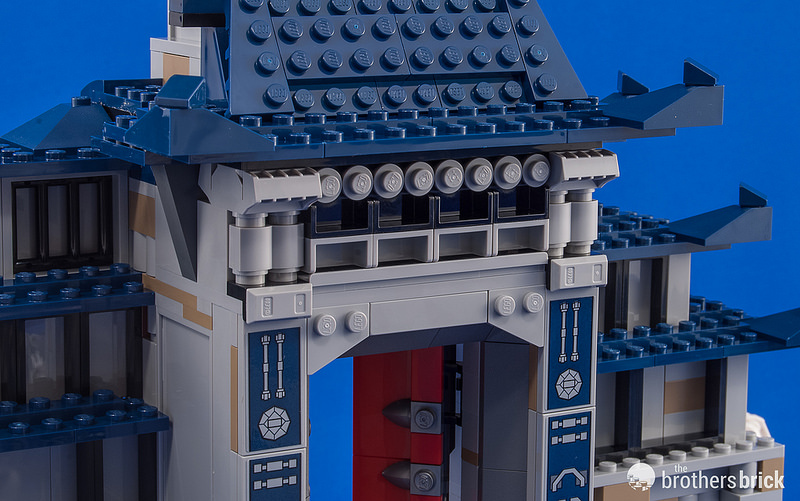 While the build experience may not be challenging for experienced builders, the final model is lovely. The model, from the front, looks foreboding and impressive (especially with the red-eyed guardian lions right there!) and has a whimsical—almost painterly—caricatured look.

The front side of the facade has surprisingly simple curves on the roof, partially achieved with scorpions. The rock base implies this may be somewhere mountainous, while the bright red doors stand out well. 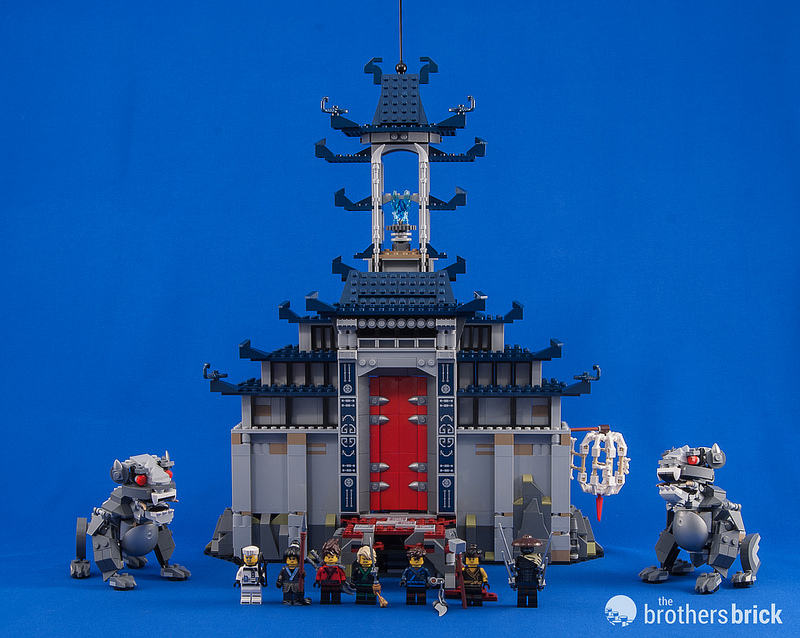 At the top of the temple sits a crystal surrounded by blue blame pieces. The tower is made of empty grey window frames and arches. It manages to be remarkably stable, helped by the large bladed weapons clipped to the front. 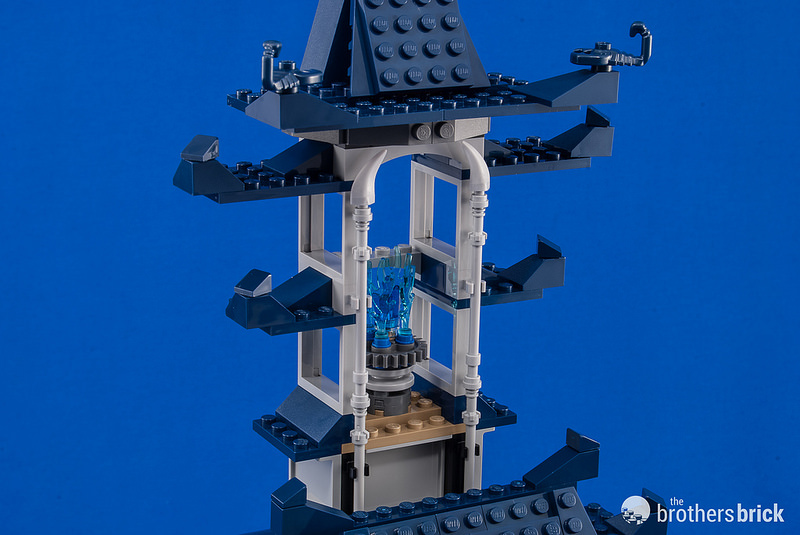 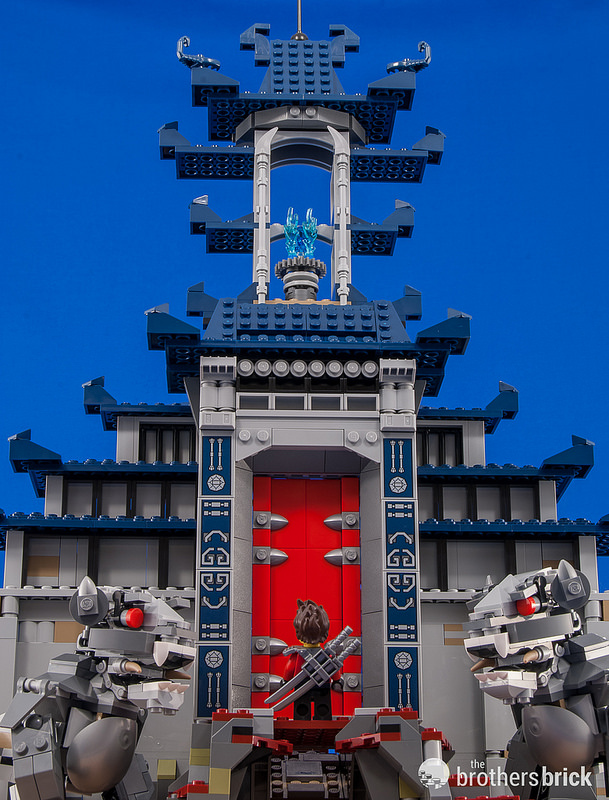 The doors swing inward, daring visitors to come inside. This puts guests directly in the path of a falling rock booby trap. The doors caught a bit on the underlying pieces for me, though your mileage may vary on that if you press everything down thoroughly. 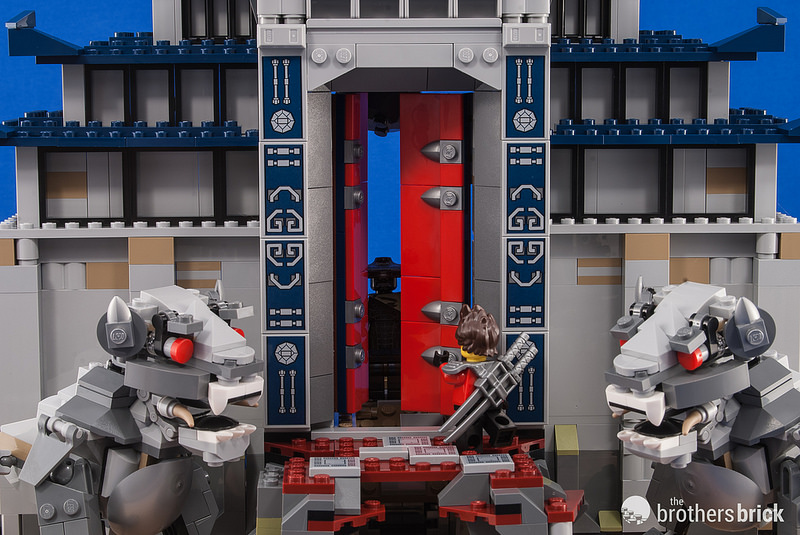 From the rear of the facade, you see the different rooms in the temple. The attic space has one of the new spiders that debuted in the City Jungle line. The upper left room has a stand displaying a katana with a skull, and the bottom floor on the left has an armored statue featuring ornate armor we first encountered in our review of 70621 Vermillion Attack. 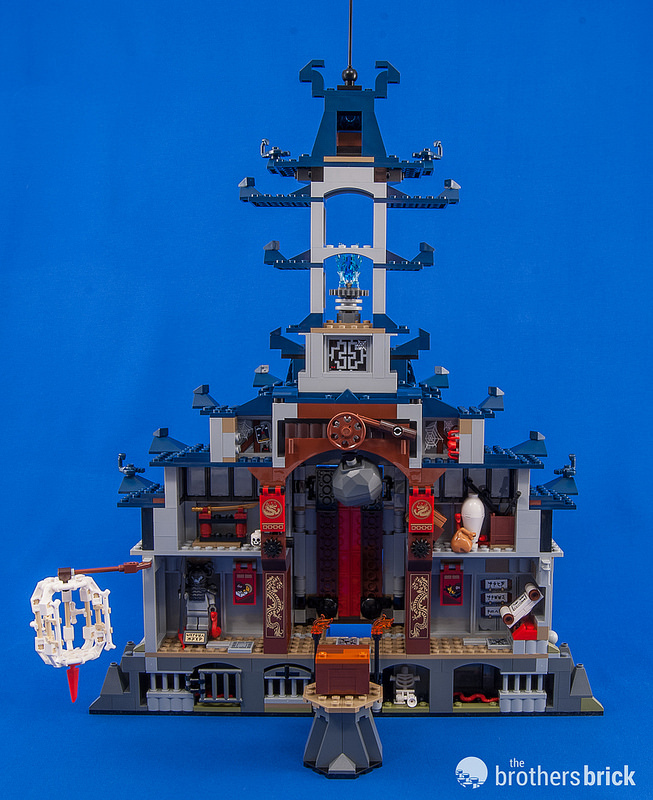 The room on the upper right is weapons storage, guarded by a snake. Below on the right is a scroll with a hidden disc shooter. 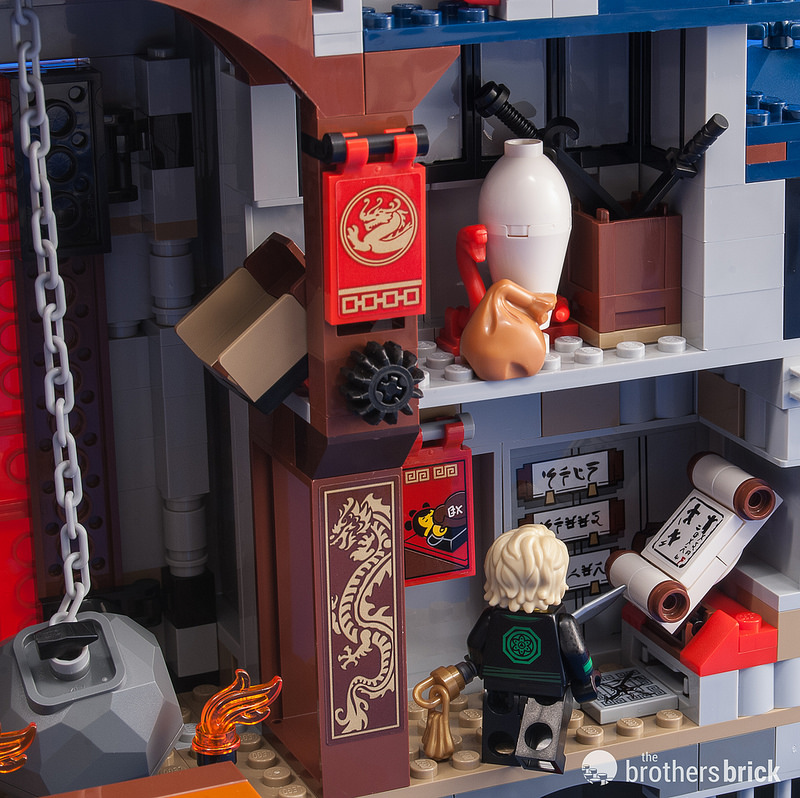 Access to the underground snake-infested sewer comes from either opening a gate or pulling out a grate. Your pick! 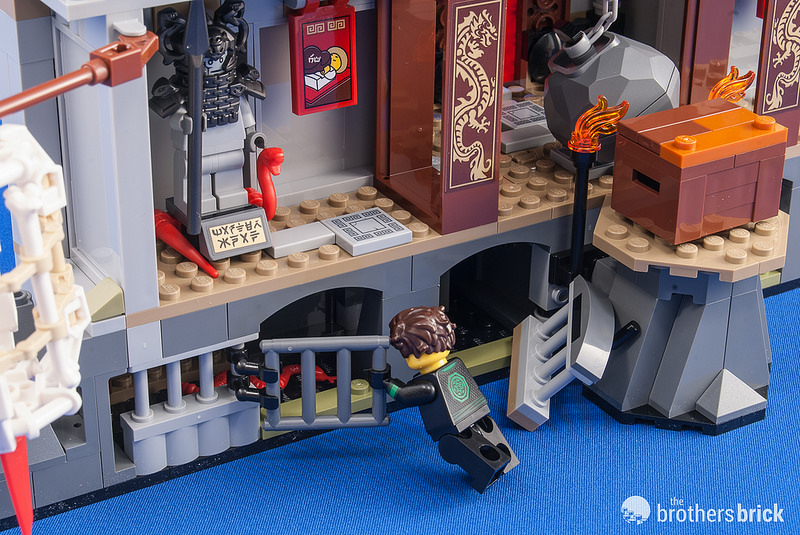 There are quite a few play features scattered about the various rooms. Up above on the right is a box of dynamite that you tip by turning the black gear; on the other side is a clunky sword – the very same one as we first saw in the Fantasy Era Trolls sets back in 2009.

On the right side of the temple is a small lever. Pull it to knock out a bit of rockery to access the catacombs underneath, which are full of snakes and skeletons. 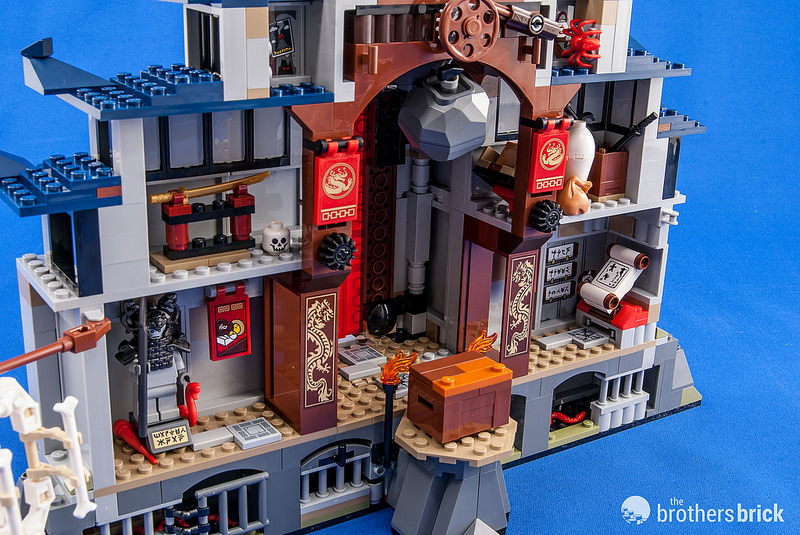 My personal favorite is the rock trap. If you press down on the lever, a stone on a chain falls right into the foyer. Or, should you wish to send someone out of the temple quickly, have them stand just inside the door. Pull the platform with the box full of gold, and the trapdoor will open and deposit them out front, under the stairs. 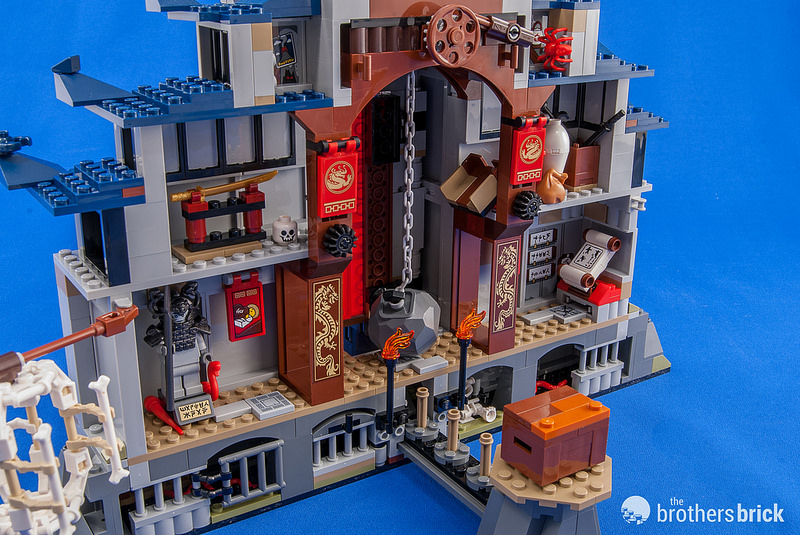 The temple also has a bone cage, hanging off a ledge. I’m not entirely sure what the red spike at the bottom is supposed to represent, though if this were a fan build, I’d call it dripping blood. LEGO wouldn’t do that, right? 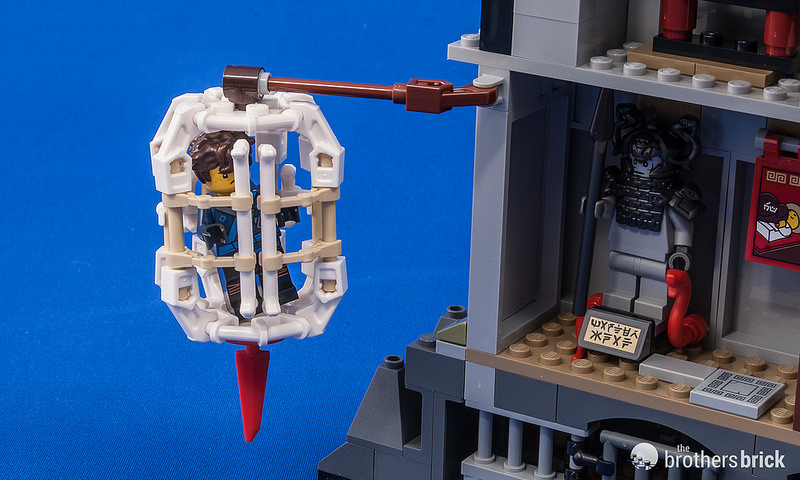 As mentioned above, there is only one new brick mold: the 1x1x2 brick with two studs on one side. I see this part having a lot of fans, and being pretty useful in a number of fan builds.

Aside from that, this set featured just one new hairpiece that we haven’t yet seen in other sets nor even in the 71019 LEGO Ninjago Movie Collectible Minifigures. 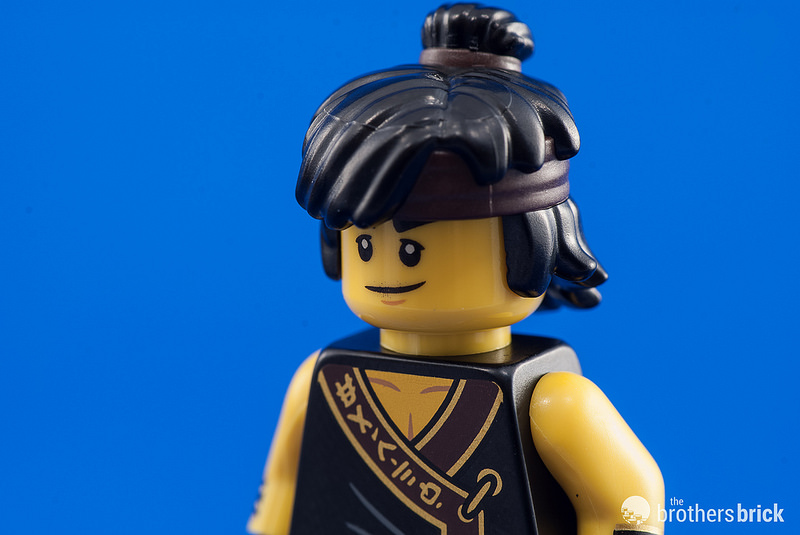 Garmadon, ever the fashion forward villain, has a snazzy new camouflage pauldron (I think of it as a tiny shoulder cape). In this set, it’s all he wears on his torso. 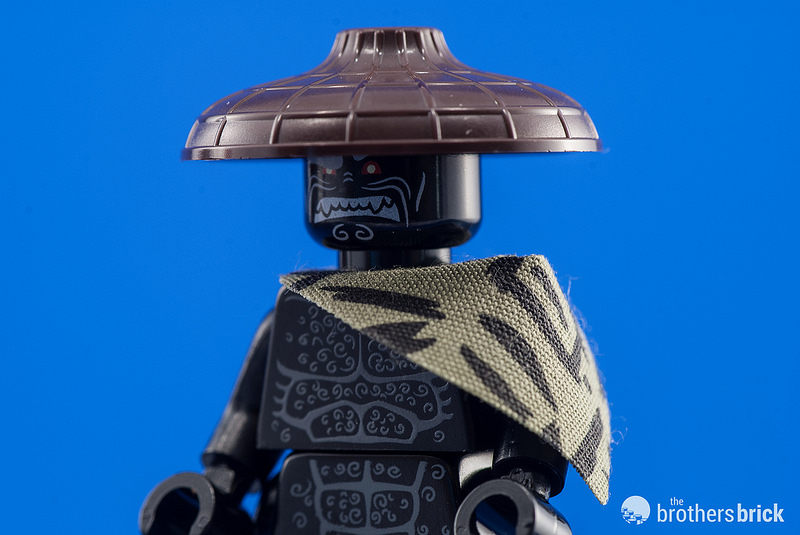 The scorpion now comes in Dark Blue, so for those of you that like animals in a variety of colors, you’ve got a new addition to your zoo.

The set features all five ninjas, all decked out in their ninja garb. The faces are all double sided, with the exception of Zane, who sports a buzzed look. The ninja torsos all have their emblem on the back.

Nobody has side-printed legs, and the statue has no printing on the body at all. Lloyd, the Green Ninja, has the same fantastic black-on-black printing that we saw in his collectible minifigure appearance. 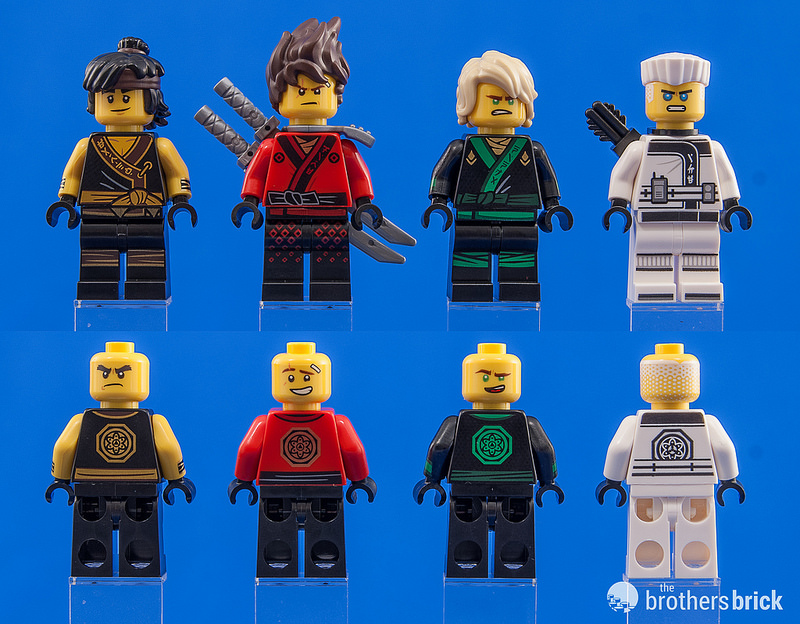 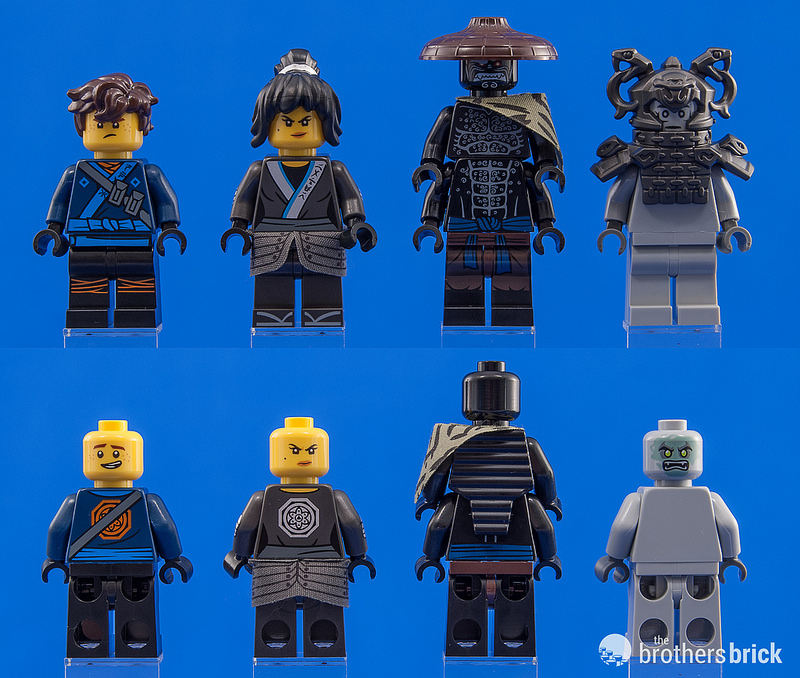 With the helmet removed, the statue looks strikingly like a medieval Darth Vader. 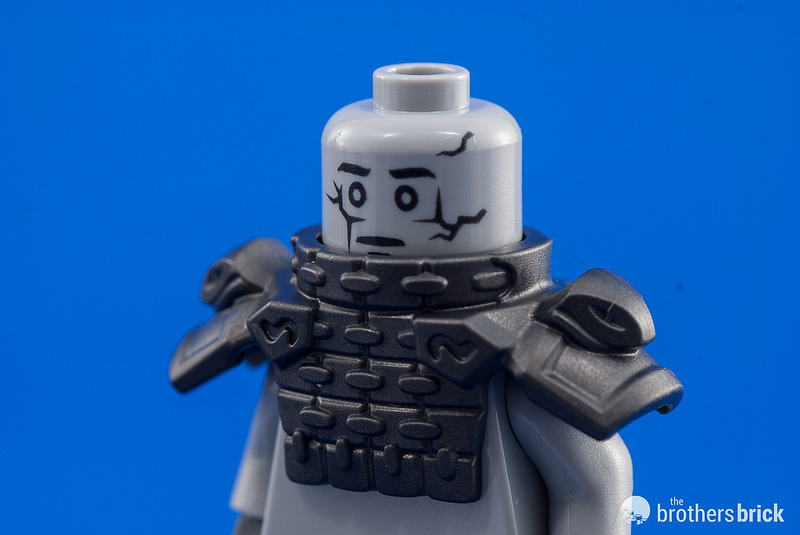 Whether you buy this set at full price or find it on sale, pick it up. The Chinese guardian lions are fantastic builds, and once built, the temple façade is satisfying and lovely to look at.

If you value sets based on their price to parts ratio, then you’ll definitely want to pick this up, which rings in at $0.07 per part. If you aren’t concerned about price to part ratios or completing a collection though, see if you can’t snag this on sale on Amazon down the line.