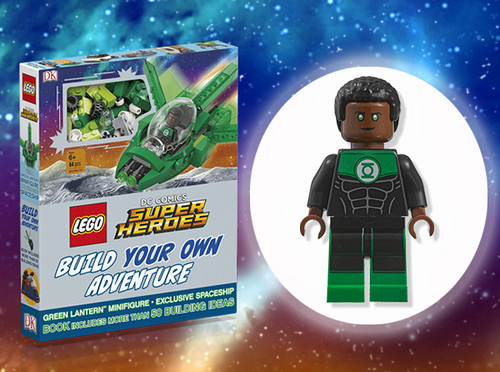 As with all the LEGO BYOA books, the pack includes a hardback book and a separate cardboard box that fit neatly together. One side of the cardboard box is a laminated scene to use as a setting for imaginative play with your creations. The 80-page hardcover volume includes a Green Lantern minifigure and small selection of bricks to create a model vehicle. It features building tips and more than 50 small models to use as inspiration for building with your own bricks.

Green Lantern is a vastly under-represented superhero in the LEGO line-up with only two previous minifigures released — a SDCC exclusive in 2011, and the Hal Jordan version of the Green Lantern in 76025 Green Lantern vs. Sinestro, released in 2015. The new and exclusive minifigure supplied is Jordan’s fellow lantern from Earth, John Stewart and this is his first LEGO minifigure incarnation. 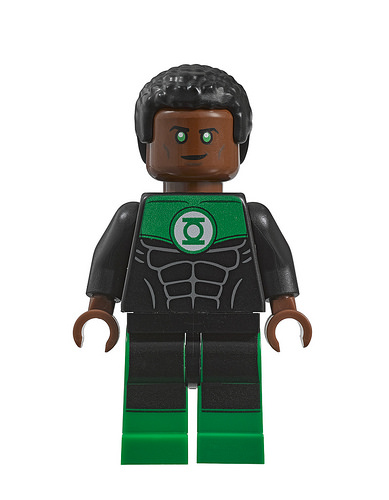 There are approximately 80 parts supplied, which include a pleasing mix of bright green, lime green, and trans neon green, not to mention five 1×1 tile with 1/2 circle (aka Stadium tile) in green — previously exclusive to 21133 The Witch Hut, a recent Minecraft set. The parts are used to create Green Lantern’s ship, and those trans neon green pieces are very important as they “show that it is an energy construct made of solid light”. Plus they are actually pretty cool parts. 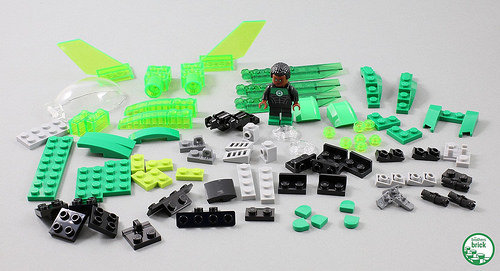 Using the book’s instructions, the parts create the space ship that Green Lantern controls by “thinking about what he wants it to do”. Let’s hope he doesn’t start day-dreaming while at the helm! 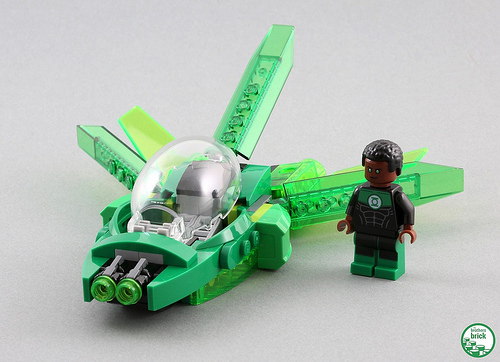 By raising the tail and folding back the side fins, the ship can be transformed into submarine mode, for a later chapter in the book involving Aquaman. Within the story, two other modes of transport are used, namely a hoverboard and water jet, and these have breakdown views that make them simple to construct with your own bricks. I didn’t quite have all the matching colours, but I only had to use lime green instead of regular green for one part as they use simple, common parts that are easy to replace if needed. 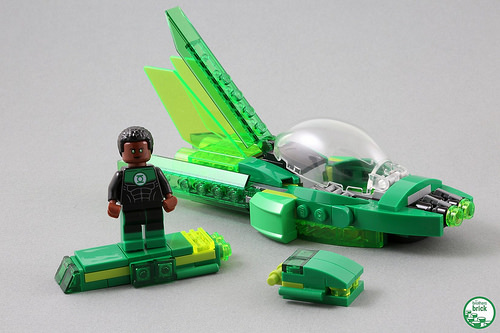 There are 5 chapters in the story, and each has one of the other members of the Justice League making a cameo appearance to help out Green Lantern on his intrepid adventures. Within the chapters, there are loose segues to introduce each character with a storyline and then, the best part, the inspirational models plus some building suggestions within a “what will you build?” area. Most significantly, the book offers a wealth of technical advice for recreating the models shown, including what parts to use, and tips on building techniques employed by master fan builders like Rod. To help make sense of these guidelines, there is also a “Builder Talk” section at the start explaining the language that builders use to describe various different kinds of LEGO bricks.

Green Lantern heads to meet up with Wonder Woman first and does some training at her makeshift fight club training ground in the woods. I decided to build the simple training dummy for Green Lantern to practice his crime fighting techniques. (Note: the net is not included in the parts) 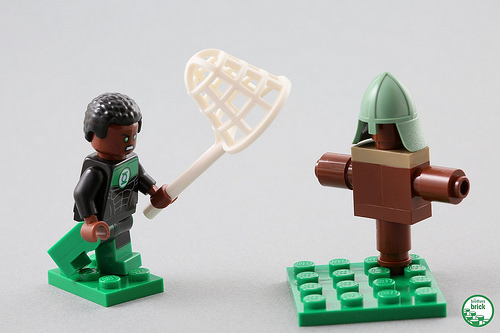 Next they head to a temple and — as you can see from this example page from the book — there are a few inspirational builds to get your creative juices flowing, with a storyline and some superhero commentary. The suggestions this time are an Amazon armoury, a treasure trove, or a throne — good ideas that will stimulate the imagination of younger builders. 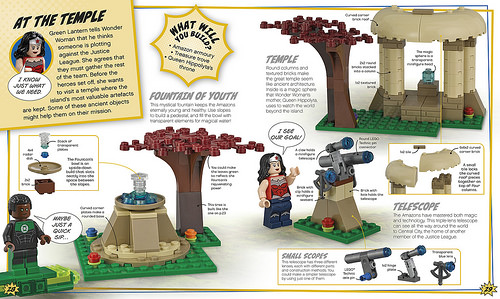 The Flash is the next hero we visit, including a trip to see the laboratory of his alter ego, Barry Allen — police scientist. 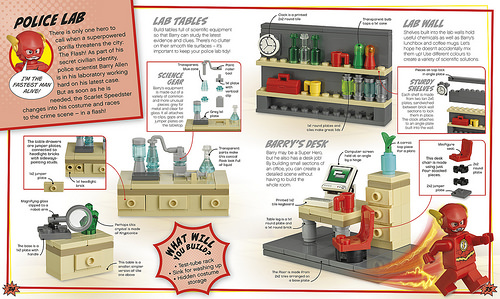 I thought the lab table was quite cool and decided to set Green Lantern up with his own lab to test the perfect colour of lipstick to match those emerald green eyes. Personally, I think this is the best way to utilise the book — get some inspiration and build a variation on the theme. 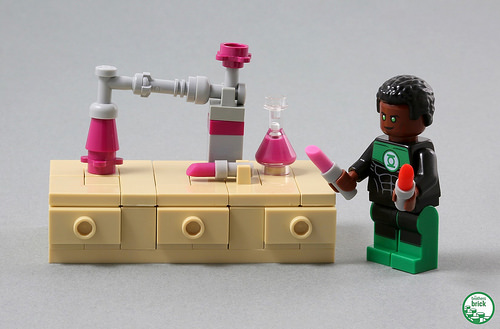 Green Lantern’s ship becomes a submarine as we head underwater to find Aquaman in the next chapter. This section of the story features Captain Cold and Mr Freeze as the cold-hearted criminals we are fighting against. More importantly, there are some cool builds like an ice rig and a sea sled, plus other underwater-themed structures — all fun ideas for kids to emulate with their own bricks. 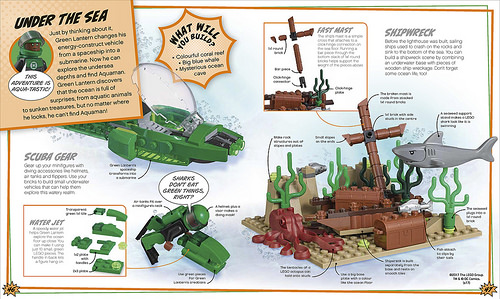 My favourite chapter is next as we head to Smallville to find Superman. I loved the little models in the busy city of Metropolis, and especially down on the farm. For example, a water tower, tractor, chicken coop, and some cute little chickens! I was inspired to build those pesky chickens stealing poor Farmer Joe’s corn. Just as well Green Lantern has been honing his crime fighting (and capture) skills. 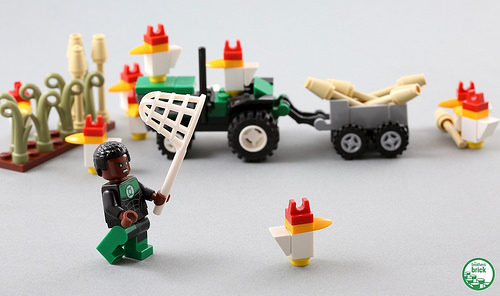 Finally we end up in Lex Luthor’s lair where Batman joins the team to face up to a lot of futuristic technology. As well as Luthor tech such as a drone, bot, jammer, laser gate, and a huge ‘ultimate weapon’, each member of the Justice League creates their own vehicle. This is a great way to cover some of the methods used to build tracked and wheeled vehicles, a mecha, and a flying machine for Batman (in black of course). There’s also a cute little spybot that Green Lantern wants to take a closer look at — a good example of one of the simple cool little builds that sit alongside the vehicles and mecha in this grand finale. 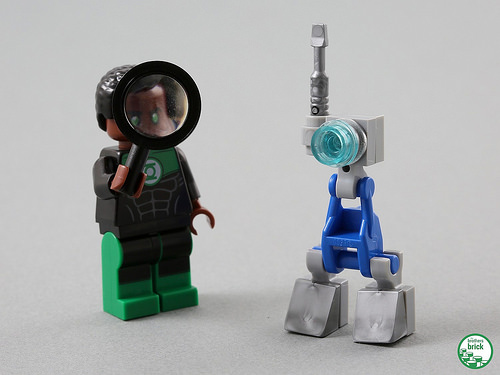 Overall, the LEGO BYOA books have mastered the art of mixing LEGO’s popular themes with inspiration. The models are simple enough to be within reach of the average young builder, but clever enough to be fun and inspiring. The tips and parts suggestions are top-notch, and I couldn’t help but create a couple of little builds when reading through the book as part of the review. The book is rated 6+ and some younger fans or less able builders may require adult assistance, but the fun storyline and bright images are sure to be a hit.

In addition to the story, the inspirational models, and some comedy comments from our favourite superheroes, there is a cool ship with has some useful parts, AND an exclusive rare Green Lantern minifigure. What more incentive do you need?

With model designer Rod Gillies so easily accessible to TBB, we decided to ask him a few questions about his newest book…

TBB: The book has an age guideline of 6+, what do you think this type of book can offer AFOLs, as most of our readers are 16+ rather than 6+?

RG: I’d hope they’d like some of the models as examples of ways to do superhero builds that look cool but don’t necessarily require thousands of rare parts or difficult/fragile connections so can stand up to a bit of “play”. Those are issues for AFOLs as much as kids.

TBB: What was the best thing about working on superheroes versus your previous model-building work for Star Wars and City?

RG: Although the Star Wars book visited different planets, there’s an overall “look” to Star Wars. It was great fun to create completely different styles of models for each of the superheroes in the team. It also prompted me to build a really wide variety of things — from tractors and cornfields to Wonder Woman’s mecha!

TBB: You’ve worked on 3 of the BYOA series now. What is the hardest thing about doing these books?

RG: Making sure the models are all “legal”. The temptation to cheat — to use an illegal connection, or force-fit something in that you wouldn’t even think twice about in a regular build — is nearly overwhelming. But DK and LEGO are very strict that the inspirational models are solid and well-built — which means kids won’t get frustrated if they copy them. Having to follow the rules, and the discussions I had with the LEGO guys in Billund, has given me an even deeper respect for the LEGO set designers.

TBB: Thanks for answering a few of our questions Rod. Now, get back to writing TBB posts!

Dorling Kindersley sent The Brothers Brick an early copy of this book for review. Providing TBB with products for review guarantees neither coverage nor positive reviews.