What started as a virtual model of the Lambda class T-4a shuttle expanded and grew over thirteen years into the towering creation you see before you. Polish LEGO builder Maciej Szymański has recreated the Imperial base on the forest moon of Endor from the conclusion of the Original Trilogy in Return of the Jedi. 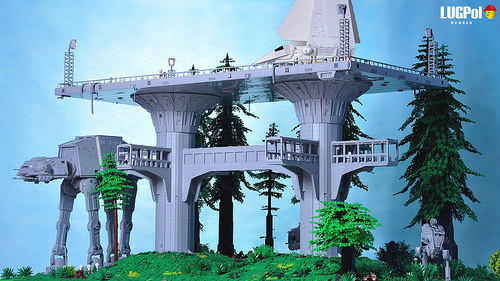 Maciej tells The Brothers Brick that the flat, top part of the landing platform alone is built from roughly 10,000 LEGO pieces (not including detailing, greebling, railings, and lights).

Maciej shared with us that the total height of Endor exceeds 125 cm (just over 4 feet) with the shuttle on the landing pad. The green base is 2 meters wide and 1.5 meters deep (6.5 feet by 5 feet). There is 63 kg of green bricks (mostly 2×4) in the hills under and around the platform. He used about 70 LEGO lights of different kinds, 9 LEGO electric motors, and 5 transformers to power all the functions. Other interesting facts: The custom AT-AT is approximately 7,000 elements, each AT-ST consists of almost 500 parts, each and there are altogether about 6,000 leaves on the trees.

With custom-built AT-AT and AT-ST walkers and stormtroopers patrolling the forest floor, which looks sculpted rather than built out of LEGO. The large twin towers use a number of clever curved building techniques and add some great lighting effects, almost making one forget that the whole platform is built entirely in light gray. 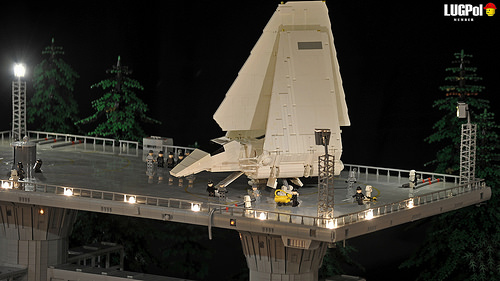 Crawling with Imperial forces, this brilliant scene has some of the most realistic giant redwoods I have seen. Looking at the close-ups you can really appreciate the level of detail in this magnificent build. The elegant light towers have been carefully constructed using gray LEGO tubing and minifig hands – and what’s more, feature working lights! 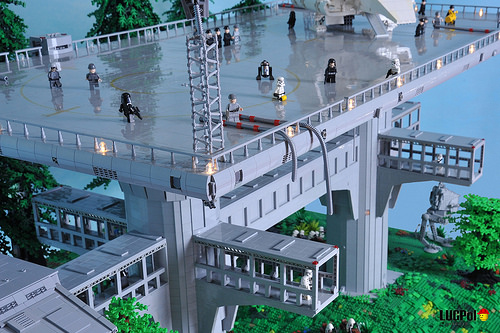 Easily the best creation depicting the Imperial forces on the Endor that I’ve seen in a long time! This photo with the proud builder shows just how huge this labor of love truly is. 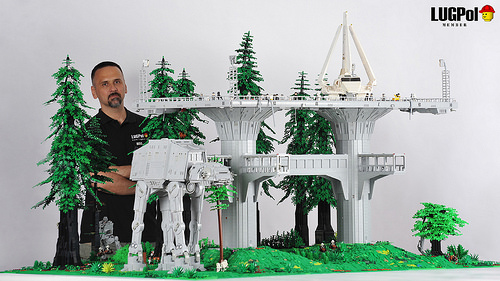 You may well be wondering how one transports a structure like this. Well, the whole thing weighs up to 200 kg and – in boxes and crates – takes the better part of a Ford Transit van! Once transported, it took 19 hours of non-stop work to assemble the entire Endor scene for its first exhibition last weekend. That’s what happens when you must attach each and every branch from the 1-meter tall sequoias.