Summer is a wonderful time of no obligations and worries for a school-age young adult such as myself. The past two years it has also meant entering the Summer Joust contest, which has just concluded. Last year I went small and built a microscale castle being attacked by a dragon, but with the addition of the “Immersive LEGO Scene” category this year (possibly my favorite type of LEGO creation) I knew I had give it a go. My first idea was to build a knight returning from battle, like we see in so many medieval movies and books, so I went with it, and this was the result: 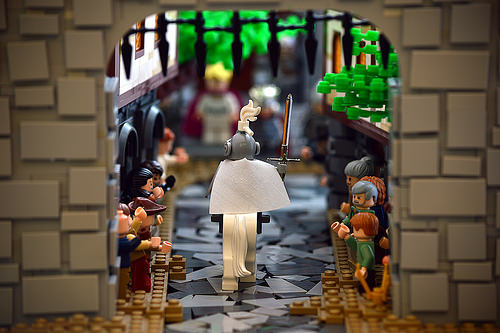 The build presented the perfect chance to use a crazy arm by CrazyBricks, and one of those beautiful chrome silver Brickarms claymores. While I was building, I had doubts about how this scene would turn out; it’s hard to envision how a scene is going to look before taking the picture, usually because they look like this: 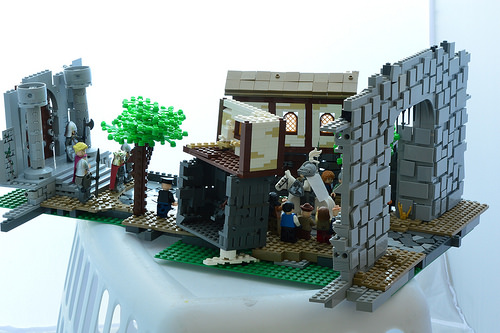 I know right? Pretty ugly, but scenes are only meant for that one angle, that one shot you take and post to the Internet, so they can be pretty disheartening to look at while building. Despite this, I kept going and ended up with a really cool shot, and the more I look at it, the more I like it. And yes, that is a laundry basket – I needed something to stand it on and the basket was close by. Whatever works! 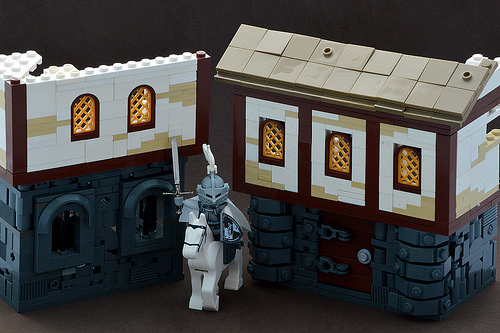 Above is a shot of the two houses I was disappointed didn’t get shown better in the final scene. I am particularly proud of the one on the right. I like the nice round rock work I was able to get in the corners of the house, and I was able to use some zip line thingies as hinges on the door.

Great job to all the entrants of this year’s Summer Joust, there were so many top notch entries this year, it was great to watch! Now I’ll be back to my regularly scheduled Sci-fi programming. Thanks for reading, and see you all next year!