BobDeQuatre says he doesn’t have the skills for castle building, but his recent entry in the Summer Joust 2017 build challenge’s 8×8 vignette category is one of the best entries I’ve seen yet. The story behind the build is that the castle was built by northern men, enslaved by the black queen. After the castle was completed she summoned a magical storm which lifted the castle up to make it impenetrable to her enemies. The builder has represented the storm perfectly by using a NEXO Knights whirlwind part, along with other dark purple bricks that bleed into the base of the castle. 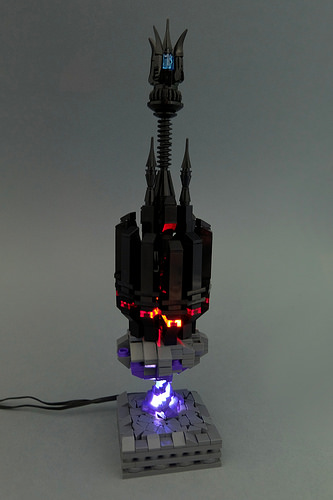 However, the lighting is what really sets this vignette apart from the crowd — it adds an epic effect to the storm by shining through the transparent portion of the NEXO Knights piece, adding a sinister red glow fitting of the castles backstory.