It’s been months since The LEGO Batman Movie hit screens to become one of the best pictures of the year. But the party isn’t over — five more LEGO sets are just out, bringing some of Batman’s most loveable enemies. The Brothers Brick has already covered the summer wave’s flagship, 70917 The Ultimate Batmobile, but the smaller boxes still hold some surprises. 70913 Scarecrow Fearful Face-off has 141 pieces, making it the third-smallest box among the LEGO Batman Movie sets, but its retail price of $14.99 makes it a perfect choice for Bat-fans looking to add to their collection. 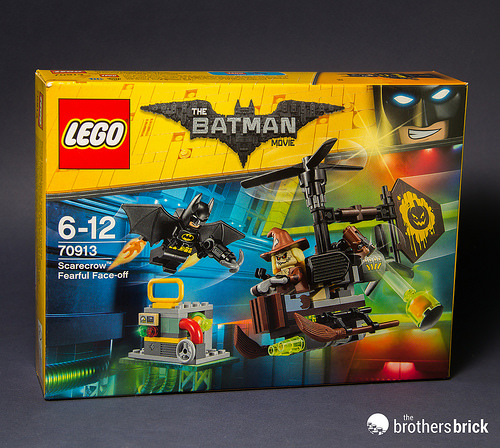 It’s not the first time Batman has met Scarecrow in this line. In 70910 Scarecrow Special Delivery the villain tried to break into the Gotham energy plant disguised as a pizza delivery driver. This time the bad guy shows up piloting a helipcopter and bombarding the facility with fear gas bombs. 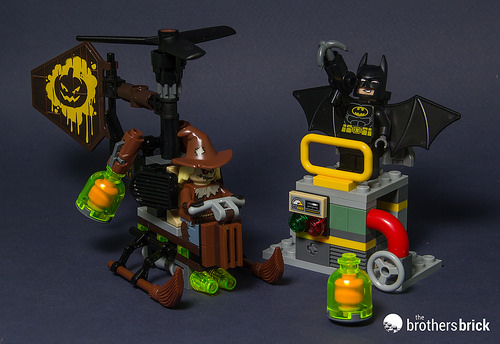 The back of the box tells us to get ready for action. There are three play functions — not bad for such a small set… 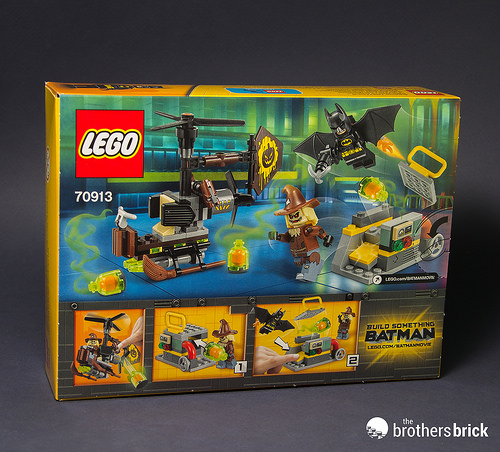 Four of the five stickers are elements of the Scarecrow’s copter’s design. Without them the aircraft won’t feel complete. 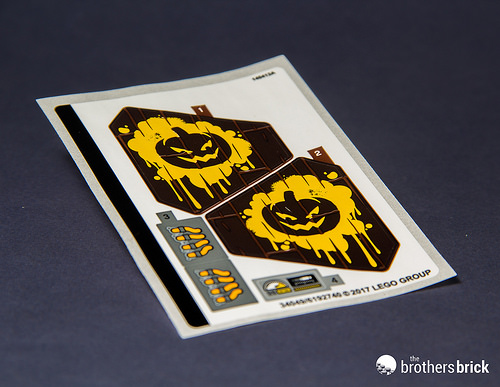 The Scarecrow minifigure is the true star of the set. With some great printing and a gorgeous hat, it deserves a special place in the pantheon of Batman’s enemies. But the faces made me a little sad —
they look almost identical. A scared Scarecrow’s face could have brought some fun new play scenarios to this set. 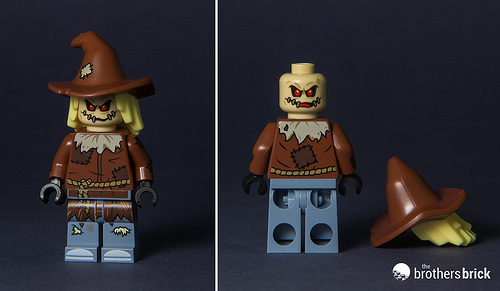 And Batman, well, he’s just… Batman. The minifigure is neither new nor special, and even his utility belt is printed. The reason for this is to allow the moulded bat wings piece to fit properly. 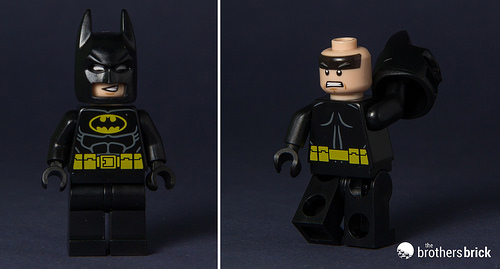 As for interesting parts, a red macaroni piece is not new as we’ve seen it both in 70901 Mr. Freeze Ice Attack and 70900 The Joker Balloon Escape, although red remains an exclusive color for the LEGO Batman Movie sets. A plain orange minifig head (three in the set) is a nice gift for piece-collectors. And, finally, it’s a pleasure to meet a couple of Technic parts — a driving ring extension and a pin connector #2 — in some uncommon colors. 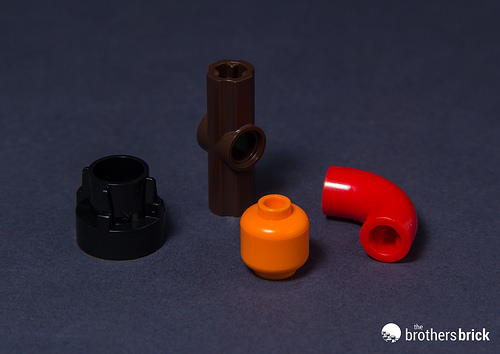 The black bat wings accessory is not new, but it’s been 5 years since we saw it the last time. 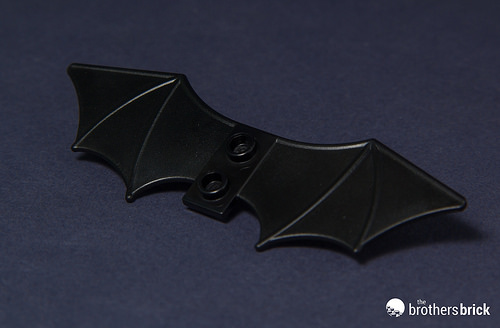 This piece turned out to be one of the biggest surprises for me. As I opened the parts bags, I was suddenly taken aback by the absence of a cloth-cape. Shame on me, it wasn’t until I finished the minifigure did I realize this is the only Batman Movie box that includes a capeless superhero. Unfortunately the bat wings neither look particularly impressive nor create any new possibilities for play. In fact, they get in the way of playing with the figures. 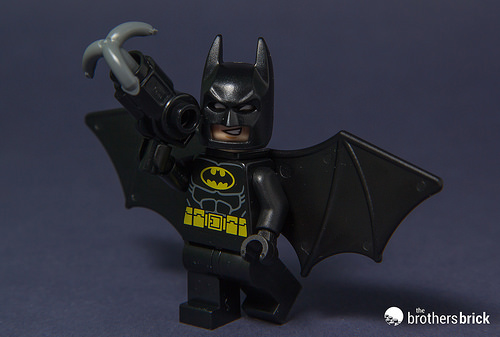 Once Batman has his wings on there’s no way you can rotate his arms backwards past a certain point — and it’s really, really frustrating, 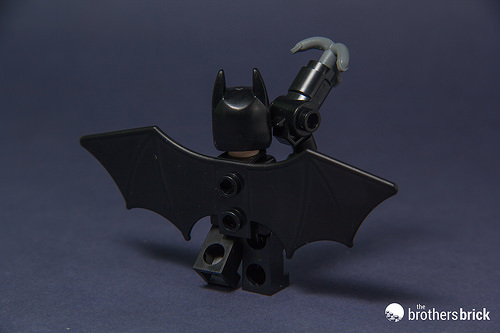 A couple of spare studs on the back of wings aren’t that useful. Even a simple brick attached there makes it simply impossible for Batman to stand upright without being stuck to a studded floor. I presume kids loved the wings piece in testing, but I can hardly see “falling-over-Batman” as a playable feature. 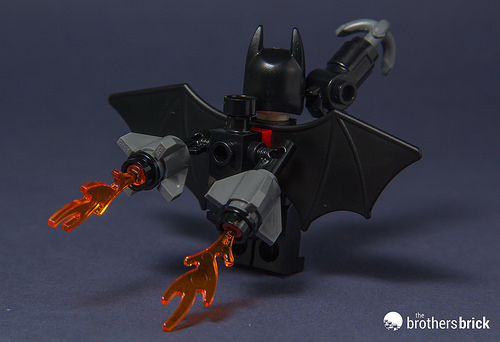 The Scarecrow’s helicopter helps to offset a poor first impression for this set. Were I to build a simple aircraft for a LEGO villain, it would have to be a straightforward gyroplane with a huge barrel gun. But this little helicopter is much more intriguing that just a polybag-style construction. I must admit I found myself completely captivated by the building process — this tiny thing features several separate modules with studs facing various directions. 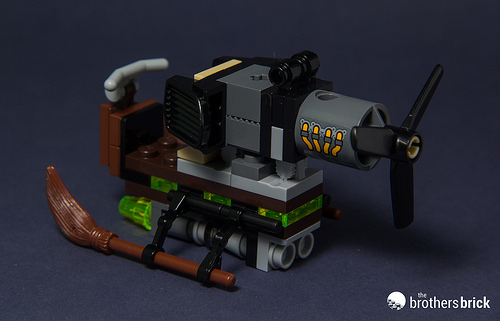 Once completed, the helicopter looks and feels clumsy, cobbled-together, and very funny. It’s a perfect fit for Scarecrow in the LEGO Batman movie universe. 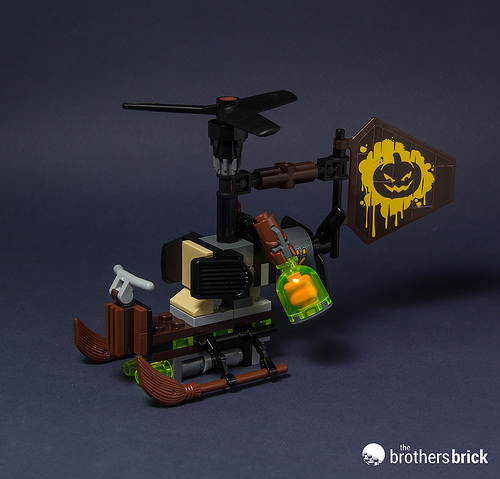 A bomb cannon on each side provides Scarecrow’s military hardware. Being all-too familiar, and not impressed, with stud shooters, I wasn’t sure this mechanism would work. But I was totally wrong! The bombs are heavy enough not to dart off to an undisclosed location, but rather drop down along a smooth curved trajectory. The helicopter’s side view shows both shooters can be slightly rotated making the aiming pretty enjoyable. At the same time there’s plenty of space to hold the model without accidentally dropping any bombs. All in all, a good, robust, and fun aircraft. A great addition to the set. 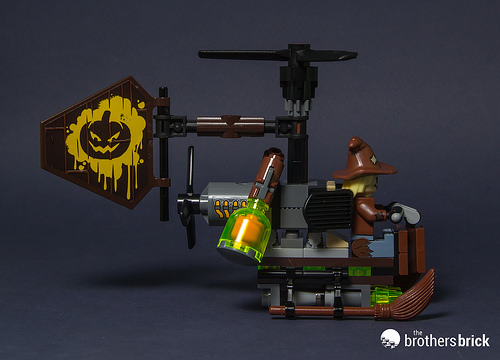 Finally, a face-off needs a suitable location. A tiny build representing a random part of the Gotham energy plant is more than enough as a setting for some full-on dramatic action. 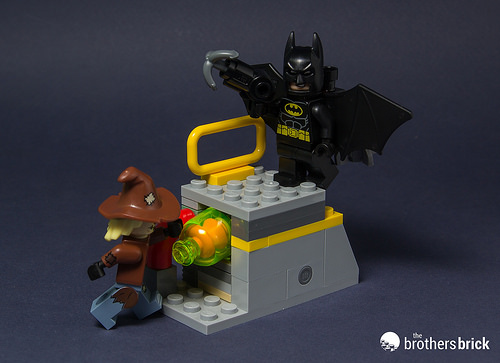 Despite being the same style as the scenery in the three winter sets — 70900 The Joker Balloon Escape, 70901 Mr. Freeze Ice Attack and 70910 Scarecrow Special Delivery — this small build isn’t designed to interlock with other parts of the plant. However, the scenery does contain a place to hide a bomb inside the structure, and a play feature to blow it up by pushing on a tile. The function is simple and works well, but I seriously doubt bomb damage in a power plant would be limited to a single detached plate! 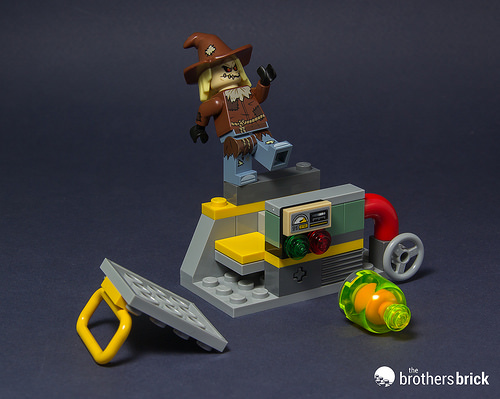 To sum up, the Batman movie sets are no longer about Batman himself, but more about other characters, especially the villains. The Scarecrow minifigure is excellent — probably the best one we’ve seen in recent years. Unfortunately, the villainous figure is really the only reason to get this set, unless there are particular pieces you’re interested in. Sorry, Batman, but today is not your day. 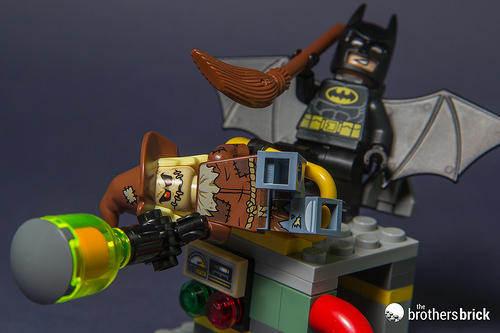