After Rey and Finn escape Jakku in the Millennium Falcon rather than a Quadjumper, they get captured by the massive Eravana. Once aboard Han & Chewie’s new freighter, much adventure ensues. Complementing the minifig selection in the 75105 Millennium Falcon from the release of The Force Awakens in 2015 (with Kanjiklub gang members), 75180 Rathtar Escape depicts the confrontation between our plucky heroes and the Guavian death gang while attempting to escape loosed rathtars. 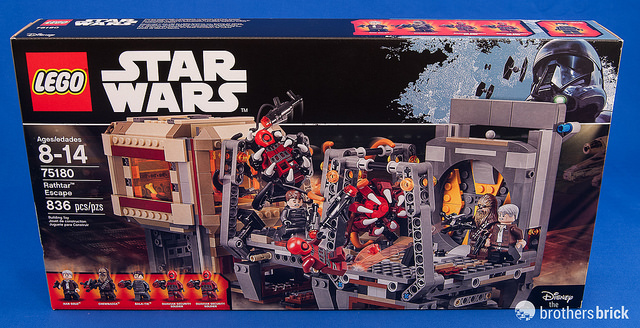 The set’s 836 pieces come in 6 numbered bags, with the 140-page instruction booklet in its own bag. There are no stickers in the set. 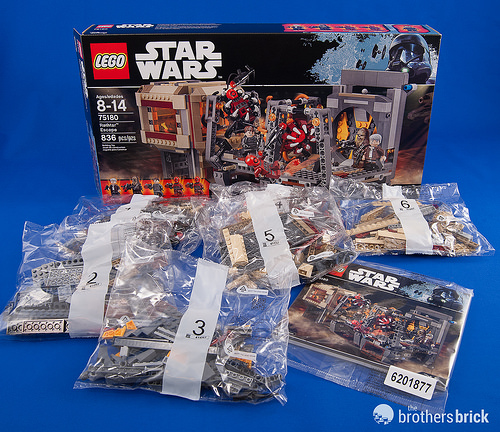 The build begins with the first section of spaceship corridor, along with Han Solo and a black rathtar. The section has a pair of Technic arches, and that’s about it.

The second bag includes Bala-Tik and the parts for the lower half of the second corridor section, which has a Technic mechanism for lifting a minifig through a trap door. The third bag adds another Technic arch, along with a massive bulkhead door you can raise and lower.

The highly detailed, portcullis-like door aside, the build thus far is not particularly inspiring, so the sudden pop of yellow in the fourth bag is welcome amid the dreary (though arguably accurate and realistic) grays and dark tan. In addition to the lower portion of the final corridor section, the fourth bag also includes two Guavian death gang soldiers and a dark red rathtar. 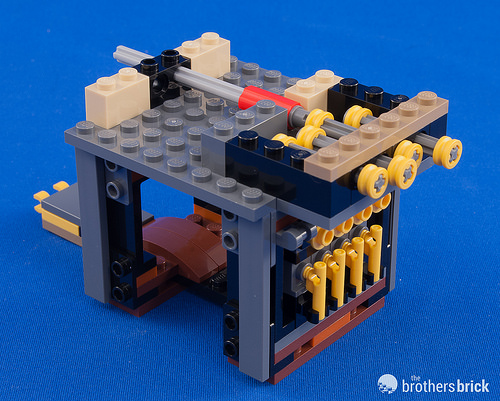 The fifth and sixth bags (the last of which includes Chewbacca) combine to build the rathtar containment unit on top of the relatively small base from bag four. The containment unit has some good studs-out building techniques to achieve nice detail in dark red and dark tan on the structure’s outer walls. The container has its own sliding door, which drops down when you pull the Technic axle built into the section’s base. 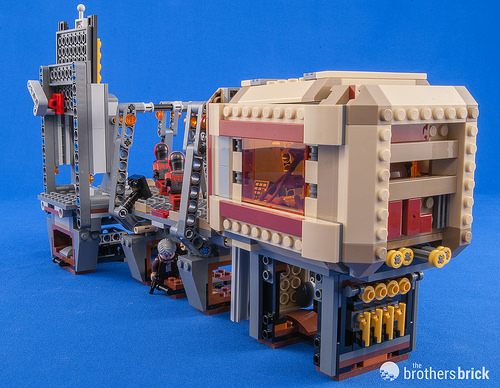 As I mentioned earlier, the set doesn’t include any stickers. The set does include what I believe is a new 2×2 inverted tile with a printed control panel design. Every doorway in the corridor has one of these control panels, so there are four of these in the set. 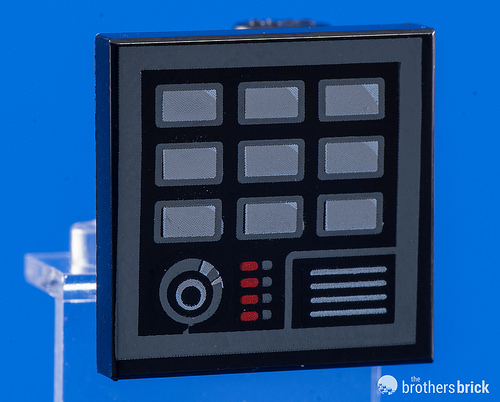 All three sections of the corridor connect together so you can reenact this scene from The Force Awakens. The first section doesn’t include any play features at all, and seems to exist merely to connect the section with the door that slides up and the tan containment unit. 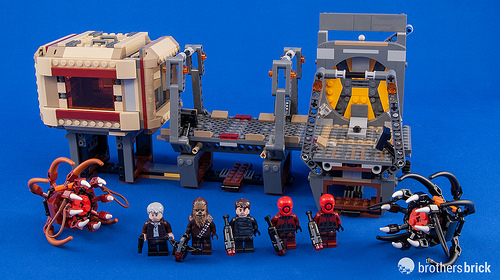 To be fair, there are plenty of play features in the other two sections to keep your inner 9-year-old (or your 9-year-old child) occupied for a few minutes, and the various mechanisms to enable those play features are naturally hidden, and use a fair number of pieces that contribute to the part count. 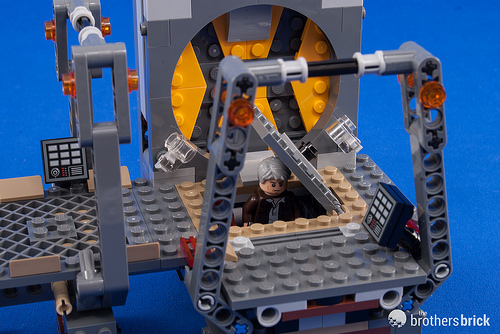 Han Solo can hide beneath the corridor’s floor in a low crawl space, and can fit (sitting down) on a little platform connected to a knob that raises and lowers him through a trapdoor in the corridor’s floor. You can also raise and lower the large door at the end of the same section, and there’s a catch that holds the door up.

The roof of the containment unit lifts off, and one rathtar fits inside. 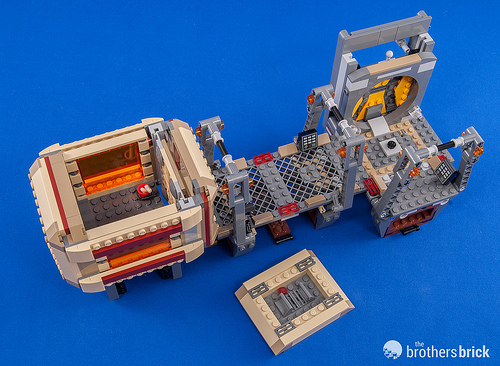 The rathtar isn’t a great fit — you have to fold its tentacles up a bit, but it still can’t fit through the door to pursue the Guavian death gang soldiers. It’s such a poor fit that the roof doesn’t quite fit with a rathtar inside. 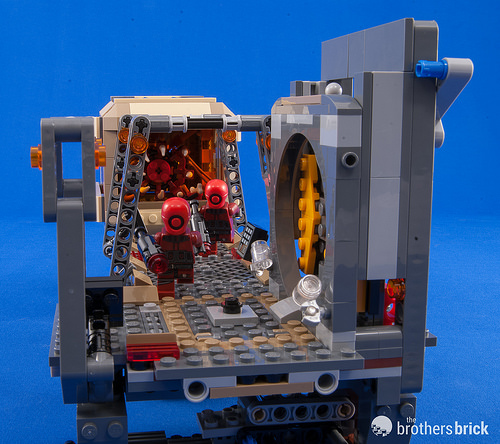 The three sections all include Technic pin connections as well as clip connections, which enable you to combine them in several different configurations. 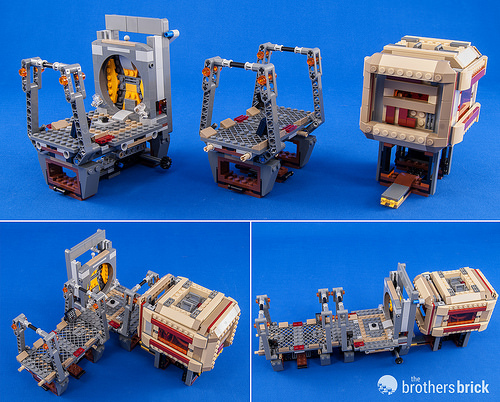 The two rathtars are identical except for color — one black one and the other built from dark red and orange. They each have two sets of tentacles (in front and back), with a pair of “whisker” tentacles on the mouthparts. At around 50 parts each, the pair represents a sizable proportion of the overall part count. 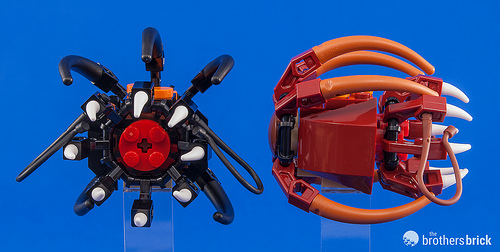 Rathtars remind me of Cthulhu and other Elder Things. LEGO set designers Mark Stafford and Carl Merriam both built custom creations inspired by H.P. Lovecraft before joining the LEGO design team, and it’s hard not to see similarities with their pre-LEGO work (even though I’m not sure which designer created this particular set).

Han gets a new face, but the rest of his minifig is the same as the one in the Millennium Falcon set. Chewie is also the same “new” Chewbacca as the one in half a dozen other recent LEGO sets. Han gets a small blaster, while Chewie gets the new, stud-shooting bowcaster. 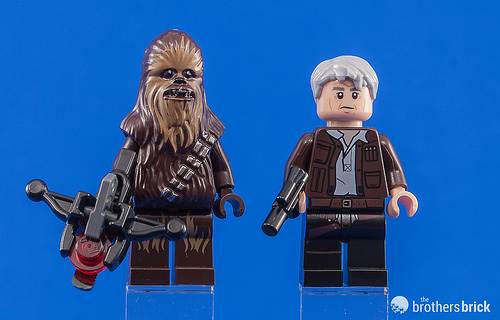 Bala-Tik wears some sort of compressed leather tunic, and is forced to make do with a stud-shooter. Have I mentioned recently how much I hate stud-shooter weapons for minifigs? Yes, yes I have. 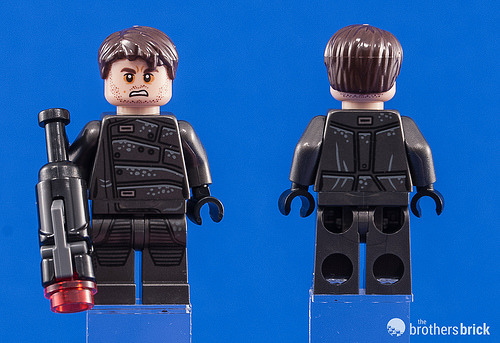 The pair of identical Guavian death gang soldiers are the absolute highlight of this set, with double-molded heads in black and red with matching dark red uniforms. I expect to see these guys show up in plenty of custom sci-fi builds.

With 836 pieces, this is a substantial LEGO set, priced accordingly (and with good value for a LEGO Star Wars set) at $79.99. Perhaps it’s the arches and grill plates that make the whole thing feel less solid, exacerbated by a pair of mid-sized rathtars that subract from the main model’s size, but the final spaceship corridor doesn’t feel like an $80 set. 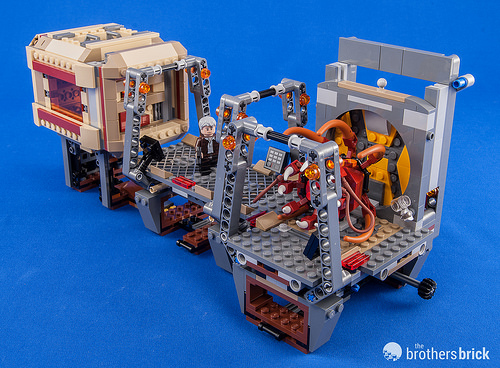 I honestly can’t fault the solid construction, numerous play features, lack of stickers, and appropriate minifig selection — this is a LEGO Star Wars set that ticks off many boxes that indicate a recommendation-worthy set. It’s also a playset rather than a vehicle, which doesn’t appeal to me personally as much as swooshable vehicles do.

The set just isn’t especially exciting to me, so I chalk that up to my personal preference and won’t withhold my recommendation of what is ultimately a perfectly respectable set at a perfectly reasonable price.

75180 Rathtar Escape includes 836 pieces and five minifigs at $79.99. It’s available now from Amazon.com (where it’s a few bucks off right now) and the LEGO Shop online.