Inside the jungle, where few venture, are secrets so hidden they remain forgotten to all but time. Occasionally, through a mix of determination and plain luck, those secrets will reveal themselves. That moment of discovery is caputured brilliantly in this jungle temple scene by master castle builder Jonas Wide. 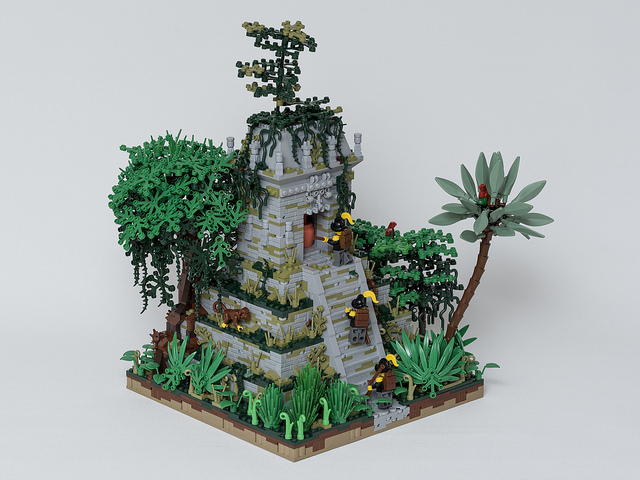 Built for the Brethern of the Brick Seas collaborative role-playing project on Eurobricks, this scene is reminiscent of the discoveries made by conquistadores such as Pedro de Alvarado or Diego Velazquez de Cuellar during those early days of exploration in the New World. One can feel the mix of excitement and trepidation as Jonas’ explorers make their way up the stairs of this forgotten temple. The cautious stance of the lead explorer, musket at the ready, hints that discovery always includes an element of danger. Although the temple’s abandonment is evidenced by its crumbling stonework and jungle overgrowth, there is a sense that these explorers are not alone. Maybe this temple was abandoned on purpose, its secrets never meant to be found. In the blank spaces on earth, perhaps some things are better left undiscovered.