To celebrate the 40th anniversary of the Star Wars saga, LEGO has revealed an exclusive set, Detention Block Rescue, which will be available for purchase by some lucky attendees at the annual Star Wars Celebration next week in Orlando, Florida. 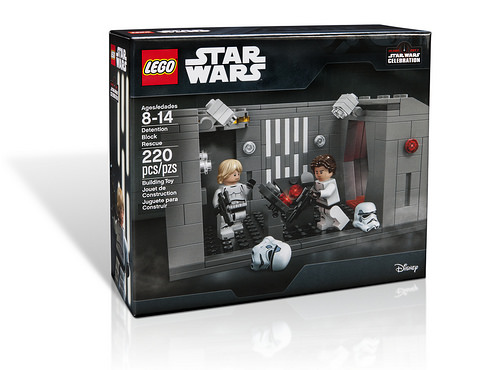 Inspired by the Detention Block AA-23 from the original 1977 film Star Wars: A New Hope, the set contains 220 pieces and includes Luke Skywalker and Han Solo (with newer hair piece) in Stormtrooper disguises, ready to infiltrate the Death Star and rescue Princess Leia. 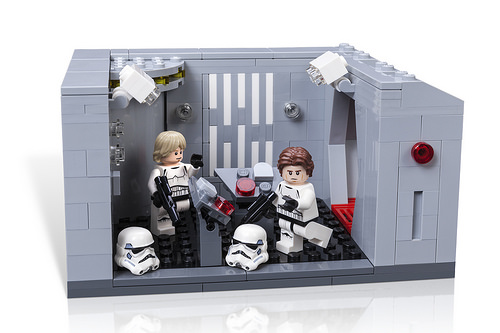 From now through 12:01AM EST on Thursday, April 6th, attendees of the event will have the chance to enter an online raffle for the opportunity to purchase the set at the LEGO Booth (#2630) for $40. Winners will be randomly selected and notified on Friday, April 7th.

Similar in size to the exclusive Escape the Space Slug set given away on May 4th last year, Detention Block Rescue will certainly join the ranks of exclusive and hard-to-get Star Wars sets which are typically limited to events like Comic-Con.

Unfortunately, with set availability being limited, the only other way to build your own Detention Block is to purchase the quintessential 75159 Star Wars Death Star with similar minifigs, security features and hexagonal hallway.

For those of you fortunate enough to be going to this year’s Star Wars Celebration, make sure to check out these other LEGO-related activities happening at the conference:

Have you ever wondered what goes into creating LEGO® Star Wars™ sets, packaging and content? 18 year LEGO veteran, former LEGO Star Wars Senior Art Director and current Brand Manager Rob Johnson from The LEGO Group will take you through the design and development process that brings your favorite LEGO Star Wars construction sets to life. The panel will be a deep dive into the LEGO Star Wars design process, from the conceptual stage to sculpting, prototyping, Lucasfilm approval and finally production, and will then cover the packaging development process. Lastly, the presentation will cover content development and wrap up with a Q&A session where there will be a special prize for the attendee with the best question.

Behind the Scenes with LEGO Star Wars: The Freemaker Adventures

Join executive producers Bill Motz and Bob Roth as they share insights into the making of the Emmy nominated series “LEGO Star Wars: The Freemaker Adventures” and give a sneak peek at what’s to come!

GLFUG is an Adult Fan of LEGO organization. We organize displays at events to demonstrate the creativity of the LEGO brick & elements. It is an honor for GFLUG to once again be a part of the Star Wars Celebration in Orlando. We were present for SWC V & VI back in 2010 and 2012. Come by and see our display, a mixture of sets and original creations.