Anyone who’s ever visited London will be sure to recall the city’s amazing skyline with its mixture of historic buildings and contemporary skyscrapers. Czech builder Milan Vančura has picked two of London’s more unique towers to recreate at 1:650 scale, including this model of 20 Fenchurch Street. 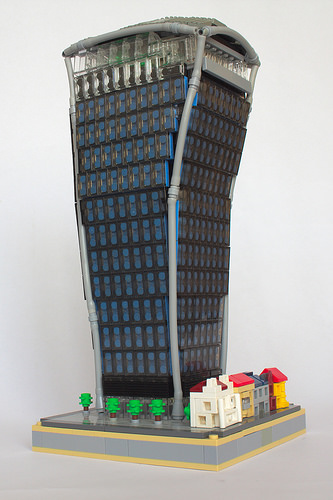 Nicknamed the ‘Walkie Talkie’ for its bulbous shape, 20 Fenchurch Street opened in 2015 with much less fanfare and a whole lot more criticism than its architects had imagined – including concerns about a slight solar glare problem which caused sunlight reflecting off the building to reach temperatures of over 90 degrees Celsius at street-level and melt the paint off parked cars. In fact, you’d be hard pressed to find a city resident who would describe the building as anything other than bloated and inelegant. Nevertheless, the LEGO builder has done a fantastic job recreating the Walkie Talkie’s distinctive design in LEGO form, even including the sky garden which occupies the building’s top floors.

Milan also built one of London’s more eye-catching (and much less controversial) skyscrapers, the Gherkin located at 30 St. Mary Axe. 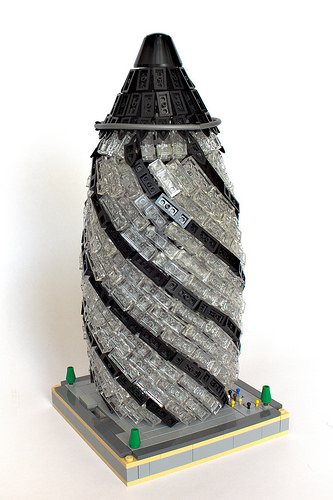 The builder does a nice job using 1×2 plates to capture the swirling architecture of the Gherkin. Impressively, the LEGO model is completely hollow with only a central pillar and several horizontal beams to support the structure. Milan tells us both models are part of a project to build a microcity exhibit by Czech LUG Kostky. We’ll certainly be keeping an eye out for more great additions and for the entire exhibit once it’s finished.