This retro computer work station by Ryan is a real blast from the past considering how far technology has come since those early and wild days of personal computers. This particular model is the Macintosh 128k – originally released as the Apple Macintosh – the company’s original personal computer. With some 4,500 bricks in its construction, this LEGO recreation must be as hefty as the real thing. But don’t let the computer steal the show, however. The 80s vibe is enhanced by the addition of a rolodex and clunky calculator which, alongside the 128k, won’t be found on any work station in the 21st Century – today’s bargain-level smartphone can do all this and so much more. 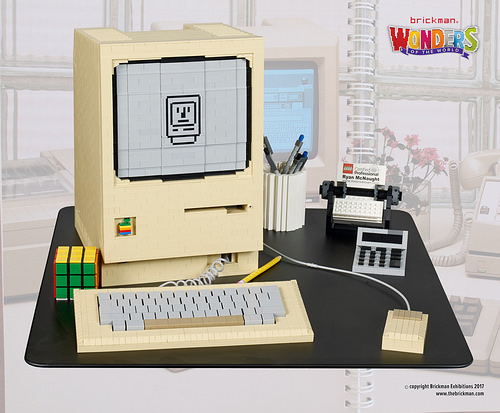 For younger readers who don’t remember such things, the slot on the front of the computer accepts 3.5-inch floppy disks (which, according to the U.S. Government Accountability Office, are still used to coordinate the operational functions of the nation’s nuclear forces. Doesn’t that make you feel comfortable?). The Apple logo and the friendly icon on the warming-up screen are great touches as well. Overall, a very accurate and rather nostalgic take on the 80s workdesk. The only thing missing is a can of Tab and the sweet, soothing sounds of Duran Duran.

1 comment on “Paving the future of personal computers, 128 kilobytes at a time”