Here at The Brothers Brick, we tend to specialize in certain kinds of news, LEGO creations, and reviews, but thanks to our partnerships with other LEGO websites, we’re able to bring you more kinds of content. Please enjoy this excellent interview that originally appeared on New Elementary.

To conclude our farewell to LEGO® BIONICLE® “Generation 2”, we have an interview with three members of the team. This was actually recorded prior to the announcement that the theme would be ending, but of course these guys continue to make Constraction figures with The LEGO Group, so whilst BIONICLE is dead (or perhaps merely dormant), the elements live on! 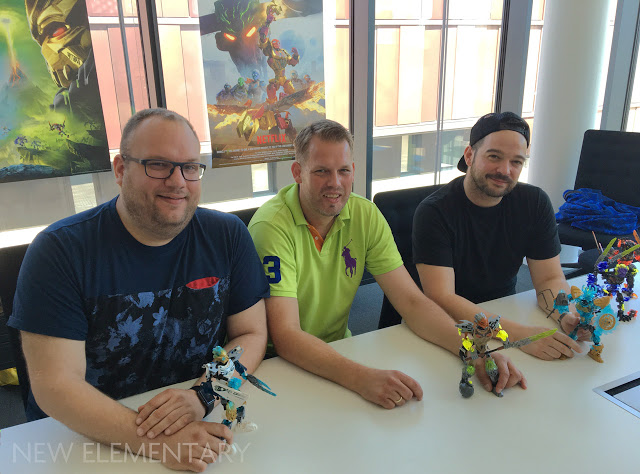 Christian Vonsild is in charge of the process of developing the new elements required and has been a designer on the Constraction team for four years. Steen Lindeberg is the marketing lead in charge of communication and was also a key part of the story team. Cerim Manovi is the creative lead as well as being a member of the story team. He joined the company just as work on the Hero Factory theme was beginning nine years ago. Later, he helped develop the Character and Creature Building System (CCBS), the formalised building system for Constraction models that was introduced in 2011. 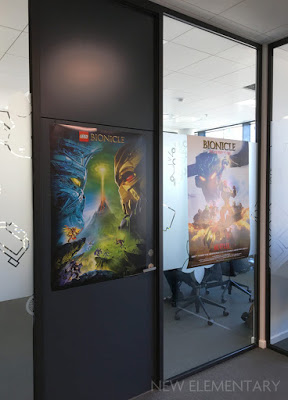 New Elementary: How is BIONICLE Generation 2 special and different compared to other Constraction themes?

Cerim: When we started BIONICLE again, of course we very much had Generation 1 in mind. The biggest starting point in terms of the elements was of course the masks. There was heritage around that, so that is something that we wanted to respect. The other starting point was the functional implementation of elements, and that was the biggest difference. We thought, “how can we cleverly design parts that will actually make a function in the sets?” We really wanted to live up to the expectation so that they were not just stiff figures (which are also cool, and become more about the styling) but to actually create elements that perform a function. Thatís where we started, and of course we can now implement it into different lines as well. When we worked on Hero Factory it was more a case of designing the model first, and with shooting functions, whereas with BIONICLE, we really had the focus on battle functions or transformation functions in mind.

New Elementary: So the new elements are not gimmicks, for the sake of some fun play functions?

Cerim: When you are designing an element, it really has to have meaning, and be recognisable for the kids. I think this is the journey of our development: to be even more aware of why we did the things we did. Was it because it was cool, or was there reasoning around it? How can we build on top of this going forward?

New Elementary: Is it true to say that the process which you now adhere to was created by BIONICLE, to a certain degree? It has been suggested that Generation 1 played a part in saving The LEGO Group in the 2000s, because the faster development processes for the sets and new parts taught the company different ways of working.

Cerim: We always think about life cycle when we are implementing a new element – is this an element that is just for this year, can it last longer or is this actually an element that could be used forever? That has an impact on the usage of it, and just how unique it will be. And if you are thinking about creating an element that is more System-based and generic, then of course it is a much bigger deal.

Christian: All the elements we make have to fit into the LEGO grid, because if we do a sword for BIONICLE, the next year it may be used in LEGO® NEXO KNIGHTS™ or whatever, so everything has to fit together.

Cerim: The thing is, the CCBS is based on the Technic System and so all of the measurements are based on that. There is just a slight difference between Technic and regular System, so of course we are always checking the unique measurements around this. We also have things like the ball and cup pieces, although of course you have that in System as well. That gives us as designers, and also the fans, the possibility to combine the Systems. But the basis is always around the Technic grid and measurements. 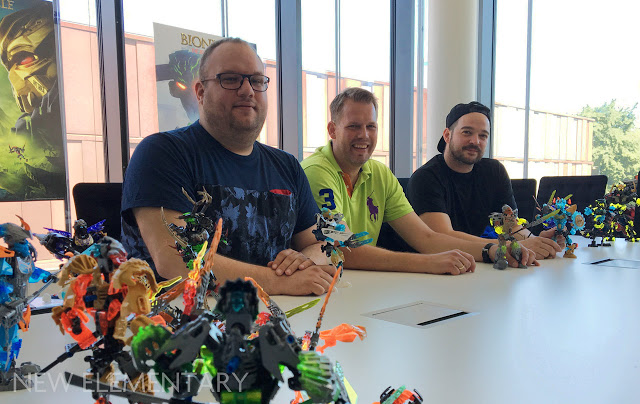 New Elementary: Are story, elements and design more streamlined on BIONICLE than on other LEGO themes?

Cerim: I think they are, because we have a certain amount of new elements we can do per year and of course we need to make sure that the elements we are implementing are theme-based. This is the difference for us because of course it is all based on the System, so the more we can share among us the better it is. But still, on BIONICLE you see all the masks for instance; they are special elements for the characters and of course it is story-driven in that sense, and theme driven. Then you have the shells that give them this unique look, but also different shades lend themselves towards other themes like the LEGO® Star Wars™ Constraction lines. It’s really amazing.

Steen: Generally we run more or less the same process across all the different teams, because it has to fit into the big machinery of everything else. Therefore, we have a process that we all run with, but of course there are some differences. I think we share a lot more in common with NEXO KNIGHTS, because they are also a story-driven and IP-driven universe; they need to fit together like we need to fit together. Whereas a theme like Creator has some other things to consider; maybe itís not a story that plays a part but a reference to something which needs to be considered.

New Elementary: Some AFOLs are quite fast to point out that they don’t like Constraction! What do you think are the advantages of CCBS over the regular LEGO System?

Steen: Basically, from a kidís point of view, the building experience is pretty much the same: it is still a creative process where you have a system that is used to build with. Of course CCBS is more optimised for creatures and figures, and is also a bit sturdier because the product is an action figure that a kid will play rough-and-tough with, whereas the System is more for making things like buildings, vehicles and so on. You can see in some of our System builds that we have started incorporating some more CCBS elements where it has advantages over some of the bricks we have in the System.

Cerim: CCBS is not better or worse than System, it’s additional. It has the same foundation but is a different type of building experience; itís a bit faster and a bit sturdier because of what you are building. We see a lot of kids and fans that are more willing to rebuild stuff, especially the kids. You put a lot of time into building a big brick set which has a large price point — you can build it for days and days — in that sense, because we have a fast experience with CCBS, if you want to change something, you are more likely to change it. 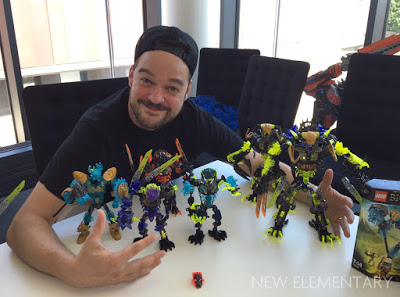 Christian: When they build the System stuff they just build; they are totally focused on that and they love it. Some of them build it as a ëtrophyí and the others build and then half an hour later itís taken apart, they rebuild it and it is totally different. When I give kids BIONICLE, itís like instant gratification. You pop on a head, and you don’t even need an arm, you already have a figure you can play with and run around with, especially some of the smaller kids. If we go lower than the recommended age on the box they may have a bit of difficulty building it but as soon as they get it, itís very intuitive and fast to build.

New Elementary: How would you describe the differences between CCBS and what Constraction elements were like before CCBS?

Cerim: In the past, elements were very much fitted to the theme. When we designed CCBS, we designed a System. We worked on a lot of concepts, for example: how could we make a foundation element so we could build in every direction? The first one was in Hero Factory, and from there we used the same foundation in Legends of Chima figures, LEGO Super Heroes, LEGO Star Wars™ and then BIONICLE, so it is really the thought of creating something which is more in line and structured; a System of Play.

Steen: If you see the progression we have had since the very first Slizers, RoboRiders and BIONICLE Generation 1, I think we have learned a lot. The way they were put together was liked by many fans, but it wasn’t a System at the time. When we introduced CCBS it opened up a huge number of possibilities, not just for ourselves but also for fans. The fact that it is a System today allows you to put together whatever you have in your parts bin in a lot more ways than you could with the old BIONICLE sets. Also, if you want to compare those early sets to the ones we have today, just take a look at the piece count. Because it is now a System and not just new elements for each model for each year, we are able to put a lot more build and play experience into the product than what we could do in the early days, because we can put more parts in as we re-use parts from previous years.

Cerim: Also, you can then steer it more towards the target group you are aiming for. Is it the six-plus age mark you are doing? If so, you design the set just with CCBS but if it is an older target group, you can start mixing in some more Technic elements, which is a different and maybe more challenging build experience.

New Elementary: What unique challenges present themselves when you design the more challenging models for Constraction themes? Do the Technic team get involved?

Cerim: It is collaboration. We really utilise each other’s competencies. We invite other people, have a brief and then we build with them. 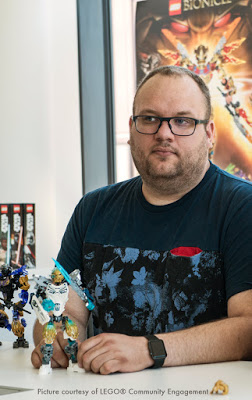 Christian: Or it could be internally, in the team. We are all in charge of a model but that doesn’t mean we canít give input on others. Sometimes you run into a problem where you canít solve it and you have your mindset focusing on something, so you ask someone else. They look at it from a different perspective and take it on a totally different direction. Itís more or less just asking around.

Thanks to Tim and Scott for the great interview. Let us know in the comments if you like guest posts like this, and we’ll try to do more!