A freewheeler is a three-wheeler motorised trike, typically with a large engine capacity. Ian Ying‘s creation of this road beast was inspired by a Honda Boom Trike Shadow 750, for you bike lovers out there. It took Ian around 20 hours spread over 3 days to build this lean mean machine. Considering Ian only got into the world of LEGO a year ago, the results are astounding. 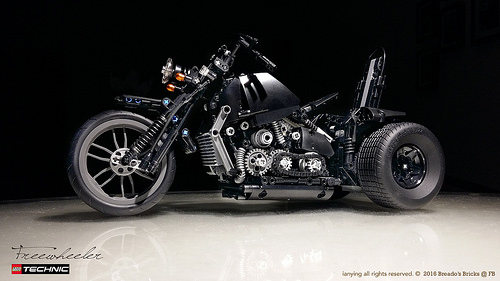 Some creations are not so much a matter of inspiration, as they are passion. Ian built this from scratch with a vision in his mind and elements strewn across his desk. Being a rider himself you can see the amount of detail going into the body to give it a sense of bulk and weight. One of his tricks was to use more non-Technic parts to create a better sense of realism.

Sharp-eyed readers might also have spotted that those rear tires are the ones that appeared in the 2014 set 76023 Batman Tumbler, and more recently in the new 42050 Drag Racer. It looks these huge tyres are giving our creative folks out there more to explore with!