Of all the jokes and memes that came and went in 2016, none was as long-lasting and popular as “We Are Number One”. If you’re unfamiliar with it, I’ll let the experts explain it properly, but essentially it involves a song from the children’s TV show Lazy Town being endlessly remixed and fiddled with and then retitled “We Are Number One but [some weird change to the video]“. However, teen builder A Plastic Infinity‘s interpretation involves recreating four characters from the song (Robbie Rotten and his clones) as LEGO figures: 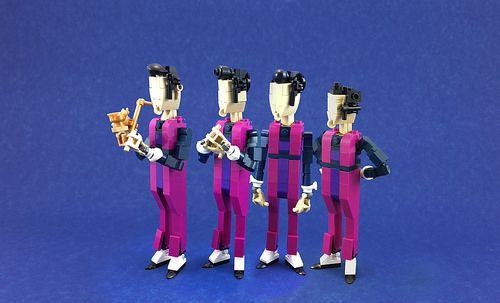 Take note of the quaffed hair which is built differently for each figure, as well Mr Rotten’s characteristic huge chin, cleverly captured using just one half of a ‘hinged plate’ assembly.

One great thing to come from the whole joke, aside from this cool LEGO build, is that the actor who played Robbie Rotten (Stefán Karl Stefánsson) was suffering from cancer around the time the meme hit fever pitch. The attention it brought to the character resulted in him and his family being able to raise a lot of the money they needed via GoFundMe. Good job, Internet!