Following our review of 70906 The Joker Notorious Lowrider yesterday, our stream of reviews of LEGO Batman sets from the forthcoming The LEGO Batman Movie continues with 70905 The Batmobile, available now. 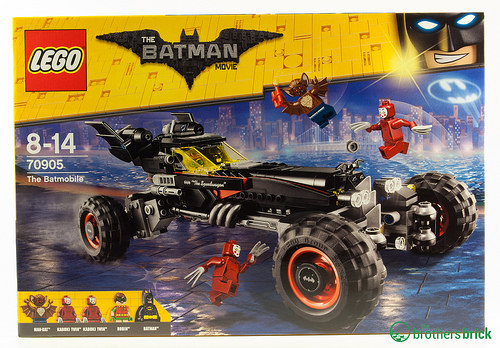 The set includes 581 pieces and 5 minifigs, and retails for $59.99. Find out what we think in our in-depth review.

The build spans 245 steps across two large instruction booklets, with the parts in 5 numbered bags. You guessed it, each bag contains one of the five minifigs. Compared to Joker’s lowrider, the Batmobile is a rather complicated build, full of Technic understructures and multiple sub-assemblies connected to brackets for some significant studs-out SNOT. 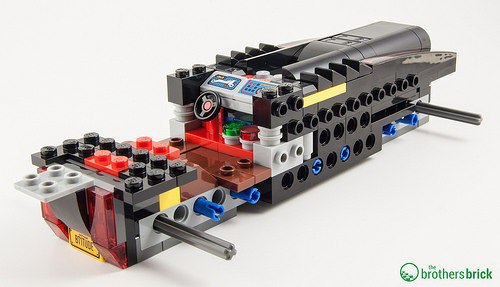 The body of the Batmobile is full of long curves and wedges, attached to the underlying structure with brackets. Stickers are applied liberally throughout the build, though I think the final model would work fine without them. 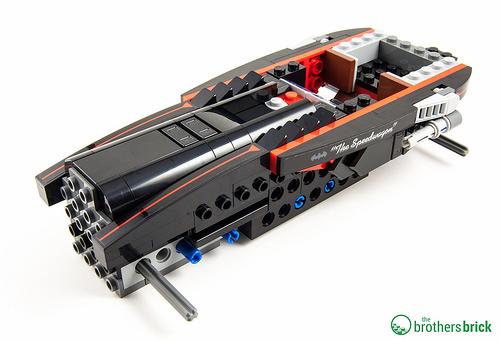 The four wheel assemblies toward the end of the build do get a little repetitive, but they’re small enough that that’s not really much of an issue, and they have some interesting Technic connections to extend the wheels out from their suspension assemblies.

Black models don’t photograph particularly well even on official LEGO set boxes, and the box doesn’t really do this set justice. With those curves and soft angles, this Batmobile has a truly retro Gotham vibe with that distinctive bit of art nouveau flair. 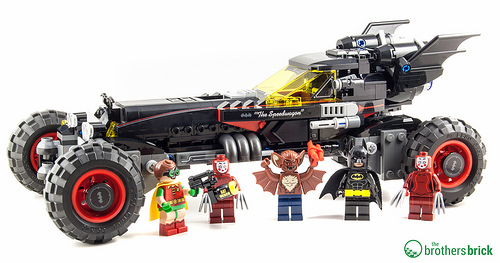 The Batmobile seats two comfortably, though I expect Batman always takes the wheel. Corner panels next to the stud-shooters behind the cockpit add some interesting texture. 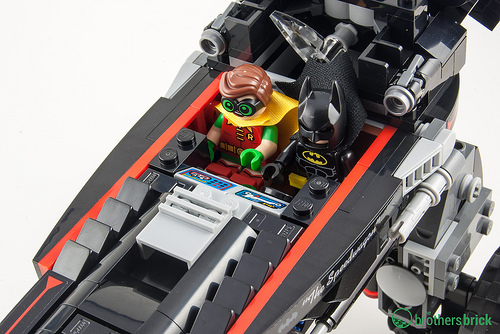 What makes this Batmobile remarkable is the “variable geometry” wheels, which swing out so the Batmobile can drive sideways… 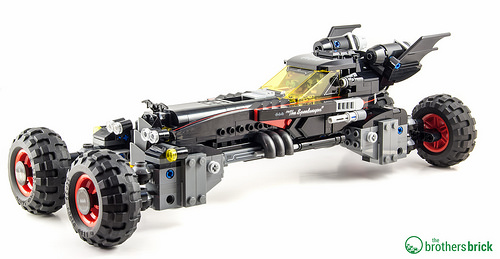 …while the whole suspension assemblies click up and down so the low-riding Batmobile can transform into a monster truck. 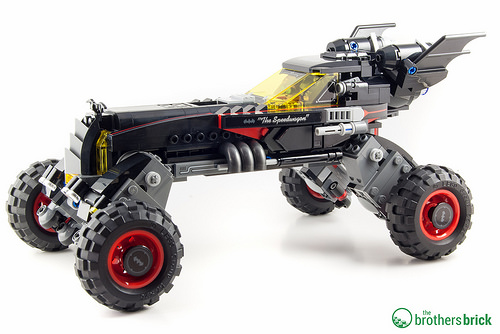 Of course, each wheel clicks up and down independently, so you can configure them to create several different looks for the vehicle. 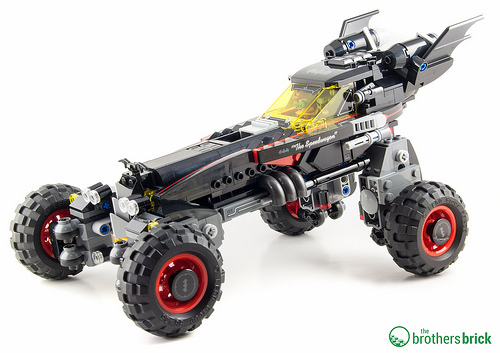 One of my favorite details is the front grill, which looks a bit like the spine of a dinosaur, built from layered roof bricks. And of course, there are certainly plenty of lights to illuminate the Gotham night. 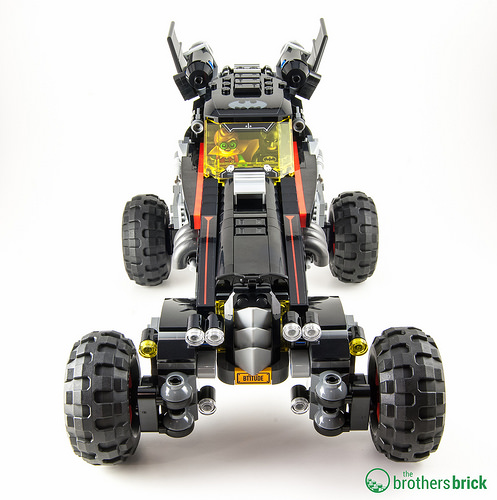 The rear has the standard bat-wings, with a cool trans-purple piece on the tail of the jet engine. 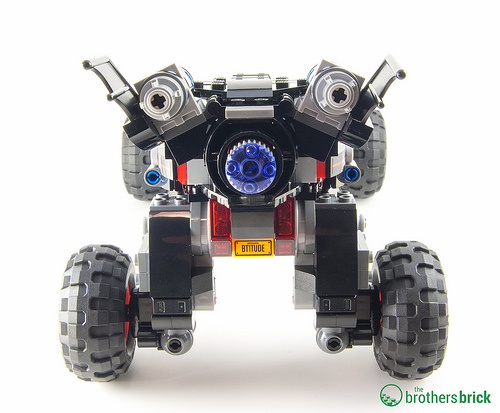 The Batmobile set would certainly be incomplete without Batman, and the set does not disappoint. Also included are Robin, Man-Bat, and the Kabuki Twins.

Batman and Robin both have alternate expressions, and Robin is equipped with what I can only assume is a T-shirt cannon labeled “Bat Merch”. I assume it shoots branded Batman merchandise. Both the round “Bat Merch” brick and the 1×1 round plate with the Batman logo are printed rather than stickered (and there’s an extra yellow 1×1 plate, of course). Robin’s “Boy Wonder” look is entertaining, and I’m looking forward to seeing him in action in the movie. His googly eyes glasses are attached to his hairpiece. 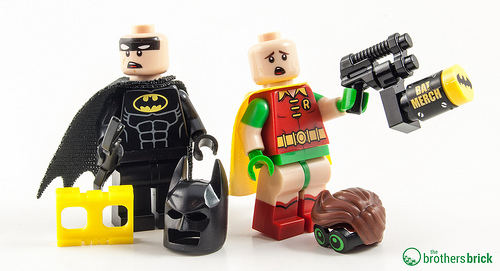 I know nothing about Man-Bat. I assume he’s a bat who was bitten by a man? Or something? Anyway, this minifigure is similar to previous LEGO incarnations of the character. The Kabuki Twins are apparently Penguin’s bodyguards, and the two minifigures are identical. They have Wolverine claws, proving that some parts originally created exclusively for one licensed theme can show up in another. 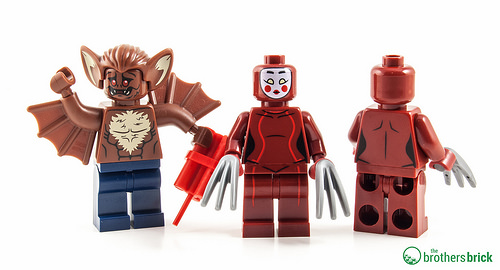 The set is actually full of interesting and relatively new parts, including half-round 1×1 plates, new “macaroni” pieces in gun-metal gray, 2×2 wedge plates, and more. The most obvious new pieces are the two bat-wings that decorate the end of the Batmobile.

The 2×2 wedge plates come in dark bluish gray, and LEGO continues to release gold ingot pieces in new colors, used liberally on the Batmobile in places where a 1×2 tile might have taken its place previously. 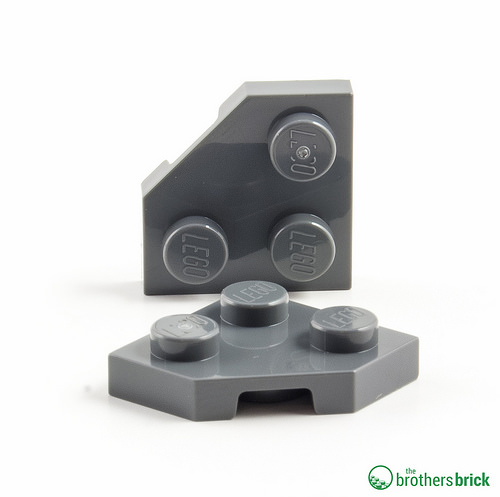 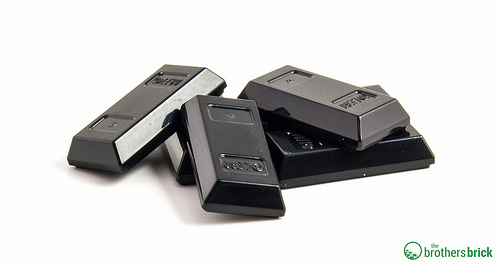 Don’t let the thin-looking black vehicle on the box fool you — this is a substantial, interesting set with some really fun play features, solid minifigs, and a surprisingly diverse selection of parts. And for sixty bucks you get 581 pieces and five figs, so it’s actually a decent deal for a LEGO set in a licensed theme.

I’m personally not a huge DC Universe fan, nor much of a fan of Batman except perhaps in his Frank Millar and Christopher Nolan incarnations, so neither the theme nor the characters are what make this a fun set for me — it’s the actual build, the finished model, and the parts selection. Those are great reasons to buy a LEGO set, rather than to pick up another Batman, so I’m definitely recommending this set for Batman fans and non-fans alike.

70905 The Batmobile is now available from Amazon.com and LEGO.com.