When I reviewed The LEGO Movie nearly three years ago, I wrote, “Forget Ben Affleck, I want Will Arnett as the next Batman.” With The LEGO Batman Movie hitting theaters on February 10, 2017, I’ll finally be getting my wish. Our friends at LEGO HQ sent us all of the new LEGO Batman sets, and we’ll be bringing you reviews of as many as we can over the coming days. Several of the sets have already hit stores ahead of the holidays, so we’ll start with those. 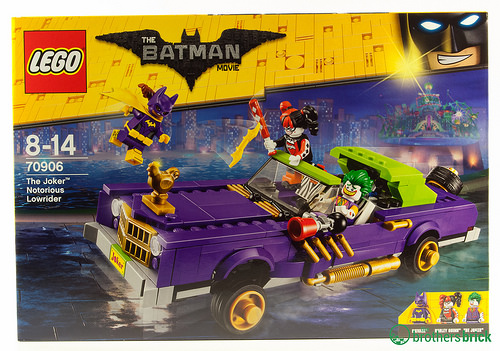 While it remains to be seen whether Joker’s Lowrider will ultimately be considered “notorious,” read our full review for our thoughts on this new set.

The Joker’s big purple lowrider comes in three numbered bags, with one of the minifigs in each bag. The instructions come in two booklets, spanning 113 steps. I’ll be honest: With mostly stacked plates and bricks that add up to a large purple sedan, this isn’t a particularly inspired build.

What little SNOT there is in the build is in all the usual places common even in LEGO City vehicles these days — outward facing tiles for the sides of the car and the front and rear fenders.

There’s some oddly complicated Technic assemblies underneath the chassis, connected with rubber bands, but I’ll cover those when I describe the play features in the finished model. 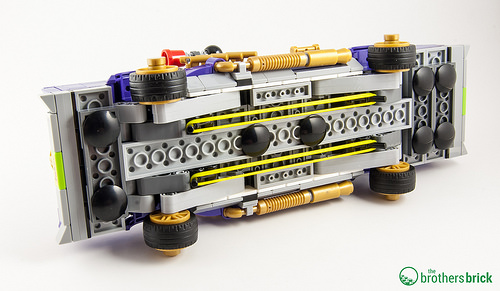 It’s square. Really, really square. And huge for minifig-scale. But pimpmobiles — and let’s be honest, this is no less a pimpmobile than the Lunar Limo from the Space Police theme in 2010 — are often built on the enormous, boat-like American sedans of the 70’s and 80’s, so huge and square are what we should expect, I guess. 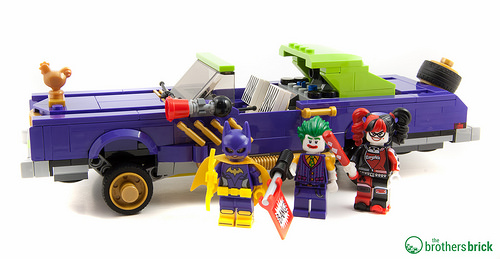 So if we accept that the Joker is driving around Gotham in a purple pimpmobile — after all, it’s even a dead ringer for Austin Powers’ “SWNGR 3” from Goldmember, down to the gold grille and angled pipes along the sides — then the Joker’s lowrider is kinda sorta awesome.

Behold, zebra-printed seats and a sound system to quake your grandma in her easy chair. 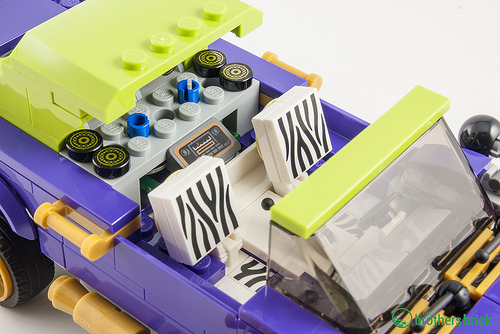 The blue Technic pins activate a pair of flick-fire missiles hidden in the trunk. 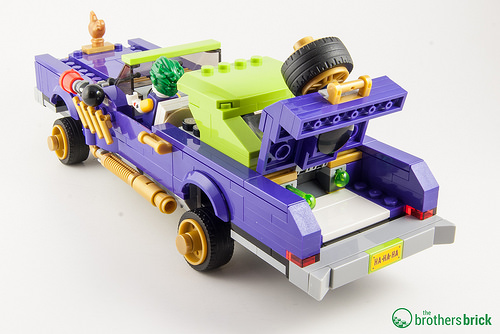 Those oddly complicated Technic assemblies connected by rubber bands underneath the lowrider create a bouncy ride for passengers, with independent suspension for each wheel. Personally, I would have preferred some type of mechanism to raise and lower the car, mimicking the hydraulics of real-life lowriders. 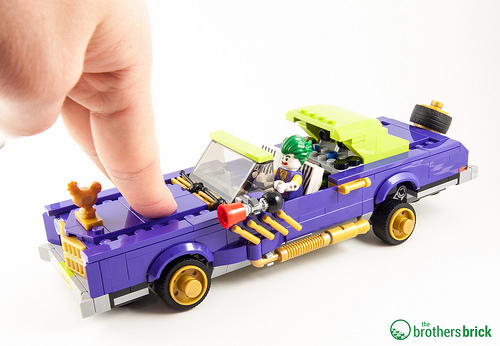 Let’s all admit that many of us buy LEGO Superheroes sets for the superhero minifigs. So without further ado, I give you Batgirl, Harley Quinn, and the Joker himself. All three are unique to The LEGO Batman Movie line of LEGO sets, and are different from previous minifig incarnations of the same characters. 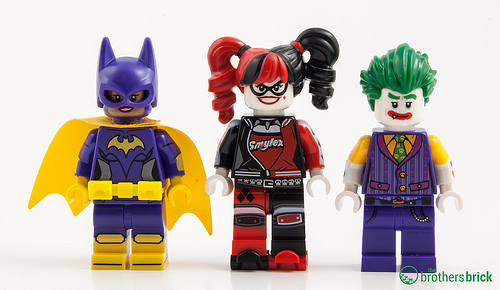 The Joker wears a natty purple suit to match his sweet ride, with wild green hair, an adorable snaggle tooth, and — perhaps a first for an official LEGO minifig — what appears to be some ink on his forearms. 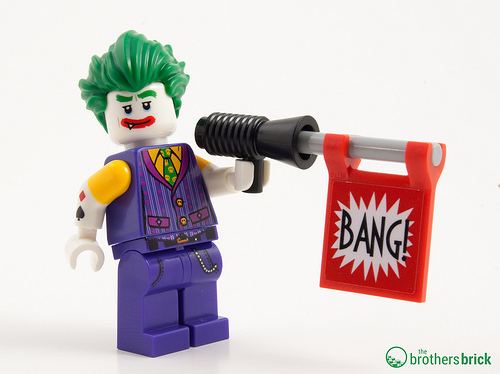 All of the minifigs are printed on both front and back with reversible faces showing two expressions. The Joker has a cheesy, “Who me?” grin in addition to his snaggle-tooth look. 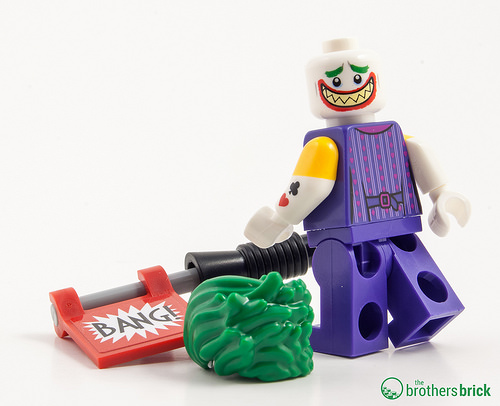 Harley Quinn wears her usual red and black checkered outfit with skulls on her belt and a Smylex T-shirt under her jacket. She flits about on roller skates, presumably whacking things with her printed baseball bat. (The set includes an extra red and black roller skate each so you have two complete pairs in each color.) 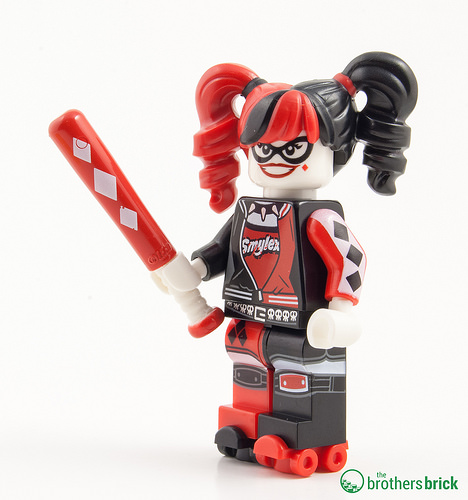 For her alternate face, Harley Quinn has a quizzical look, or perhaps it’s just nonplussed. 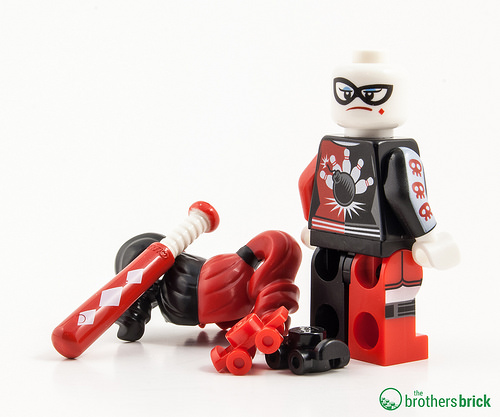 Batgirl wears purple as well, with a utility belt and cape. Most noteworthy about her outfit is that she has a separate ponytail piece that attaches to the back of her cowl via a standard bar connection. 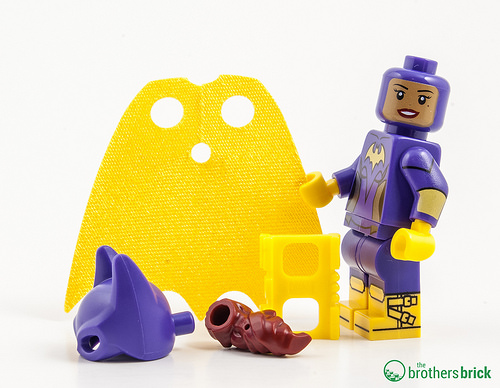 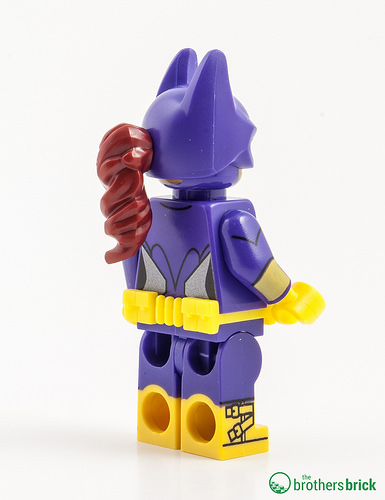 Her alternate expression is angry, perhaps because she’s been accused of being associated with the Joker in his purple pimpmobile. 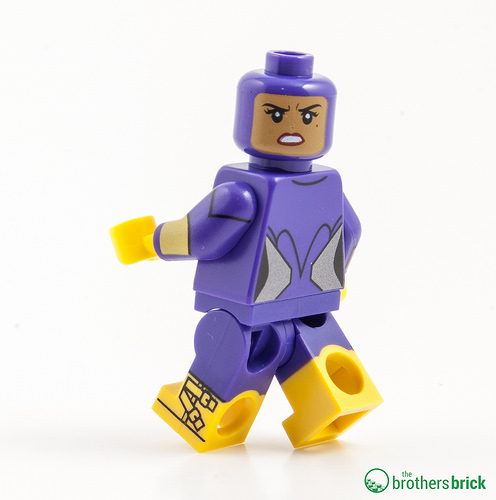 There aren’t any completely new parts in this set, though several appear in new colors, such as the pearl-gold chicken. Most notable are several new printed parts — two zebra-printed tiles (1×2 and 2×2) I noted earlier, and a set of tweeters for the sound system (4 1×2 round speaker tiles for the set, with one extra). 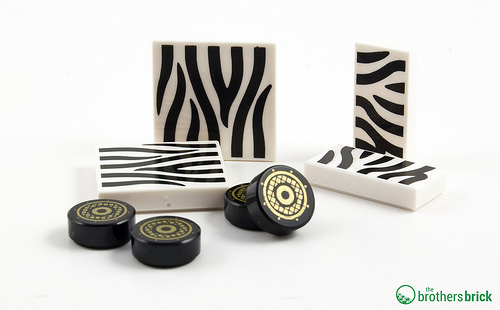 As it’s sat here next to me over the past couple of days, Joker’s lowrider has slowly grown on me. Yes, it’s overly large and very square, built from fairly basic building techniques. At $49.99 for 433 pieces, I’d be hard-pressed to recommend this set at full price, or as your only LEGO Batman purchase. But with three fun — and probably collectible — minifigs and a big bunch of purple and pearl-gold pieces, it’s not half bad. That’s no ringing endorsement, but the set is certainly worth consideration for the minifigs and the purple. All that purple… 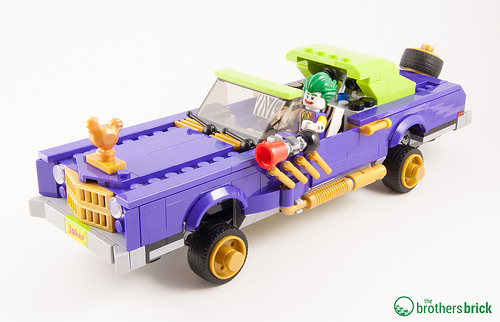 70906 The Joker Notorious Lowrider is now available from Amazon.com and LEGO.com.