Blocks magazine Issue 26 is already on the coffee tables of subscribers and goes on-sale today at all fine magazine emporiums. To celebrate the return to the wizarding world of Harry Potter as Fantastic Beasts and Where to Find Them hits cinema screens, Blocks indulges in a trip down memory lane to re-visit every LEGO version of Hogwarts Castle ever released – and combine them into one mega display. In the LEGO Book of Harry Potter, some of the finest LEGO fan builders around work their magic on representing each tale in a series of exclusive vignettes. 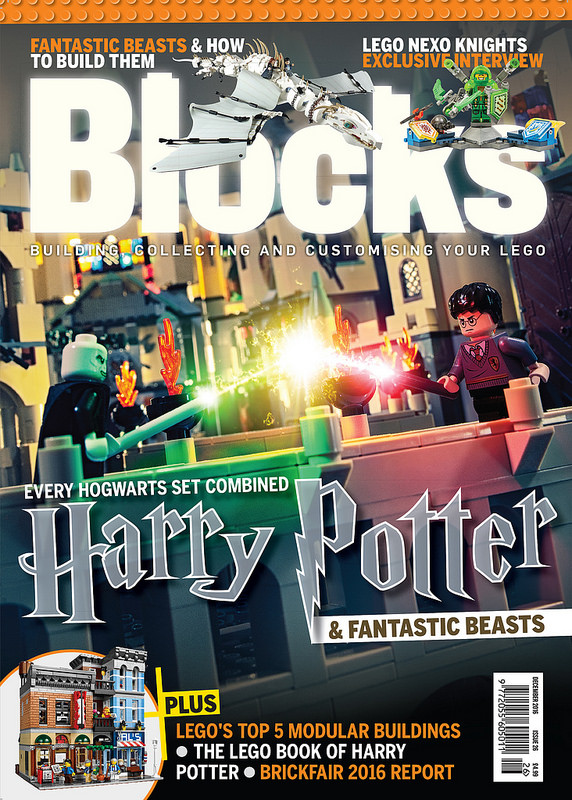 LEGO Dimensions producer Mark Warburton talks about bringing the new movie Fantastic Beasts and Where to Find Them into the gaming multiverse. In “Fantastic Beasts and How to Build Them”, Blocks presents another impressive selection of bespoke LEGO builds, inspired by the various creatures documented by Newt Scamander.

Elsewhere in this issue, LEGO designer Samuel Johnson talks about working on the Ultimate NEXO KNIGHTS range and developing this app-linked theme. The Mod Squad take on CITY and NEXO KNIGHTS volcano sets, to show just what can be achieved when bringing two sets together. The interior design lessons continue in Technique. LEGO Dimensions packs get scrutinised in Review. And there’s a look back at BrickFair Virginia in Month in LEGO.