As something of a Disney geek, I was delighted to get the opportunity to review the new LEGO Disney Cinderella Castle set. However, I have to admit I was somewhat taken aback when the box arrived and I began to realise what an undertaking the build process was going to be… 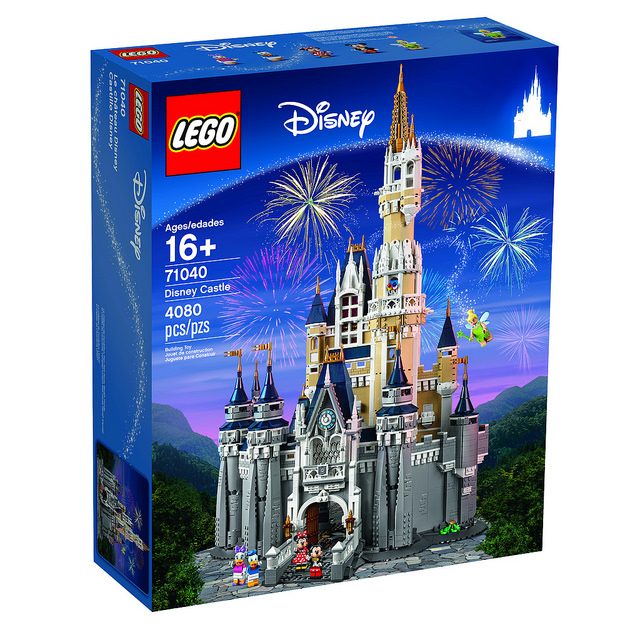 The enormous box contains a huge amount of LEGO pieces — no fewer than 27 numbered bags — plus a hefty 490-page instruction manual. When you tip it all out on the floor you begin to understand why this set is as pricey as it is, and how big it’s going to end up. 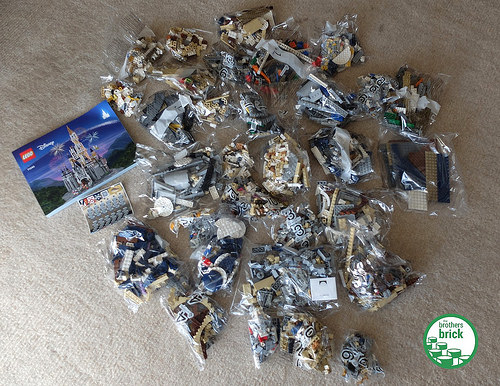 Whilst this is unambiguously communicated as a complex 16+ set, I’d imagine it will be purchased by many adult Disney fans who may not have built with LEGO for some time. They’re going to be surprised at the complexity and ingenuity of some of the techniques used. Further, the subject matter will no doubt encourage a bunch of parents to buy this for their kids to play with. Whilst it’s a brilliant set, and the build is fun, it does take a VERY long time. I pity the poor dads who start building this for their impatient princes and princesses on Christmas morning — with luck they may be finished sometime on Boxing Day!

The instruction manual is a big beast. It has two pages outlining the history and attributes of the real Cinderella Castle in Walt Disney World’s Magic Kingdom. These are followed by a double-page spread which highlights some of the set’s “Easter Egg” features — scenes or props taken from a range of classic Disney movies. The rest of this weighty tome is dedicated to the 758 steps it’ll take to complete the construction process.

I couldn’t resist comparing the outline of the model with some Disneyworld technical information and concept artwork. This comparison gives an idea of how close to the genuine article the set turns out — pretty close, although the model’s open back means you miss a couple of the taller towers which sprout from the rear of the real castle’s central keep. 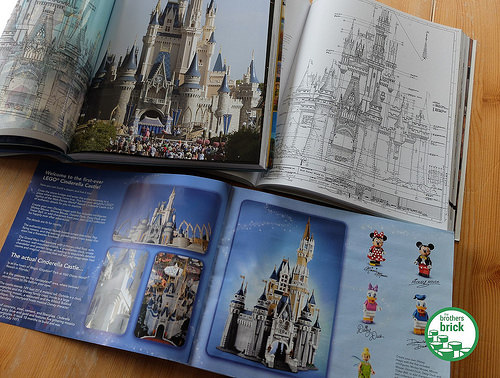 The Build Process
As you’d expect, it all begins with the base — a sturdy Technic frame reinforced with larger plates. There’s good color differentiation between the bricks used, so even less experienced builders won’t get lost or make an early mistake. 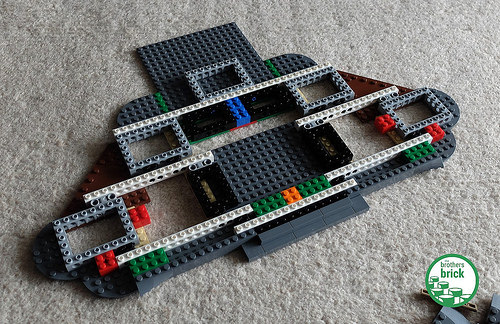 After a solid hour of work the base is complete. Although this wouldn’t appear the most exciting phase of construction, I was never bored, and particularly enjoyed putting the mosaic floor together. Rotated by 45 degrees, it’s an interesting section, and the technique might come as a surprise to people who haven’t bought a LEGO set for a while. 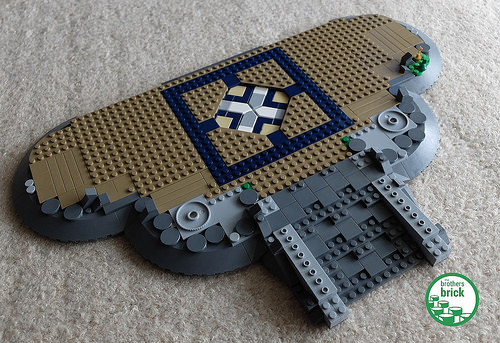 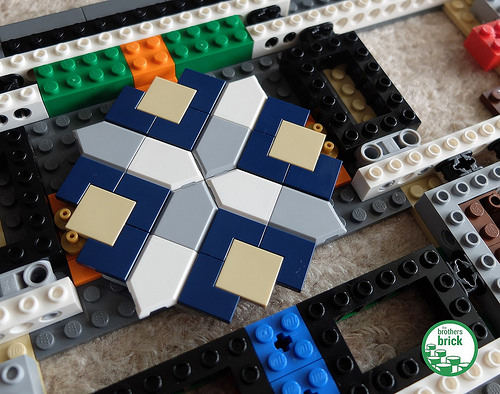 Similarly, there are some basic SNOT (Studs-Not-On-Top) techniques introduced during the next phase. Again, perhaps nothing new to the experienced adult LEGO fan, but likely a revelation to less experienced builders. 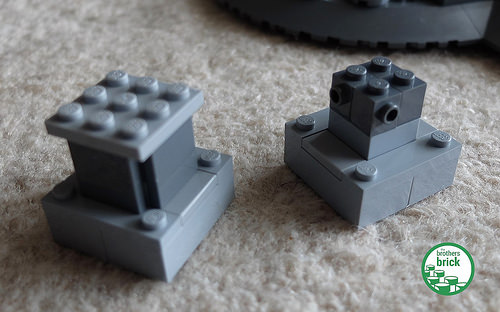 There are some “off-the-grid” curves created as you put together the castle’s ground floor. The combination of hinged pillars and arches is smartly done, and combines with some clever brickwork around the front to make for an interesting building experience. 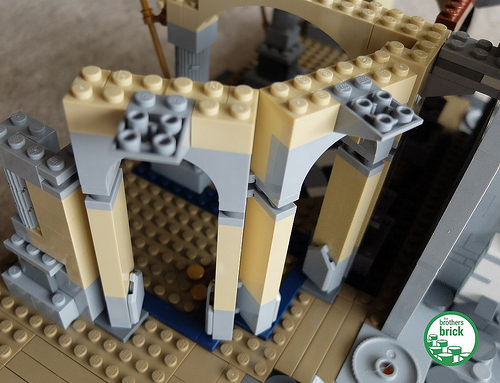 By this point, you’re about two hours into construction and things are beginning to come together nicely… 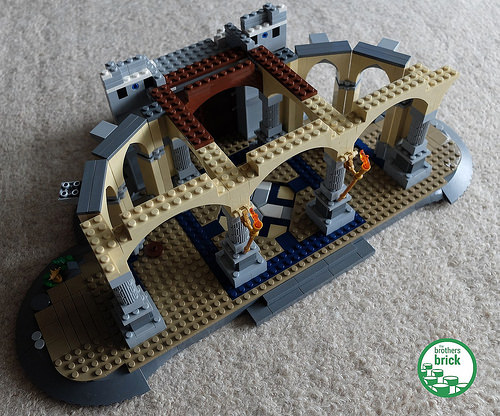 Before you get started on the external walls, you get to build a couple of cool details — the grandfather clock, and the brilliant little lanterns by the front gates. 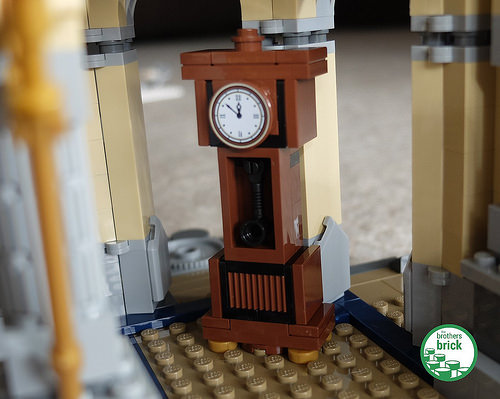 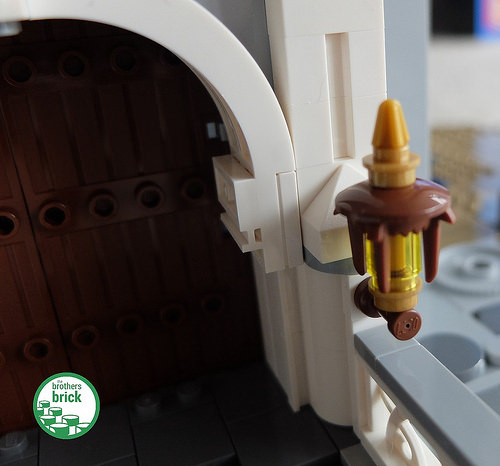 The process of putting together the big exterior wall is relatively simple, although the angled connection attaching the towers to the central gatehouse is clever and worth tucking away in the techniques box for personal use.

When I first saw the “reveal” photos of this set, I wasn’t convinced by the use of the large wedges to create the flared effect on the round towers. However, in-the-brick these look really good and I think they were a good solution for the complex tapering cylinder shape. 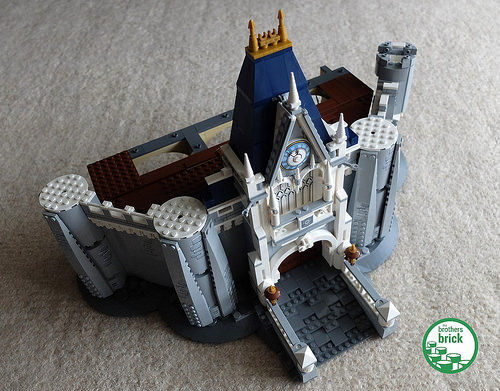 The technique used for the windows at the top of the round towers is interesting, with a bunch of angled building, and it requires paying careful attention to the instructions. However, this is one of those phases where you end up building the same thing over and over — your admiration for the clever technique may pall by the third time you’re putting it together. 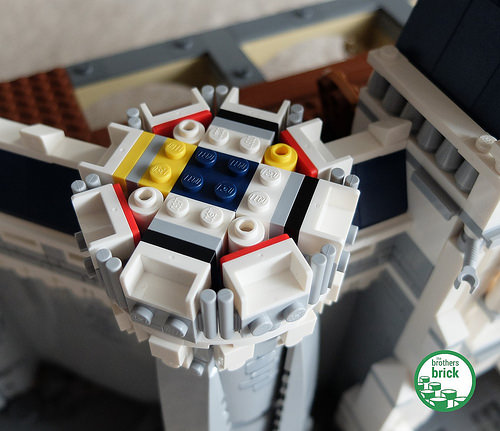 By now, you’ve been building for around four hours. That’s a lengthy period, but there’s a genuine sense of achievement as you complete the lower section of the model. It all looks great, particularly the detailed gatehouse and the clock nestling in the eaves of the roof… 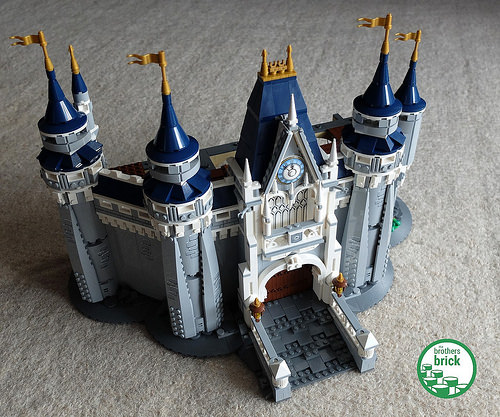 You spend the next couple of hours building the castle’s central keep. It has less off-the-grid elements than the lower section, and as a result the structural elements are generally less interesting to build than those in the previous phase. 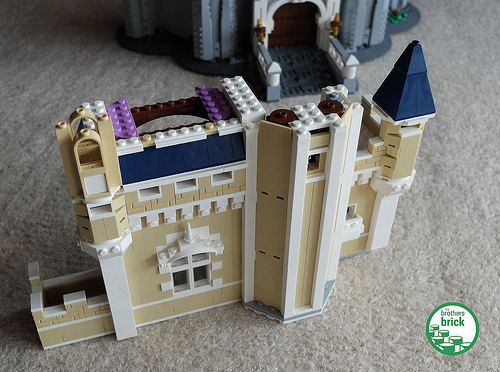 However, the more everyday building process is compensated for with the fun to be had in putting together the detailed interior. The castle contains various different rooms, each with elements taken from classic Disney movies. 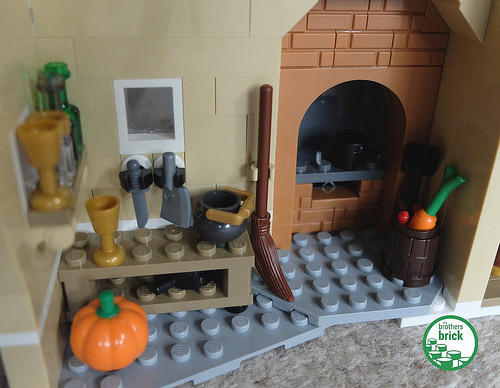 The kitchen, apparently inspired by The Little Mermaid, looks great and has some nice touches, but is perhaps the weakest of the movie-themed “Easter Eggs”. It doesn’t contain much to link it to the film. It might have been good to have included a little red crab, evoking the scene where Sebastian escapes the chef? 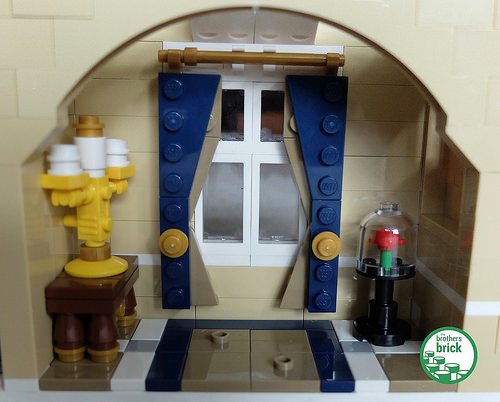 The Beauty and the Beast hallway is perhaps my favourite of the interior spaces, despite it being relatively simple in layout. The rose in the jar is nicely done, and Lumiere the dancing candlestick is a wonderful little model.

Other rooms include a bedroom, an attic, a tower room featuring the Magic Mirror, and a smaller area with a spinning wheel. Overall, the interior is visually interesting and fun to put together. The rooms provide some good play features once the set is complete — a nice touch for younger kids who couldn’t be involved in the complex build itself.

The angled balcony provides the most noteworthy building technique in this section. There’s a smart mix of Technic, regular bricks, and brackets used to create the octagon shape…

So after six hours, you’ve completed the central keep, including the ornate window and the distinctive Mansard-style roof… 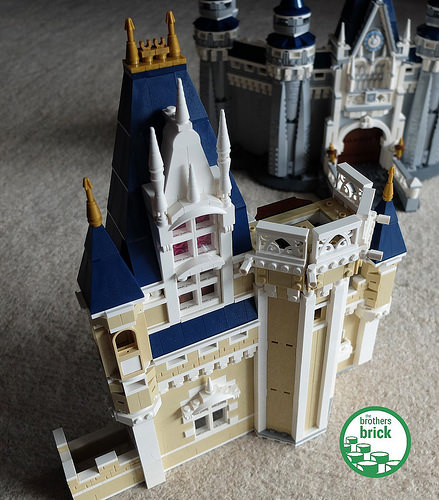 The final element is the addition of the tall central tower. This is split into two construction stages, and features some intricate detailing and one piece of very clever upside-down building for the base of the side-mounted tower near the pinnacle. 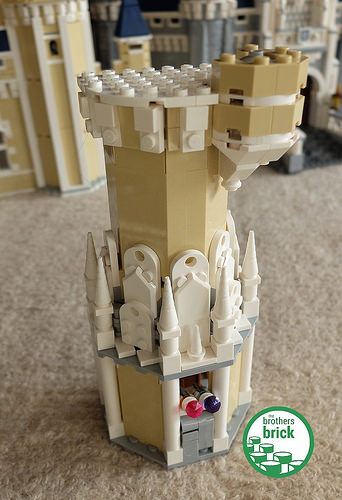 The golden spire at the tower’s tip involves sideways building using pearl gold 1×1 round plates and dark tan bricks — not the most obvious of color combinations, yet it works out nicely and the shape is a good approximation of the original. 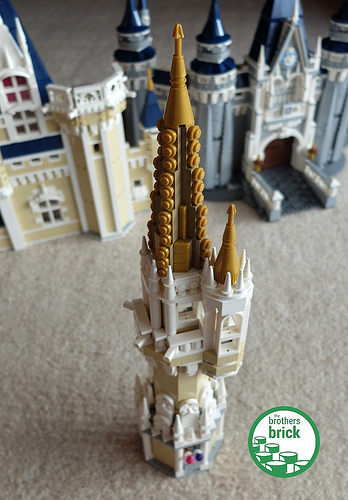 All-in-all, the build is great fun and features smart and complex techniques — some of which I was surprised to see in an official set. I’m pretty sure a couple of things in here are on the borderline of what LEGO would consider as “legal” connections. The construction process also features moments you only get in the best LEGO sets — when something looks odd and you can’t work out why it’s built like that, and then at a later stage all becomes clear and the peculiar arrangement becomes a key support or enabler of a brilliant feature.

Having said that, although it’s an enjoyable experience, don’t underestimate how long the build will take. I had to split it over several days due to “real world” work and needing decent light for photos, however in total it still took me around seven hours to complete the model.

The Final Model
Make no mistake, the completed castle is beautiful. And enormous. It stands 75cm high and 47cm wide. You’ll want to display it, no doubt about it — but are you sure you’ve got a space big enough?! 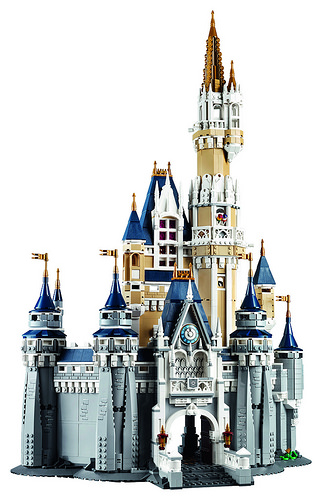 There are minor things which irk me about the final model. The interior has a couple of ugly “behind the scenes” elements on display — Technic bricks and pins which could easily have been covered up. And there’s a panel featuring three shields which wobble and spin when they could have been mounted in a fixed position. However, that’s nitpicking at an otherwise beautifully-designed set.

Some Disney fans have questioned the color choices for the central keep, and it’s true, the Floridian original is an off-white shade rather than the tan and white version we get here. However, an all-white build would have seen the ornate detail disappearing into the background — a shame considering the effort which has gone into designing it, and you will put into building it. Tan seems like a good solution, and ensures the attention to detail in this striking model can be seen properly, even at a distance.

The Minifigs
The set includes five minifigs: Mickey, Minnie, Donald, Daisy, and Tinkerbell. I think they’re great additions to the set, but your mileage will vary according to your attitude to these characters. I’m sure there will be people who would rather have seen a range of Disney Princesses, or perhaps classic movie characters linked to the “Easter Egg” scenes, but I’m very happy with Mickey & Co. 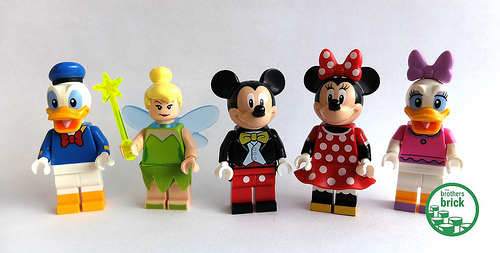 The Parts Selection
This set contains A LOT OF LEGO. Seriously, it’s big enough to start a decent LEGO collection from scratch — just add a small Creator box of basic bricks and some wheels and you’re well on your way to having all you need. This is much more the case with this set than with other big sets in LEGO’s range — if you’ve ever bought a massive Star Wars set and thought “that’s a lot of gray plates” then you’ll know what I mean.

As I was working my way through the construction process, I spotted a few pieces I thought were new or notable… 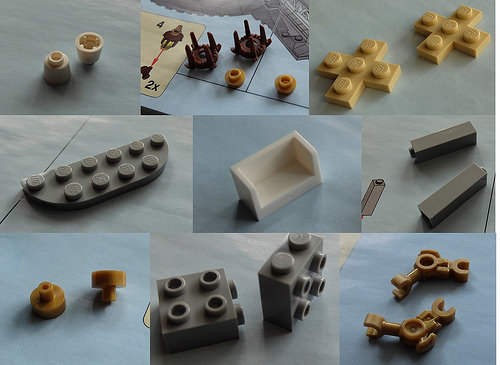 But my favorite piece in the entire set has to be this supercute book. I’m not going to suggest the set is worth buying just to get hold of this, but it’s a close-run thing…

The Brothers Brick Verdict
71040 Cinderella’s Castle is a wonderful LEGO set. It isn’t cheap, but for the price you get an immense quantity of bricks for you or your kids to play with if you ever tire of having the castle on display. The building process is long, but thoroughly enjoyable, and regardless of your level of experience you’re going to learn some nice new tricks and building techniques.

Overall, the resemblance to the Disney original is amazing and the set design represents an affectionate tribute to a much-loved icon of Walt Disney World. If you like castles, or Disney, or just enjoy building a big set, then you simply have to get yourself one of these — just don’t underestimate how long it’s going to take you to put it together!