When Ana Amari was revealed as an addition to the Overwatch hero roster, I knew I wanted her rifle added to my LEGO arsenal. It was an interesting short rifle design, had bolt action that would be fun to build, and even the concept of a healing sniper was a rad idea. The most challenging part of the build was the bolt action itself. There were countless iterations of the bolt itself that can simulate chambering the biotic round, the chamber walls hiding the bolt’s slots inside the body of the rifle to reduce gaps, and the trigger mechanism that released the bolt. All this design work led to a LEGO rifle that has realistic looking firing action, despite not actually firing. 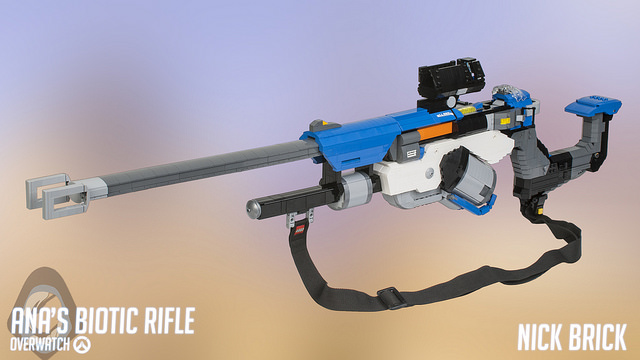 Watch this firing action, as well as other functions including a folding stock, removable magazine with opening mag cover, and glowing biotic round powered by BrickStuff lights, in the video below. You can also view all photos of the biotic rifle in my Flickr album.